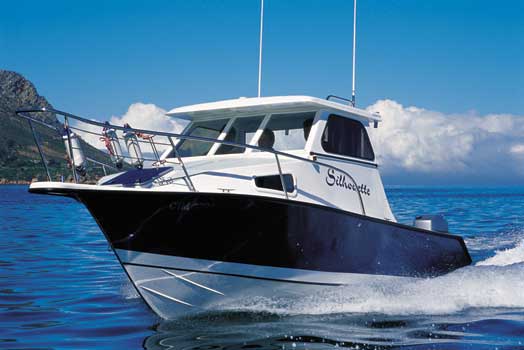 A craft in its final stages of being fitted-out caught my eye. Her lines were familiar, but at that stage I didn’t spend too much time trying to figure out what she reminded me of. She was neat, very stylish and definitely a craft that would both catch one’s eye and hold one’s attention.
That was early last year and I was at AquaMall in The Strand, Somerset West, where, unbeknown to me, Chris Teer was in the process of developing a new 24-footer. That was my introduction to the Vision 24.

Only a few months later I arranged to get to Cape Town to review this craft — and I am pleased I made the effort. After just a few minutes behind the wheel, I realised what the craft was reminiscent of. Her ride, her style, her take-off, her flat trajectory at speed across the ocean: of course — she was reminiscent of the Billfish 22. “Right,” remarked Chris, “she’s got a very modified hull — but she’s based on the Billfish 22.”

Chris’s philosophy is “if it’s not broken, don’t fix it”: if a boat works well, don’t try and reinvent the hull every time modification and modernisation are required. In all his craft, especially the SkiCraft 16’6” walk-thru which I also played with, it’s been mainly top deck modification — including finishes and extras — since the first of this model Chris produced.

In line with this way of thinking, when Chris decided that he needed a 24ft trailerable craft with a full cabin, suitable for targeting tuna 40 miles off Cape Point, he drew on the expertise and experience of the Billfish 22 which is a well-proven fishing machine in this aspect of offshore deep sea angling.

The plans were drawn, the plug made and tested, and the first Vision 24 was pulled from the mould, resulting in the almost finished craft I saw at AquaMall.

Eventually, the finished craft, Silhouette, owned by Hennie Ferreira, was launched from the slipway at Harbour Island, and my first sight of her on this trip was as she came across the bay at full taps towards Chris and I. We were just leaving Gordon’s Bay harbour on another new craft Chris has developed — the AquaScape 19, but more about this boat later in this issue.

The Vision 24 came at speed, seeming to glide over the north-westerly chopped-up sea as if it were but a lake. There is nothing more awesome and captivating as seeing a big, high-speed craft bearing down on one. Indeed, it was incredible: the energy of the bow cleaving the choppy water, the shoulders knocking away the generated bow wake, the spray being spread wide and far, the sound of the hull on the water and the high-pitched drone of high-revving, big 115hp Mariner outboards made me itch to get aboard her.

The Vision 24 is a deep-vee of note, and I love deep-vee’s — my own boat is such a craft. But I made a monkey of myself during my first few moments behind her wheel. I was so anxious to feel her performance that I screwed up the settings of the hydraulic trim-tabs (afterplaners) and the motor trim position. I could see from Hennie’s face that he was wincing at my handling of his craft, but he had the courtesy to say nothing. 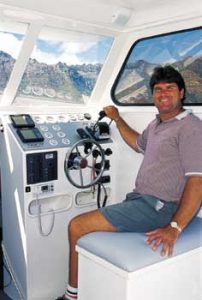 So I went back to the basics — get the feel of the craft, gradually increase momentum and gauge the effect of the four variable trimming devices. I also had to remember that the switches for the hydraulic planers were opposite to the ones on my boat. The Mariners’ trim is in the form of two little levers on the port throttle working backwards and forwards, unlike the up-down switches on each throttle lever on my boat. Eventually I got it right and Hennie and his crew began to relax, as did I, as the Vision with four of us aboard headed across False Bay into the prevailing north-westerly.

It was during this run and at this speed that she came out of the hole and took a very prone riding position which brought back the memories of Billfish 22 tests I did so many years ago. She rode the chop beautifully as we maintained a 20-knot SOG with the rev counter sitting at 3 000 rpm.

Hennie is not only a very accomplished bottomfisherman — I have seen his pics of good hauls of geelbek and snoek — but he also hunts tuna far off Cape Point. He told me it’s over 100km from Gordon’s Bay to the tuna grounds, so to see how the craft rode and how he handled his own boat, I asked him to pick up his waypoint and ride as if he was going to run the 100km in the conditions we were experiencing. With the course set on his GPS and the sea on the aft starboard quarter, we commenced our trip.

In that sea he set the throttle at 3500 rpm, trimmed the craft to his liking and we set off. The ride was both comfortable and sustainable for the two-hour trip it would take to get to the tuna grounds at 23/25 knots SOG. Hennie knows his craft well, knows how to get the best from her, and handles her with great feeling.

After about 8km I once again took the wheel and, now confident with the Vision 24, commenced to see how she handled the sea at all angles. Whether you’re heading into the sea, with the sea or quartering, she runs beautifully, providing a soft ride at reasonably fast speeds.
As with all deep-vee craft that have no pronounced shoulder, one has to get used to the ride in a following sea.

These type of craft — and the Vision 24 is no different — do not hold back when running a following sea and one gets the initial impression the craft is running away with one. However, once one has learnt to skipper under these circumstances and have trimmed her to ride slightly bow-high, she is a dream to skipper.

On my boat, if there is a very steep following sea, I flood my fish-box to add weight aft and lower the craft’s centre of gravity. Hennie does exactly the same, but says he prefers it when his hatch is full of tuna.

In the awkward sea that was prevailing — and way beyond the protection of any mountains — I put her through a series of trolling trials, including slow livebait speed, running on only one motor, rapala speed and, naturally, at speeds to pull big plastics for marlin. With superstructures such as the Vision 24, windage is always a problem during a very slow troll, but with a side-on sea or by quartering the sea I could keep her on a straight and steady course. Faster trolling with two motors produced steady momentum, a good wake, only the occasional thump and very little spray over the fish deck.

The problem most deep-vee boats have is that they rock-’n-roll whilst on the drift or at anchor. In order to stabilise her under these conditions, Chris has increased the “gullwing” effect on the outer panel of the hull, especially towards the aft of the craft. Not only does it achieve the desired result, but it also improves the direction or tracking performance of the hull over the water.

The next test was to see whether she was able to back up. I had seen Hennie handling her in windy conditions in the Harbour Island mooring and was impressed at the way this big craft, with a lot of windage, was made to do as he wanted. When I began to back up into the sea, I employed his technique of using quick bursts of power in forward and reverse. This proved most successful at getting her to turn while theoretically following a big fish. Thanks, Hennie, you taught me something new.

Now that ever bigger boats are being used for surf work, like off Sodwana and the Moçambique coast, I needed to throw the Vision 24 into some extremely tight turns at speed and judge her ability during the pull-out and out-of-the-hole acceleration. Tight turns on a deep-vee panic most crew — and skippers, for that matter — but if you accept the lean into the turn, it’s incredible how tight the turn can be. The Vision 24 did exactly as I’d anticipated, and with her 115 Mariners swinging 20-pitch High Five five-bladed props, getting her onto the plane coming out of the turn was simple and there was no cavitation.

Hennie wanted a fishing boat that would be practical, but also a craft he could fairly easily make very comfortable for pleasure boating. When I reviewed her she was rigged for comfort with an upholstered seat stretching across the inside of the transom, and a neat “hospitality” table in the place of a fighting chair. 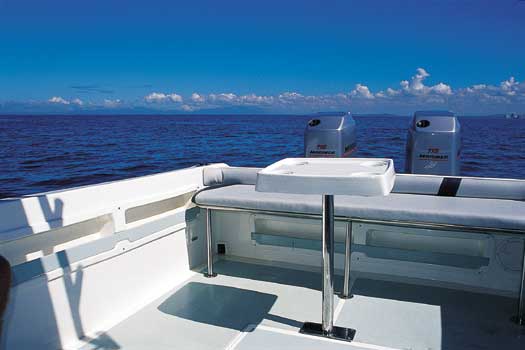 The fish-hatch, which was forward in the big, open cockpit area, was flush with the deck. When Hennnie goes fishing, he removes the drinks table, the back seat and the flush fish-hatch lids, and on goes a big coffin hatch in its place, thereby more than doubling his fish-hold capacity. With no back seat, access to the trolling boards is easy and one can fight fish bracing oneself against the nice, high transom.

The cabin, which can be completely closed off by a concertina-type aluminium-and-glass door, is big and spacious, easily protecting her normal six-man crew from the elements.
The skipper’s domain is comfortable and well designed to provide good view of and easy access to all the instruments and gauges. 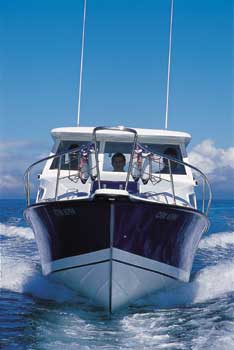 Silhouette has been on the water for quite a few months, but even though she has seen a lot of fish pulled over her gunnels, she is in immaculate condition which not only shows Hennie’s “Mr Min” attitude to his craft, but also the quality of finishes put into the working areas of the boat.
As with all craft sold by AquaMall, Chris Teer sets a high standard for his factory to achieve. On the Vision 24 I reviewed, they had done a very good job: not only was she neatly finished off, but all the fittings and extras were robust, practical and well positioned. Indeed, there can be nothing worse than skippering a big craft in reasonably heavy seas and being surrounded by rattles or having “designer” bits and pieces coming adrift. Yes, the Vision 24 not only looks beautiful, she feels beautiful and solid and has, in Hennie’s words, proved herself as an extremely practical fishing machine.

Perhaps with age comes more sense, and in my case I find myself enjoying the creature comforts of these larger ski-boat-type craft more and more. While still being trailerable, they offer a sportfisherman many more options to enjoy his boat while pursuing his sport. They also allow his family and friends, those who do not fish, to derive pleasure from the investment.

In boating terms, the Cape has a lot more to offer than the rest of the country — from chasing big yellowfin to catching elf in the bay, dropping nets for crayfish or just enjoying an evening cruise with friends. Yes, when it comes to being able to really enjoy one’s boat, this part of the country certainly has its advantages. Cruising Cape waters at the helm of the Vision 24, you feel a part of it and just don’t want to go home.