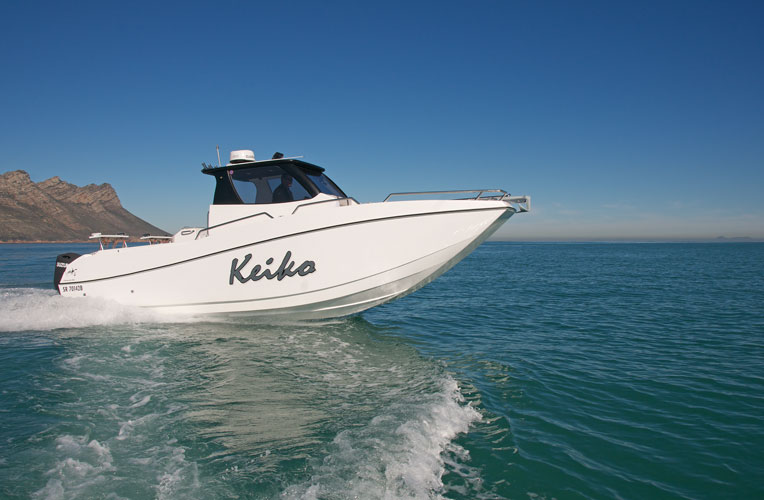 THE Cape Winter weather was my greatest concern while I was busy arranging to review X-boats’ 28-foot Walk Around sportfishing craft. I was enormously relieved as we banked in over False Bay to land at Cape Town International Airport and I saw that the sea was calm and the sun shining brightly. A light dusting of snow on the surrounding mountaintops add a chill factor to the scenario.
Ben Lochner, managing director of High and Dry Boat Lifts, the holding company of X-Boats which manufactures the 28ft sportfisher, collected me from the airport and enroute to the factory in the Strand he briefed me on the company’s history.

Armed with a mechanical engineering degree and many years experience in the luxury boat building industry in South Africa, Ben took what he’d learned and opened a boat building factory of his own.
Until recently he’s relied almost entirely on the export market — Australia for his outboard-powered X-Boats of which the X-28 Walk Around is the flagship, and America for the High and Dry boat lifts he has designed and patented. However, recently incidental local demand for both these products has convinced Ben and his company to expose themselves more widely in South Africa and other sub-Saharan countries. Hence my invitation to review the X-28 Walk Around out of Harbour Island in the waters of False Bay.
I defy any offshore boater to walk into X-Boats’ factory and not be visually struck by the size of the X-28’s hull as I was when I saw it being prepped to have the top deck attached.

My time at the factory gave me an opportunity me to see the below-deck design of the X-28 and gave Ben a chance to better explain how he lays up the hull and strengthens it, obtains the required buoyancy levels, and even his method of laying up the glass fibre in the mould. It was all extremely interesting and gave me a new perspective in preparation for playing with it out on the ocean. 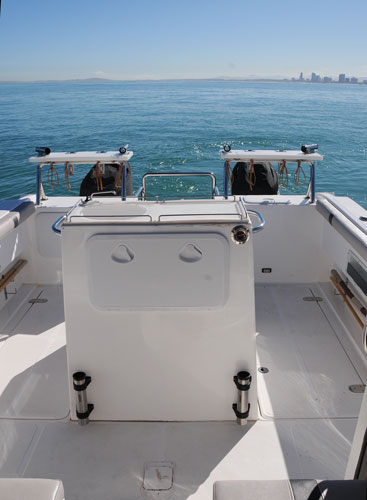 From the word go the influence derived from building multi-million rand luxury sailing craft is very evident in what Ben is currently doing — laying the “foundations” for yet another X-28 Walk Around.
When she’s “high and dry” on her boat lift at one of Harbour Islands finger moorings one can see the entire craft in all its glory. She surely is beautiful with strong lateral lines and an interesting tunnel configuration that is very different to most of the other large catamarans I have reviewed. I had listened to the theory from Ben and was keen to get her out on “The Bay” to see how all this theory turned out in practice.
Upfront I noticed the craft had a cross tunnel foil at its centre of gravity and two aft short foils. I have extensively tested the big T-Craft that had foils so had an open mind regarding their use and reported efficiencies. For those that are skeptical and those who would want to launch such a craft off the beach, you can opt not to have the foils fitted. One of these craft which is under construction is intended for use along the Kwa-Zulu Natal coast, and the buyer opted to go without the foils. Hopefully the new owner will permit me to try her out off Durban in the near future.

I have been told that the only performance difference which is not really appreciated during general boating use is that during long distance planing the lift generated by the foils reduces the craft’s wetted area which increases speed over water with less throttle, thereby reducing fuel consumption.
Finally the moment arrived … With the flick of a switch Ben started the pumps on the High and Dry boatlift’s auxiliary box and the boatlift began to subside. Not one minute later the switch was turned off and the pumps stopped but the boat lift continued to sink slowly. Four minutes later I stepped aboard the X-28 Walk Around ready to start the motors and back her off into the channel.

For those who don’t know how the boat lift works, when the pumps were switched off the syphons in each pontoon had already been activated and gravity took over, replacing air with water. While the High and Dry boat lift was submerging the side support boxes are cunningly manufactured to provide steps with non-slip treads for those boarding the craft at any stage while it’s being lowered or raised.
As we meandered through the Harbour Island channels I thought back to the early days when Tony de la Fontaine, the developer of Harbour Island, and I watch as the initial rock work commenced to create this magnificent marina development.

Slipping through the harbour entrance my thoughts were dragged back to the present as I took control of the helm of this amazing craft. After passing the two channel marker buoys it was time to give it gas and feel the twin 200hp Suzuki APL four-cylinder four-stroke outboard motors thrust her up and onto the plane.
The short but fast trip across to Gordans Bay harbour was but a taste of things to come, for once we met up with the photo boat I was relegated to the scuppers so to speak.
Being on the smaller 16ft monohull photoboat enabled me to view the X-28 Walk Around from every angle at speeds ranging from zero to full bore as she thundered past us.
As I expected, her ride profile, especially at high speed was very static in trajectory after climbing onto the plane. As I later ascertained when driving the craft myself, she starts riding on the foils and virtually disregards any attempts made to vary her trim using the motors.
Her A-symmetrical hull design is unusual in that most cats have a symmetrical hull design, but it worked brilliantly, cleaving the water outwards with minimal turbulence within the confines if the craft’s tunnel. Look carefully at the accompanying photograph of the X-28 coming straight towards the camera and you’ll see what I mean. 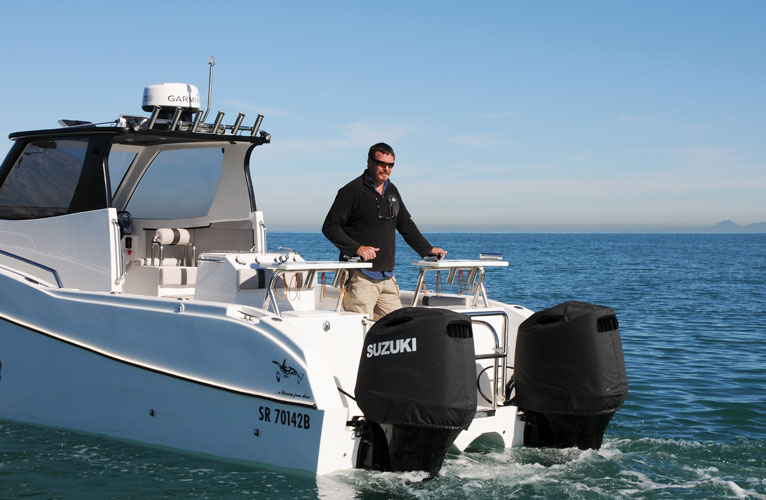 With symmetrical hulls the cleaved water exits almost identically on both sides of the hull, thereby building up a conflicting mound of water and foam in the tunnel. This can then increase that craft’s wetted area which means you need more horsepower from the motors to achieve the same speed.
Back onboard the X-28 I was able to feel the craft’s hull-over-water performance and correlate that with what I had seen from the other boat.
The twin Suzuki DF200 APL outboards with fly-by-wire controls were swinging four-bladed 154 X 22 pitch stainless steel props and made this 28ft craft’s out-the-hole performance superb. Once she was on the plane riding the “foils” it was an experience second to none.
I commenced my boat review routine by trimming in the twin Suzukis as much as possible and very gradually working up the speed until she just got onto the plane at around 17 knots. That way I could figure out what I call the “sweet trim” and could also appreciate the very moment the main foil came into play doing what it’s designed to do — skim across the water’s surface.
Taking into account that the motors were spinning counter-rotating props, I then judged what the sweet spot was with regard to optimal speed in knots, motor revs and the fuel consumption indicated on the gauges. This was just over 20 knots at 3 800 rpm at a fuel consumption of 15 litres per hour for both motors. 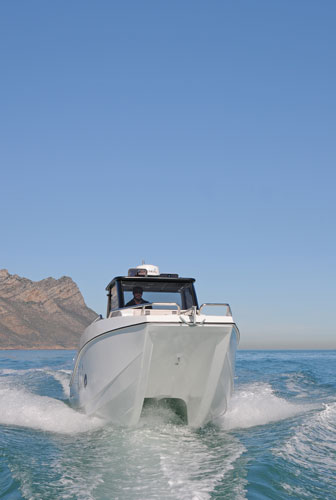 Setting a course directed at Cape Point I maintained these settings for a considerable distance to experience the stability of the ride, the noise levels within the confines of the wheelhouse and the smooth flow of the craft over the water. What a pleasure — a beautiful experience.
The sea surface was only ruffled by a 5-8 knot wind and a moderate swell, but I enhanced this by using the craft’s own wake when I put her through the range of working speeds, ie; slow troll, Rapala speed, sailfishing and marlin trolling. Her wake is tight right up to 9 knots at which stage it starts to spread and she maintains a consistent SOW regardless of the sea conditions I was able to make for myself.
It was particularly interesting when I put her through her paces in about three metres of water outside the entrance to Harbour Island where the swell was bouncing up over the shallow reef. This big craft responds very promptly to the helm in very tight turns, aided by the correct use of the throttles, and pulls out of the turn smoothly, getting up onto the plane in plenty of time to crest an approaching wave on her forward quarter.

I also emulated taking on a point break a great number of times — as if surf launching at a venue such as Sodwana Bay — to satisfy myself that I perceived no problems with the X-28 taking on a surf launch.
Whilst she boasts a top speed of 40 knots at maximum revs with a crew of two and about 100 litres of fuel aboard and gets onto the plane with one motor tilted right up, my “happy speed” is beteeen 17 and 30 knots — happy for me and all the crew aboard.
Having seen Ben’s moulds and the incredible effort he puts into ensuring that the end product is as perfect as it can be, I was not surprised to see that the eight month old craft I took to sea was so beautifully finished. Aside from the actual hull and single moulded top deck, it was the extent to which the final finishes were perfectly designed and user friendly that really impressed me.
On a craft of this size and class one expects nothing but the best, and Ben and his team at High and Dry Boat Lifts have certainly done the X-28 proud.
The Australian market demands multi-purpose craft to suit both the dedicated anglers and those who want to use the craft for leisure, and over the last decade the X-28 Walk Around has been perfected to provide just that. 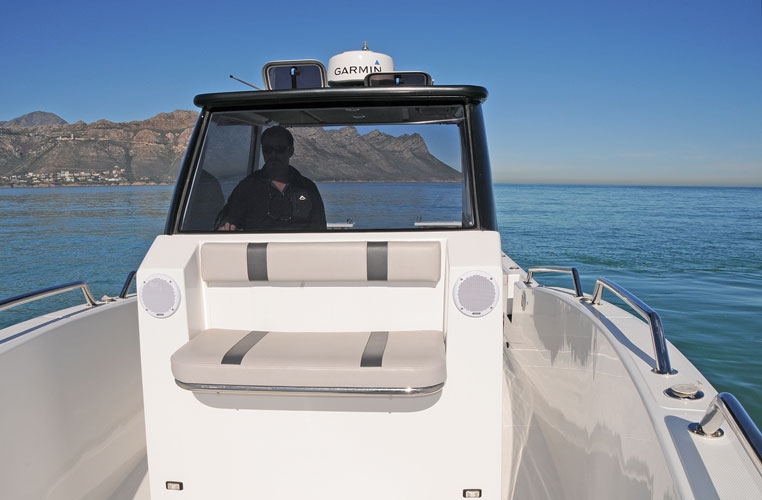 The substantial and comfortable cabin provide all the protection needed on a trip to the deep in inclement weather, while the wide walkway to the forward deck is ideal for both fishing and leisure use.
The helm station itself is very comfortable with a well-cushioned “bumrest” and plenty of space to drive the boat in comfort and to see and use all the electronics fitted to this craft.
An example of the thought that has gone into this craft’s cabin design is the hinged and darkened perspex door to the forward cabin/toilet area. The novel hinging and top locking system is fantastic. On most boats the general catches never seem to close properly or are shaken loose in rough seas — that won’t happen on the X-28.

The “fish deck” is also thoughtfully designed and will be especially practical for those who target big tuna off the Cape coast. Not only has it got large under-deck fish hatches, but it also has two 200 litre stainless steel built-in fuel tanks. Those who fight big tuna whilst buckled into a Black Magic stand-up harness will find her layout very practical.

The accompany photographs show the deck layout, the centre above deck hatches, bait preparation surfaces,wash basin as well as an aft-facing seat which will suit both fisherman and party guests.
Whilst I can not possibly do justice to the design and build of this craft in the space at my disposal, rest assured that everything aboard this craft is of the highest order.
I played with her, worked her hard and tried to find fault but have resigned myself to being totally enamoured with the X-28 Walk Around.