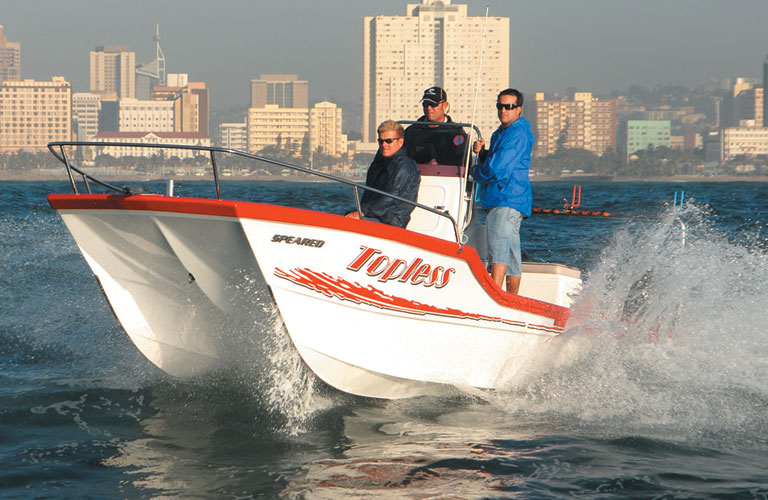 DURBAN locals Natal Power Boats recently mentioned that they had added a new boat to their range — a 625 cat of sorts. Well, when it arrived at The Natal Rod And Reel Club in Durban for the test it was one of those where you think “Hmmm, that’s interesting …”

GENERAL IMPRESSION
They say that first impressions are critical, and if that’s the case then there would definitely been a problem with the Spearfisher 625, particularly for people who are used to standard looks on boats. When the 625 arrived my attention was immediately ripped away from the other boat being tested and it was one of those scenarios where you think “What the hell is this thing?” That was until I edged up to it for a closer inspection and in a split second realised why and what it had been designed for. It’s first and foremost a custom-built spear-fishing craft. Taking into account my spearfishing background, I thought this boat’s design was nice, really nice!

CONDITIONS
For a change we didn’t experience the standard winter conditions of perfect seas and offshore winds. Instead the ocean off Durban was like an extremely grumpy summer’s day with a north-easterly wind and swell that had prevailed overnight. Conditions like these were going to be very challenging for any craft. 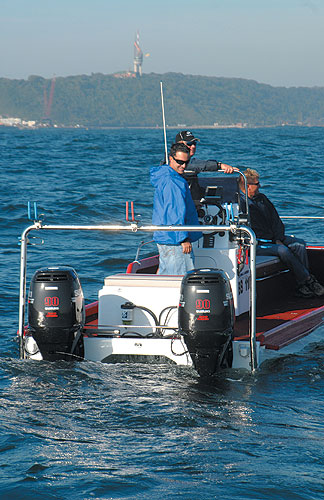 LAUNCHING AND TRAILERING
Launching a boat from a sheltered slipway is generally a simple task, and the Spearfisher 625 was no exception. Coming standard on a galvanised breakneck trailer the task of launching and trailering her was simple.

MOTORS AND CONTROLS
As tested the Spearfisher 625 was fitted with twin 90hp Suzuki four-strokes which I felt was a bit over-powered for the boat. It had hydraulic steering and standard Suzuki controls which made for a smooth operating combination.

PERFORMANCE
Although I had figured out the design of the 625, I couldn’t wait to find out how this boat was going to perform with the cut down gunnels toward the stern and a standard bow that looked different. The terrible sea conditions would also make things interesting.
To begin with it was quite something to drive a craft with little to no gunnels in the stern, and it left me feeling like I was on an old Ski-vee from nineteen-long-ago. As we cruised out of Durban harbour the swell and wind pumped through the channel, creating quite a mess that we bashed our way through. I think between Nick Lanzanakis and Heinrich Kleyn (the new man at SKI-BOAT) we were all quite surprised with the way the Spearfisher 625 basically ate up the ocean as we headed offshore of Durban.
The ride into the mongrel north-easter and swell was really soft and stable, with minimal spray coming over the bow. Creating this ride was fairly simple, with me just taking a bit of time tweaking the trims on the 90hp Suzuki four-strokes to add bow lift to suit the conditions. It turned out the power from these motors was actually well matched to this craft.
A standard speed for these conditions on most craft of this size would probably be between 10 and 12 knots, realistically, without killing yourself. Not that speed is of the essence, but on the 625 I could quite easily run at a consistent speed of 15 knots into the wind and swell. That alone speaks volumes.
Heading side-on to the chop and swell again she handled well with higher comfortable speeds being attained. I was expecting to get saturated, but was very wrong. The only time I came close to getting wet was when wash came over the transom, and that’s only because the 625 has cut down gunnels in the stern, and no built-up splash well. A low false transom could be easily be added on to prevent this, if you prefer.
Running the 625 with the solid two metre swell and wind from the north-east it was again easy to maintain a comfortable ride when dropping in and out of the troughs.
After thumping the Spearfisher 625 around the ocean at high speed, I then put it through some surf simulation tests of full locking, powering in and out of the hole, as well as tight turns at higher speeds. The result? Well, suffice it to say that I would be quite happy to put it through a niggly launch at Umkomaas, and if you happened to get a hiding in the surf on this boat the water would just flow straight out the back. 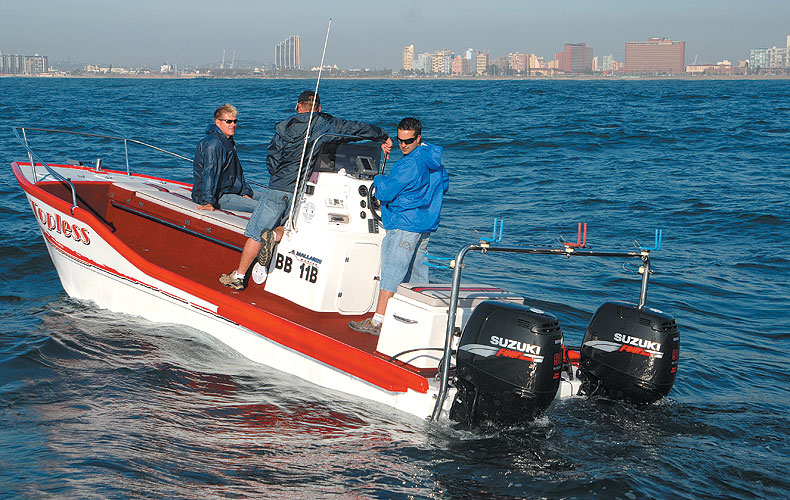 LAYOUT
As previously mentioned I was initially quite surprised at the design of the Spearfisher 625 until I figured out the boat’s primary purpose — spearfishing. The layout is somewhat different to most of the craft around, and the gunnels taper away to a flat transom area in the stern. The reason for that is obviously to simplify access into the boat from the water.
The deck area was also quite unique, as medium density foam had been laid throughout and was topped with Flotex carpeting. It felt comfortable enough to have a snooze on. Other fittings in the stern included a stainless steel roll bar and fair sized raised fuel/stowage hatch that also serves as a seating area.
The centre console has ample space for all the electrics, has stowage space inside, and is finished off with a wraparound windscreen and stainless steel grab-rail.
The next unusual part of this layout was the centre hatch system that runs from the console right through to the bow. This area is raised and has padded seating and grabrails on the sides. Inside this hatch you have separate sections for spear guns as well as ample area to lay long fish like large wahoo and king mackerel. For a change you won’t have to fold them in half.
The bow has standard anchor hatches and a wrap around stainless bowrail.

SPEARFISHING
Although the Spearfisher 625 may look slightly odd, it has been customised to suit spearfishing, and I have to say that it is very well suited to that application. The 625 is stable with extremely easy access into it from the water. There’s plenty of open space, and a well thought out hatch system for gear and fish.
For spearfishermen that’s really all you need as far as the boat’s fishability is concerned — then it’s all up to your ability in the water.

GENERAL OFFSHORE FISHING
This is certainly a different configuration for a deep sea fishing boat, but I still ran a few standard troll speed tests and checked the roll when drifting. Throughout all the tests the handling was good and comfortable. The only thing you might have to do is keep unnecessary weight off the stern when you’re drifting. 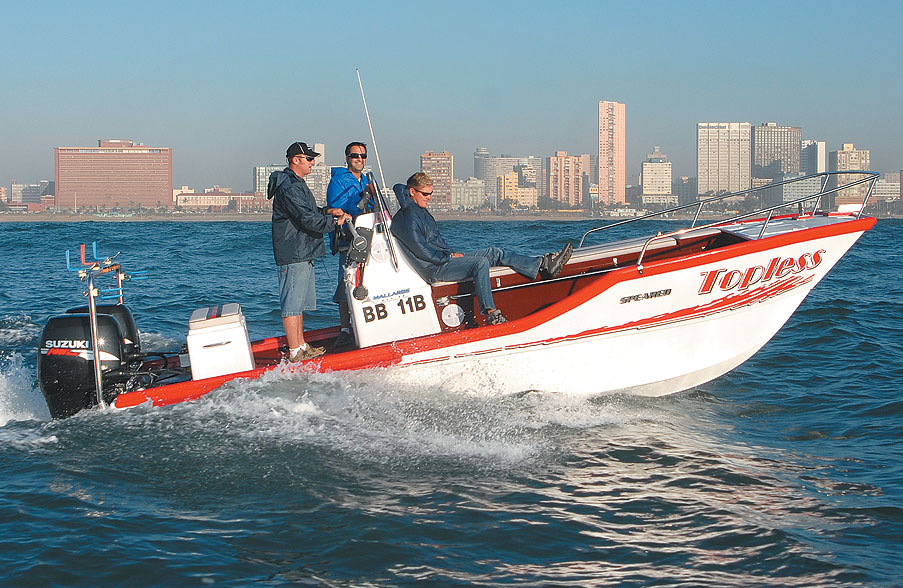 FINISH
Being a customised boat everything on this Spearfisher 625 was precisely fine-tuned and fitted which added to the already good finish on the boat.

CONCLUSION
As a spearfisherman — now an ex-spearo — I spent many hours at sea on many different types of craft that we used mainly for spearfishing, and I only wish we’d had a boat like this for our offshore adventures. The comfort and layout for spearfishing is something else, and the Spearfisher 625 can be used for other fishing applications too.
I have never seen any other craft designed like this one, and for now the Spearfisher 625 definitely gets my approval.