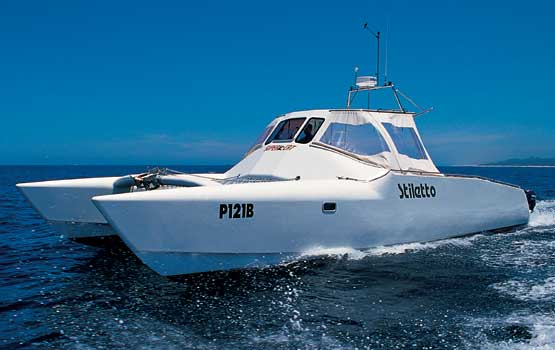 An eleven metre craft that does 20 knots with a pair of 50hp four-stroke outboards? Pour me another Captain, Dennis, and I’ll listen to your story again…

That was my unkind view when Dennis Schultz of SuperCat Marine phoned me some months ago. No doubt he detected the scepticism, so he asked me to make the trip to Port Alfred and review his new craft, christened Stiletto.

I have known Dennis for nigh on 20 years and should have listened a little more carefully when he was telling his story about “eleven metres and 20 knots with a pair of 50hp motors”. Dennis, the most innovative of all South African boat-builders, had the guts to try various designs and techniques until he came up with something very different in the boating game.

So it was, after much thought, that I arranged to see Dennis’s new craft. Yes, curiosity had finally got the better of me.

Prior to going to the Halyards Marina within the Port Alfred Marina, I was shown a video of the Bitech Motor-Sailor Dennis had designed and made (see SKI-BOAT Sept/Oct 1995). In fact, he had taken her on two extended cruises from Port Alfred to the Bazaruto Archipelago off Moçambique.

Then Dennis told me that he was using the design features of the Bitech, and its displacement characteristics, to maximise speed with low hp thrust and consequent very low fuel consumption.
To qualify this, I’ll try give a very broad, short explanation of displacement-versus-planing hulls: With displacement, the hull floats with its power source pushing it through the water, while the hull retains its same or very similar wetted area. A planing hull, however, uses a lot of power to get a craft out of the water in which it is floating, thereby reducing its wetted area.

In essence, a planing hull is continually being pushed “uphill” by its motors to retain its planing ability and hence speed. A displacement hull, however, uses the motor’s thrust to push it through the water. This means that the sleeker the hull and the lower the wetted area, the faster the craft should glide though the water. Elementary, my dear Watson!

Dennis has taken the hulls of the Bitech — which he tried extensively during the two long sea voyages in some terrible seas — and modified them, the deck structure and motor configuration to produce a sportfishing boat with some very unique characteristics.
Right, I was finally ready to see Stiletto and take her to sea. With the big swell that was running at Port Alfred and the tide almost at spring low, the mouth of the Kowie was going to be interesting. 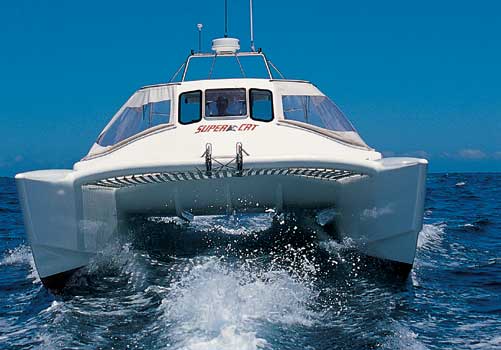 And, yes, it was very interesting indeed as the eleven metre craft approached the mouth. There was no way to turn in a hurry — in fact there was no way we could turn at all with the sandbank that was hugging the east pier. It was either take it on the bow or reverse out of trouble — and pray that a big set wouldn’t turn us side-on.

Interesting, very, very interesting … “Keep her straight,” Dennis instructed. “Don’t use speed, the hull will do the work.” Ja, well, no, fine … it’s not so easy when a two metre-plus wave is bearing down on you, followed by a few bigger ones.

I watched dry-mouthed as the long forward sponsons were enveloped by churning, white water. I kept the throttles at half power as the wave boiled past us, the water running off the rounded sponsons as they surfaced. Strange — the craft didn’t seem to reach for the sky which is what would happen in a ski-boat, and we were moving forward to meet the already curling backline.
I wanted to jam the throttles forward, but Dennis talked me out of it. The backline loomed and the sponson cut into it and — without a jolt — we were through the worst! Only then was I allowed to increase speed.

What an experience — and we did it twice more that day just to relive it and get the adrenaline flowing!

As Dennis explained, the hull is designed to cut through the water not bounce along the top. Like a yacht, the Stiletto’s hull is rounded and has no straking to cause pounding and drag. Being as long as they are, the hulls ensure that buoyancy is maximised and keep the deck structure high enough above the water to ensure a high tunnel. In most cases, therefore, as the sponsons cut through the water, they are not affected by the chop. Indeed, it really has to be a very big sea before it has any effect on the ceiling of the tunnel and causes both drag and pounding.

Out at sea the craft was put through her paces in a light-to-moderate south-easter which, in that part of the world, blows almost directly onshore. I had to get my mind around the perceived and actual differences of the craft. I then had to judge her on her capabilities in relation to the task she was required to perform as a deep sea fishing platform. 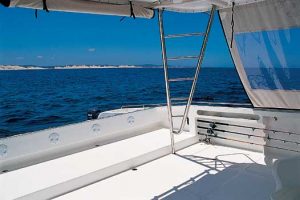 In this regard the major advantages are her deckspace (4,5m x 4,8m), stability, economy and cost. The only downside for big game fishing is that the two aft sponsons protrude by about two metres (including the motors). Manoeuvring a big fish from a fighting chair could be interesting.
However, for light tackle fishing up to 50 lb standup, the small inconvenience of the aft sponsons is greatly outweighed by all her other benefits.

Dennis took umbrage to me calling the craft a “prototype” for, as he correctly said, the Motor-Sailor version has been on the water for about five years, during which she did a lot of sea miles, including the two extensive, three-month Bazaruto trips I mentioned earlier. In his opinion, these proved the worth of the hull and concept. Consequently, the top deck revamp to suit the sportfishing market is the only area of the craft that has been redesigned.

At sea I admit it took me time to become attuned to this new concept. When aboard a craft in the 30/40ft class, I am used to thundering along at 20 knots on a conventional sportfisherman, its bow high, smoke billowing from behind in a churned, white-water wake. The feel of power, the thrust of twin 200hp+++ diesel engines, the scream of turbos and the overall sense of speed has been an integral part of my boating life for many years.

The 38 Sport, on the other hand, is quiet. The twin 50hp Yamahas were barely audible above the light slap of water against the sponsons. There was no bow lift, very little wake and almost disbelief at the feel of the craft’s movement in relation to the sea and the speed shown on the two GPSs that were installed.

It was only when I was aboard the SuperCat 530, photographing the 38 Sport, that I saw how fast she was actually slicing though the water. In the sea that was running, the smaller craft — renowned for her performance over the water — battled to keep up with the bigger boat!

These differences are real and take some getting used to. What I mean is that they take some getting used to in terms of believing what is actually taking place. Indeed, I kept looking at the two Yamaha 50s that seemed so small, perched on the end of the 38ft sponsons, and marvelled at the performance they were achieving. “I just don’t believe it!” I thought to myself and uttered out loud many times during my time at sea aboard Stiletto.

In my mind, the 19ft cutdown version of the 530 SuperCat, powered by a single 50hp Honda, should have raced rings around the 38ft craft, powered with twin 50hp motors. I still find it hard to believe that it couldn’t even keep up! 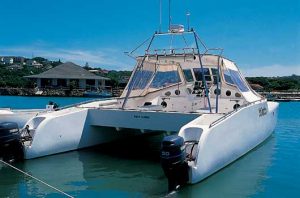 This craft tracks well both at high speeds and on the troll. The latter may not be true in big winds and sea if one is trolling in different directions, although straight into or with the wind must be good, otherwise Dennis would never have reached Moçambique with his Bitech.
On the video I saw some of the seas they encountered on that trip. As that particular craft was powered by twin 27hp Yamaha diesels, if she didn’t track at 8 knots, skipper and crew would never have lived to show the video.

As with all SuperCats, Dennis has put an incredible amount of thought into the detail and finishes of the craft. Indeed, the simplistic overall look is deceiving.

In short, there is a single bunk up forward in each sponson, with limited stowage in this area. Up on the deck — which can be totally enclosed in zipdown screens — and behind the forward glassed console is a huge, 21sqm living-cum-party-cum-fishing area. Rigged out for tropical cruising as a live-aboard craft with a 700 nautical mile range, this craft could take a fishing nut to paradise and allow him and his friends to have a wonderful holiday.

There are many variations to the theme on Dennis’s drawing board. A number of commercial operators in the south-eastern Cape are looking at the boat as it has a three-ton carrying capacity with minimal effect on performance. Another interested party wants a booze-cruise party-boat. The options are numerous and Dennis is known for going to enormous lengths to satisfy customers’ demands. 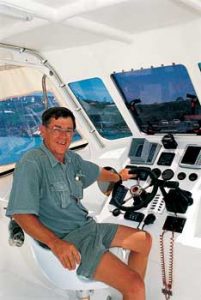 I know I have missed out a lot of the features of the craft — like the twin anchors operated from the skipper’s console, the large trampoline upfront, favoured by the ladies for suntanning, the special iceboxes, intricate fuel system, stowage hatches, etc. etc. — but I decided it was more important to review the craft’s concept than its hardware. I’m sure the photographs will whet your appetite.

It would, however, be remiss of me not to mention her fuel consumption. I measured this both physically and on a GPS/flowmeter. The craft used only 16,5 litres after about 4H hours of pushing the motors hard — yes, 16,5 litres for both motors! I thought that since the twin Yamahas were four-strokes, we could not possibly have used less than 50 litres, an estimation I voiced aloud but deemed to be on the low side. I double-checked the consumption as I first thought it was 16,5 litres per motor. But, no, that was indeed the total consumption.
Yes, there is a lot I don’t know or understand about the displacement hull configuration, but the proof is in the 38 Sport’s performance. For me it was a very unique experience aboard a very unique craft.