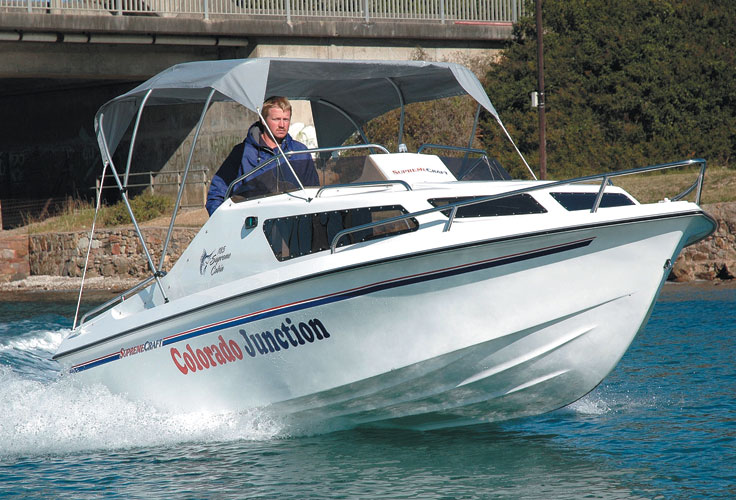 AS the evolution of boating progresses, many of the older designs and styles get lost and forgotten along the way. One of these is the cabin boat which was the trend a few years ago, a style that had many practical attributes. Well, it seems that those designs are slowly slipping back onto the market and are becoming quite a common sight again due to their practicality and popularity.

A&G Marine, Port Alfred, just happened to have two cabin boat models which they have modified to suit those looking for a multi-purpose craft.

The 185 Supreme Cabin is a unique craft as it has a full wet deck/self-draining system, and has been designed to suit mild offshore conditions, all while complying with the South African seaworthy standards.

She definitely not a run-of-the-mill boat to test, but nonetheless an interesting one that reminded me that, yes, the cabin design is a practical one.

GENERAL IMPRESSION
Even from a distance the 185 Supreme Cabin looked good with her tinted cabin windows and sharp, squared off lines. It’s amazing — when we were kids all we ever wanted was for dad to buy a cabin boat, probably just because it had a bed, and maybe that’s why mom never agreed to it!

CONDITIONS
On the day of the test at Port Alfred, the offshore conditions and launch were not favourable, but luckily we could put the boat through her paces in the Kowie estuary to at least get a reasonable idea of her general handling capabilities.

LAUNCHING AND TRAILERING
These craft come standard on galvanised trailers manufactured by A&G Marine, which are built tough.

They are very simple to operate when offloading and loading at the slipway, as in Port Alfred, where they make launching a cinch. 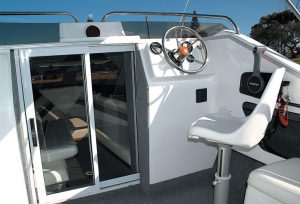 MOTORS AND CONTROLS
The boat I tested was fitted with a new Suzuki 140hp four-stroke. This single motor provided more than enough torque to create a high speed vessel.

The steering system was hydraulic which is a must when it comes to running motors of this size or horsepower. She had a side-mount control box, with all the controls being well positioned for comfortable operating of the craft.

PERFORMANCE
With a Suzuki 140hp four-stroke pushing the 185 Supreme Cabin, it was not hard to guess what the performance would be like before actually testing the craft. As expected, the 185 shot onto the plane extremely fast, and with it being a single installation, adjusting her trim for a smooth ride was fairly quick and simple.

One thing I have to say is that going for the far higher horsepower option definitely changes certain characteristics of the performance and general ride. In my opinion, this is a far better option than running on minimum horsepower.

With more powerful motors, getting onto the plane becomes effortless, even with a fair load. Revs are lower at higher speeds, creating better fuel consumption, and wear and tear becomes less.

Being a single installation, the turning circle is really tight in comparison to that of a dual installation, and with the motor being mounted correctly, there was no evidence of cavitation. 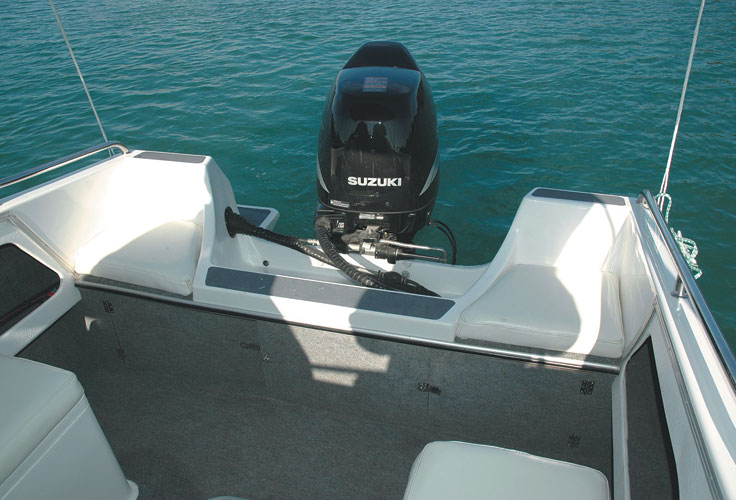 Forcing a decent wake in the estuary was fairly difficult, but when we managed to get a decent chop going she performed softly and smoothly throughout the tests. Even while sitting inside the cabin I found it to be comfortable. At higher speeds the stability was good for a mono hull, and when running though the wake chop the roll was not bad at all. At idle and stationary, again I could not complain and felt comfortable with the hull stability in the estuary. 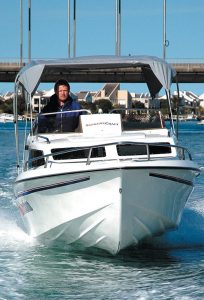 LAYOUT
As previously mentioned, the 185 Cabin has a self-draining system that is a real bonus, whether or not you go offshore with the craft.

From the dash/console area through to the stern, the 185 has a spacious layout. The deck area is carpeted, and she has a false transom with non-slip transom steps. Other features include optional rear seating with a stowage area below, flush-fit gunnel panels with stowage space and space to mount rod holders, dual passenger seats with stowage below, a central fish hatch, and an adjustable skipper’s swivel seat.

The spacious console dash area has a wrap-around windscreen and bimini top, and is situated next to the sliding doors which access the cabin.

Comfortable seating in the cabin converts to a reasonably-sized bed. The boat is finished off with a full stainless bow rail, and an anchor hatch.

FISHABILITY
The 185 Supreme Cabin has some good handling capabilities, and so becomes quite a versatile fishing craft even for light tackle offshore angling. With the Suzuki 140hp single installation, the revs are minimal at high- and low troll speeds, and the cabin cockpit area provides a nice shelter for those rougher days at sea or in the bays/estuaries.

When stationary and on the drift, stability in all areas is good.

Being a cabin boat, there are pros and cons where the layout is concerned. Basically, the stern area is the main fishing area, and the cabin/bow is the restricted area. Yes, this might create some difficulties, but there has to be some sort of compromise when it comes to having the luxury of a cabin which is boon if you’re going to have the family onboard or if you are an avid night fisherman.

With the amount of space available onboard, it would be simple to customise the craft to suit your style of fishing, whether it be on calm waters or offshore.

FINISH
Just like the rest of the Supreme range, A&G Marine’s 185 Supreme Cabin boasts good handling capabilities, a simple yet spacious layout, and some quality workmanship to finish off the craft. 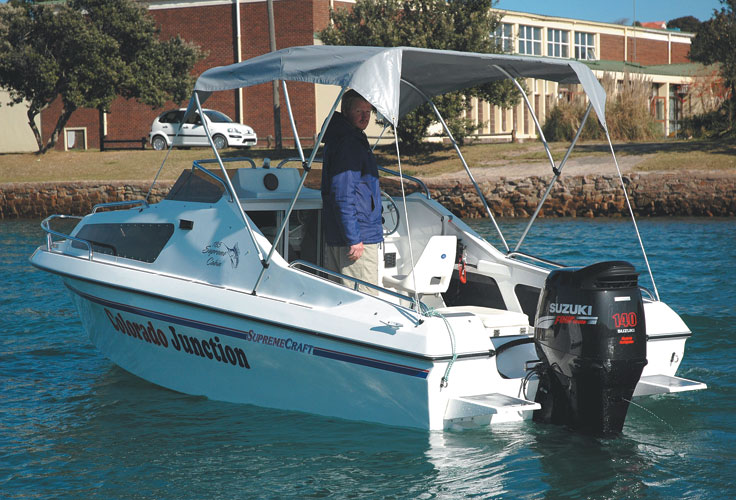 CONCLUSION
Although cabin boats have slowly faded from the boating scene, I really feel that there is merit in owning one. They are great when it comes to the family. The kids often get bored when out fishing, and inevitably fall asleep on the boat, so there’s a good place for them to hide in. The cabin also offers anglers general shelter and comfort from the elements, both day and night.

The 185 Supreme Cabin is still fairly light and small enough to tow with a relatively light vehicle. She’s a craft that won’t break the bank, and fits into the “good all-rounder” category.