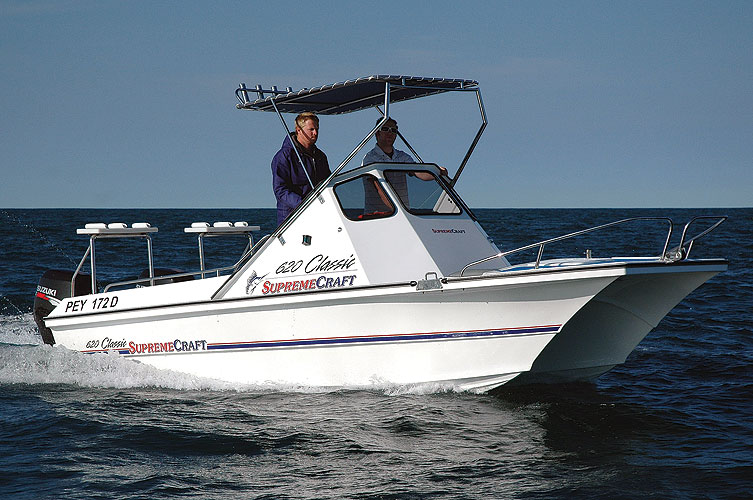 IN the previous issue of SKI-BOAT we ran a test on A&G Marine’s SupremeCraft 570 which turned out to be yet another successful medium-sized craft.

The next of their range up for test was the SupremeCraft 620 Classic, and although only half-a-metre longer than the previously tested 570, she boasted a completely different style, layout and ride.

The 620 Classic has a very different look to it — not the now popular modern looks, but rather the original look with sharper and harder lines. At first glance the 620 Classic came across as a purpose-built boat, and I wasn’t quite sure why they had chosen her particular design. However, new boats always look great, and after spending some time at Port Alfred, I could clearly see their reasons for designing the 620 Classic as they have done.

As mentioned in the 570 test, Port Alfred can be fairly fickle when it comes to offshore conditions — you never know what to expect. This time round we scored close to perfect conditions for the offshore tests — a moderate swell with an 8-10 knot onshore wind which created quite a short chop and was ideal to test the ride and handling of the boats.

The 620 Classic comes standard on A&G’s custom galvanised breakneck trailers that are really sturdy and well designed in all areas. This makes it a simple enough task to get the 620 Classic off the trailer and back on at the slipway. With the correct check-chain settings and an electric winch, it should be just as simple to trailer when beach launching.

At 6.2m the Supreme 620 Classic is still a reasonably simple craft to tow with a standard 4×4 vehicle. 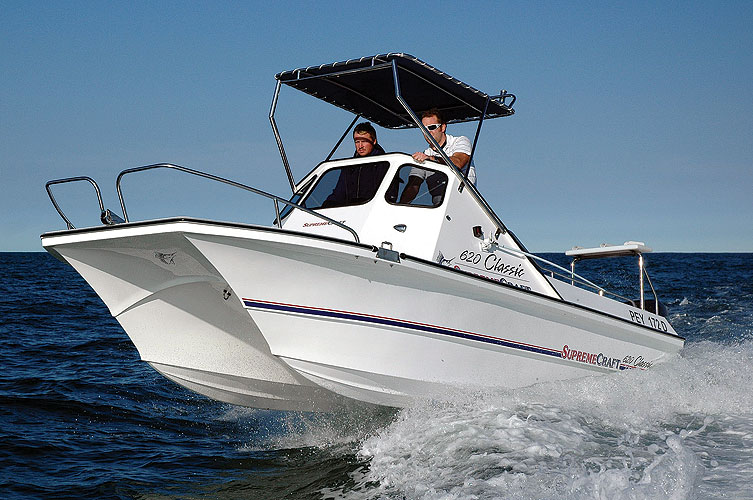 The twin Suzuki 70hp four-strokes she was fitted with gave the 620 Classic more than enough low-down torque to get out of the hole fast and onto the plane. I immediately noticed something different about the boat — that being the minimal resistance on the hull to getting up and planing. The 620 had minimal bow lift on acceleration, and the bow seemed to slice through the water with great ease, having similar characteristics to a displacement hull.

While setting the trims to suit the conditions we headed offshore into the niggly chop. With the 620’s particular hull action, she sliced the chop away to create a super-soft ride with just the odd bit of bow spray coming over. This was nothing to whine about, considering that I was pushing her to 30 knots-plus in the choppy conditions. The stability and general comfort was good at these higher speeds and obviously better as I eased off on the throttles, taking her down to civilised cruise speeds around 20-25 knots, with revs hovering around 3 800 rpm.

Running side-on to the chop the ride was just as consistent, with comfort and stability standing out. Although a bit more wind spray came over the gunnels, that was not serious as we had the extra protection from the wraparound console design.

Turning and running with the following sea again produced the identical ride. With caution I could knock the hammers down to achieve far higher speeds and still maintain a comfortable ride. Then the 620 Classic was put through a series of tight and full-locked turns at all speeds to test her response for surf launching. She passed all these tests with flying colours, and I believe she’s more than capable to push through the surf.

Coming off the throttles to lower speeds between 5 and 12 knots, the 620 Classic handled just the same as before. One particular characteristic that I picked up was the simplicity in maintaining constant bearings and tracks.

As previously mentioned, I found the 620 Classic to be a purpose-built craft — one that’s suited to the standard fishing in Eastern Cape waters, in other words, mostly bottomfishing. 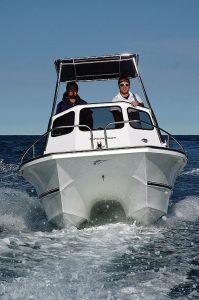 To begin with, the gunnels are lower than many new craft, which aids in stability and makes it far easier to get fish into the boat.

The stern section consists of a step-up platform between the compact, neatly mounted motors, a live-well and a low false transom area that I still find unique to A&G’s designs. The low false transom is a great help for days when you take a growler over the bow and need fast draining!

Moving toward the console area there is one long, raised stowage/fish hatch/seating area. The deck has a non-slip finish and rod racks have been fitted in the gunnels. The console is different to standard models in that it’s a semi-wraparound design, creating the same protection as you get from a forward console. It boasts plenty of extra stowage space, along with a wide area for electronics, and is finished off with a full windscreen setup and T-top cover.

Access to the bow is fairly restricted, but once you’re in the bow section it’s comfortable enough to stay there in reasonable conditions. There’s also a raised hatch/stowage area here, along with dual anchor hatches that are easily accessible and a wraparound bow-rail. There are many other small finishing touches on the craft, including full length grab rails and dual roll bars with rod mounts.

The 620 Classic has ample space in the stern and separate bow section to move and be comfortable in. I would rate the 620 as a super craft for reef fishing due to her particular layout, and she would also be quite well suited to different forms of gamefishing.

On the drift, the 620’s stability was comfortable, and she maintained this level of comfort when cruising through a series of lower troll speeds at all angles to the wind and chop.

Powered by the twin 70s, the 620 Classic glided along at a fast troll speeds of 12 knots at very low revs. This is a plus when it comes to judging the craft’s fuel efficiency. Another aspect that stood out while testing the troll speeds and handling was the protection one receives from the wraparound console which provides far more protection than a standard centre console. 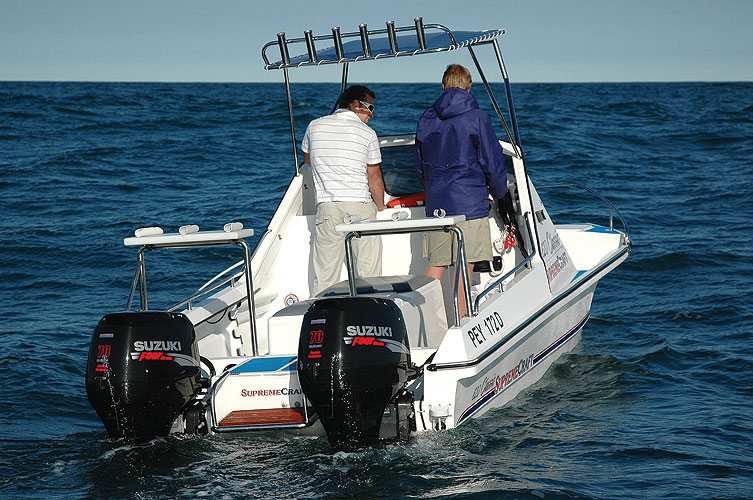 I know I have mentioned this before, but there is nothing better than seeing boat builders like A&G Marine striving to constantly improve on their overall finishes — that means everything from the actual hulls through to the small accessories.

The SupremeCraft 620 Classic might be different in appearance to some of their craft, but she follows their trend of building neat, practical craft that are just getting better and better all the time.

For those of you who don’t know, my family and I moved to Australia earlier this year. While recently cruising up the Maloolabah River in Queensland, Australia, a particular cat caught my attention where she was moored below the owner’s million dollar house on the water. Upon closer inspection I found the craft to be a new 620 from A&G Marine in South Africa!

It really is a small world, and it makes me feel even more at home to see familiar craft on this side of the Indian Ocean.