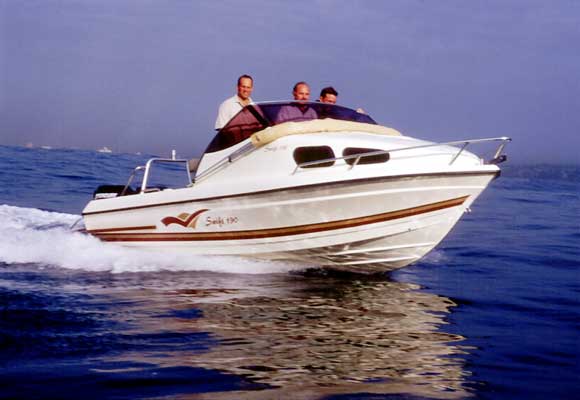 Innovation is often referred to as the key to success. If this is indeed the case, then Mallards must be well and truly on the right road.
The father and son team of Geoff and Mike Barnes are constantly telling me about some or other change they are making to their range of offshore fishing craft. “It’s perfect” is not a phrase they ever use, but it’s a goal they constantly strive for.
The latest model to be included in their range is a perfect example. The Swift 190 Cabin is a remodelling of the Swift 190 Centre Console which was launched during the mid 1990s, refined and redesigned to cater for a totally different client base.

General Impression
I was at sea on a 525 Cobra when I first saw the Swift 190 Cabin thundering towards me. Indeed, there is something about having a deep-vee mono heading straight for me that invokes a sense of awe. She looked big, she looked beautiful and, above all, she carried a sense of superiority in her physical presence. Yes, I have to admit I still love a big deep-vee.
As she reduced speed and came to a stop alongside us, it soon became apparent to me that this craft was different. The classic Swift design of her hull was recognisable, but her redesigned top deck was new, giving her a “Cape offshore” look at first glance.
By that I mean she gives the impression that she is ready and willing to take on everything the ocean can throw at her. However, in saying that, her deck design — together with the ski tow bar over the transom — tends to indicate another more pleasurable side to her character.
She is indeed a craft for all seasons, whether your preference is offshore, estuary and bay fishing or waterskiing. This is what Phil Holtzhausen of Richards Bay wanted, and that’s what he got — his new pride and joy.

Conditions for test
Winter hit the Natal coast hard this year. Finding a gap in the series of cold fronts that ravaged our part of the country was more good luck than good management. On the day of the test a westerly buster of note had blown through during the night, leaving a battle-scarred ocean and a bank of heavy clouds through which the sun peeped intermittently. That morning we did a lot of chasing sunbeams to try and photograph this beautiful craft in sunlight and thus show her off to her best advantage. 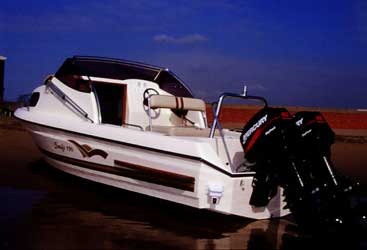 Launching and trailering
I watched from a distance as she arrived at Durban Ski-Boat Club behind Phil’s car, and was then hitched onto the tractor for the final 150 metre haul across soft sand and into the ocean, after her early morning haul from Richard’s Bay.
At a distance I watched the craft being deposited in the water and turned around with ease by Phil and his son as they waited for Mike to park the tractor and trailer. This is where a monohull certainly does have an advantage — it’s so much easier to turn in very shallow water.
The retrieve was effortless and went almost unnoticed as I was chatting to a mate on the beach. Using a Landcruis-er plus Warn Winch — plus years of experience — Geoff and Mike practically whisked her onto the trailer while my back was turned. I only caught the last two metres of “wind-on” before the Swift 190 Cabin was safely buckled onto her trailer and ready for the return trip up the coast to Richards Bay.

Motors and controls
As she motored at speed around the craft I was on during the photo session, for some inexplicable reason I presumed that the Mercury motors powering the Swift 190 Cabin were 100hp. It was only when I boarded her and took control that I noticed “60hp Bigfoot” branded on the motor covers.
The sheer performance of the rig had led me to believe that she was being powered by much bigger motors, but I set about making sure that I hadn’t just imagined her amazing performance and that the two Mercury Bigfoot 60s were indeed adequate power. They were amazing. With Phil and I aboard the craft, she planed quite easily on one motor, even with the other dragging.
Later, on the beach, I personally checked that the 17-pitch props they were allegedly swinging had not been replaced with 15s to enhance performance, but they were indeed 17s.
The controls and hydraulic steering were smooth and effective, especially in tight turns. Two shakedown problems that will easily be remedied were the closeness of the trim button of the starboard motor to the gunnel facing when in gear, and the adjustment of the gear selection lever to allow for easier forward-neutral-reverse movement than I was able to obtain.

I only transferred to the Swift 190 Cabin when we were way out to sea — the other side of No 1 Ground — after chasing shafts of sunlight, so I had to confront a choppy sea without first playing with her in the flatter waters of Vetch’s near the ski-boat base.
It was very much like jumping into the deep-end. However, in saying that, I was happy behind the wheel, feeling her deep-vee cleaving the choppy water as I headed south into the south-westerly wind that was blowing.
Finding her “sweet spot” was easy. Sweet spot is my term for the trim position that gives the smoothest ride in the prevailing conditions. The Swift 190 uses her hull design to give her best ride in a fairly prone position, with only a slight bow-up trim and a little extra trim on the port motor to counteract motor torque. Sitting at 3 200 revs, Philip and I had a very comfortable ride southwards to get to the big swells off the end of Durban’s Bluff.
While I was trimming the craft to my liking, I demonstrated to Philip that it took only a little more or less trim to alter her ride. Add extra revs to this equation and one can make the craft perform badly and thus make the ride a lot less comfortable.
When we got into the “washing machine” area off South Pier, I reset her trim to race with the waves and the wind. A little more bow-up — only a little — produced an excellent ride with the craft showing no tendency to yaw, even after running down a fairly steep wave face.
Following a few trial turns to make sure the steering and throttle controls were all in working order, I played in the big swells that wrap around the Cave Rock area at the end of the Bluff. Her turning ability is incredible, with the craft coming around in little more than her own length. The subsequent out-of-the-hole take off was also surprisingly quick, considering only twin 60hp motors were pushing her.
During this and later tight turning exercises, I found she liked marginal trim out of the motors which then lifted her steep flared bow area out the water, thereby allowing her to spin around on the aft section of her hull. There was no cavitation.
With the fun over, we drifted her for a while in the choppy water to determine her stability. Even with two of us balancing in the aft corner of the deck, we could not get her to take any water through the scuppers nor give us the jitters due to lack of stability.
Slow and medium speed trolling trials to all points of the compass proved both practical, comfortable and totally dry in the prevailing sea. During fast troll speeds she did kick up a little spray, but fortunately this was wind blown aft of those of us aboard.
Being a deep-vee craft with a fairly large planing strake running the length of her chine, she provides a very soft ride and only pounds very slightly when she comes right out of the water or if she is incorrectly trimmed, thus causing her to porpoise.
Having only now — after writing this report — reread my report on the Swift 190 Centre Console I tested in 1994, I am pleasantly surprised that the performance characteristics I wrote about in that test closely reflected my findings during my testing of the Swift 190 Cabin model. 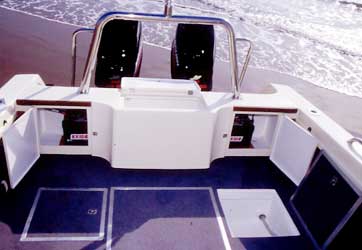 Deck Layout
To achieve the goal of providing a deck layout that met the requirements of the preferred multi-discipline use of the craft could not have been easy. Combining a cabin, a fishing deck and a waterski configuration is a tall order for any designer. However, the cabin and fishdeck layout have definitely worked out extremely well. As for waterskiing, well, there is a bollard on the aft rollbar to tie a rope to, but as to what else is required, I haven’t the foggiest idea.
In the cabin, whether one chooses to use the entire cabin area as a double bed, or prefers the side-seated configuration after the removal of the centre cushion, there is sufficient space and headroom to dispel the claustrophobia most small cabins on ski-boats evoke. The folding door access to the cabin is also wide, making access very easy — even for a big guy like me.
The forward console is practically designed from all aspects. It provides protection and is pragmatic from a skipper’s positioning as well as that of crew up forward during a long run.
An open deck with a deep, flush deck, central fish hatch and two aft small flush hatches have been provided, and the below-deck built-in fuel tanks are situated aft, just in front of the false transom. Within this false transom/motor-well there are two battery cupboards and a central livebait hatch.
A moveable/loose stowage hatch with an upholstered seat and tramstyle backrest was the only seating provided. This is practical and provides for substantial dry stowage. Surprisingly, even during the most violent turns, this hatch did not move around very much. 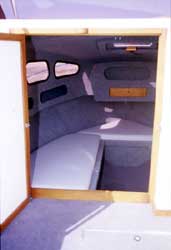 Finish
In Mallards Boating’s adverts they claim they are always striving for the finest quality craftsmanship and finish. Indeed, in the Swift 190 Cabin I feel they have certainly achieved this goal.
Although the craft I tested was not yet over-festooned with accessories, the moulding of both internal and external finishes was clean, solid and practical. This, together with the Flotex carpeted deck, will ensure that the craft is tip-top in appearance and easy to wash down — and keep in that state.

Conclusion
In this day and age, when family fun is a combined activity, the Swift 190 Cabin is certainly a craft that has multiple watersport uses.
And yet, in achieving this multi-use craft, Mallards have not compromised style in her overall design, nor adversely affected her fishability in either bay, estuary or, most importantly, out at sea. In addition, the cabin is comfortable, whether you just want to catch a nap or need protection from adverse weather. I will leave the comments about her suitability for waterskiing for somebody who is experienced in that sport.
Finally, I deem the Swift 190 Cabin to be a good looking, practical craft that will provide many a family with much happiness on the water.