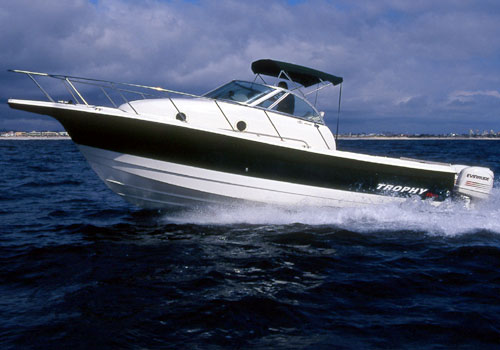 AS I walked onto the moorings at the Royal Cape Yacht Club during the Cape Boat Show, I immediately picked out the Trophy 30 I had flown down to Cape Town to review. Her lines are unmistakable. Her long, sharp bow and sporty-looking bow rails, her curved superstructure and high gunnels made her an imposing picture lying passively at her moorings.

I could not help but reflect on a review I did a year-and-a-half ago on the smaller Trophy 25 and my first impressions of that craft as she approached me at speed over a reasonably flat ocean. “Impressive” is an understatement, and when I got to the point of photographing the Trophy 30 Walkaround as she was slicing through the heavy chop while performing for the camera, she looked even better. Her racing-green sides with white hull up to chine level and white superstructure enhanced her majestic appearance as she powered through the ocean.

Ronnie Arenson, CEO of Waterworld had asked me to review this craft and the Ocean Master 24/7. As they were both on show at the Cape Boat Show, it provided an ideal opportunity for me to test them.

October weather in Cape Town is, more often than not, variable, to put it mildly, with cold front after cold front hitting the Cape and then moving up the east coast of South Africa. The trick is to catch the in-between days of lots of sunshine and minimal wind.

I hit town in the middle of a gigantic front that lashed the area with heavy rain and strong north-westerly winds. However, the weather forecast said it would clear, and so it did. By mid-afternoon the sun made its appearance, although intermittently, and the wind backed off a knot or three.

It was, however, not a nice sea I had to tackle, but with a boat as big as the Trophy 30 Walkaround — a deep-vee monohull at that — the sea presented little challenge. With wind over a moderately heavy swell, it was a challenge I was to enjoy.

The Trophy range of sportfishers is built in Washington State, USA. While they build their outboard-powered craft primarily for the serious offshore fisherman, they have the philosophy that families are important to anglers. Therefore, they have made provision in their design to make their craft as comfortable and family-friendly as possible to encourage family involvement. 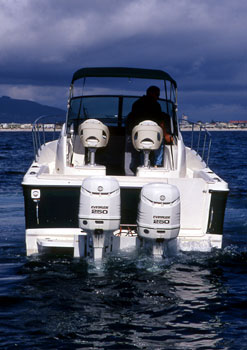 Whilst the Trophy 30 Walkaround is a big boat, her streamlined, racy design removes the bulk many 30 footers carry, therefore filling a different niche in the boating market. Powered by twin Evinrude 250 direct injection motors, she has a lot of performance at the base of the power curve, as well as incredible speed at the top end.

I stuck the Trophy 30’s bow out past the protected waters of Table Bay harbour and into the rough rain-dirtied brown water that awaited us. It wasn’t pleasant, but as I headed further out into the bay on a track towards Bloubergstrand, the rough seas were nullified by the craft’s performance.

I am used to seriously deep-vee’d craft, owning one myself, and know the importance of correct trim. The Trophy 30 has four options, two on the motors themselves and two hydraulic afterplaners — or trim-tabs, as they are often called — to adjust and optimise the craft’s ride.

Until one gets used to the craft, it is often difficult to initially settle on an overall trim setting that is right for the craft and the particular sea on which one is travelling. My modus operandi is to fully trim up the hydraulic afterplaners, and then, using the motor trims, set the ride to the degree where you, the skipper, are happy with the boat’s ride in that particular sea.

Thereafter, I trim down the hydraulic planers until they just stabilise the lateral side-to-side movement of the craft. Then I leave the motor trim setting alone and only play with the hydraulic afterplaners to vary the attack angle of the craft on the sea, as well as control her lateral stability when changing course and when taking on the sea at varying angles.

Once you have mastered that, big deep-vee monohulls come into a class all of their own. They take on any sea, especially a head sea, with ease. Once you get used to riding this sort of craft in a big following sea, you — like me — will always love the feeling of a craft with a big, very deep vee under your command.

The Trophy 30 was no different. After I had set her on a course and had travelled a kilometre or two, I was confident enough to start pushing up the speed. After that we were thundering across Table Bay at over 30 knots with the sea and wind on our port bow, the rev counter fixed at 4 200 rpm. It was the sort of run where one says to oneself, “Yes, this is fun, let’s keep going!” And, in my case, let’s see what the beach at Bloubergstrand looks like from out at sea.

Eventually, while Willem Voerman, General Manager of Waterworld Cape Town, and I were deliberating about boats or motors, we almost reached the beach and had to do a “left-hand-down” — turn to port — and head for Robben Island, directly into the swell and chop. She was still running well, but I eased off marginally on the throttle, bringing her SOG down to 20 knots. Both Willem and I agreed that at that speed, and the way the craft was running in that sea, a 30/40 mile run into the deep would have been a comfortable, reasonably fast ride.

As fishing requires more than just a comfortable ride out to sea, one always needs to return. This is when Murphy usually increases the wind speed and worsens sea conditions for the long ride home. So, following a reciprocal course, I opened her up with the wind and sea on her transom and “ran with the wind”. A bit more bow lift and a bit more throttle allowed me to run with the sea at a speed that did not have us getting stuck in the trough after coming down the face of a swell, but enabled me to power her through it and up the next crest. Running a big following sea in a seriously deep-vee’d craft can be intimidating for a novice skipper. But fears aside, using trim and power — especially power when needed — makes her run her course like a racehorse. It’s both exhilarating and exciting, and she covers ground with great alacrity.

Lying side-on to the sea on the drift or slow troll often makes a mono deep-vee rock ’n roll. I was therefore surprised how stable the Trophy 30 was under these conditions. Having not seen her hull out of the water, I can only presume that her aft straking must be designed to stabilise her at low speed or drift.

With cruising and trolling being the way she will spend most of her time whilst out at sea, I spent a lot of time putting her through exercises that would show me how she trolled at slow and medium speeds in the prevailing seas and fairly strong winds. With the lack of excessive superstructure, I found her only moderately affected when trolling with the bow just off the wind, after which she held her course well and did not surge at troll speed. At fast troll, even without her clears in position, we didn’t get wet.

For the fun of it I put her through her paces as if she was going to be surf launched. For a craft this length she turned reasonably well, without undue leaning into the turn. Out-of-the-hole she jumped with speed and got onto the plane very quickly. What really surprised me was this craft’s ability to plane on one motor — 15/20 knots with two of us aboard.

As I mentioned earlier, she is designed and built with comfort in mind. Being a 30 footer, there is space — or should I say length — to make provision for all the comforts, yet still have a good sized fishing deck for serious fishing. 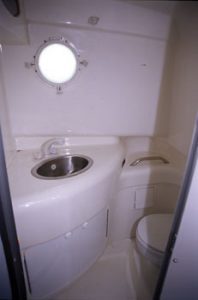 Up forward, the living area has been cleverly designed to provide both a comfortable, relaxing area around a fair sized table, and when the need arises, this table can be lowered to form the base of an upfront double bed. This area can also be curtained off for a degree of privacy from the kitchenette and the second sleeping area that is squeezed in under the helm station floor.

The kitchenette is compact and includes a stove and fridge, as well as a basin with pumped fresh water for washing up.

On the starboard aft side of the downstairs area is a bathroom which has a toilet and wash basin. It is large enough to make it practical to use.

To close off the area, a novel, sliding, rounded top, smoked perspex door makes it very practical to step down into the cabin, without wasting a lot of space in the main helm station area. 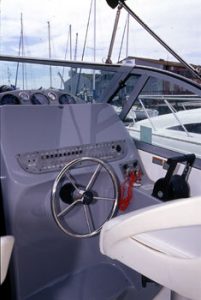 As with most American craft, the skipper and his left-hand assistant both have very comfortable and sturdy chairs that provide them, while seated, access to the full array of instrumentation, electric switch panels and electronics, steering and throttles. What’s more, standing behind the steering, as I usually do while skippering, was not uncomfortable as I used the front of the big chair as support.

I did not find myself restricted, even when throwing this craft through very tight turns and exits where a lot of wheel work and throttle movement were required.

The fishing cockpit area is reasonably large with an uncluttered, practical, open deck with high gunnels for maximum protection. On the deck are two under-floor fish hatches that are more than adequate for this type of craft. If, on the odd occasion, a few extra fish or big fish are landed, they will need to be left on the deck. So what. It adds to the fun of a good day at sea.

A wide transom has been incorporated into the Trophy 30 and includes a well-designed twin inlet livebait well, as well as a wet hatch and a transom door that leads onto the aft motor platform. I call it a “motor platform” because it is in essence an aluminium structured outmount with a flat top to which the motors are mounted. It is, however, big enough to use as a step or boarding platform while at moorings. I also see it as a way of walking a fish “around the motors”, if one ever got into that position when fishing.

I have skimmed over many, if not the majority of extras big and small that have gone into the final presentation of this sporty cruising-cum-gamefishing craft. I spent a good few hours exploring the Trophy 30, from the walkaround feature that accesses the bow area to family and light tackle anglers, to the transom and her cabin. I could not help being both intrigued and impressed by the finish and thought that has gone into this craft.

For the offshore sportfisherman who wants a little more than a fishing boat, plus the ability to add the pleasures of cruising with family and friends, the Trophy 30 Walkaround might just be the craft you have been looking for. Besides, sporty looks and outstanding performance come standard with this craft.