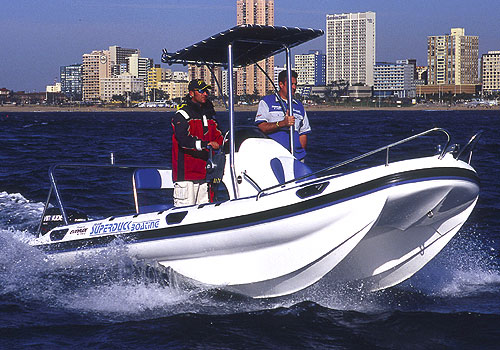 AJ Smith, owner of Superduck, was adamant that the Unique 575 and 540 had to be reviewed for this issue of SKI-BOAT. After viewing the two boats at Superduck with AJ and father Wayne, I left their premises wondering what the point was of having a semi-rigid (aka rubber-duck) with fibreglass pontoons. Well, I was in for quite a surprise.

The night before we were due to test the craft, the south-wester eased her way in and I began to doubt we’d be able to do the test. Thankfully, however, the morning arrived with a fresh offshore wind and bright sunny skies, which made for a happy photographer at least.

The Superduck entourage arrived at Durban Ski-Boat Club portraying a very flashy image, with new 4x4s and a boat to complement each one, and signage that certainly made Superduck stand out and look professional. These guys are definitely making themselves known in the boating industry in a positive way.

The Unique 575 Cat comes on a sturdy, galvanised, breakneck trailer designed with a new easy-loader system. On the beach the boat slides off the trailer with ease, without the vehicle straining to pull away. In small beach-break conditions, a two-man crew could handle pushing her in and in larger conditions. Three crew would be ideal. The Superduck team prepped the boats for launch, and within minutes they were off the trailers and ready for testing.

This range of boats definitely has the right name, as they are undoubtedly “unique”, having a pontoon constructed of fibreglass instead of the normal materials used on semi-rigids. My first question regarding the 575 was, “Is there really a need to put 60hp motors on such a small boat?” That was only until I converted her actual length of 5,75m into feet which gives you a 19ft boat. Everything on the 575 is neat, compact and in proportion, which is, I think, why she seems like a small boat to the eye. 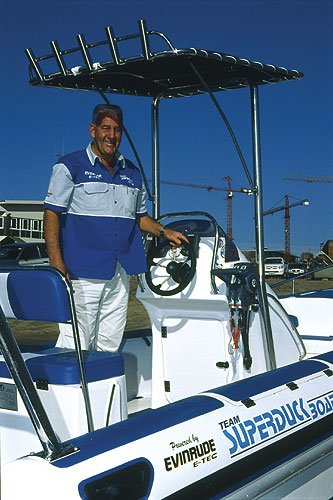 PERFORMANCE:
Having launched, I found the controls to be super smooth and responsive. A gentle nudge on the Evinrude controls put the 575 on the plane, leaving plenty of extra power to spare. One plus with these control boxes is that both trim buttons are on the port side handle, meaning you only need to use your right thumb to trim both motors at the same time.

While turning full lock to both port and starboard, there was literally no cavitation, either from a stationary position or when banking into hard, tight turns at speed. The craft turns on a
tickie which is a huge advantage for surf launching. The 575’s stability through all of this was incredible, both while stationary and when moving.

As we proceeded further offshore, the initially sheltered sea in front of the ski-boat club turned fairly choppy with a moderate swell running. The 575’s bow sits proud, though, and with minor tweaking on the trims she tackled the rougher conditions with complete ease, side-on, into and with the wind. The 575 also threw very little spray, with most of it being deflected straight back onto the water. This gave an amazingly soft, comfortable ride. With all of these positive handling attributes, it’s definitely going to make a tricky surf launch a lot easier.

One last test — with a 15 knot south-westerly gusting around the South Pier, this boat would have the ideal opportunity to show how good she really is. Once again the 575 out performed my expectations for a craft of this size. Even at a consistent troll speed in the rough conditions, she handled the larger, choppier swell with ease in all directions.

On the way back to the base the larger following sea was ideal to test the craft for broaching. Not once was I forced to correct my course or hang onto the steering to prevent a broach when powering into and out of the large troughs and forcefully surfing down the swells. A consistent speed of between 10 and 20 knots is comfortable, even in the rougher conditions, without having to keep adjusting the throttles.

Having checked the fuel levels at the start and rechecking before beaching, it was surprising to see how little fuel we had used, considering the distance and fairly hard driving we had done. Another bonus was that minimal two-stroke fumes and smoke were emitted by the new E-TEC Evinrudes. This will be a bonus for anglers who are prone to seasickness which is only exacerbated by engine fumes. 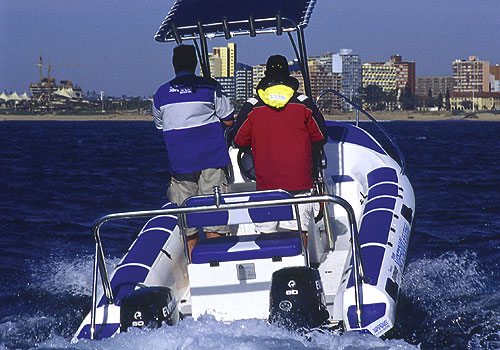 FISHABILITY
With the pontoon configuration holding most of the hatches and the console being situated slightly off centre toward the bow, anglers can move 360 degrees around the boat, if necessary, when fighting a fish. Again, there is no clutter and no unnecessary items that could get in the way.

For standard, conventional fishing the 575 is great all round, and with a few minor modifications she would also be perfect for the deep sea flyfisher.

Back in the sheltered, flat water, the power of the 60hp E-TECs was more than sufficient to pull waterskiers out. The craft also travels at high speed with ease.

Beaching was effortless. Stable and relatively light, the Unique 575 slid easily up the beach. Loading her back onto the trailer on the beach was made to look extremely easy and fast, which is obviously an important factor when trailering in soft sand areas or when the swell is washing up high.

LAYOUT
As mentioned, instead of the standard pontoon construction, the Unique 575 Cat has fibreglass pontoons, but you can only tell the difference once you touch them.

These solid tubes definitely have a number of advantages:

• Neat, compact dry hatches that are constructed into the fibreglass pontoons, all with sufficient drainage and easily accessible to clean. This is a great concept for the avid spearfishers as the pontoon hatch space can hold long spearguns.

• With all the extra hatch space (seven moulded hatches in total), it definitely gives more deck space with no clutter.

• There is a flat step on the stern of the pontoons for quick, easy access when pushing into beach breaks.

• There’s a non-slip finish on top of the pontoons.

The 575 is fitted with two 60hp Evinrude E-TEC motors with a trim-and-tilt hydraulic steering system for effortless turning.

Other features include a stainless-steel roll bar, rear padded seat/hatch with adjustable back rest, modern look console fitted with all the bells and whistles that also holds four fuel cans, a stainless-steel T-top to lessen the sunburn factor and stow fishing rods, a built-in crew seat in front of the console, a bow anchor hatch and seating area and a stainless-steel bow rail. The hatch, seating and non-slip areas are colour-coded to add to her stylish look. 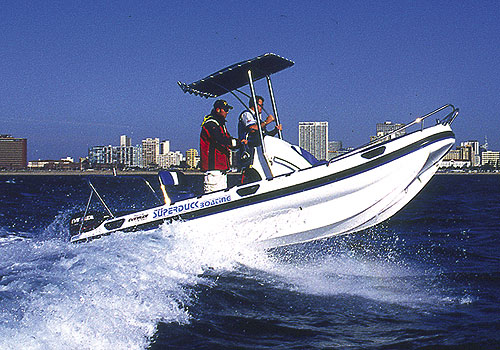 CONCLUSION
The 575 has it all! She’s a catamaran hull which looks and handles like a semi-rigid — a boat that looks flashy and is easy to operate. She can be used for a multitude of purposes, including offshore playing, diving or fishing, and at the dam for skiing, fishing or cruising.

A great deal of thought, effort and professional workmanship has gone into the manufacturing and fitting of the 575, giving you an all-rounder with great flowing lines, finishes and a superb ride as well.