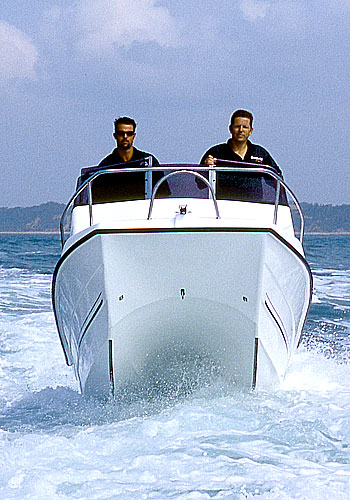 BRODERICK SPORTS — formerly Jet Ski Warehouse — are not new kids on the block as far as boating is concerned. Indeed, their General Manager, Tony Lindhorst, has been around offshore boats as long, if not longer, than I have.

Tony, who is promoting Broderick Sports’ influence in offshore boating, has secured a number of imported as well as locally made offshore craft to add to the company’s range of leisure craft. Amongst these is the new Unity 156 Elite, a 15’6” cat that Tony is having made in South Africa to suit his customer base. He asked me to profile this craft during a recent excursion to Richards Bay.

LAUNCHING AND TRAILERING
Launching the Unity 156 into Richards Bay harbour off the yacht club slipway was effortless, and I am sure it would be nearly as easy launching her off the beach.

The craft is supplied with a sturdy, galvanised road trailer manufactured with sufficient rollers to ensure an easy nudge launch into the surf. During the retrailering, Justin, Tony’s son, just drove her up onto the trailer at the slipway. Then it was just a case of securing her before being pulled out of the water by their 4×4 tow vehicle. 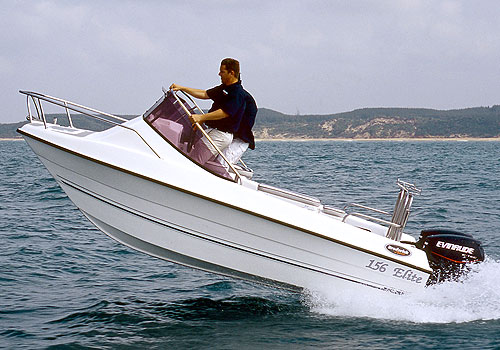 PERFORMANCE
The Unique 156 Elite I tested is powered by a pair of 40hp Evinrude trim-and-tilt motors that provided her with great out-the-hole performance as well as an even torque curve right through their power range.

What was really daunting was running alongside Broderick Sports’ recently imported Rampage 38 Express sportfisher as we left the protection of the harbour for a bumpy south-westerly driven sea. But who says the small dogs can’t run with the big ’uns. We ran a long way up the coast with the following sea on our starboard transom at close on 20 knots. Marginal bow-up trim helped and we stayed dry.
Naturally, the run back into the westerly chop was a little more difficult and I not only had to trim her bow right down, but also ease back on the throttles to maintain a comfortable 13 knots. However, in the flat conditions of the bay she took off at great speed — in Justin’s hands that means flat out!

What really surprised me was this craft’s performance during tight turns and quick acceleration out-the-hole. Justin and I spent a lot of time spinning her around and trying to pick holes in her performance. She didn’t let us down, and above all we experienced no cavitation. The Evinrude 40s not only bit deep and firmly, but never hesitated to dig her out of the hole to face the next oncoming wave when the throttles were jammed forward.

Both the motor controls and steering were smooth — remarkably so —proving that the installation as well as the cables used were excellent. Considering the sea conditions, the Unity 156 Elite was surprisingly dry and stable for a small craft, and regardless of whether we were slow trolling or motoring to cover distance, we didn’t get wet. 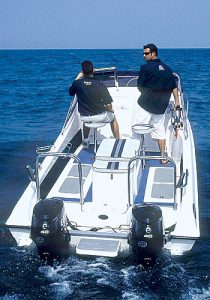 DECK LAYOUT
The deck layout of the forward console 15’6” craft was reasonably basic, but in saying that, there were many aspects where detail, finishes and layout clearly reflected Tony’s long history of ski-boating. So much has to be incorporated into a small craft these days, and in the final analysis it is how this is achieved that counts. After all, these requirements really only manifest themselves once the craft “goes fishing”. I believe Tony has thought this through and has come up with a fine craft.

A conventional forward console configuration gives the Unity 156 Elite a sporty look and, in turn — because of its fairly far forward position — gives a bigger than normal deck area for a craft this size. A large deck also means that the siting of the centre coffin/fuel hatch and the below-deck fuel hatches can be arranged where they are most practical and bigger than usual. In fact, on this craft the deck has been so well arranged that a livebait hatch has even been incorporated in the transom area between the motor wells.

Talking about stowage — a general problem with smaller boats — the Unity 156 Elite uses much of the space within the top deck moulding for stowage. There are three lockers in the forward console bulkhead face, as well as two in the false transom, and the internal gunnel panel has been cut out to provide rod storage. 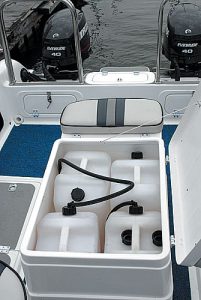 All the finishes and fittings used are in keeping with the size and price range of this craft.

CONCLUSION
Nowadays there are many, many more opportunities both in South Africa and especially in Moçambique for the younger angler to be able to take his family on holiday and still play with boats and fish. From both a financial as well as practical point of view, a smaller, more easily towable craft thus becomes the answer.

The Unity 156 Elite is just this type of craft, fulfulling all the requirements of an angler with these needs. It is, of course, fully seaworthy and can be fished effectively in moderate weather conditions.