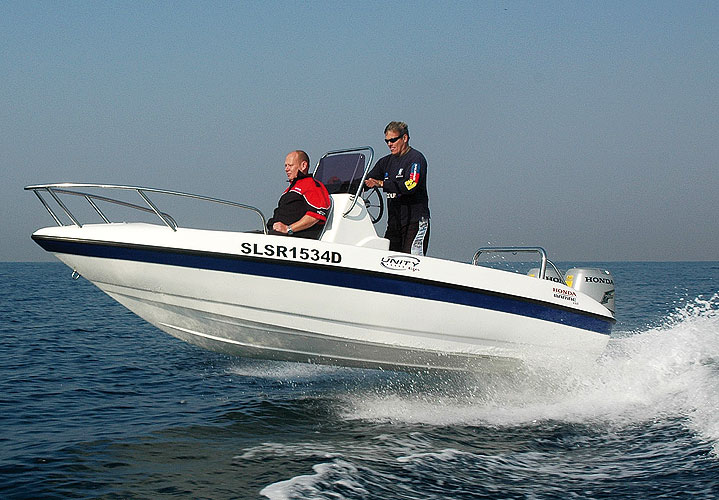 HONDA Marine Vaal recently decided to show their customers and the public that they not only sell boats suitable for boating on the Vaal Dam, but also craft that will suit the deep sea angler. Tony Lindhorst asked me to test two of his craft — centre console models — that are aimed at both the deep sea- and freshwater markets.

GENERAL IMPRESSIONS
I didn’t know what to expect, so I was very surprised when Tony and his crew arrived at the Durban Ski-Boat Club with the Unity Surfmaster, a cat, towed behind a 4×4, and the Unity Tiger, a monohull, behind a Corsa bakkie. I was even more surprised to hear that the Corsa bakkie had towed the smaller craft, the Unity Tiger, all the way from Johannesburg.

Although both boats were small vessels, you would still expect that they would use a stronger vehicle to tow the boats such a long distance.
However, the Tiger — the one up for review in this issue — did indeed feel very light behind the bakkie, and there were no hassles while towing her.

In general I was impressed with what I saw and what Tony has achieved.

CONDITIONS
I can’t say too much about the conditions, except to say that this was the kind of day that I would rather have been fishing than testing boats!
The sea was so smooth that getting the boat to perform properly was harder work for me than a day in the office. We had no wind, just a small swell, and lovely sunshine. 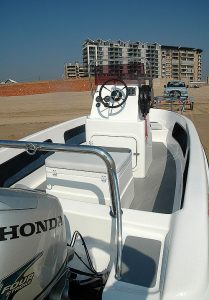 LAUNCHING AND TRAILERING
For a change I’ll discuss the trailer before we discuss the launching and beaching. The boat fits perfectly onto the trailer, which is one of the reasons they were able to tow her so easily all the way from Jo’burg. We put her behind my 4×4 to get her onto the beach, and I didn’t even feel her behind the bakkie.

I believe that the easier it is to load and offload a boat, the more you will enjoy your day out on the water. Tempers normally flare most around the loading and offloading of boats, so if you can do it as easily as Tony and his staff did, well, the sale is already as good as half-made.
Offloading was no problem, and when we beached I loaded the Tiger again without any help from the staff. I just lined up the trailer, hooked her up to my 4×4 winch and pulled her up with no hassles. 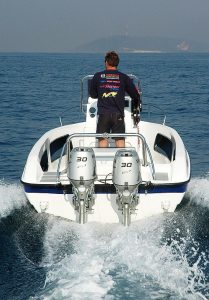 MOTORS AND CONTROLS
One of the boats was fitted with two 60hp Honda four-strokes and the other with twin 30hp four-stroke motors. This was going to be interesting, going from a boat with 120hp on the back to a boat with 60hp pushing her.

The Unity Tiger was fitted with twin 30hp Honda four-strokes with sidemount cable controls, and I must say that I was a little concerned about how the craft would perform. Was she underpowered?

The controls moved smoothly into and out of gear, which proved again that as long as the installation has been done correctly, cable controls are fine. The normal steering system was fitted, and even with this installation I didn’t have to hang on to the steering to get her to turn. She handled with ease.

PERFORMANCE AND HANDLING
As I mentioned, I had my concerns about the 2 x 30hp Honda four-strokes on this boat. I thought that she would be sluggish and slow out of the hole. Well, I couldn’t have been more wrong.

This boat is designed to take four people, and even though there were only two of us on board, I am pretty sure that even with four people aboard she would still perform well with these small motors.

Her good weight displacement greatly aids her performance. It seems that the manufacturers have fitted the centre console just perfectly. As a result, when you have loaded the craft with fuel, gear and crew, the weight displacement is also correct. This allows the boat to perform to her full ability, gettting onto the plane with ease. She’s also very stable, especially considering she’s a monohull.

It’s an awesome feeling to ride a small craft like this with direct steering which allows you to feel the power. Even though the motors are small, they certainly do have a lot of grunt between them. I tried to get her to plane with just one engine, even though I knew I was pushing my luck. Although it took a little longer, I did eventually succeed.
Through my normal test routine she showed no broaching with a following sea, even at full throttle. She turns in a very tight radius, and although she did have a little bit of cavitation on a sharp turn when I pushed the throttle open, that’s no reason for concern. It’s something that could be easily sorted out.

Riding into the swell she cut through the water smoothly, with no pounding or spray from the hull. Even though the sea was smooth and glassy, we still didn’t get any spray or water onto us or the deck. That alone tells me a lot about a small boat like this.

She was also very stable while running at full throttle, while trolling and even when just drifting. What also impressed me is that I didn’t have to do any trimming of engines to balance the craft, either on the port or starboard side. She ran perfectly level and straight. 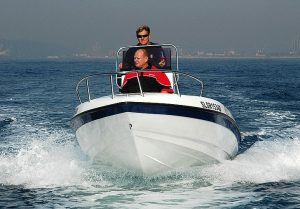 LAYOUT AND FINISH
This centre console layout has been designed to make full use of the available space on the boat. The anchor hatch in the bow is very easily accessible, and there’s storage place under the seat in the bow as well as in the centre console, and also beneath the seat in front of the console. The fuel hatches are also located here. 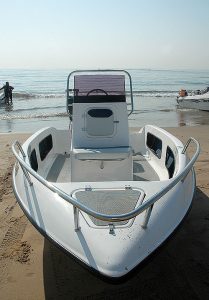 Behind the steering there’s a hatch that could be used for a fish hatch or more storage space. At the stern they have mounted a ski-pole to which you could fit some rod holders, or if you want to use the boat on the river for some skiing, you’ve got a place to hook your ski-rope. In the gunnels on both sides there’s space for your fishing rods and other equipment.

The overall finish on this little boat is of a very high standard.

CONCLUSION
The Unity Tiger is a very impressive little boat. She handled the sea very well, was most stable and reacted reliably and promptly to controls and steering. This small boat can prove to be very popular amongst the smaller boat brigade because of all the above, as well as her affordability and first-class finish.

Anyone who needs a small fishing monohull or a small waterski boat — or both — would do well to have a good look at this craft.