THE SAILFISH 176 — by Blue Water Boats 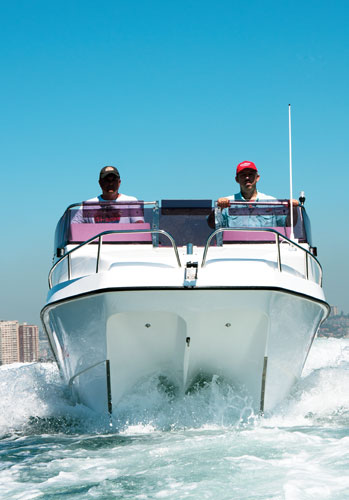 JEROME Rai is extremely proud of the boats he builds at Blue Water Boats’ large factory in the industrial area of Amanzimtoti. Together with his wife, Linda, he has been supplying the South African boating fraternity for the last 13 years, and over this time they have built up a strong base of loyal boat owners, many of whom have upgraded to Blue Water Boats’ craft.

The boat I tested was owned by a fellow Natal Deep Sea Rod and Reel Club member, Peter Brassey. His Sailfish 176 was recently launched to replace a 16ft Blue Water Boats Sodwana Cat 16 Peter had used off Durban for the past four years.

Pete’s new boat is now fully “tuned” to his specific style of offshore fishing which involves both day and night sorties to target game- and bottomfish. He’s a well-respected angler who knows what he wants, and in his new boat, Backline, he believes he’s found his ideal craft. 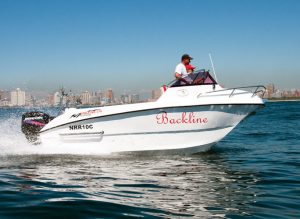 GENERAL IMPRESSION
When the Sailfish 176 arrived at Rod and Reel, I was immediately struck by the shape and style of her bow sponsons and the “wave breaker” Jerome has introduced in the forward central point between the bow entry of the two sponsons. The other thing I noticed was the craft’s high sides, relative to her size.

She looked splendid on her trailer, but even better when she was at sea for the camera-shoot with Pete at the helm.

CONDITIONS FOR TEST
Conditions during September and October in Durban are not for the fair-weather fisherman. It blows, it rains, the sun shines and occasionally we have a few hours of reasonable wind and sea conditions.

As a result we had to wait nearly three weeks for the ideal conditions — sunshine, a reasonable wind and the sea not too bumpy. Following on the heels of a hard northeaster, a light westerly had arrived during the night. Most importantly the sun was shining — the day had arrived.

At the appointed hour two Sailfish 176s exited Durban Harbour against the remainder of the easterly swell pushing surprisingly far down the channel and into the bay.

Out at sea the swell was large, but the light southwesterly was bunching it up with a small chop on the surface, providing us with almost ideal conditions for testing a craft this size.

LAUNCHING AND TRAILERING
Backline arrived behind Pete’s 2.8 Colt on a solidly-constructed galvanised trailer suitable for both beach and slipway launching. As this craft is almost exclusively launched off Rod and Reel’s slipway, Pete has fine-tuned his procedure so that he can launch his boat virtually by himself with just a bystander (this time me) holding the nose rope as she slips off the trailer.

I know this slipway well, although with much heavier craft, but Pete still taught me a trick or two and he made it look so easy.

We returned on a low spring tide, so we had to offload the crew and manually get her to the loading point and the trailer where she had to be hand-winched into place. Experience made it a simple task and Backline was soon reloaded.

Obviously, with deeper water I would drive her straight onto the trailer, making the task of reloading her even easier. 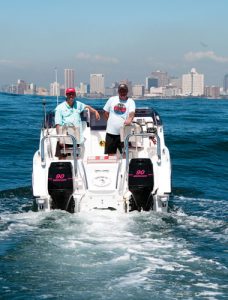 MOTORS AND CONTROLS
The boats I used during the review were virtually identical and they were both powered by twin Mercury 2-stroke 90hp motors.

Whilst Jerome says the craft is rated for motors in the range of 60hp Big Foot to 115hp outboards, most of these craft are sold powered by motors that are of similar size and weight to the 90hp Mercs used for the test.

Backline was swinging 4-blade 17-pitch props that performed magnificently during the entire time I had her at sea. Coming out of a seriously hard turn — and even with the deeper bite of the four blades as against three-bladed props — the motors provided instant power and revs, making this exercise very efficient.

Furthermore, no matter how I tried I could not get the props to cavitate. I was very impressed.

While the sea did not permit me to open the motors to full revs, the speed we did achieve — in the region of 25 knots — was more than sufficient.

Both boats had hydraulic steering, but different helm units. Backline had a five-turn lock-to-lock and Impression, the second boat, a three-turn. Whilst the five-turn is obviously very light and easy on the helm during a difficult surf launch, the skipper would have to learn to judge his turning a lot earlier. However, I got it taped during simulated surf work and she worked well.

The throttle levers on both boats were smooth and on Backline I could easily get to both trim buttons. On Impression the starboard trim button was a tad close to the gunnel face, and with my fat fingers a little difficult to use when the throttle was pushed reasonably far forward. 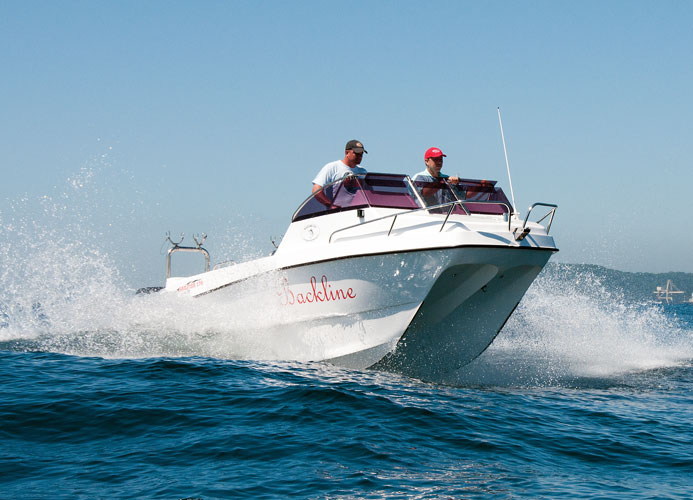 HANDLING
One of the advantages of launching through the harbour is that one has a fair amount of time and distance to get to know the craft and play with the levers before you actually hit the sea. I like finding the “sweet spot” at about 15 knots with the craft comfortably on the plane, so that once I open her up after getting port control’s approval to exit the port, I already know how to run the craft on the way out to sea.

As I said, the swell in the channel was bigger than expected and both craft had to slow down marginally for a comfortable run. It was interesting that as we hit the rough stuff both skippers independently slowed down at the same time and we both arrived at the same comfortable speed as we exited the port.

Once at sea I started photographing Backline and I noticed Peter was running his craft a little bow-high for my liking, so I asked him to trim her in a bit.

After that she looked pretty and seemed to ride beautifully at the various speeds I got her to parade at for the camera.

When I moved across to Backline to start testing her there were now three of us aboard, whereas earlier there was only Peter and SKI-BOAT magazine’s Mark Wilson. I noticed that the large central livebait hatch was full of water and asked Pete why that was.

He said that as he fishes mostly two-up, he doesn’t have a third crew member to move to the back of the coffin hatch for aft stability in a rough following sea. So, out of habit, he runs with the hatch full of water.

I emptied the hatch and performed many trials, moving crew as well as refilling the livebait hatch and the Luna tubes that are situated in each corner of the transom. Obviously, there is a difference in required trim under all these conditions. However, the extra weight at the stern did provide the aft stability when we were running down the face of some big swells with the three of us on board upfront.

This craft is light on the water, reacts extremely well to trimming and is easy to get to ride as perfectly as possible in turbulent water.

Without doubt she favours a proud or bow-up stance which is achieved with minimal motor-up trim, meaning that her design ride is nigh perfect. Excessive bow-down trim means that one is forcing the bow and shoulder areas of the sponsons to ride too deep in the water. This would be very noticeable on the rev counter and SOG reading, both of which would drop down considerably.

I also feel by doing this the “wave breaker” is not only being asked to work harder, but also begins to have directional input on the ride. In essence one ends up having three entry bows — the two sponsons and the wavebreaker which, at reasonably high speeds, will fight against each other, whereas at correct trim the wave breaker substantially softens the craft’s ride. At low troll speeds the effect of these three entry points stabilises forward stability and virtually eliminates blowback out of the tunnel front.

Into the head sea but over an opposing big swell she rode really well at reasonably high speeds under different conditions. With the correct trim her run with the big swell was great, and she has more than enough torque to pull out of the suck-back at the base of the swell and take on what is ahead of her.

As this is the ideal sized craft to trailer to faraway destinations, most of which require a surf launch, I spent a lot of time putting her through simulated surf conditions. I could not fault her and would happily take her through the surf at any of the venues I have launched a ski-boat. 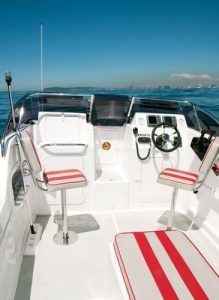 DECK LAYOUT
With two boats to view one sees two sets of ideas that different owners custom-build into their craft. Pete had opted for swivel seats upfront, whereas Radwaan Hoosen, owner of Impression, had chosen a bum box configuration. Both have their pros, but as Pete says, he does a lot of bottomfishing and wanted to maximise his deck space. Radwaan, on the other hand, is a gamefisherman and spends a lot of time fishing the bay. He finds the rear-facing bumbox seats very comfortable for his crew.

Both owners have opted for the centre coffin hatch that takes six cans of fuel and has an upholstered top for extra seating.

Backlines aft transom area is well set up with two Luna tubes and a big central livebait hold with a see-through panel. All are plumbed well, producing a bubble-free waterflow to keep the livebait alive.

I liked the higher than normal gunnel height on the Sailfish 176 and overall deck space, as well as the easy access to the upfront anchor hatch. Access to the latter is sufficiently wide to allow even a big crew member to stand full on and “work the pick” with ease.

Having skippered both craft quite extensively I found the helm station area comfortable, providing sufficient room not only to swing the steering during, say, surf work, but also to give one a good view of all the instrumentation. Throughout the many hours I spent at sea, and acknowledging that the wind was not strong enough to blow a lot of spray, I came away surprisingly dry — a major plus for those who wear glasses.

FINISH
For me a craft has to feel sturdy when she’s being bounced about on the ocean, and this relates to the rigidity of the hull, the top deck moulding and the fitting of cupboard doors and hatch tops, etc. Jerome has taken a lot of trouble to ensure that his boats not only look good but also feel good and solid during their time at sea.
Neither boat was over-festooned with fancy extras, but that which was installed, including all the stainless-steel work, was robust and neatly fitted to the degree one has come to expect from the ready-to-use offshore craft available in South Africa today.

CONCLUSION
The Sailfish 176 is much more than an entry-level ski-boat — she is a craft that is big enough and sea-capable for even the very serious offshore angler to be able to “ply his trade”.

She is also the right size to easily hitch up and ride, be it from home to the local launch site or, say, to the waters of Moçambique.