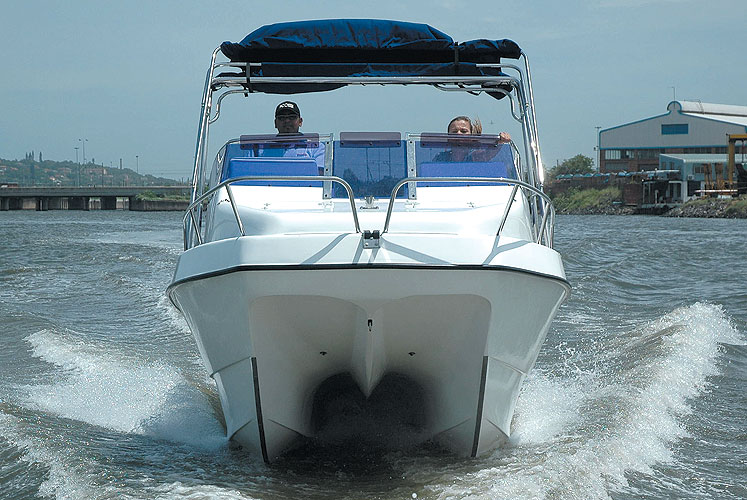 I HAVE been waiting for this test for a long time. Nearly a year ago I heard rumours that Jerome Rai from Blue Water Boats was going to build a new big boat. He finally confirmed that with me towards the end of last year, and I’ve looked forward to seeing it ever since.

Jerome wanted to design a boat that would become very popular with fishermen, and he seems to have pulled it off.

GENERAL IMPRESSIONS
The first time I saw the new Sailfish 200 she was still on the floor and far from finished. I could see that a lot of hard work and effort was being put into her to make her a success. Coincidenally, I saw her again at Honda Marine Pine-town when they were fitting the new twin 135hp Honda four-strokes. She looked very good standing there on her trailer with new Hondas on the back.

CONDITIONS
I tested the Sailfish 200 on the flat water in the bay as well as out at sea. The sea conditions were not that great and I am sure that it would have been easier to test her in a washing machine than on that water.

The northeaster was blowing at round ten knots, but what had really turned the sea upside down was the previous couple of days of rain with a southwesterly wind. The conditions were good to give the boat a proper test, though, but it was challenging to take good photos. 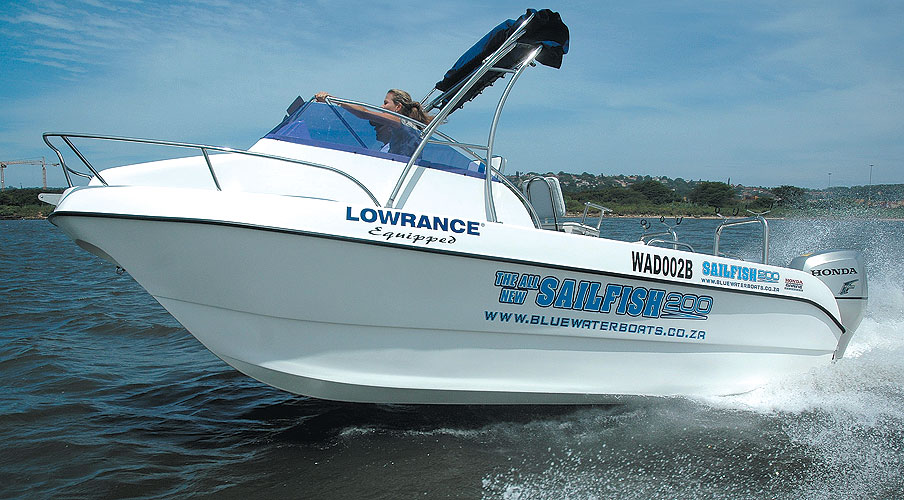 LAUNCHING AND TRAILERING
With a length of 6.3m, although the boat usually comes on a single-axle trailer, buyers are advised to rather take a double-axle trailer option with hydraulic brakes. Offloading her in the bay was smooth and comfortable, and she slid into the water easily. Loading her back onto the trailer was also easy, even though she is such a big boat. It just takes practice and a lot of patience.

When I did the test on the beach we used a tractor to drop us in the water and experienced no problems. After the test I ran her up the beach and used my Nissan 4×4 with the winch in the front to pull her up on to the trailer. It looks so easy the way the boat moved smoothly into position.

Pulling the boat off the beach with my Nissan was also easy, although I had thought I would battle with such a big boat in tow. 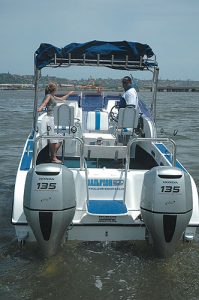 MOTORS AND CONTROLS
The boat I tested was fitted with 2x135hp Honda four-strokes. The Sailfish 200 can be fitted with engines varying from twin 90hp outboards up to twin 140hp motors. These 135hp Hondas packed awesome power and pushed the Sailfish out the hole in a flash. I had no problem getting her onto the plane and up to top speed.

The boat was fitted with cable-driven sidemount controls which were a little tight in the beginning, but as the test progressed they became smoother. By the way, the technology in these four-strokes is just amazing — every time you turn the key the engine starts first time.

The 135hp Hondas are so powerful that I could not run full throttle out at sea without being airborne most of the time. However, in the protected area I did push them a little bit and the performance was most impressive.

PERFORMANCE
As I mentioned already, the performance of the 135hp Honda motors was very good. Even when we offloaded the boat in the surf with cold engines they started first time.

These 135s have more than enough power to push this class of boat through the surf should a surf launch be required. They get the boat out the hole and onto the plane quickly, and turning the boat in the surf would not be a problem either.

I have to say that the handling capabilities of this boat are great. Indeed, even a novice would feel safe driving a Sailfish 200. 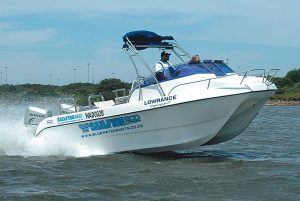 LAYOUT
The Sailfish 200’s layout is definitely geared for the serious fisherman. She comes standard with an open deck with some hatches fitted onto the deck, but that could be changed to make space for a fighting chair.

There is space for four fuel cans on each side of the boat with huge fish hatches just in front of the fuel hatches. In the false transom Jerome has fitted a huge livebait well that will keep your livebait in excellent condition.

There are seats on both sides of the boat behind the skipper, and one next to him. There is one storage hatch on each side of the front console, and another in the middle at the walkthrough. In the floor below that Jerome has built a cooler box that could be used for drinks or bait storage.

Gaining access to the anchor is very easy, and it would be simple to put the anchor down or pull it up. In both gunnels there are recessed rod holders to store the rods while travelling.

Overall, this boat is spacious enough to enjoy a lovely day’s fishing.

FISHABILITY
The Sailfish 200 is big and stable and you would be able to practise any type of fishing from her without feeling uncomfortable or unsafe. 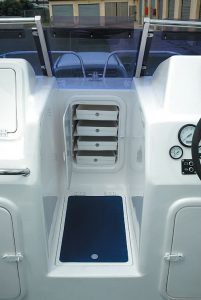 FINISH
Blue Water Boats have made a lot of changes to the original design which I was first shown. They have changed the tunnel, the front of the nose and the console in the front. The deck layout has also been changed and will no doubt be very comfortable with carpets all round inside.

The curves and lines they have used give her a very neat, modern look, and the Honda engines at the back complete the boat perfectly.

CONCLUSION
The Sailfish 200 is big with a lot of space and handles nicely on the water. She is also a very dry boat — I didn’t once get water over the nose of the boat, even in those rough conditions. Any serious fisherman who can still afford to buy such a big boat should take her for a test run. You’re bound to be impressed. •