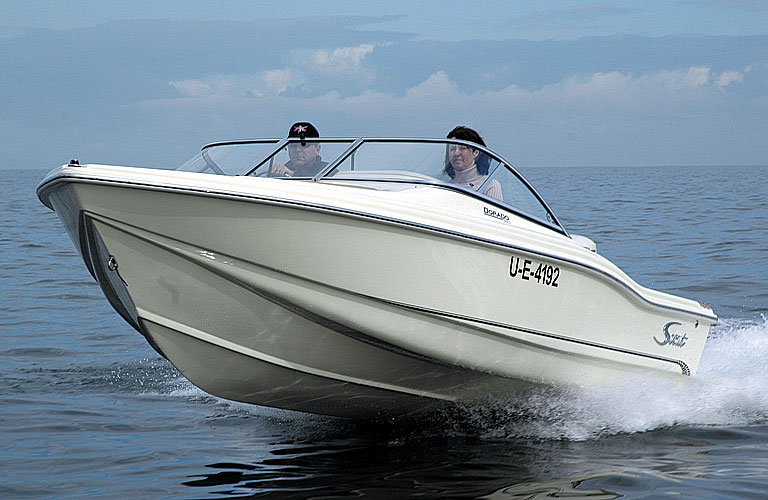 IN the previous issue of SKI-BOAT we tested the impressive Scout Sportfish 187, manufactured by Kalyn Marine in Cape Town. At the same time I tested the different-styled Scout Dorado 185.

As mentioned in the November/December issue, Terry and Lynne Eggers- glusz originate from Zimbabwe and relocated Kalyn Marine to Cape Town in 2003. They now have a super workshop catering for all boating needs and repairs. Judging by their knowledge and many years of experience, I am positive that they are going to do well with these imports.

They have powered forward since the previous issue and hinted that one of the fancy larger Scout Sportfish 282s will be coming into the country in the near future.

GENERAL IMPRESSION
Terry and Lynne were just as excited about the Dorado 185 as they were about the Sportfish 187, and again I could see their enthusiasm was fully justified. Although we have a wide range of fantastic boats being manufactured in South Africa, it’s still very interesting to see all the imported craft coming into the country. Like many of the other imports, the Scouts are very modern and classy-looking, boasting numerous different features.

CONDITIONS
Take fifty-fifty? Phone a friend? I don’t think so. This is Cape Town we are dealing with, and when it comes to weather and conditions, you’ve just got to pray for the best. Planning to do a test in one day is definitely taking a chance, and lucky for me the weather gods were on our side, gracing us with a beautiful morning outside Cape Town harbour — for a change!

LAUNCHING AND TRAILERING
In Cape Town, unlike most of the standard launch sites on the east coast, you have the simplicity of launching from sheltered coves with slipways. Although it was dead low tide, launching the Scout Dorado 185 was effortless off the slipway, as was trailering the boat at the end of the day.

The high-speed galvanised trailers designed for these boats are also manufactured by Kalyn Marine. 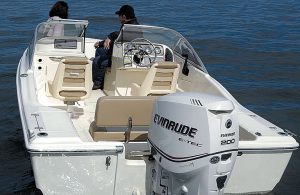 MOTORS AND CONTROLS
As tested, the Scout Dorado 185 was fitted with a single Evinrude E-Tec 200hp motor which was more than sufficient for a boat of this size. The control box — a slimline side-mount model — was well positioned and very smooth to operate.

The boat had a cable steering system, which was the only thing that I felt could have been changed. A hydraulic steering system would make handling and control much smoother and easier.

PERFORMANCE
When first viewing the Scout Dorado 185, like the Sportfish 187 version, the boat automatically looked like it was going to be a good rider. The hull had a nice deep-vee on the bow which gently flattened out towards the stern. What I found particularly interesting on this model was how pronounced the outer chines on the gunnels are. From a front view they could almost have passed as mini sponsons. It’s quite a different design for a monohull, but looked very practical with regard to creating stability and a good ride.

Well, only actually testing the boat would prove this theory, so on we went …

Pull-off power out the hole with the 200hp Evinrude E-Tec was fast, and with a small adjustments on the trim to raise the bow slightly, the 185 cruised effortlessly across the ocean. Although the conditions were exceptionally good for the day, there was still enough of a chop and swell offshore to put the boat through its paces, even though these boats aren’t specifically designed for offshore usage.

Cruise speeds around 20 knots in these conditions gave a soft ride with good stability for a mono of this style and size. I can only presume that this comes from the interesting design and solidity of the hull, as I found with the Sportfish model. Far higher speeds could be achieved with reasonable comfort, although in general offshore conditions you would not be racing around the ocean in a craft like this.

The 185 has a number of good characteristics, including general comfort levels, stability and dryness of the ride, which were all maintained at constant speeds and running in all directions to the prevailing conditions. In addition, I noted that the 185 came off swells softly when cutting back into the water, which adds to the general comfort of the ride.

Like with most monohulls, the turning circle is very tight, and even more so with this boat having a single motor instead of dual motors. There was a hint of cavitation on the tight turns, which I put down to the pitch of the prop and power of the motor. It’s something you could easily overcome just by changing the pitch to suit your preference on power.

Coming off the throttles to slower speeds and at idle, the 185 again showed good stability and still maintained a comfortable ride. All round, the performance was good on the Dorado 185, and I believe she’s well-suited to our freshwater venues, estuaries, harbours, and — at a push — even offshore in light conditions. 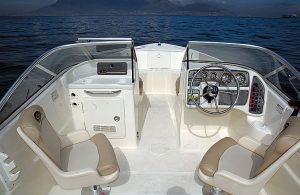 LAYOUT
As was the case on the Scout 187, the general layout of this craft stands out. It’s spacious, simple and has everything that you need to make your boating comfortable.

On the transom everything is neatly fitted and compact, including an aerated livebait well, another side hatch for stowage, flush-mount stainless-steel rod holders and a removable stern seat that is adjustable. The deck has a non-slip finish and incorporates a large flush-mount hatch that can store waterskis and other equipment, or it could serve as a decent-sized fish hatch.

The 185 also boasts rod holders/tubes that are mounted onto the gunnel panel. The dual console area has comfortable, adjustable swivel chairs, and this area is protected by a full wrap-around clear windscreen that can be opened in the centre to give access to the bow section. The captain’s dash has all the bells and whistles, including a carbon-fibre finish that houses an assortment of gauges, a switch panel for all electrics, and the controls.

In the bow section you have comfortable padded seating, moulded drink holders and an anchor hatch with top and front access. Stainless-steel bow rails and other fittings complement the rest of the craft.

FISHABILITY
Being an open and spacious boat, the Dorado 185 is most suitable for fishing in dams, estuaries, harbours and, if necessary, offshore in flat conditions. As mentioned in the performance section, the 185 is stable and easy to operate at all speeds.

FINISH
Again, as with the Sportfish187, the all-round general finish of the Scout Dorado 185 really stood out. The 185 boasts a smooth, shiny, glassy look, with flowing lines and a good modern design. To top it off, you can tell just by looking that these boats are solid.

CONCLUSION
From the hull design to the layout to the finish, the Scout Dorado 185 is a super boat in its class. These craft are suitable for many different applications, including waterskiing, general cruising and fishing. Their classy look will no doubt do wonders for your image.

What really impressed me was the affordable price of this craft, considering it’s an import. If you’re looking for boat that’s a fairly versatile all-rounder for the sporting family, is simple to tow, easy to handle and looks really good, this might just be the craft for you.