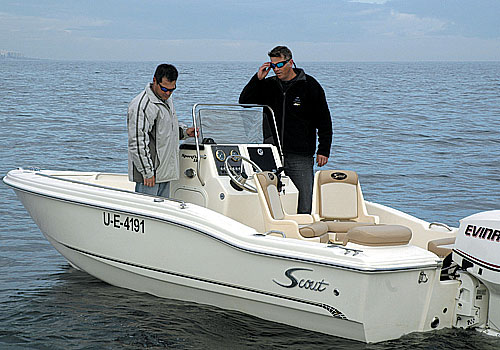 AFTER many months of trying to coordinate dates for a test, I finally arrived in Cape Town to meet Terry and Lynne Eggersglusz from Kalyn Marine to test the new Scout boat they had imported from the United States.

Terry and Lynne originate from Zimbabwe and relocated Kalyn Marine to Cape Town in 2003. They now have a super workshop catering for all boating needs and repairs. Judging by their knowledge and many years of experience, I am positive that they are going to do well.

Finally it was off to the launch site to see the first two Scout monohulls.

GENERAL IMPRESSIONS
When we were discussing the test on the Scout, it was obvious how excited Terry and Lynne were about their new range of boats. Upon first viewing the craft in Cape Town, I could see that they’re fully justified in their excitement.

Although we have a wide range of fantastic boats being manufactured in South Africa, I am still very intrigued with the imported craft coming into the country, and like many of the other imports, the Scouts are very modern and classy-looking, boasting many different features.

CONDITIONS
When you’re planning a boat test in Cape Town it’s always risky, and when it comes to weather and conditions you just have to tata ma chance! Planning to do a test in one day is even more risky. Lucky for me the weather gods were in our favour.

LAUNCHING AND TRAILERING
Unlike most of the launch sites on the east coast, in Cape Town you have the simplicity of launching from sheltered coves with slipways. Although it was dead low tide, launching the Scout 187 was effortless off the slipway, as was trailering the boat at the end of the day.

The trailers for these boats are galvanised high-speed models which are also manufactured by Kalyn Marine. Heavier duty breaknecks can be made on request if you’re going to be beach launching.

MOTORS AND CONTROLS
As tested, the Scout Sportfish 187 was fitted with a single Evinrude E-Tec 115hp motor which was more than sufficient for a boat of this size. She had a binnacle-mount control box that was very smooth to operate and was well positioned. The cable steering system was the only thing that I felt could have been changed. A slick boat like this definitely deserves a hydraulic steering system which would make handling and control much easier. 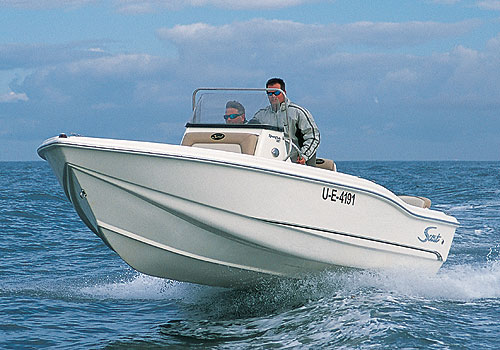 PERFORMANCE
My first impression of the Scout 187 — based on her looks — was that the boat was going to be a good rider. The hull had a nice deep-vee on the bow which gently flattened out onto the stern. It was interesting to note how pronounced the outer chines on the gunnels were; from a front view they could almost have passed as mini sponsons. It’s quite a different design for a monohull, but automatically looked practical as far as creating stability and a good ride. It was time to put her to the test!

Pull-off power out the hole was fast with the 115hp Evinrude trimmed down, and with a small adjustment on the trim to raise the bow slightly, the 187 was gliding effortlessly across the ocean. Although the conditions were exceptionally good for the day of the test, there was still enough of a chop and swell offshore to put the boat through her paces.

I found a decent speed to cruise at was between 18 and 22 knots. In these conditions it gave a soft ride with good stability for a mono of this size. I can only presume that this comes from the interesting design and solidity of the hull. Far higher speeds could be maintained easily with reasonable comfort, although in general offshore conditions you would not be racing around the ocean.

A good characteristic of the Scout 187 was that the comfort, stability and dryness of the ride were still maintained at these higher speeds, while running in all directions in the prevailing conditions. She also came off swells softly when cutting back into the water, which adds to the general comfort of the ride.

Simulating surf launching, I pushed her into full-lock turns from stationary and at medium speeds. As with most monohulls, the turning circle is very tight and even more so with this boat having a single motor instead of twins. There was a hint of cavitation on the tight turns, which I put down to the pitch of the prop, and that’s something you could overcome easily just by changing the pitch to suit your powerpreference.

Coming off the throttles to slower speeds and at idle, again the Scout 187 had good stability and still maintained a comfortable ride. All round, the performance was good in these moderate conditions. 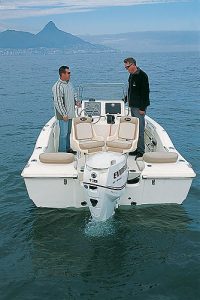 LAYOUT
On the layout side the Scout boats definitely shine. In the stern section all motor fittings are neatly installed, compact and well hidden. On the single motor installation there are dual stern jump seats with standard backrests, one of which serves as a hatch and the other a livebait well with pump. In between these seats is a smaller flushmount hatch that houses bilge pumps. It’s easily accessible to work in.

Moving towards the bow you have a non-slip deck area, dual swivel seats behind the console, a console that has been carefully designed to suit the skipper’s needs with all the gauges and electrics in full view, a watertight lock-able electronics box, stainless cup holders, stainless bow rails, rod holders, a large windscreen and side access into the console. Another nice feature in the layout is the forward console seat which matches the rest of the boat but is detachable and is a proper large cooler box.

The gunnels flow straight down onto the deck, with flush-mount stainless rod holders. On the starboard side rod racks are mounted into the gunnels in such a way that only the reel section and butt are exposed — a novel feature for extra protection on your fishing rods. Another noteworthy feature in the layout is the recessed bow handrail — definitely something that would simplify getting into the boat via the gunnels, if necessary.

In the bow section there is another padded seating area that is also a hatch, and there’s a spacious anchor hatch that is accessible from both the front and top. There are just too many classy features on the 187 to mention, and even with all of them the layout is still spacious with ample area to move around in.

FISHABILTY
Getting back to the handling and layout of the boat, the Scout Sportfish 187 is a boat that is suitable for all types of fishing from dams to offshore in moderate conditions. On the offshore side, the handling at fast and slow troll speeds was good for a monohull, being stable and fairly simple to keep on a steady track. On the drift the roll was not bad, even when all the weight was on one side, and she took no water over the transom.

Gunnel heights in the stern are around knee height and gradually get higher towards the bow section, being suitable for balancing against when fighting fish. As mentioned earlier, it is a fairly spacious boat with little clutter on the deck, and if you needed extra space you could remove the cooler box and stools. 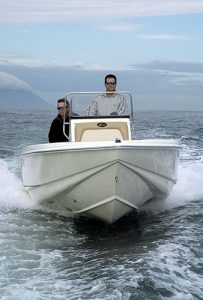 FINISH
This is one area that really did stand out — the all-round general finish of the 187. The shiny, glassy look, flowing lines and modern design give her such a great look. To top it off, you can see and feel how solid these boats are.

CONCLUSION
From the hull design to the layout to the finish, the Scout Sportfish 187 is a super boat in her class. These craft are suitable for many different applications, and have a classy look to go with them. What really impressed me was the affordable price of this craft — for an import.

So, if youre looking for boat that is a versatile all rounder that is simple to tow, easy to handle, and looks really good, the Scout Sportfish 187 is definitely worth taking for a test.