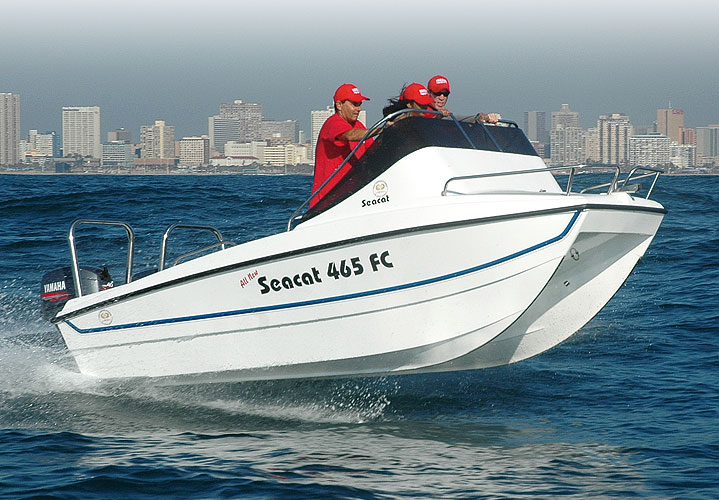 PEOPLE often make comments about our boat reviews: why didn’t you say this and why did you say that, and can’t the manufacturers change this or that … The bottom line is that it’s very difficult to keep everybody happy, and you as a potential buyer and fisherman may have different priorities to mine, based on the type of fishing you do and your personal preferences.

At SKI-BOAT we do a large number of on-the-water tests, all following a fairly set routine so that we can maintain consistency and are able to make valid comparisons between different craft and the situations in which they might find themselves at sea. For this reason many of the tests may look more or less the same, but in actual fact they differ greatly … just read the fine print.

My honest opinion is that you should always test-drive a boat yourself if you’re interested in buying it. Don’t rely solely on written reviews.
The Seacat 465 FC is the same hull as the one I tested in the previous issue, except of course this one has a forward console, not a centre console. Some people feel there’s a huge difference between forward- and centre console craft, but I don’t think there is.

It’s all about centre of gravity and correct weight distribution. With this sorted out, performance factors even out, so when choosing either a CC or an FC, it then boils down to personal preference.

As a result of this, Yamaha SA and Grant Reed have made sure that when they put a boat on the market, they have both centre console and forward console configurations available.

Once again I met up with the staff of Yamaha and Grant Reed at Durban Ski-Boat Club to test these two lovely small boats.

TRAILERING AND LAUNCHING
With the boat weighing a mere 500kg, towing her is as easy as towing a small loaded trailer, and she handles easily in the traffic. When I put her on the beach, the trailer tracked 100% — perfectly in the tyre tracks — behind the car and it was easy for me to get her on to the sand and down to the water. Offloading was no problem with the breakneck trailer, and it was also easy to get her into the water. 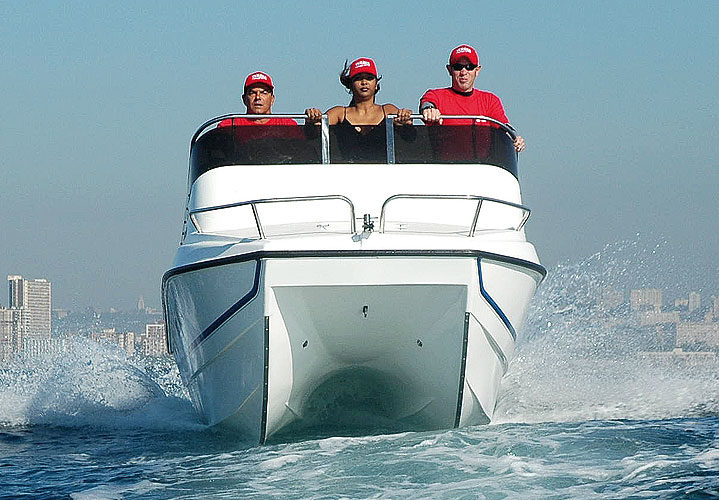 After the test, running her up the beach onto the sand and then pulling her onto the trailer with the winch was also very simple. With these trailers built so that the boat fits perfectly on them, loading and offloading is even easier.

CONDITIONS
There was no wind on the day of the test, but the sea was like a washing machine, making it more difficult for us to do a proper test and also take decent pictures. 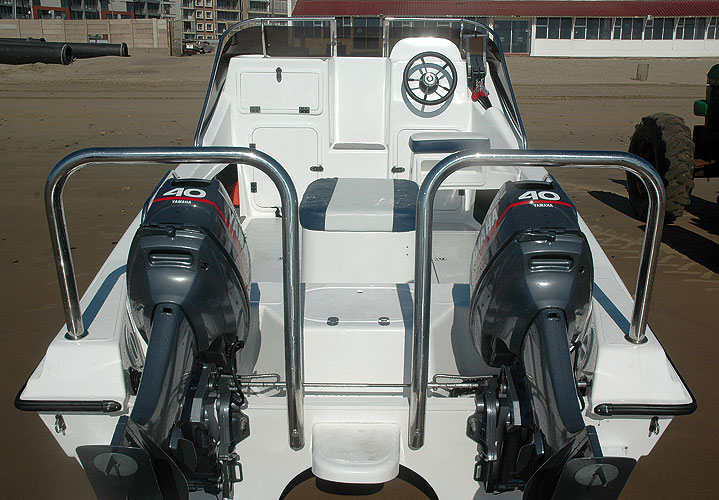 MOTORS AND CONTROLS
This forward console Seacat 465 was fitted with two 60hp four-stroke Yamaha engines with sidemount controls and hydraulic steering. The controls were normal cable controls, and once again, if the controls are fitted correctly you’ll feel that putting the boat into and out of gear is very smooth.

With the two 60hp motors on the back, hydraulic steering is ideal for this craft, and that’s certainly what I would recommend.

PERFORMANCE
With the Seacat 465 FC fitted with the two 60hp four-strokes, there was a vast difference between the performance of this craft and the centre console craft which was fitted with twin 40hp two-strokes. The 60hp motors pushed the FC boat from a standing position onto the plane within three seconds, and she jumped out the hole in a flash.

Even though the engines were bigger than on the CC, I could not get her to cavitate on the turns to starboard and port. Running into the swells she was more than alive, and I had to hold back to ensure I was not airborne all the time.

With this power package, she would be ideal for surf launching as well as protected launches.

With a following sea the boat did not show any sign of broaching, even at high speed. In this case, the forward console seemed to be more comfortable and able to take up to four people, whereas I would not recommend more than three people aboard the centre console craft at any one time.

Even with four people on board, the FC craft had more than enough power to handle the sea safely. 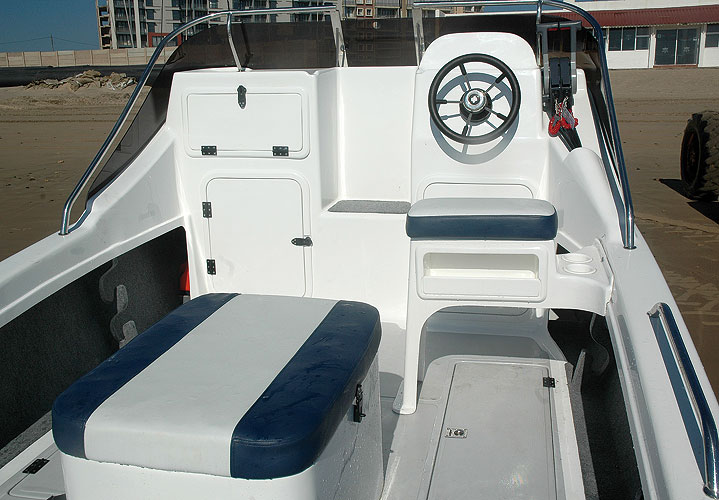 LAYOUT
Let’s start at the bow of the boat … The forward console craft has a window in the front that you can remove, thereby giving you easy access to the anchor hatch in the front. At the anchor hatch she has two steps which are comfortable and easy to sit on when you’re letting down the anchor.

Wind and water deflectors are also fitted on the front window, making it a bit more comfortable for the skipper and crew on those windy, uncomfortable days on the water. 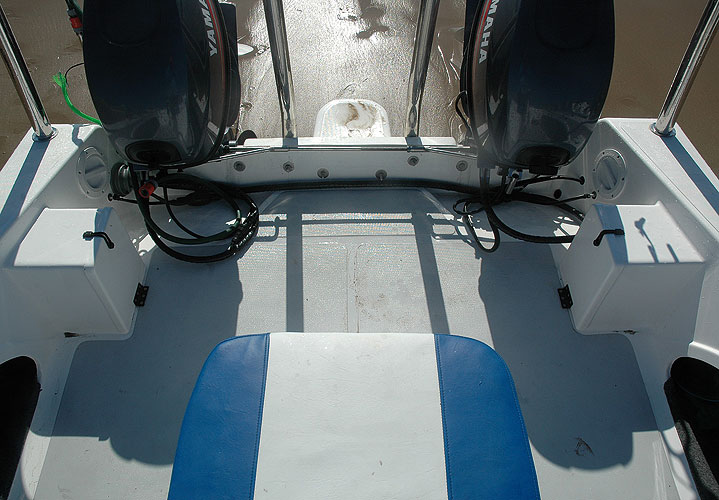 There’s more than enough storage space in the front for all the tackle and extras that anglers normally carry with them. Above the steering there is a lovely console for the fishfinder and radios.

There’s a very comfortable, removable seat for the skipper and one for the crew, and the fuel hatch in the middle of the deck allows you to carry enough fuel for every trip. In the stern the boat is fitted with a removable splashwell with a livebait well. This is easy to remove if it’s not needed for the trip, and is even easier to re-install when needed. It’s a very nifty idea and a clever installation.

Then of course there are the normal stainless-steel railings around the boat.

CONCLUSION
As I said in the previous issue, I am most impressed with the collaboration between Yamaha and Grant Reed. They are always trying to satisfy the customers’ needs, while constantly coming up with new improvements. The quality of their boats is excellent and I could not fault them.

Slowly but surely they are starting to establish themselves as a major boat manufacturers in the marketplace. I also happen to know that Grant and Yamaha have a couple of developments in the pipeline that will further augment their popular range of craft.

Although the Seacat 465 FC is a small boat, she is very stable and performs excellently. She’s ideal for somebody who wants a good forward console boat at an affordable price.