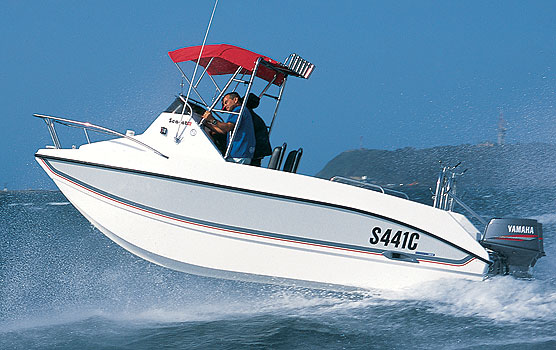 IN the November/ December issue of SKI-BOAT we ran the test on the Seacat 565 centre console, compliments of the Yamaha team and Grantley Read who, as always, are striving to keep up with the boating trends and keep improving their range on a regular basis.

For this issue we tested the forward console version of the 565 which we rode on the same day as we tested the 565 CC off Durban. While the CC version was powered by twin 75 Yamaha two-strokes, the FC came fitted with 70hp motors, also two-stroke.

GENERAL IMPRESSIONS
The first time I saw the 565 FC was on the beach at DSBC alongside the centre console version. It was also just one of those boats that really struck the pose and whose looks grabbed my attention. This is definitely not your normal 18ft 6in craft.

The Seacat 565 FC is very bold looking, having a decent beam and large shoulders which make her look far larger than she actually is, while still keeping it in proportion. Indeed, she’s boat that looked worthy of spending a day at sea on.

Assisting us on the test were Shaun Lavery from Yamaha and Grantley Read, the manufacturer of these craft.

CONDITIONS
It was still winter, which meant we had another ideal day for a boat test off Durban, with a light south-wester blowing to start with, and a moderate swell coming from the east.

TRAILERING
I arrived late due to the traffic in Durban, and the boats had already been offloaded on the beach. Needless to say, I received a tongue lashing as we now had a bit of a push to get the boats into the water. Surprisingly, considering the boat’s size, four of us easily managed to swing both of the models around on the sand and get them through the small shorebreak.

The Seacat 565 FC comes standard on a well-made, galvanised breakneck trailer, and obviously it was a simple enough task to drop the boat off the trailer onto the beach. Trailering at the end of the day was also simple, although I would suggest an electric winch to pull her up onto the trailer. 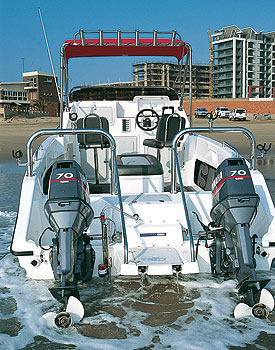 MOTORS AND CONTROLS
As tested, the Seacat 565 FC was fitted with twin 70hp two-stroke trim-and-tilt Yamahas that looked fairly small for the boat, but were more than suitable on the power side.

Controls were the 704 binnacle mount boxes which were very smooth and easy to operate, and the boat had a hydraulic steering system. A point of interest is that Shaun Lavery runs his forward console 565 with the new Yamaha 60hp four-strokes and apparently it performs exceptionally well. This is a big bonus for fuel economy, and they are quiet, smooth and far less smoky than the two-strokes.

PERFORMANCE
Once out through the shorebreak, getting onto the plane was effortless on the 565 FC. The low down torque on the 70hp Yamahas is extremely powerful, and it only took a few flicks of the trims to get the 565 riding smoothly at a speed of around 25-30 knots in the flat water. Power on the 70s was very similar to the 75s, the only noticeable difference being the noise factor, slightly less on these than on their bigger brothers.

Moving offshore into the now rough conditions, holding the 565 FC at a constant speed of 20-25 knots into the south-westerly chop was fairly simple. She still maintained a good, stable, soft and fairly dry ride considering the rougher conditions. Running side-on to the south-westerly chop at higher speeds, the ride again was very comfortable in all areas, with a medium spray coming over the gunnels on the windward side. The forward console definitely gives extra protection from the wind and spray.

As mentioned in previous tests, setting your motor trims to suit the prevailing conditions and raising the windward sponson can eliminate unnecessary spray. Running with the wind and swell, and handling a cross-swell from the north-east, the 565 FC again performed very well at multiple speeds. She remained comfortable, stable and showed no major signs of wanting to broach or plough in the troughs, even with the extra weight of the forward console on the bow.

From stationary and full locking into tight turns to port and starboard, the 565 FC held tight, banking onto the inner sponson on a good turning circle without major cavitation. These are important characteristics to have for surf launching on our coastline. At low speeds the 565 FC was again easy to handle in the rough conditions and maintained a good all round ride, just like the 565 CC.

LAYOUT
On the layout side, the 565 FC has been carefully designed to provide open, uncluttered space, while still having all the necessities to suit the avid deep sea angler. The stern section has a well-designed step-up ladder that slides away neatly into the transom section for times when it is not needed. This flows into the false transom section where stainless-steel hand rails are integrated into dual roll bars. She also has a decent sized livebait well and built-in battery compartments — all neatly fitted out.

The deck on the 565 FC has a non-slip finish and features dual flush-mount fish hatches of a worthy size, a large, raised petrol box which also serves as seating, super high gunnels lined with Flotex with rod racks recessed into them, and dual stainless-steel swivel stools. The forward console area has plenty of space for mounting electrical components and for stowage of equipment. Everything is well-positioned and comfortable to work with.

To complement the console area there’s a full wraparound windscreen with stainless-steel trimmings and a T-top which provides sun protection and rod stowage.

The bow section has dual anchor hatches, finished off with a double wraparound stainless-steel bow rail. One last thing to mention on the 565 is the unique drainage scupper situated on the outside gunnels in the stern. It’s not the standard way of doing it, but I must say that it’s practical and just added that much more to the modern feel of the boat. 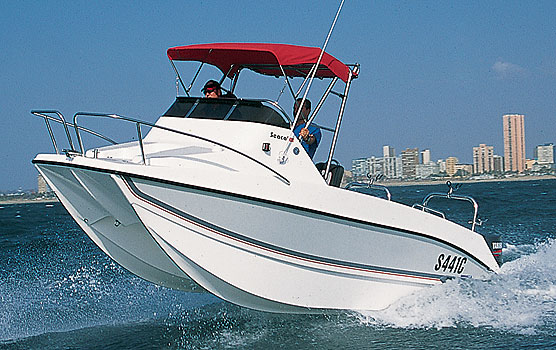 FISHABILITY
The 565 FC certainly has the looks, but most importantly, is also a nice offshore fishing craft. This boat is very spacious for its size, due to the wide beam and high gunnels. As she’s a forward console, you have a very spacious fishing area that is sheltered by the high console and windscreen.

At high and low troll speeds she is easy to handle when maintaining a track and still provides good stability and comfort, whether running into, side-on or with the swell and chop. At both high and low troll speeds the motors sat at relatively low revs for two-strokes. On the drift the wider beam also contributed to the stability and comfort in the rough sea.

An aspect that I particularly like is that the gunnels are extra high, which is a really good feature to have when you’re fighting fish. It also gives extra protection from getting swamped out at sea or getting wet. Yes, high gunnels might make it slightly more difficult to land fish, but personally I would prefer this option.

The 565 FC with its all-round good handling and layout is definitely well-suited to a wide variety of offshore fishing techniques, from trolling and jigging to flyfishing. Being a forward console boat, it provides far more protection from the elements, and the committed angler could comfortably spend long hours at sea. Add a set of outriggers and a few extras, and you would have boat that can handle some offshore big game fishing with ease.

FINISH
Once again Yamaha and Grantley have produced a boat that’s well finished in all areas. A lot of time and thought must have gone into the design of the top deck, as well as the rest of the boat, producing a craft that has a slick look and goes as good as she looks, handling well in all areas.

CONCLUSION
As time goes on, the designs of boats change radically. This is exactly the case with the new 565 forward console. At 5.65m long, this craft fits into the easy-to-tow category: she’s fairly easy to handle on and off the trailer, and is a versatile boat for fishing anywhere.

Just like the centre console version, she’s far from an entry level craft, being more suited to the avid offshore angler, but surprisingly with an entry-level price tag. This is a boat that’s definitely worth a look if you’re in the market for a new cat.