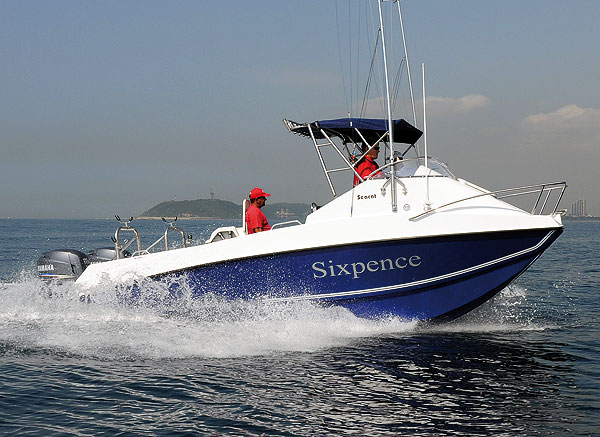 I HAD been waiting since last year for news of the latest addition to Yamaha’s Seacat range, and finally I was told that she was ready to go into full production. I recently met up with Grant Read and Shaun Lavery from Yamaha, as well as Ryan Hansen from Durban Yamaha, to test this baby. I don’t know who was more excited, Ryan Hansen or me, because as a dealer he was eager to put this boat on the market. Indeed, after early trials her reputation had preceded her.
His excuse for being aboard for the test was that we needed his demo safety equipment, but if truth be told, I reckon he just wanted to get a sneak preview of this new boat. 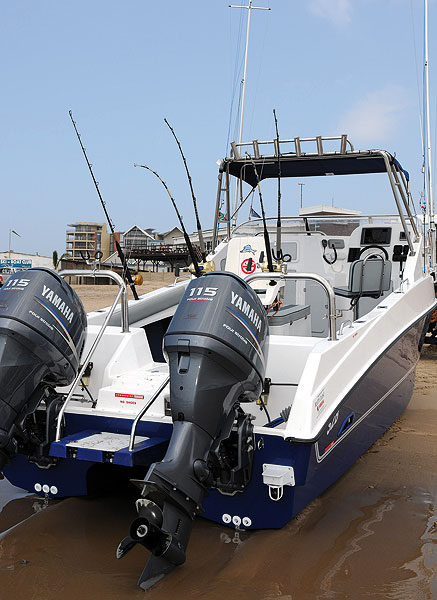 FIRST IMPRESSIONS
When Shaun opened his garage at the Durban Ski-Boat Club I was still under the impression that this was just another Seacat. I couldn’t get a proper look at her in the garage because she took up almost all the space, but when she was pulled out into the sun it was a totally different story.
I left the crew to put up the outriggers and prepare everything for the test, but when I saw her coming down to the beach, wow — what a boat! She’s navy-blue with a white deck, stainless-steel T-top and aluminium outriggers, and my mouth was literally watering to get at her. I could but dream — imagine owning one! — and I’m sure many others will feel the same way when they see her.
As for the Durban Yamaha man, well, Ryan was tap-dancing around the boat as if he owned her. This is a Seacat, but if you were seeing her for the first time without knowing her origin, you wouldn’t know she came from the Seacat stable because she’s quite different from the other models.

CONDITIONS
The conditions were very difficult for a boat test, but perfect if you were going fishing — the sea was very flat with no wind or swell. In fact, the glare of the sun off a glassy sea makes it hard to see where you’re going.
Indeed, you would rather be fishing in conditions like this than trying to get a boat to perform out of the ordinary.

LAUNCHING AND TRAILERING
The Seacat 636 was towed onto the beach by a tractor, but Shaun told me that he uses his Nissan Navara to tow this boat, and everything is within the legal limits. Even up at St Lucia the week before, he had no hassles putting her in the water and taking her out with his normal 4×4.
Now at Vetch’s beach in front of the Durban Ski-Boat Club, pushing her into the water with the tractor did not require much of an effort.
Coming back I ran her up the beach — she slid up as easy as she had glided over the water. Pulling her onto the trailer was a cinch with the 9 000 lb winch. With the neck of the breakneck trailer loose and pulling with the winch, she was on the trailer in a flash.

MOTORS AND CONTROLS
This new Seacat 636 was fitted with twin 115hp Yamaha four-stroke motors with sidemount cable controls. The controls were very smooth, but you have to get used to them especially when taking the boat out of gear, as it’s easy to pull them past the neutral mark. When putting the craft into gear, you also have to be careful that you don’t open up too fast.
This craft had been fitted with hydraulic steering as well as with a Garmin autopilot.

PERFORMANCE
To begin with you have to listen closely then look to see if the engines really are running — that’s how quiet they are. After a while on the boat at sea, when you stop with the motors at idle, you don’t hear them at all.
From standing still to full throttle there was more than enough power to get this boat through any surf. These two 115hp four-stroke Yamaha engines seem to be the right combination for this craft. Although I am a firm believer in overpowering rather than underpowering, I would be very happy with this combination.
Out the hole she jumped onto the plane as quick as a flash without a hint of cavitation on any of the turns from starboard to port. Her turning circle is also fairly tight considering the size of the boat. She turns on a ticky.
Running her in this sea at full throttle without using any trims, she shot up to 60kmph on the GPS speedometer. At this speed most of the big boats I have tested before have tended to pound because of their size and weight. It almost feels like a shudder when the front of the boat enters the water and the water is forced through the tunnel. There was none of this with the new Seacat 636. She just glided over the water, and even at this speed I didn’t experience that braking feeling from water resistance through the tunnel. 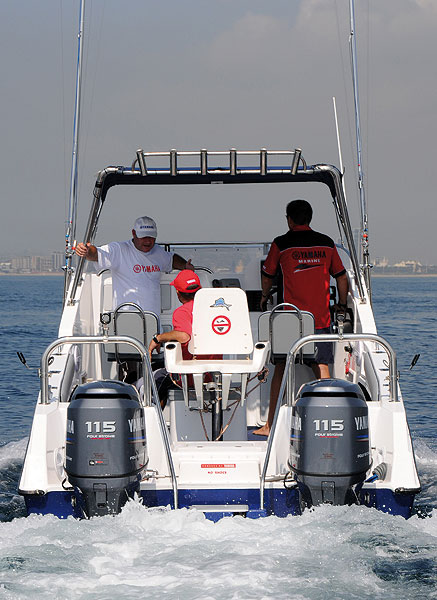 Another thing I have noticed on some boats this size is the sensation of the sides in the front rolling and digging into the waves from side to side, depending on the sea conditions. The Seacat 636 showed none of these tendencies, no matter what speed I was travelling at.
What also impressed me that I didn’t have to adjust any of my motor trims to make her ride level. Normally when testing a boat, I need to lift the bow to get her level for the photos, but this craft ran so proud and the motor installation was so perfect that I didn’t have to carry out any trim adjustments. It was so straight forward and easy — just drive the boat and take the pictures.
The Seacat 636 also sits very high in the water, resulting in her very proud aspect when drifting, and even more so when travelling.
Into the swell I could barely get her to get airborne in this flat sea. With a following sea, even at high speed, I did not once get the broaching feeling or feel that I was travelling too fast. For me she felt like she was one with the sea.
At normal trolling speed we switched on the autopilot and everyone aboard stood back from the controls to see what would happen. Even with all three of us on one side of the boat there was no sign of her leaning to one side, nor was there was any effect on the steering. While we were traveling Grant went down into the cabin to explain the reason for a window in the bow on the nose of the Seacat 636.
He opened it, and next minute he popped half of his body through the window, opened the anchor hatch and started working on the anchor.

LAYOUT
The general layout of the new Seacat 636 is simple and practical for the ski-boat fisherman. The deck is fairly spacious, but the very serious marlin angler might want even more space.
From the stern section the motors, steering system and cables have been fitted neatly and with precision. In between the motors there’s a small step platform with a fold-down ladder for easy entry and exit, both when she is on the trailer and in the water.
The transom section flows into a hatch system consisting of a decent-sized livebait well with a clear viewing window for monitoring your baits.
The deck features two fair-sized fish hatches that can handle long fish like ’cuda and wahoo, as well as big tuna, without them having to fold them in half. There are also two fuel hatches that take 4 x 25 litre cans per side in front of the fish hatches. These hatch lids have been recessed into the deck with a water channel around them to prevent water that might come onto the deck from going into the hatches.
All the deck hatches have flush-mount lids and handles, so you shouldn’t lose any toenails on them.
A fighting chair has been mounted in the centre of the deck, but this could be removed when you’re not marlin fishing. Just in front of that is a raised hatch which also serves as a seating area. This hatch can hold another six canisters of fuel, so travelling long distances or spending many hours trolling wouldn’t be a problem with this boat. 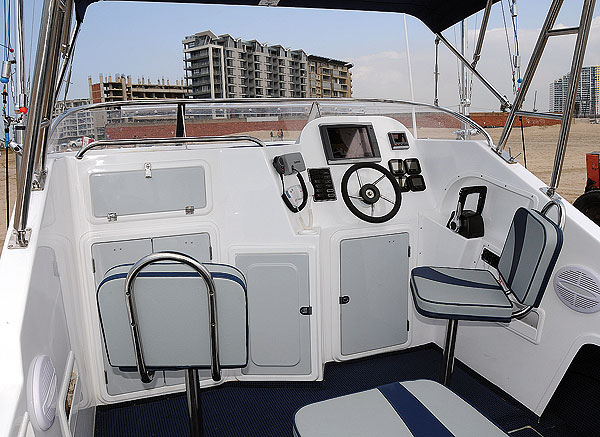 Matching rod- and gaff racks are positioned on the gunnels. The higher gunnels also make it comfortable to lean against when both fishing and travelling.
Moving towards the console, there are two stools for the skipper and a crewman. The console area is neat and spacious with all the necessities — a decent area for fishfinders and GPS units of all sizes, two fishing tackle hatches with drawer systems for organised tackle storage, dry storage compartments and a decent stowage section that opens from the deck side. This can be used for general storage, and it’s through this area that you gain easy access to the anchor hatch.
The top section of the console has a windscreen that gives good protection from the wind so that it’s not blowing into your face all the time. It also has a small reverse bend on the top to throw down the odd chop splash that comes over, stopping it from slapping you in the eyes.
When it’s a bit rough out there you have an assortment of stainless-steel handles and a decent bow-rail to hold onto. The deck is covered with Flotex carpets and the front section has sponge underneath the carpet, especially welcome if you have to stand all day long. Above the console there’s an impressive foldable stainless-steel T-top with extra rod holders.
Lastly, she has been fitted with aluminium outriggers that can be easily folded up or down.

CONCLUSION
In conclusion, I believe the new Seacat 636 will take the market by storm. She is different from the other Seacats currently on the market: she looks different, rides differently and she’ll surprise many fishermen when they see her for the first time or take her for a ride.
For the marlin angler who is looking for a boat that’s towable but is still big enough to take on rough seas, do yourself a favour and take this craft for a ride. I know I was impressed — and I’m sure you will be too.