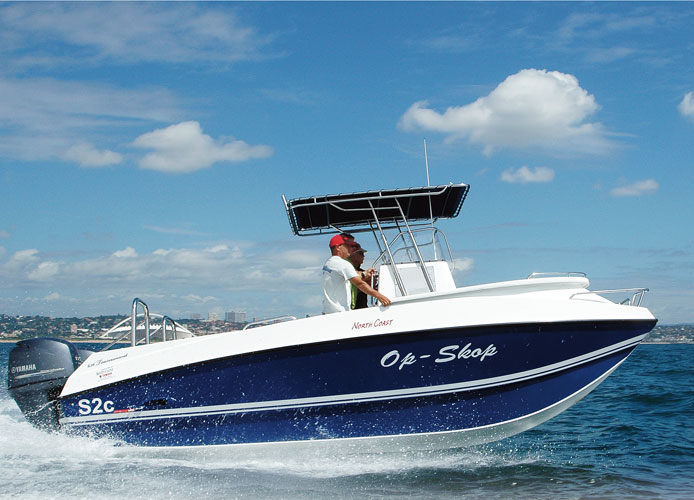 BIGGER is not always better, but in this case it truly is — the first glance I got of the new Seacat 636 confirmed that. My thoughts were short and sweet — if I was into big boats this is the boat I would like to own.

Grant Reed has made a few changes to the hull (and obviously the top deck) of the forward console Seacat 636 in order to produce this centre console craft, and it all adds up to a very impressive product indeed.

I met up with Shaun Lavery from Yamaha as well as the “big boss”, Greg Bennett, and the master builder himself, Grant Reed, at Durban Ski-Boat Club to do the test. Thanks must also go to Ryan Hansen from Durban Yamaha who kindly helped us with setting up and provided demo safety equipment for the test. 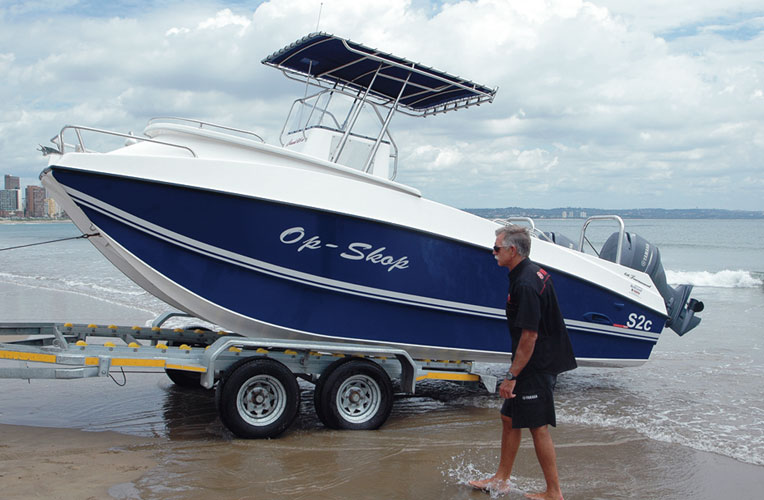 FIRST IMPRESSIONS
This is a great looking, impressive, solid boat which draws attention to herself even when she’s standing on the trailer.

We decided to launch from the beach to assess her launchability into the surf from the trailer. Answer? Easy! With her breakneck, double-axle galvanised trailer the Yamaha guys pushed her into the shore dump and she slipped off easily. The motors were trimmed down, started, put into reverse and there she was, floating like a duck on a pond. This is easily one of the smoothest offloads I have witnessed.

The same was true when we returned after the test. The 115hp Yamaha 4-strokes had been fitted with beach kits, so Grant opened the engines just a little bit and we slid smoothly up the sand. Shaun used his Navara to push the trailer under the Seacat and then his winch finished off the job.

She got back on the trailer just as easily as she’d slid off. Indeed, it was much easier to launch and load this nearly 21ft Seacat than I would have imagined.

WEATHER CONDITIONS
With the amount of rain we’d had just before the test, the most important thing we wanted was a bit of sun so that we could take photos, but on my way to the ski-boat club it was pouring again. By the time everything was prepared and we were ready to launch, the rain had stopped, leaving overcast skies with the sun popping out every now and then. The sea was fairly smooth with no wind to talk about.

Out at sea we met up with Erwin Bursik so that he could help with some photography, and after the photo session Erwin couldn’t resist jumping aboard and taking the Seacat for a ride too. 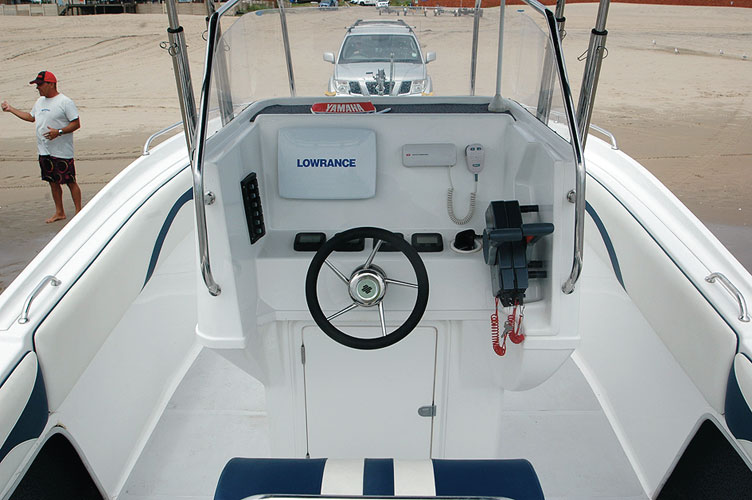 PERFORMANCE, MOTORS AND CONTROLS
The test model was fitted with twin 115hp Yamaha 4-stroke engines with sidemount cable controls. There’s always a lot of discussion about what size engines to put on a boat, but I think Yamaha got it right with this Seacat. The twin 115s gave us more than enough power to get out of the hole fast, even with such a big boat.

The controls were very smooth both into and out of gear, and I really liked the combination Yamaha had put together on this boat. Everything from the engine size and the controls to the fishfinder was ideal.

Out of the hole onto the plane I could not fault her and I could not pick up any cavitation on pull-away or in the turns. Her stability is also remarkable. This really is one of the smoothest boats I have tested. Indeed, I could not get her to pound at all. Into the swell the ride was still very comfortable and dry. Even with two of us in the front of the boat Erwin could not get us wet – he twisted and turned in all directions, but we stayed dry.

Running with the swell and along a swell she did not once give any indication that she would broach. The ride was comfortable and very stable, even at speeds up to 30 knots. As I mentioned, Grant has made quite a few changes to the hull which he reckons will produce a much smoother ride. I guess he was right, because her ride was very smooth indeed throughout the test. 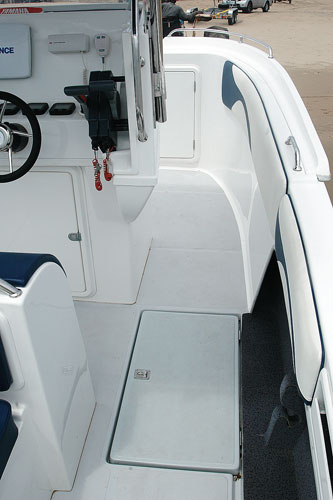 LAYOUT
Starting at the back with the false transom, Grant has made a walk-through with the livebait well in the middle. The bait well also has a window so that you can see your bait and check that your pumps are working. Battery hatches are found on both sides in front of the engines, and there’s enough space on top for someone to sit on if extra seats are required.

The gunnels have been fitted with padding to make it as comfortable as possible to lean against them when you’re fighting a fish. Some drink holders have also been put in the sides.

Behind the centre console Grant has positioned a comfortable bum box with a seat and a hatch behind that. The console has been made to look very modern: when you’re behind the steering it feels like you are in a wheelhouse with everything in its right place.

The sturdy stainless-steel T-top is great for when you’re out at sea and can be lowered when you’re towing to reduce the wind resistance. I think this is the only boat I’ve been on where the T-top does not rattle or make a noise, no matter what speed you’re doing.

Next to the centre console in the deck you’ll find the fish hatches with the fuel hatches just in front of them. They have been spaced to ensure that weight displacement is correct which helps to give the boat a stable ride. The hatches have also been designed so that if water come onto the deck, most will flow off, out the side of the boat.

The front of the Seacat has been designed to take an add-on lip that goes around the nose of the boat. This will enable you to walk round the boat with places to hold on to, and will ensure that any water that does come over the front will not reach the deck but will instead be deflected back down.

well. As with all of Grant’s boats, the finishings are also of a very high standard. 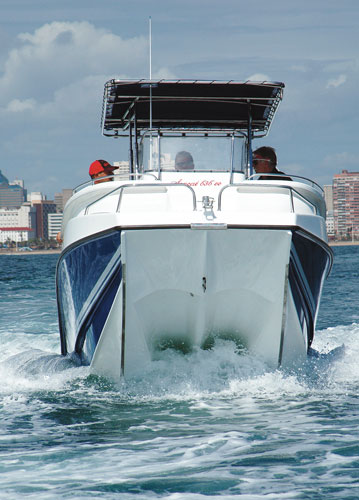 CONCLUSION
For me this is by far one of the best and nicest boats in this range and I would recommend her to any fisherman looking for a craft this size. The Seacat 636 is not a small boat, but you could still easily tow her to Moçambique and fish often if you live in KwaZulu-Natal. She could be rigged for marlin fishing, but is ideal for any type of offshore fishing.

The whole package that Yamaha has put together makes for a very good combination. As an all round offshore boat she will be ideal for any kind of fishing.

Well done to Grant and his team for another craft that will no doubt make a lot of fishermen very happy.