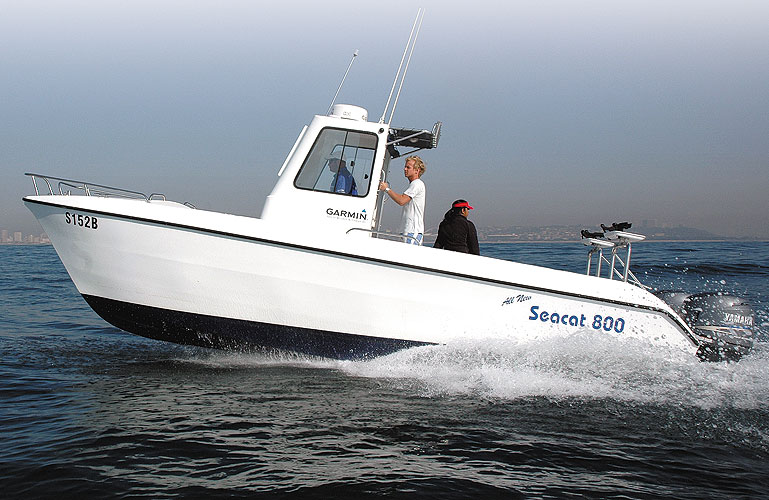 I RECENTLY had the privilege of taking the new big sister in the Seacat range out for a run. When you test a lot of boats, like I do, inevitably there are some you like a lot and others you like a lot less. This was one of those that I really did like, and really enjoyed taking her out to sea.
For quite a while Yamaha has wanted to launch a bigger model ski-boat on to the market. They have done a really great job developing the Seacat 800, and I predict she will become very popular amongst big boat enthusiasts. 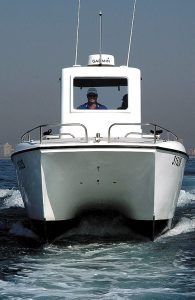 FIRST IMPRESSIONS
I first saw the Seacat 800 from a distance at the Durban Gamefish Classic. I immediately liked the way she sat in the water and how she glided smoothly through the ocean. This was one boat I just had to take for a run.
The next time I saw her was at the test when I got on board, and again I was impressed by what I saw. On these bigger boats I prefer a centre console, and this is what I was presented with.
I must say that Grant Reed has outdone himself with this boat. She was stunning in every visual aspect. I believe Grant has established himself as one of the top boat manufacturers in the country.

TRAILERING
This is quite a big boat to tow, but it’s not impossible with the right vehicle. The test model is kept at moorings in Durban harbour, so unfortunately I cannot comment on the towing aspect.

WEATHER CONDITIONS
For a couple of weeks leading up to the test, the weather in Durban was awful. Fortunately, on the day of the test there was no wind, but the sea was not kind to us, with swells of 1.5 to 2 metres all over the place. However, this gave me the opportunity to test her to her limits to see how she would handle these unfavourable conditions.

MOTORS AND CONTROLS
The demo boat was fitted with twin 115hp Yamaha four-stroke motors with binnacle controls. This Seacat 800 can be fitted with anything from 2 x 115hp to 2 x 250hp motors. As it is, the two 115hp motors fitted for the test pushed this magnificent boat with ease.
Although she had been fitted with cable controls, I had no problem getting her into and out of gear smoothly and easily. 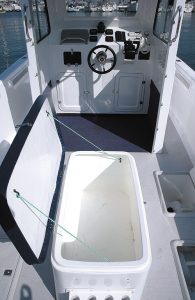 PERFORMANCE
The Seacat 800 jumped onto the plane in a flash — impressive for a boat of this size. People are quick to say that four-strokes are slower than two-strokes, and to a certain extent they’re correct, but on the top-end I prefer four-strokes. After this spectacular take-off and with this much torque behind me, I gained enough confidence in this new Seacat to push her seaward with confidence.
I took her into the swell, and after playing with the throttles a bit to ensure that she did not slam through them, I easily steered her deeper offshore. There was no hassle at all, even when I turned her.
Then, with a following sea she ran true with no slamming or broaching.
Next, I turned her bow northwards towards Umhlanga and ran her parallel to the swell. She behaved much better than I anticipated, with no rolling to the sides or any other indications that it was not safe to travel too fast.
When I turned to starboard and port I could not get her to cavitate. Then I turned and accelerated fast to see how she reacted, and still she was cavitation-free. She reacted very quickly indeed during this aspect of the trial, which shows that she would easily cope with surf launches. During sharp simulated surf turns she proved most willing and able!
The Seacat 800 cruises very comfortably at 25 knots. Although she performed very well with the twin 115hp Yamaha four-strokes, I would like to try her again one day with slightly bigger engines — maybe 140hp twins or bigger. If she performs this well with twin 115hp motors, then I can only imagine she would fly with more power. 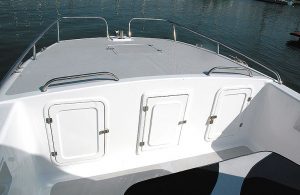 LAYOUT
As the Seacat 800 is a centre console craft, she offers a lot of space all round. She has a state-of-the-art cabin with big widows on three sides, and her navigation equipment and electronics are flush-mounted and look superb. There are two storage hatches in the centre console, and in the bow she has the usual anchor hatch, as well as storage space next to the anchor hatch and under the bow seat.
Flush-mount storage drawers have been incorporated into the gunnels, while fuel hatches are situated on both sides of the transom. The coffin-style fish hatch behind the console provides some seating, with more seats against the false transom.
The only thing that I would add to the test boat’s layout would be a livebait well. This can be fitted on request.

FISHABILITY
This is a big boat with lovely high gunnels, so you would be able to use her comfortably for any kind of fishing. Because she is stable while running fast and slow, as well as on the drift, I’m happy recommending her for all fishing applications. 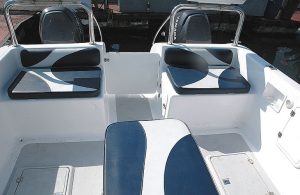 CONCLUSION
As I said in the beginning, Grant Reed has outdone himself and should be very proud of this particular craft. I could not fault her finish nor her performance. Indeed, everything is of a very high standard.
My time at sea aboard the Seacat 800 was thoroughly enjoyable, and she did everything asked of her. She has the looks, she has the ride, she’s comfortable, she’s well-appointed. Yes, she could easily be my fishing partner — any day!