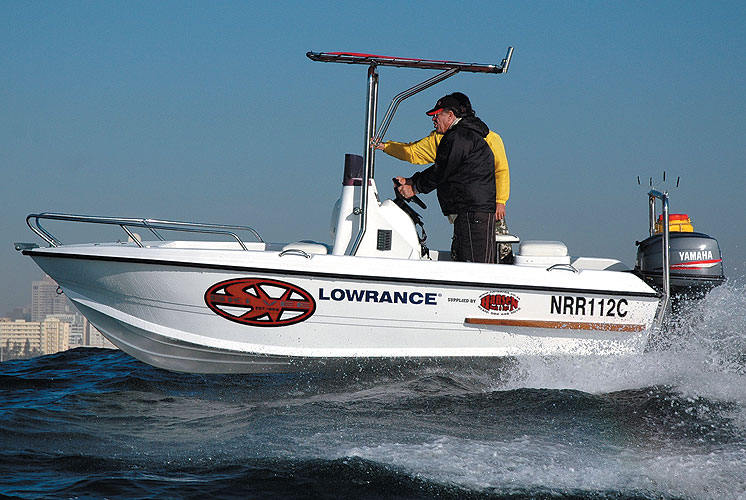 THE new owner of Ski Vee — the company and boat started by the Dave Olufsen more than 40 years ago — Ryan Hansen, approached me a while back when he first partnered up with the Olufsen team. He wanted me to test the Ski Vee 500. Sadly, subsequently Dave Olufsen passed away, but Ryan has been able to continue the legacy of the Olufsen Ski Vee.

One thing I can say about Ryan is that he’s serious about his boats. Some months back already he had asked for criticism and different views on possible improvements to the craft, and many of these suggestions were implemented before the 500 went to test.

This test was quite unique for me as I started my salty career launching on the original 12’ 6” Olufsen. In fact, I owned two of them with 40hp tiller-arm motors and used to venture four-up at times out to Aliwal Shoal spearfishing and general fishing. And yes, sometimes we went a bit too commercial and someone had to swim back through the surf because the boat was a “little” overloaded.

This was all character-building stuff, and I eventually moved onto a 14’ 6” Ski Vee. As a matter of interest, all three of these boats are still operational, the two 12’ 6” Ski Vees are somewhere in Moçambique, and the 14’ 6” is going strong as a mini charter boat run by “Matambo” in Sodwana Bay! That says it all for the longevity of these craft. 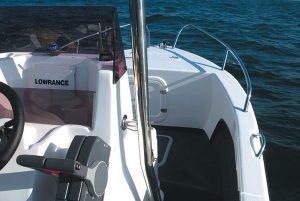 GENERAL IMPRESSIONS
My first impression of the new Ski Vee 500 Sport was simple, seeing as I had been through the evolution of these boats. They fit right in when it comes to the new good-looking boats produced today.

Although the main hull has not changed that much on the new model, there is a vast difference when it comes to the general cosmetics and top deck of the 500. Boat manufacturers know they have to change the style of their craft to suit the changing times, and in this case you can clearly see the difference between the old Ski Vees and the new 500 Sport.

The general look, layout and finish is far more noticeable, but still maintains a feel of the original.

CONDITIONS
For a pre-winter day you would expect good conditions which are generally best for the smaller boats, but alas, not in this case! After having a moderate to strong northeaster blowing off Durban for a solid two weeks, you can well imagine what it was like offshore — not pleasant! Nonetheless, the test had to be done to make the magazine’s deadline, and, well, these conditions always make the tests a little more adventurous for us.

LAUNCHING AND TRAILERING
The Ski Vee 500 Sport comes standard on a galvanised breakneck trailer, which made launching from the slipway at the Natal Rod and Reel Club in Durban bay very simple, as was trailering the craft after the test. 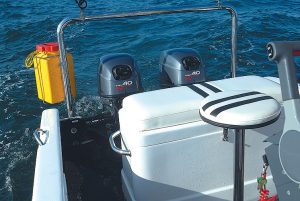 MOTORS AND CONTROLS
As tested, the 500 sported the new Yamaha 40hp two-cylinder, two-stroke, electric-pull start, trim-and-tilt motors. The power was ample for the boat, and although four-strokes are fast becoming the trend, these little two-stroke 40s are still a good buy, particularly as they are so easy to maintain.

The steering system was hydraulic, and even on a craft of this size this is far nicer as it’s smooth and simplifies operations. The controls were standard 703 Yamaha boxes and are also smooth to operate, with everything being appropriately positioned.

PERFORMANCE
For a change this was actually quite a simple test to write, due to the many years’ experience I’ve had on these craft. Sure, they might have been different sizes, but the hull configuration on the smaller ones was similar to the new hulls.

As previously mentioned, there was no shortage of power from the 40s. In fact, you could get away with a far lower combination of horsepower on the 500 Sport. However, as always, my preference is to overpower a craft rather than underpower it. There’s always a time when you need it, and the wear and tear on the motors is far less if they don’t have to be pushed to their limits.

Out of the hole the Ski Vee 500 Sport catapulted onto the plane. As she has trims, setting her up for as smooth a ride as possible was fairly simple considering the conditions. Taking into account the heaviest parts of the boat, I found that having the trim set fairly high created the best ride on the 500. That way it was softer and eliminated spray.

In the rough easterly conditions — which would not be one’s chosen conditions for offshore enjoyment — I could maintain a fair speed of 12-15 knots in all directions to the swell and chop before it became uncomfortable.

As far as surf launching capabilities are concerned, I have done many launches on these boats through Umkomaas over the years, and with the correct motor combination, like there was on this one, you can nip through the surf fast and drive around the waves and not through them. Besides that, we took many a “klap” where the Ski Vee held its own and never rolled.

When testing the Ski Vee 500 Sport at lower speeds and for stability, I decided to put the show rods to good use seeing as they had lures on. While we waited a good hour for another member of the party to join us, I put out two sticks looking for a luck fish. I set the speed to approximately six knots and trolled for a good 35 minutes in all directions to the prevailing ocean, during which the general comfort levels and control of the boat were fairly simple to maintain. Bear in mind, in these conditions you cannot expect any boat to act like a luxury liner. 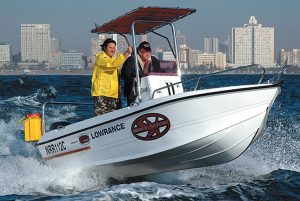 LAYOUT
The Ski Vee 500 Sport has a simple and spacious layout, but is far more stylish than earlier models. In the stern motors and cables have been fitted neatly, with cables running under the deck to the console. There is a large rear raised hatch seat with a skipper’s stool in front of it, and the small, stylish console has a fore seat. A T-top and rod holders complete the console area.

The deck of the boat I tested was fully carpeted with Flotex which is gentle on the feet and fishing equipment. The gunnels are at a reasonable height to suit fishing as well as spearfishing, and you can have rod/spearfishing racks integrated, plus they have mini stowage compartments built in.

In front of the console there’s a flushmount fish hatch which leads to the bow section incorporating extra stowage and an anchor hatch. An assortment of stainless-steel fittings complement the craft.

FISHABILITY
As previously mentioned, trolling off this craft was comfortable. I regularly reminisce over one late afternoon catch on Aliwal when a friend and I cleaned up on an assortment of gamefish on one of these craft. If we caught the fish then they fish well!

On the drift they are reasonably stable, but don’t forget that they are small boats. As it’s a centre console craft, moving around is simple enough when fighting a fish. 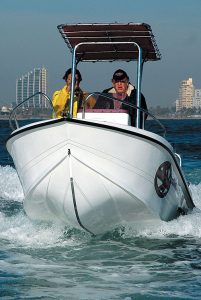 FINISH
In comparison to the older Ski Vees, there is a vast improvement with these craft which have a more modernised top deck and many refinements that finish off the Ski Vee 500 Sport nicely.

CONCLUSION
This test was a trip down memory lane for me, and it was very pleasant indeed to be on these boats once again. The new Ski Vee 500 Sport is one of those boats that you will always see in use offshore and inland throughout South Africa. She’s a lightweight, simple, practical and versatile craft, well suited to many water applications, and reasonably priced as well.