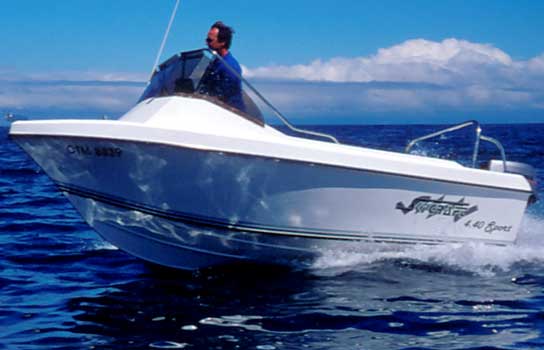 I have never known Cape Town-based boat builder Chris Teer to follow convention. “Man alleen,” as they would say in Afrikaans. He thinks, he designs, and then his ability to sell — combined with complete confidence in the boat he has designed for a specific purpose — ensures the craft is a success.
The SkiCraft 440 Sport is just such a craft. Instead of following the logical route and using a very successful design to “go bigger”, Chris did a 180° turn and went smaller.
Chris was convinced that what the market needed was a more affordable craft that offered ample storage and deck space, could be powered by a pair of 25/35hp motors, could easily be towed by a family car and, most importantly, was extremely seaworthy.
“There is more to life than just fishing, especially when you’re bringing up a young family,” were his words, “and the SkiCraft 440 Sport will cater for the full array of on-the-water boating activities.” Indeed, what better way is there for a whole family to play together? 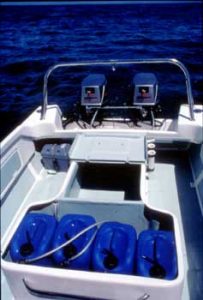 GENERAL IMPRESSION
At a distance the SkiCraft 5,15m (see test report in the March/April 2002 issue of ski-boat) and the 440 Sport look identical. In fact, so much alike are they that when looking at the many photographs I took during the test, the only way I could distinguish between the two was by the different signwriting on the craft tested.
Even the way she rides the water when viewed from another craft is identical, with her proud bow, prominent strakes and minimal wetted area when planing at speed all stamping her as being a chip off the old block. What’s more, her performance and handling is also just as good.

CONDITIONS FOR TEST
The sea off Gordon’s Bay was fairly churned up after a north-westerly that had blown through the night and was still blowing in the early morning. A period of calm followed, then the south-easter started.
As many will know, the wind from the south-east doesn’t mess around in the Cape. Once it had started it got progressively stronger by the minute, eventually chasing us into the protection of Gordon’s Bay harbour.

LAUNCHING AND TRAILERING
I must reiterate once again Chris’s philosophy regarding launching and trailering, especially as it applies to Cape slipways: make it as easy as possible for a husband and wife or father and son to launch and retrieve their craft with minimal effort, and you’ll increase their boating pleasure tenfold.
It is when tension mounts and shouting starts during the launching or trailering of a craft that family enjoyment ceases and the desire to go boating disappears out the window.
The lightweight, high-speed trailer carrying the SkiCraft 440 Sport certainly lived up to these requirements. Launching it into Gordon’s Bay and reloading it was so quick that Chris didn’t even have time to shout at me.
Should one want a heavy-duty trailer for beach launching or extended trips on rough roads, then obviously a more robust trailer is required. Chris has these available as an option. 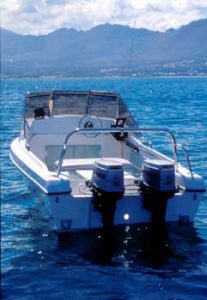 MOTORS AND CONTROLS
Chris had selected a pair of 30hp Mariner two-strokes for the new 440 Sport. Years of experience with the semi-commercial version of the craft had taught him that a pair of 25hp or 30hp motors suited the craft perfectly. What he had also learnt is that putting more power onto the transom caused her performance to become over sensitive. I will elaborate on this aspect under handling.
The motors were electric start, but they also incorporated a pullstart as no doubt more of the models are sold without the electrics. On the 440 Sport they were merely an additional safety device — my days of pullstarting motors are long gone.
Swinging 13-pitch props, these motors gave a lot of out-the-hole performance and sounded incredibly sweet as we sped across the ocean during the trials.
The controls and steering are comfortably positioned on this craft so that a normal sized skipper doesn’t have to stoop to skipper this craft.
Chris has used a cable steering on the boat and it was perfectly adequate. I experienced no problem pulling her out of sharp turns both to port and starboard. In fact, she was a lot of fun to skipper, with the directness of the steering adding a lot of “feel” to the task.

HANDLING
It is a little misleading of me to say that this is a new design when in fact the design is only new from deck up. The original SkiCraft 440 was first built in 1982 as a centre console — what Chris calls a “weekend semi-commercial”. Originally designed to carry three crew and 350/400kg of fish, and plane on two 25s, it was extremely popular in the Western Province and 315 of the commercial version have been sold.
In line within the affordability criterion he set all those years ago, Chris felt it was time to adapt this model to a forward console version that provided an affordable entry-level craft for the recreational family man who plans to go inshore fishing.
By George, he’s done it! Being a neat, good looking craft with inherent seaworthy characteristics, she certainly fulfils those requirements.
Looking back, perhaps I tested the four craft in the wrong sequence, starting with the Vision 24, then the Aquascape, the SkiCraft 16.6 and leaving the 440 Sport until last. I hope that I have been able to separate the four trials properly in my mind and not blemish the capabilities of the smaller craft by unfair comparison.
I boarded the SkiCraft 440 Sport out at sea during the onset of the south-easterly that had just started to put a small chop on the water’s surface. This provided me with ideal conditions to play with the smaller boat.
Every time I get into a small craft, feel and hear the sound of small motors and experience the effect of direct steering, I get excited and have a strong sense of déjà vu. The experience takes me back to the early days when small skis with tiller steering and big surf were the order of the day. It was the age of real ski-boating.
I loved the 440 Sport; she felt alive, she felt safe, she performed beautifully and, above all, she was a lot of fun to skipper. But back to specifics … 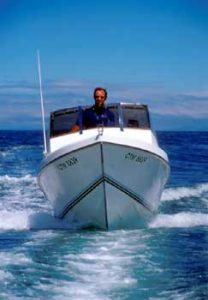 I resisted the urge to throw her around in tight manoeuvres, which was my initial desire, and instead took her for a long run into False Bay with the south-easter on her port beam.
In doing this I was endeavouring to measure, at various speeds, how her heavily straked hull allowed her to ride the water. Chris had told me that this straking gives the hull a lot of lift and reduces the wetted area, but excess power forces her to lift too much, thereby reducing the wetted area to a point where she is riding with very little hull in the water. Combined with motor torque, this makes her laterally sensitive.
The twin 30s supplied all the power I needed, so I can confidently concur with the above statements.
During the run she rides with her bow very prominent and throws water fairly far aft. When the sea got up a bit I did notice a little spray being thrown, especially when I couldn’t use speed to get away from wind blowback. Into the sea — even a fairly big chop — she rides well, using her straked semi deep-vee to maximise the performance.
I did, however, reach a point when the sea got too cheeky for a craft of this size and I headed back into calmer water. On the return run she took the following sea very well, especially as I had to angle her ride so that the wind and sea were on her aft starboard transom corner. She tracked well and didn’t show any major tendency to yaw.
Once I reached what I call fishable water — not the run-for-home stuff we were in — I put her through slow troll and fast trolling trials, all of which she coped with while providing a lot of comfort. While drifting, I found the craft surprisingly stable for a monohull of this size, and I have no doubt that her stability would only be augmented with a hatch full of fish.
Then came fun time — time to throw the craft around and to judge how good she would be in tight surf. Indeed, I had a great deal of fun with the 440 Sport: leaning into the turns she came about extremely tightly without major stern slippage, and once through the turn she came out the hole very quickly with no cavitation.
Finally, with two of us aboard, I was able to get her to plane on one motor with the other tilted. 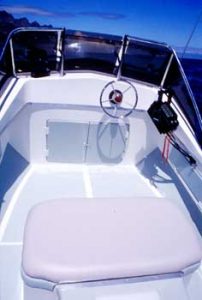 DECK LAYOUT
Like her big sister, the SkiCraft 440 Sport’s top deck configuration is designed to maximise protection against the elements of the notorious Cape, at the same time ensuring that she is still good looking.
Using modern techniques of glassfibre moulding, Chris has created deck, top gunnel, motorwell and console with style and “rounded” features that not only greatly enhance the craft’s appearance, but also make her very user-friendly when riding and fishing in bumpy weather.
The deck space has been designed to allow the crew to move about easily while fishing, yet have sufficient hatch/hold space for fish and fuel. The accompanying photographs show the four-tank fuel hatch stretching laterally across, but marginally forward of centre, to keep the centre of gravity as practically positioned as possible. Incorporating the fish hatch directly aft, yet attached to the fuel hatch, ensures that weight distribution is well maintained in terms of fuel usage and fish catches.
Upfront stowage and side hatches under the gunnels provide adequate stowage room for a craft of this size. The deck itself has the non-skid finish that is favoured by the gumboot brigade of Cape fishermen.

FINISH
As I’ve already intimated, the well designed above-deck layout and construction enhances the craft’s appearance. Add to this the quality of the workmanship and moulds, and you get a solid, well finished and attractive craft that will look good on the water and on the beach..
Hardware fitted to the SkiCraft 440 Sport was substantial and well made, without accessories being bolted on for the appearance sake or simply to sell more accessories. This ensures that one of the initial objectives — to produce an affordable craft, without sacrificing strength, comfort or safety — has been met.

CONCLUSION
A craft that has seen the service and withstood the rigours of the commercial fishing fraternity — as well as becoming so popular — must have an inherent something. In each instance the hull design, being of primary importance, is carried forward, while the top deck changes its overall appearance, making it a totally new boat with well-proven lineage.
In summation, the SkiCraft 440 Sport is indeed an ideal craft for someone starting off boating and offshore fishing, and is a craft that the entire family can enjoy.