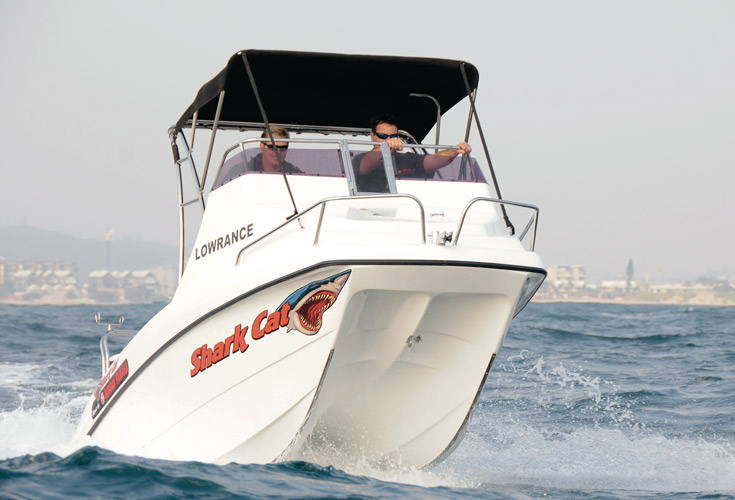 THIS new boat started off as a dream and took nearly a lifetime to finish — or at least that’s what it felt like! Ryan Hansen (above) from Durban Yamaha, a man I have known for many years, had this dream to add a cat ski-boat to his Ski Vee range.

I can still recall when Ryan started out in the business of boating before becoming Durban Yamaha, and his sole offering was the popular Ski Vee boat. It is amazing to see how he has progressed over the years and how he has grown from strength to strength. Ryan has now become a force to be reckoned with.

Once Durban Yamaha had been established he added the whole Seacat range to his arsenal. However, he never gave up on his dream of his own house-brand cat that would join his Ski Vee range.

The dream finally started to become a reality when Ryan and boat builder Vasy Naidoo pulled their first hull from their custom mould. With the top deck’s design still undecided, they needed to assess how the hull performed. As an interim measure they fitted a wooden deck, attached two Yamaha motors to the transom, and off they went.

The question arose about what to use to simulate top deck weight. The lights came on for a moment and sandbags it would be. With the hull now packed with sandbags, off they went to test the hull in Durban harbour, to assess how it would ride with varying weight displacements for when it came to designing the top deck.

Finally, after five years of R&D with their craft I found myself at Natal Rod & Reel in Durban harbour, looking at the finished product — Ryan’s dream had become a reality and the 16ft Shark Cat was ready for testing.

The last few ski-boats I have tested were 17ft and bigger, and because I hadn’t done a 16ft in quite some time, I was keen to assess how she would stand up to the rigours of the open sea. I was also keen to give Ryan and Vasy my opinion of their hard work.

I liked what I saw. The only hard part was that I had to test a bigger boat before the Shark Cat. It is always difficult to test a smaller boat immediately after a bigger boat, as one has to be careful not to be more subjectively critical, because everything suddenly looks and feels smaller.

WEATHER CONDITIONS
The weather played along very nicely, with barely any wind. The swell was a little wishy-washy and all over the place, but this in fact helps me test a boat more thoroughly and makes my work easier.

However, for Erwin Bursik behind the camera on an accompanying boat, it made life much more difficult. Indeed, it’s not easy to maintain control of a camera in conditions like that.

LAUNCHING AND TRAILERING
The offload into the water from the slipway was smooth and easy. That, together with retrailering her, is one of the first things that I look at. If not easily accomplished, it could make your life a living hell.

This was not the case with the Shark Cat. Her trailer is custom-built, so loading and offloading her was a cinch. 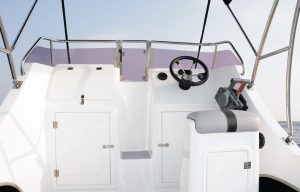 MOTORS AND CONTROLS
This demo model was fitted with 2 x 60hp Yamaha 4-stroke engines. For a 16-footer that’s a lot of oomph.
Her controls were perfect and a pleasure to operate — side controls with hydraulic steering, making for very smooth operation. 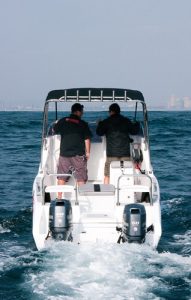 PERFORMANCE
Indeed, there was no shortage of power on the pull-away and getting her onto the plane was a breeze. I then put her through her paces and I must say that she was remarkably dry for a 16-footer. I would have thought that in conditions like this we would have experienced some spray over the front, but nothing — we were dry.

Her figure-of-eight was performed to perfection, an indication that the motor installation was spot-on. One would have thought that the 2 x 60hp motors would have been too heavy on the transom, but to the contrary — they actually complemented her performance.
On a slow troll of two to three knots up to around 15-18 knots she was very comfortable and stable, and she stayed very dry. Indeed, her performance was flawless.

She was out of the hole in a flash, and being very light on the water, she turned very easily and remained comfortable. Then, in simulated surf conditions, she came through with flying colours, leaving me in no doubt that surf launching wouldn’t present any problems.

LAYOUT
Her layout has obviously been thoroughly thought through. Because of her size, care needs to be taken with this aspect to provide as much free space as possible.

With her layout Ryan and Vasy have got it right. To start with, they’ve ensured easy access to the anchor hatch in the bow. Her dash is big and spacious enough to accommodate all your gauges and electronics, with enough storage space in the front for all the extra equipment and gear that you cannot go without.

For seating they have fitted a single bum box for the skipper. I would have preferred another alongside for a crew member, but the choice is yours if you are prepared to give up that little bit of deck space for another bum box.

In the middle of the deck are the fuel hatches that could easily take four 25 litre fuel containers. Ryan wants to change it so that it can hold between four and six fuel containers.

Next to the fuel hatch in the deck are the recessed fish hatches. They are big, with ample space for your fish after a hard day’s fishing. Gunnels are knee-height for comfort whilst walking around the boat, as well as making it easy to lean against for support when fighting a fish.

At the stern the false transom houses battery hatches on both sides, with the livebait well in the middle. One feature that caught my eye was the bait boards under the trolling bars. It’s something new and different which, coincidentally, were fitted to both ski-boats I tested that day. I like the idea.

All the rest is pretty standard in terms of ski-boat fitments, including a stainless-steel T-top with rod holders on top. Indeed, the sky’s the limit as far as preferences are concerned, and Ryan can custom-build a Shark Cat for you — just the way you like it. 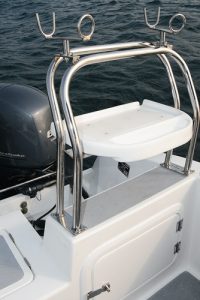 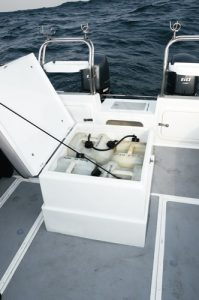 CONCLUSION
This is an ideal entry-level boat from a very reliable dealer and well-known boat builder. There has been no compromise in quality, yet she’s offered at a very good price indeed.

This is definitely one of the boats in the 16ft class range that I would recommend for any fisherman. Take her for a test run yourself and see what I mean. Well done to Ryan and Vasy — you have done yourselves proud.