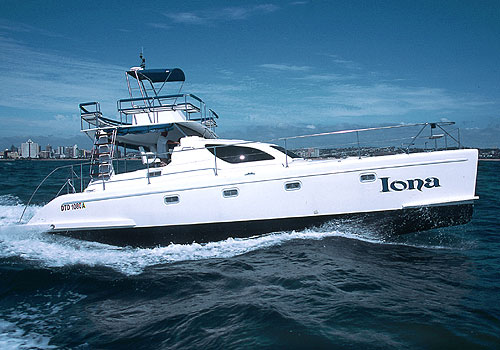 IS there more to boating than just fishing? It’s a hypothetical question that I, as a dyed-in-the-wool fisherman, have of late been pondering at length. The source of this pondering was two-fold. Firstly, a week spent with my wife, daughter, son-in-law and grandchildren on a 40ft cruising yacht in the Bazaruto archipelago. Secondly, watching a new breed of craft — the big cruising catamaran — that is starting to make its appearance in my home waters off Durban.

As with most things new and different, I initially queried such a craft’s practicality. The fisherman inside me automatically looked at it from that point of view and decided that it was not the ideal fishing machine. What’s more, big boats are acquired to catch big fish, and to attempt to target marlin from big cruising catamarans would be stretching it a tad.

But then, as I said, I spent a week fishing and playing on a big cruising catamaran, Yacht Taylor, in the waters off Bazaruto and came to realise there’s fun aplenty to be had on a big boat — even without having a line in the water.

With this seed sown in my mind, I began taking more interest in this style of craft and further researched the world of power cruising. Soon afterwards, Hans Dettman of Boat Sales asked me to review the new Power 400 Catamaran that he was marketing from his Durban-based boating business.

I was keen but still apprehensive, for before I began I would need to review the main criteria on which I base all my big craft reviews — fishability. It was a challenge, and now that I’ve done it, I’m glad I did. 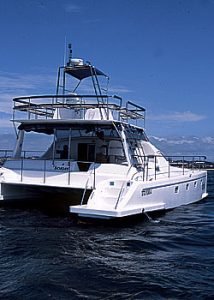 In a nutshell, the Power 400 Catamaran is a cruising yacht hull with most stays, wires, ropes and sails left off it, and two reasonably-sized diesel motors fitted. A flybridge or upper helm station is constructed above the main saloon.

As I walked through the cockpit area of Iona and into the main saloon, there was a feeling of dejá vu. “She’s very similar to Yacht Taylor,” was my immediate reaction. I now had the basis on which to commence my review as there was a trace of experience to draw on, having lived in similar surroundings for nigh on a week.

At the outset, lack of all the yachting paraphernalia, of which I know and care little, seemed to free the craft of snags and made walking around her, especially to the foredeck, infinitely more practical.

Having slipped moorings at Wilson’s Marina, Durban, with Hans at the helm, I was keen to see how this craft — big both in length and beam — manoeuvred out of those tight surroundings and narrow channel to get out into the bay.

To say I was impressed would be an understatement, and after our return — when the wind was blowing from the north-east at a steady 20 knots — I was pleased Hans was at the helm and not me. Both times he manoeuvred her perfectly, which I think was due more to the skill of the skipper than the manoeuvrability of the craft herself.

In exercises such as had to be performed, with so much freeboard and two massive sponsons to pull sideways without bow-thrusters — especially when returning to moorings — an experienced skipper was required, and obviously, a craft with the ability to respond to the forward and reverse of her engines to accomplish such a task.

Once in Durban Harbour’s Maydon Channel, I look over the helm and for a short distance pushed the throttles right forward to experience maximum thrust. This was an exercise I was unlikely to do out at sea due to the bumpy conditions I knew prevailed beyond the protection of the harbour entrance. We managed just on 18 knots into the north-easterly wind.

With the two Volvo 160hp motors topping out at 3 500 revs and her semi-displacement hull almost getting onto the plane, she displayed a characteristic which I was to notice throughout the morning at sea — one of incredible stability.

While photographing this huge craft and watching her attack the easterly sea that had been building up during the preceding two or three days was, to put it mildly, very interesting. Because of her long profile, big sponsons and high tunnel, she cuts through the swells and overrides the troughs, unlike a large monohull that shoulders over such peaks in its forward momentum.

When I was back at the helm of Iona and experienced for myself the way she handled this big sea, I could properly compare the difference between a craft of this style being thrust forward by the power of her motors and the forward pull of the similar style and sized yacht in which I had run the length of Bazaruto Island in a strong south-westerly.

Again, the stability, especially laterally, was common to both these types of craft I have now experienced. 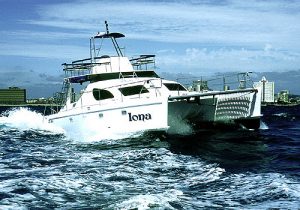 Initially, until I got the feel of the Power 400 Catamaran, I ran her in a starboard beam sea, during which I tabulated the SOG readings shown below. Only then, when I edged her bows round into the head sea and wind which was blowing at 18 knots, did I really began to fully appreciate this craft’s ability. Again, the RPM to SOG tabulation below is set out to reinforce the minimal effort in comparison to the headway we made. I was very impressed with the way she powered forward and how comfortably she rode the rather bumpy sea.

On a reciprocal course, both at speed and the so-called 8-knot cruising speed, she glided forward effortlessly. During this run I even scrambled down from the flybridge over the forward saloon roof to see what it felt like being on the front trampoline. It was a great feeling and I felt surprisingly safe while doing this, as I did when I also tried out one of the forward seats mounted right on each of the bows within the bowrail configuration.

This brings me to the cruise of this style of craft and its user-friendliness for lovers of the sea who don’t necessarily, have fish uppermost in their minds. As I have fished and caught fish from a yacht, I am fully aware of both the practicalities and the drawbacks of this type of fishing platform. But you can still have loads of fun and catch a lot of fish. 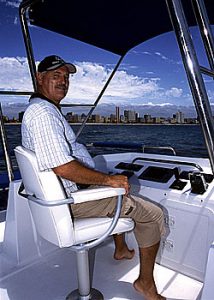 However, when it comes to social cruising, the Power 400 Catamaran opens up opportunities that could never be available on the sportfisher-style craft we are so familiar with.

The aft cockpit is large enough to comfortably entertain six adults, and with the skipper at his helm station not two metres away, he will still feel part of the crowd. It is well-protected from wind and spray and has an awning covering the entire area. On a flat ocean, and if some are fishing, there is a wonderful open, forward deck area with a large, sturdy trampoline (surrounded by sturdy railings for safety) on which suntanners can bask to their heart’s content. It’s a great conversation area for those not fishing to enjoy during their time at sea.

The flybridge is also extremely spacious, with a lot of seating and protection from the sun.

It is, however, the luxurious, spacious inside of the Power 400 Catamaran that makes this craft ideal for day trips as well as live-aboard cruising. Whilst there are a number of permutations available, Iona’s owner had settled for a large kitchen and comfortable lounge area in the main saloon that was neat and practical, without going overboard with furnishings and accessories.

A master suite and bathroom has been created in the port sponson. From living aboard a similar craft, I appreciated the space in this area, both with regard to the sleeping arrangement and storage cupboard, as well as the style of the bathroom. 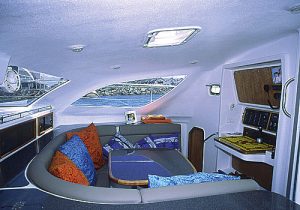 In the starboard sponson there are two good-sized guest cabins with centrally situated heads. They both appeared to be designed for comfort.

Up forward in each bow section is a small, single berth cabin, which would be ideal for the younger member of the family and can be accessed either via the main “queen” cabin or the forward deck hatch.

During the limited time I spent aboard the Iona, it was extremely difficult to see, let alone experience, the full range of facilities and accessories that have been designed and built into this craft. Let me assure you, there are many, and if one views the specifications’ document, this alone leaves one in awe when one tries to grasp just how much goes into a 40ft Power Cat.

Bearing in mind my limited exposure to this type of craft and the standards of construction and finishes demanded by the yachting fraternity, I was, however, impressed not only with the superficial finishes, but also by what was behind and underneath this veneer.

However, seeing as this is the first review of a craft of this type in this magazine, I still believe that in the interest of our readers, the sportfishermen of South Africa, views on her fishability are relevant. It is easy to look at the accompanying photographs and evaluate the on-board social capabilities and facilities of this craft. However, one needs to take her fishability into account, since this is after all a fishing magazine, and many a future owner of such a craft will want to do just that — fish.

From the experience gained during my time on Yacht Taylor, light tackle gamefishing — primarily with swimming/diving-style lures — is both practical and lots of fun. With the correct rod holders, up to six rods can be deployed. Bait fishing can be a little more difficult, unless trolling on one motor is possible, without damaging the gearbox.

What can become interesting is when a big fish is hooked and the angler has to move up forward to follow it. However, most fish up to 30kg shouldn’t present a problem and can be fought from the craft’s transom rail. Gaffing would be easy, using the dive platform on the rear of each sponson.

So, yes, if I owned this craft, I would happily fish her — as seriously as ever — while family and friends got on with all the other recreational pastimes one can think of while at sea on a craft of this size. Besides, with the prospect of newly-caught fish in the coolbox, what could be better than a hearty lunch freshly prepared aboard, instead of the usual boat fare of Tupperware-packed sandwiches.

My time aboard Iona was an experience, as well as an education. I can honestly say I now know why some anglers have gone the route of craft such as the Power 400 Catamaran. It is certainly a craft one’s wife would adore, friends would like and the skipper can fish from — and also enjoy. Indeed, if you love boating, if you love the sea, her creature comforts alone have much to offer.