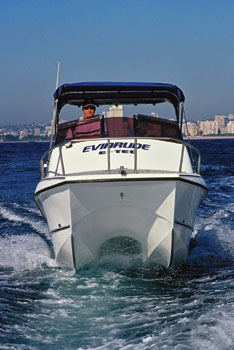 Tony Lindhorst was even more excited than normal when he phoned me to organise a boat test on Waterworld’s new Pursuit 19. His excitement stemmed not only from seeing the restyled, new model Pursuit 19, but also the fact it was to have the latest 90hp Evinrude E-Tec motors fitted. These motors had just landed in the country for the first time.

Some time ago Ronnie Arenson, CEO of Waterworld, and Tony from Monaco Leisure — an associate company — decided they were going to totally redesign the Pursuit 19’s top deck and helm station console, and that a few modifications were also to be introduced into the hull design to reduce tunnel hydraulics.

It’s a long time since I last reviewed this hull — mid-1992, to be exact — and I was keen to see and feel the difference between that and the 2004 model, as I have always rated this hull very highly. 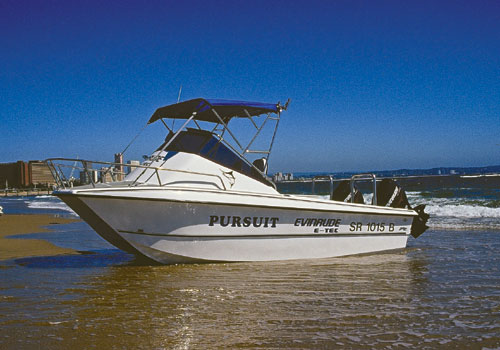 GENERAL IMPRESSIONS
I first set eyes on Waterworld’s Pursuit 19 on her early morning arrival at the Durban Ski-Boat Club.

While the hull styling is still unmistakably the same, the above gunnel design has changed. It is not only neat and trim, but also extremely good looking and, dare I say, more practical and user-friendly than the previous design.

Apart from the craft herself, my attention was immediately drawn to the slim-styled, new Evinrude E-Tec motors with their metallic blue-black livery.

CONDITIONS FOR TEST
The north-easterly awoke with the dawn, and even though we made an early start, it still beat us onto the water. It was not a very strong north-easterly, but just strong enough to push up a sea that curtailed any craft the size I was testing from really showing off her prowess in high-speed work.

With a north-easterly, whether you are trying to get on the plane, into it or running away from it, it has the knack of pushing up seas that make it uncomfortable no matter what you try.

LAUNCHING AND TRAILERING
Tony towed the Pursuit 19 on a substantial, high-speed trailer from the Waterworld showroom in Randburg to Durban North in seven hours.
That’s not bad going, and it indicates to me that this rig must tow beautifully to attain that sort of average speed, especially since it was being towed by a relatively small tow vehicle — Tony’s 3-litre Nissan.
To make towing even easier, the stainless-steel frame holding the canopy is collapsible, thus allowing it to be dropped to deck level for the tow, and then re-erected using only a couple of bolts.
Between Tony and SKI-BOAT’s Mark Wilson, the Pursuit 19 was deposited into the small surge break off Vetch’s with ease, and while Mark was left to turn the boat around on his own, Tony parked the vehicle. I viewed the operation from a safe distance — out at sea aboard SeaLord.

The retrieval was, to say the least, unusual. After beaching her for photographs, she was relaunched for prospective clients to take to the Point Yacht Club slipway via the harbour mouth for a “drive-on” retrieval. It was so easy. I only wish we beach launch/-retrievers could do it like that every time we went to sea. 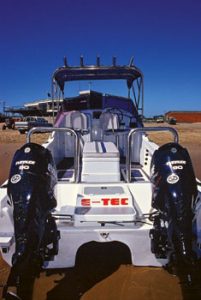 MOTORS AND CONTROLS
As I said, this craft was fitted with 2004 model Evinrude E-Tec motors. Throughout the photo session I watched her perform as Tony threw her around the ocean, extracting what appeared to be impressive acceleration from slow speed starts.

When I got behind the wheel and experienced the motors through the binnacle-style side-mounted throttle controls, I felt that they really are more lively than other motors. Swinging 17-pitch props, their out-the-hole performance was outstanding. As I gained more experience with them, I became more and more aware of the need to be more gradual with the throttle lever. When it came to tight turns and simulated surf conditions, I quickly learnt not to open the throttles fully when half would suffice and provide the craft with more than sufficient out-the-hole acceleration.

Even more interesting, these motors had never run before other than in Waterworld’s workshop. Not only did they start first time after launching, but they felt smooth and already “run-in” during the entire test.
Above all, they were extremely quiet, even when compared with 4-stroke outboards.

The SeaStar hydraulic steering system fitted to the craft was also a pleasure to operate. It seemed smoother and lighter than other installations I have operated recently.

HANDLING
The Pursuit has been around a long time, and if my memory serves me correctly, the first test I did on the original 16ft was at Mapelane way back in the mid-eighties.

There is a certain feel to this craft that I re-experience each time I get to ride one. It was different to other cats back then, and I got the same feeling when I started running Waterworld’s latest Pursuit 19. One of the negative aspects I still remember — the hydraulic noise in the tunnel — has been totally eradicated with the innovative, new tunnel design.
However, despite the changes, she still retains her extremely good, tight turning and out-the-hole capabilities for which her lineage has been noted. Add to this the thrust imparted by the 90 Evinrude E-Tecs, and one has a rig that will give a skipper a lot of confidence in the surf.
My days of high-flying with small boats in choppy conditions are over. I have come to the conclusion that, in reality, apart from providing an adrenaline kick, this exercise proves nothing. As I watched Tony “stunting” this craft, I was happy to be behind the camera and not skimming from wave crest to wave crest as he did.

Once I got behind the wheel the first thing I did was define by trial and error her optimum cruising speed in that particular sea condition. This was a speed I could retain for say an hour’s run to a faraway fishing hot spot. 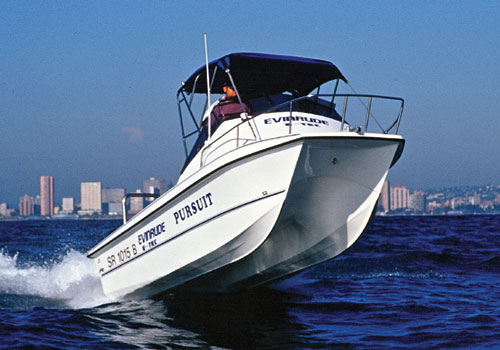 The Pursuit likes a fair amount of trim, even in a head sea, and I found once I had done that and the rev counters were at just over 3 600 rpm we covered water at a good speed. As there was no GPS, I would have to hazard a guess that our speed was between 17 and 20 knots.
With no major trim adjustment, the Pursuit 19 beautifully handled the reciprocal course with a reasonably big following sea, even allowing me to substantially increase speed.

In these sort of conditions I always prefer running with a forward beam sea, as it is normally more comfortable and allows for faster SOG, with the only disadvantage being the odd puff of wind-driven spray. Even in very big seas, especially when running for cover, I prefer to get wet while covering water than to bash into a head sea.

At slow troll speed with one motor I was able to hold direction, even with the substantial canopy that could have affected this type of operation. At faster speeds she was comfortable, even when riding with the wind and chop directly on her beam.

While drifting after a good few hours of hard riding, it was relaxing to sit back and enjoy the moment at sea while chatting to Tony. This craft sits well in the water and doesn’t give any impression of instability, even when both of us were leaning over the transom looking at some new features on the Evinrude E-Tec motors.

I also tried using only one motor with the other dragging and could get her onto the plane relatively easily. With the second motor trimmed up, her reaction was impressive. After my test, four big guys took her for a spin, and her performance on one motor — as well as the minimal fuel she used during the long run into the harbour and to the Point Yacht Club’s slipway — had them really impressed.

I really enjoyed driving the Pursuit 19 with the Evinrude 90 E-Tecs, and was also most impressed at the way this combination worked so well.

DECK LAYOUT
Restyling any craft is not only a big undertaking, but also a risky task. In effect, it is simply the likes and dislikes of a few individuals that determine what is required and where, and then it has to be undertaken in such a way as to make it look good.

The redesign of the Pursuit seems to have succeeded well in all these aspects — at least in my opinion.

During the revamp it was the top deck and interior of the craft that had the major face-lift. The complete profile styling has been changed to alter the racy appearance of the previous model to a cleaner, more conventional look, with a lot more protection. The foredeck has been made a lot flatter and therefore much more practical for the person delegated to work the anchor. 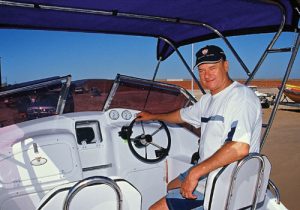 The forward console features, among other changes, a walkthrough section of the windscreen, as well as steps to make clambering over to the foredeck a lot simpler.

While still retaining her smooth lines, the gunnels are flatter and culminate in a full transom incorporating motorwells, a livebait tank and internal stowage for bottom oil pumps, etc.

A basic deck layout has been opted for. It features a central coffin hatch for fuel, plus reasonably-sized below-deck fish hatches with hatch tops that include postbox lids for sliding fish into them.

I particularly liked the helm station area. Binnacle mounted throttle levers are well positioned for use, but are out of the way of the skipper’s thighs when he swivels around on the seat while fishing. The positioning of the steering and gauges was very comfortable, height-wise, for me. There’s also a recessed sounder compartment in the walkthrough area, and whilst very protected, it was a little awkward to study if one wanted to look hard at a reef structure while bottomfishing.
The collapsible canopy structure constructed from stainless-steel tubing and covers was well positioned and would not interfere with the anglers while fishing. Apart from this, it seemed to have minimal effect on the ride of the craft, even at high speed.

FINISH
In most ski-boats external finishes have become an integral factor of product presentation. As one of the largest boat dealers in South Africa, Waterworld are very conscious of this factor and have gone the extra mile to ensure that not only does the Pursuit 19 look good and ride well, but is also very well finished.

Finishes require both thought and money to achieve, and in this area it doesn’t come cheap. The end result is very fine indeed, and over time those who own and use this craft will continually enjoy all the thoughtful little touches that have gone into the design and building of the Pursuit 19.

CONCLUSION
The Pursuit 19 is an all rounder’s craft. Whether you want to go light tackle gamefishing, bottomfishing or — with some deck reconfiguration — big game fishing, she will provide a stable and comfortable platform, and when the weather turns sour she will get you home safely.
Considering the way ski-boating is taking off in Moçambique, her size and trailerability make her an ideal-sized craft for use in those waters. With a touch of class, of course!