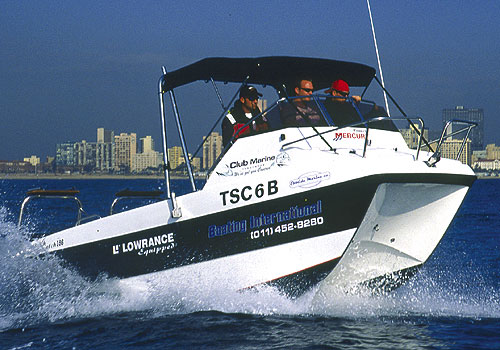 BOATING International’s MD, Dean Levy, was born into boating. With grandfather Arnie and father Derrick, it’s little wonder that Dean started up his own boating business in Johannesburg a number of years ago. Initially he specialised in waterskiing and luxury speed boats, but with fishing in his blood, it was inevitable that he would move into the ski-boating arena, and this is now paying dividends.

Not one to simply retail ski-boats, Dean opted to start his own range of stylised boats built in South Africa, and sell them alongside the imported craft he had on show. This resulted in the Quickcatch range — the 186 and 160 centre- and forward console models. These craft are custom-built and finished to Dean’s requirements, and are sold as a package — rigged and ready for the ocean.

GENERAL IMPRESSION
As the Quickcatch 186 was towed into the holding area of the Natal Deepsea Rod & Reel Club she made a big impact visually. Behind Boating International’s black 4×4, the Quickcatch 186’s black–and-white styling not only made this craft look bigger than she is, but also extremely impressive. Throughout the photo session I kept thinking that it was amazing how this colour combination made the craft look so good.

CONDITIONS FOR TEST
The Boating International team had towed the two Quickcatch boats for the test all the way from Gauteng, and then when we got to sea the early morning sun was blocked out by a big bank of westerly-driven clouds.

Fortunately, the westerly pushed the clouds out to sea and thereafter the sun shone brightly. The sea itself had a big southerly swell moving in from the Antarctic, and a moderate south-westerly was chopping up the surface. From a boat testing point of view, this was ideal.

The protected waters off Durban beachfront allowed for speed work, whereas the deeper I went the rougher the sea became, enabling me to put the Quickcatch 186 into some fairly rough stuff, in so doing allowing me to assess her capabilities in these sort of conditions as well.

LAUNCHING AND TRAILERING
Judging on the time taken to tow the craft from Gauteng to Durban behind a 2.8-litre turbo-diesel 4×4, there is little doubt that the rig did tow very well. I did not have any reason to tow the boat, but looking at the trailer and considering that I know its pedigree, I can only presume it will tow well both on the highways and also on the rougher roads of Moçambique.

Moving the Quickcatch 186 off the trailer and then back on at Rod & Reel’s slipway was effortless. As easy as launching off a slipway into Durban Bay was, I can only guess what it would be like to beach launch the Quickcatch 186 and reload her onto her trailer. Considering the breakneck trailer supplied, beach launching should not present a problem.

Indeed, the trailers used these days by most major ski-boat manufacturers have come such a long way in both design and manufacture that, especially in respect of slipway launching, it seems almost superfluous describing this aspect during a boat test. 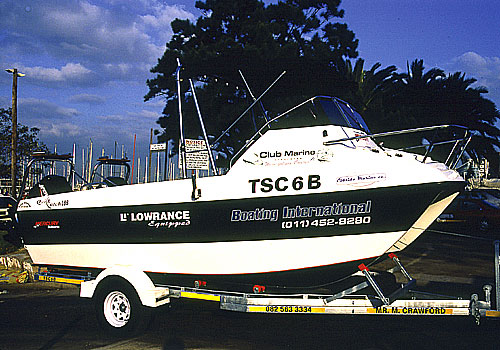 Having just fished a four day competition with the identical motors, it was interesting to compare the performance of these new Mercurys with the three-year-old motors I used during the competition.

Even after her tow from upcountry, once on the water, the first click of the ignition switch had both motors purring sweetly.

Surprisingly, even though the new motors had barely been run in, they produced exceptional torque during out-the-hole trials and showed power right through the range. I only opened her up once while at sea, as speed is not important to me, but this rig really went very fast. More importantly, and what certainly impressed me, was the instant power response through smooth throttle controls.

Interestingly, the smoothness of the controls was far better than those on the boat I used during the competition. The same went for the ease of starting at sea. There is no doubt that it’s vital to have the motors installed properly to extract maximum efficiency from them.

The hydraulic steering was equally smooth, though obtaining full lock when turning to starboard was restricted to a degree, whereas to port I could get full lock. 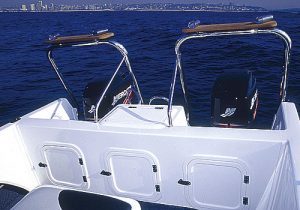 HANDLING
This is what boat testing is all about, for it’s the one thing a prospective buyer can’t determine from an inspection on a showroom floor, photographs or — for that matter — sales brochures or salesmen’s hype.

I believe this aspect to be so vital that the excitement of playing with a new boat at sea is tempered by the fact that what I discover during that period will be set in print for thousands of ski-boat readers to analyse and dissect.

The Quickcatch 186, however, made my work in this department easier. Firstly, I had experienced the basic hull’s performance some time before, and — secondly — she performed well in the majority of sea conditions we experience off our coast.

Putting the swell and the west wind behind me, my run up the coast at a speed of just over 20 knots was both comfortable and smooth. In fact, she was riding so well that we covered a lot of distance before I realised that I would have to take the sea head-on on a reciprocal course back to Durban.

Indeed, a moderate west wind on the transom more often than not makes skippers complacent. However, when faced with a strong westerly, an old Durban skipper’s trick is to take the head sea on the forward port beam and run the cross sea until one either reaches the generally calmer backline or, as I did in this instance, when I reached the protected waters off Durban’s beachfront. Thereafter, the small westerly chop can be ridden over at speed until you’re back at the harbour entrance, as I did.

I eventually put her into the head sea to start my run back to port, but only after I had spent a good deal of time putting her through a full range of trolling exercises.

As a moderately large ski-boat, the Quickcatch 186 needs to be able to handle the biggish seas we experience when big gamefishing, such as trolling lures for marlin and baits for sailfish. It is in seas like I experienced that day that these big predators like to feed, so one has to fish in them. Trolling at six to eight knots is the most demanding exercise a boat has to endure, because in this situation she needs to take the sea from all points of the compass. In addition, from a crew-comfort point of view, she needs to have a soft ride and not have wind-driven spray drizzling over everyone aboard, or indeed continually wetting everyone by scooping water over the bow. 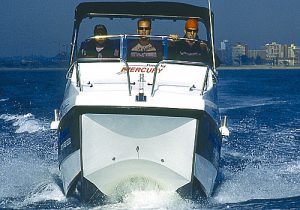 This craft weathered the storm well — I was impressed with her ride and stability. As for as my pet hate — getting wet — she was well within acceptable limits.

At slower troll speeds, right down to livebait or ’cuda trolling, she was great and the protection provided by the high console and windscreen surrounding the helm station made her very comfortable to fish from.

With her fold-back canvas canopy design, it would be possible to include clears if one felt it was necessary for certain rough water applications, thereby providing total protection for skipper and crew.

After these trials I had to head home. Taking the sea head-on, I adjusted her trim and eased the throttles forward until she was on the plane, making reasonably comfortable headway at about 16 knots. At faster speeds she was inclined to overshoot the wave crests and land rather hard on the back of the chop before facing the next. At 14 to 16 knots we could have got home, but as I enjoy a comfortable ride more than a challenge, I then turned her bow to starboard and rode the wave shoulder at a good 22-plus knots back to protected waters.

This she rode beautifully. With a little bit of up-trim on the port motor to hold her port sponson tight into the sea, I was able to maintain speed and only occasionally had to alter course to take on an out-of-character wave that popped up out of nowhere.

Once we were out of the big stuff I put her bow into the wind and chop and opened the throttles. After retrimming her both laterally and a little bow-down, we made it back to Vetch’s at 30-plus knots.

She also handled simulated surf work extremely well when I tried her in the big swell peaking over the Kinmount Bank. Both her ability to turn tightly and then come out of the hole at speed enabled her to pass that test with ease.

DECK LAYOUT
Dean has put a lot of thought into the simple and practical layout of this forward-consoled craft.

The helm station is well designed for the skipper, providing him with comfort, space and ease of accessibility to steering, controls and instrumentation. A reasonably high windscreen adds greatly to this comfort. The windscreen flips over, providing easy access to the anchor hatch.

Crew are also well provided for with grab- and hand rails which are useful not only for long runs out to the fishing grounds, but also while working the deck.

An uncomplicated fish deck features a sturdy and stylish double coffin hatch for housing fuel and other gear. The hatch has a comfortable upholstered top seat.

High gunnels and a substantial false transom add to the sense of security aboard the craft and are great to lean against while fighting a fish. A nice size livebait well has been provided in the centre of the transom area. This transom area also has cupboard access to the batteries and a central wet locker.

Each sponson houses a large underdeck fish hatch that has a double hatch cover. This is great because you can comfortably stand on one hatch while loading smaller fish through the other side. A big fish? No problem — just open both lids to get it in. 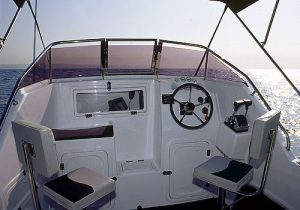 FINISH
The redesign and remodelling of the Quickcatch 186 has really changed the face of this craft when compared to the original models built about a year ago. Not only is it more comfortable and practical than before, but the quality of finish has also improved considerably.

The finish on a craft is important both for the buyer’s initial impression and, more importantly, for ease of maintenance over the years. During my stem-to-stern inspection of every nook and cranny of the Quickcatch 186, the vast improvement that has been made in this department was quite patent.

CONCLUSION
Dean Levy and his team at Boating International take a lot of pride in their range of offshore fishing craft. The Quickcatch 186 clearly reflects that pride. I am sure this craft will find a place in the offshore fishing market, particularly as a craft for anglers who want to tow their boats to the many fishing destinations throughout South Africa and in Moçambique.