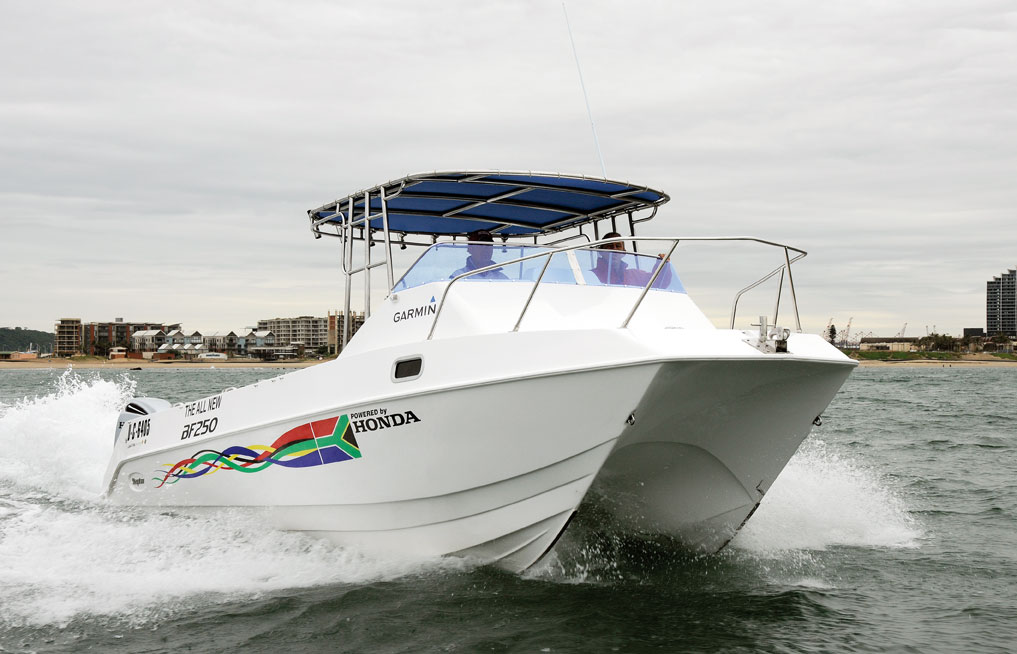 IN the Charara Basin of Lake Kariba you’ll find Nzou Lodge where the Captain Morgan Team fishing in the Zimbabwe International Tiger Tournament had based themselves. At its small marina where our boat was moored I noticed a big “new” craft I had not seen before. Curiosity led me to take a closer look, and I wasn’t surprised to see Paul Sims, an experienced boat builder from Harare, near the craft.

“This is the new Reef Runner,” he proudly told me.
From the overall design I could see she was not designed and built specifically for Lake Kariba, but rather for offshore gamefishing. In 2008 a lot of Zimbos were starting to fish the Moçambican coast off Vilanculos and Inhasorro, as these were the closest fish-rich grounds when towing from Harare.

To cut through the history quickly, the Reef Runner was an instant success, so much so that her hull design formed the basis of the NovaCat 270 that appeared in South Africa during the early 2000s.

In 2005 Paul’s company, Offshore Boats, in Harare was sold to the present owner, Hayden Barber, trading under the name of H20 Mechanix. Hayden has since revamped both the hull and top deck to produce a practical and very special forward console version of his original centre console craft. Most recently he has been working with one of Zimbabwe’s most experienced anglers and a good friend of mine, Roger McDonald, in formatting a craft for his personal use off Inhasorro. 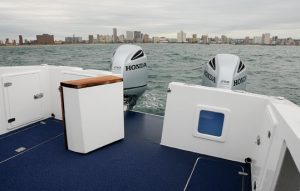 Honda South Africa has negotiated the exclusive marketing rights of this craft for South Africa and subsequently unveiled the Raptor 820 to Honda dealers and press at a convention held in Port Alfred in April 2012. Powered by twin Honda 250hp 4-stroke motors that were also being released for the first time in South Africa, it made an impressive entry into our market.
I was privileged to have Hayden bring this craft to Durban on her way back to Harare so that I could review her. Whilst I scrutinised her with interest at Port Alfred, I wanted to ride her myself without the accompaniment of the band of thrill-seekers one always finds at launches such as this. I did, however, carefully watch her taking on the treacherous entrance where the Kowie River meets the sea between its two breakwaters, and used what I’d seen there when playing with her off Durban.

When she arrived in Durban the window of opportunity to review her was only one day. Regardless of the weather the Raptor 820 had to go to sea. A howling southwesterly gusting in excess of 20 knots was ideal as it provided me with flat water off Durban’s beachfront, getting worse as we proceeded out to sea where it was raging with a big swell, deep troughs and white water all over the place.

Exiting Durban harbour I initially had to run side-on to the strong wind chop and it was this ride that reinforced the pedigree of this hull. I have spent many days riding the big Novas, not to mention years on Brad Kidd’s B’s Nest, so it was not surprising that I felt right at home. In fact, it was rather a strange turn of events that I’d been aboard the “offspring” before the “parent”. Not surprisingly, the late Bou Raath also felt that the Reef Runner hull was ideal for his Moçambique operation at Marlin Lodge. Fishing that area necessitates long runs over flat but choppy water into often heavy seas, and clearly the Reef Runner hull could handle that with ease.

Once across the bar off Durban, I headed hard to starboard and into the ugly sea where outflowing tidal waves mixed with the swell and wind that were pushing in around the end of the Bluff. From running down the channel at 18 knots, the turn was a case of baptism by fire. I was forced to reduce speed substantially as I came about and headed directly into the head sea and teeth of the wind. With an SOG of 8-10 knots we made progress, with the Raptor taking everything King Neptune could throw at her. 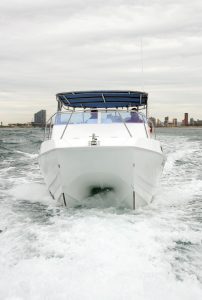 I remembered how trim was an important tool in adjusting this craft’s ride under varying sea conditions, so commenced with her motors trimmed right in to force her low into the oncoming crests, then gradually trimmed up the Honda 250s until I found her sweet spot. With her bow-up stance too high she began buckling as the strong wind added to the lift both under the hull and her T-top which was acting as an aerofoil.

Travelling a few kilometres southward enabled me to really feel her performance during a sustained run at optimum trim, and it also allowed me to run a reciprocal course with a stern sea and strong tailwinds.

During the head sea run I reached a speed that was as comfortable as one could get on a craft of this size in a horrible sea. A big plus was that she was surprisingly dry.

A long run with the sea in this state always worries a skipper. With the huge swell cresting behind the boat, the knowledge that it is on an unstoppable rampage leaves a skipper two choices. Either you can top off the throttles and weather the wave overtaking your craft, risking the possibility of a yaw creating push from astern, or you can run the swell at full speed until it rolls out in front of you. In the latter case a lot of bow-up trim is vital and crew weight must be placed well aft.

Surfing waves such as this is not recommended unless one not only has surplus power, but also knows how the hull performs and knows of any tendency the craft has to drop a sponson or yaw when in the critical position of reaching the trough between waves.

In the long run back towards the Umgeni area I put the Raptor 820 through all possible situations in a following sea. It was hair-raising at times, but it’s a lot of fun playing with someone else’s boat, and with the deep seated knowledge of what the hull could do, I as the skipper thoroughly enjoyed the ride. I’m not sure my crew enjoyed it as much, though.

During this exercise the Raptor 820 used her trimmed-up stance and her stern being pushed deep into the water to ride this sea with aplomb. As we reached the bottom of many troughs, I still had a lot of reserve power in the twin 250hp Hondas to push her a tad faster to prevent any ploughing that might have occurred during the critical few seconds that are, as I said, a skipper’s nightmare.

After a sustained run over about six kilometres, and while I was still out in the rough stuff, I slowed to a troll speed of about 8 knots and did some large figures-of-eight to see how she would perform at kona speed for marlin and also how wet and uncomfortable the ride would be. The conditions were extreme, and had I been fishing it would have been home time. However, the Raptor 820’s performance was really good and only into a quartering sea did we feel the wind-driven spray. A set of clears would have made a world of difference.
I re-enacted these trials, as well as slow-trolling trials, when we reached an area out of the full force of the wind and swell. Under these conditions I judged not only the boat’s trolling capability, but also the wake configuration she produced at troll speeds between 3.5 and 9 knots. That covers everything from Rapala speed to marlin kona speed. As expected, her performance was no different to those of her successors — as good as one can get, apart from shaft-drive motors.

During the run back to port with just wind chop over a long swell, I was able to really open up the Raptors 820’s motors and experience the full force of these mighty machines. With over eight metres of hull length, lots of wind in her tunnel and 500 horses behind her, she literally flew. I took her up to 30 knots and then trimmed her to perfection, allowing for a velvet-smooth ride home towards Vetch’s. She could have gone faster, but for me the speed and the ride were perfect.

There was one more exercise I had to do with the Raptor 820 and that was to see how she would bring her nearly 27ft of craft into and out of tight turns, as would be required in a surf launch situation. Big swell lift was being forced over Limestone Reef and I was able to play with her in these simulated conditions. 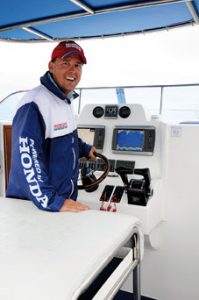 There was one problem I found — some stiffness in the hydraulic steering system which Hayden was aware of, but he couldn’t rectify until the craft was back in the workshop in Harare. I was able to get a full lock in both directions and was more than able to put her through complete trials, but it was heavy work. The Raptor, however, reacted very satisfactorily and her out-the-hole performance after coming out of an extremely tight turn was impressive.

As I mentioned earlier, there is also a centre console version of the craft which we used as the accompanying photo boat, so I was able to experience the ride of both these craft under the same conditions. Was there a difference? Sure, there had to be, but it was minimal and both models suit various needs.

The forward console model under review has been redesigned for serious, long-range offshore fishing and has been laid out with this in mind. I know Roger McDonald’s propensity for hard work while fishing, covering the full ambit from dropshot to marlin fishing, and this is evident in the craft’s layout.
At this stage a fighting chair hasn’t been fitted, but it can be if required. Roger prefers standup fishing, so on the fishing deck he has had fitted a midship tackle/bait station that includes a washup basin under the foldup work top. 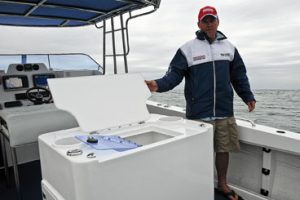 In the transom area on the portside of the substantial access door is a good size livebait well with with a window so that you can monitor your bait, and there’s a substantial stowage cupboard on the starboard side.
The forward helm station is fashioned in such a way that the skippering position is midships. There is an access cupboard door to the forward section ahead of the console, providing a large stowage area for all those necessary odds and ends.

I found this central forward skippering position comfortable, and whilst not totally novel, it’s different to most craft of this style and size. It also makes for a situation whereby crew can be deployed upfront on either side of the skipper, and then be available to quickly move aft in the event of a strike or hookup.

A sturdy, well-constructed T-top has been fitted. As I said to Hayden, the fitting of clears to the Raptor 820 would be simple and would provide that extra degree of comfort and protection from the weather. Yes, I am getting old, but from this comes wisdom. Indeed, I would not dispense with the clears I have had fitted to my Mr SKI-BOAT under any circumstances.

A lot of thought has gone into the Raptor 820, and by using his wealth of experience in boat building and assimilated ideas as to what a serious angler requires, Hayden has produced a superb craft. The finishes and hardware are excellent, and the entire hull and top deck are well moulded, thus producing a craft that feels great and performs well at sea.

With both models of this craft now being made available in South Africa, it will increase the options available to prospective buyers of craft this size. I look forward to seeing the Raptor 820 fishing the waters off South Africa, from Cape Town to Sodwana Bay.