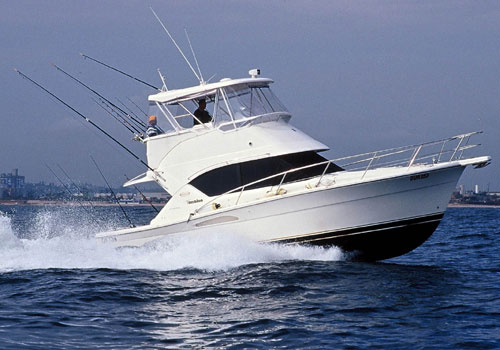 Two Riviera sportfishers made their way along Durban Harbour’s main channel towards the harbour entrance — the Riviera 40 (reviewed in SKI-BOAT November/December 2003) and the new Riviera 3350 right behind her. Indeed, it was an impressive sight as they picked up the early morning sun during their stately 8-knot procession towards the Indian Ocean.

I was on the Riviera 40, once again relishing her splendour, enjoying the morning and awaiting with anticipation the upcoming trial of the craft that was riding in our wake. But first she had to perform in front of the cameras. I say “cameras”, because joining me for the photo shoot was FOTOMAN’s James Dekker, well known for his magnificent boating pictures at numerous ski-boat competitions on the KwaZulu-Natal and Moçambique coasts.

The beastly easterly had blown for days, and whilst on this particular morning the north-easterly was relatively light, the sea itself carried the remnants of the choppy easterly over a fairly big swell.

As Allan Roper, the owner of Imbizo, opened up the throttles to track parallel to us, we picked up speed and headed on a course northwards, towards Umhlanga Lighthouse, with the swell rolling on our starboard bow.

Imbizo cleared the sea as she forced her shoulders free of the water, coming onto the plane to race alongside her big sister.

Although I’ve said this before, I will say it again: indeed, every time a good looking sportfisher really starts to move over water, it triggers an emotional impulse within me to catch my breath. The Riviera 3350 was no different, and through the lens of my camera I kept her in focus as she rode the seas.

An attempt to make the crossing from one boat to the other out at sea proved too dangerous and required both boats to head back into the calm waters within the confines of the harbour. After boarding Imbizo it was my turn to sit in the captain’s chair and experience the pleasure of taking command of this very fine sportfisher.

As I slipped her into gear and edged the throttles forward to commence our run out to sea, I experienced her ratchet-style throttle levers for the first time. I really enjoyed them, and the more I got used to them during the review, the more I liked them.

As we bypassed the end of the piers, I gradually opened up the throttles and felt the craft climb onto the plane and settle at a comfortable 17 knots as we headed north.

The Riviera 3350 is powered by twin 330hp Cummings turbo-charged intercooled engines that supply her with a great deal of power. Not only is she very fast — her top speed is 33 knots — but at her cruising speed of about 18 knots the motors purr effortlessly and hold that power in a moderate sea, regardless of the bearing taken.

I found that in the more than moderate sea conditions in which I reviewed her, whether I was running with the sea or had the sea on her beam — either bow or stern — she held course and speed. Heading directly into this sea I needed to reduce power. There were just too many holes and lumps to expect any craft to take it on at that sort of speed without damaging something.

For a review of this size of craft the conditions were excellent because, as choppy as it was, it was perfectly fishable for most types of fishing.
I started with what I possibly know best — trolling at “sailfish skipbait speed”, a speed over water of about five knots. She not only tracked well and was comfortable, even in a beam sea, but produced a flat, very tight white-water wake. As I increased speed I showed Allan how the white water broadens for every knot the speed is increased.
At seven to eight knots, which I felt was a good speed for big konas, even the short rigger lures would have run in clear water — even in the choppy sea that was running. At ten knots we were “whited out” for lures trolled at conventional distances.

On the converse side, at very low troll speed (the slowest I could achieve was about 2½–3 knot speed over ground) her tracking was fine, but she tended to roll quite a bit in a side sea. I wasn’t willing to ascertain whether she could have run on one motor to reduce trolling speed further. With these type of motors it is normally not advisable to run on only one engine as the forward motion can wind up the gearbox on the off motor.

Like most sportfishers this size, if left to drift with the bow or stern into the sea and wind, she is quite stable, but when she drifts side-on, the rolling motion is accentuated by the inertia build-up (pendulum effect) from the substantial flybridge.

The last of the sea trials I performed was to test her mobility during backing-up exercises. For those who have witnessed an experienced marlin captain really backing up on a big fish, it’s daunting and not for the faint-hearted. Water rolls over the transom and the engines scream, gearboxes clatter and the craft shudders. As I didn’t want to be thrown overboard by Allan, I was much gentler than I could have been.
This craft responded extremely well, pulling round to port and starboard with alacrity. Backing straight into the sea I was a little more careful, as water started to build up quite quickly, even when I raised her hydraulic trim-tabs right up. 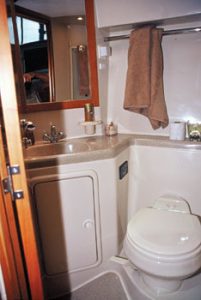 The new ratchet style throttle levers, I felt, were a boon under these circumstances, as the positive “clicking” told me how far I was moving the throttles. In addition, the automatic pausing when moving from neutral into forward or reverse prevents one from slamming the gearbox from forward into reverse, as one is inclined to do in the heat of the moment when following a big fish that is near the transom.

Throughout the above exercise, my only negative comment would be about the sun awning aft of the flybridge which obscured the transom and the angler from the skippering position. The Riviera 40 had a clear panel in this aft awning, and I feel that the 3350 needs to follow suit.
While one assumes you will get opulence in both design and finish in a sportfisher such as the Riviera 3350, the attention to detail from stem to stern on this craft was of an extremely high standard and within keeping for what she was designed to do — go fishing.

I write reviews of craft with the fishing scenario in mind, and in that vein the fishing cockpit or deck is of great importance. Whilst it’s not the largest fishing deck I have come across in craft her size, the way it is laid out optimises the space available. 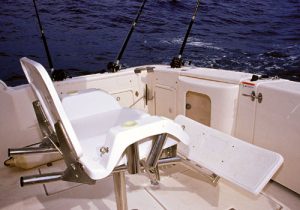 A Relax fighting chair takes pride of place and is well positioned for fighting big fish. In addition, however, there is space to move, tackle-up and fight fish, even when gamefishing with a large number of rods.
A livebait well is situated in the transom on the port side of the marlin gate which exits onto a substantial, wide swim platform.

Against the aft cabin facing is a freezer with utectic plates to ensure lengthy freezing ability. This also encompasses a bait station and wash-up facility. The entire wash-up cabinet then swings open to access the engine room.

While it was a fairly tight squeeze getting into the engine room, I found that the necessary checks and filter changes could be done. For a smaller, younger guy it would be much easier. In the end I just marvelled at the design and how they could provide so much engine space in a 36ft craft.

The flybridge is spacious, allowing the skipper plenty of room to operate his craft, even if another person is sitting in the chair alongside. His access to and view of all instrumentation and controls is easy, even when reversing or mooring the craft.

For safety a fold-down hatch-cover blocks entry up onto the flybridge while working the outrigger and teaser reels, and provides extra space on the flybridge.

The surrounding clears and hardtop are extremely well constructed and finished, which is essential for the captain as this craft has no helm station in the saloon and the captain has to stay up top, regardless of weather. 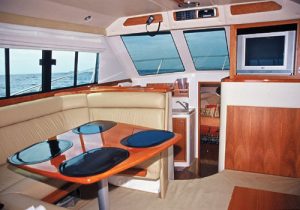 But because there is no helm station in the saloon, it not only gives one extra space there, but also allows for an extremely attractive interior design which includes top-of-the-range leather-upholstered seating and beautiful solid woodwork. When the blinds are down and lights dimmed, this gives one a cosy club-style environment.

Stepping down to the galley, heads and cabin areas is practical, even in a rough sea, and again the design and execution of the facilities and accommodation is tasteful and very user-friendly.

The galley, with its full array of appliances, should cater for all culinary requirements on board and is easily accessed from either the deck or saloon. 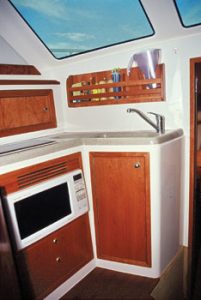 Allan has chosen an African theme for the decor of the master stateroom which is comfortably spacious. Adjoining this is the en-suite bathroom with vac-toilet, a shower stall and vanity, and, above all, room in which to move when the door is closed.

In an overview of this striking craft, I commend its sea handling capabilities and believe that as a fishing machine for our South African waters it is top rate.

As for its long list of niceties, the only way to appreciate the Riviera 3350 is to actually board her and see for yourself what she has to offer.