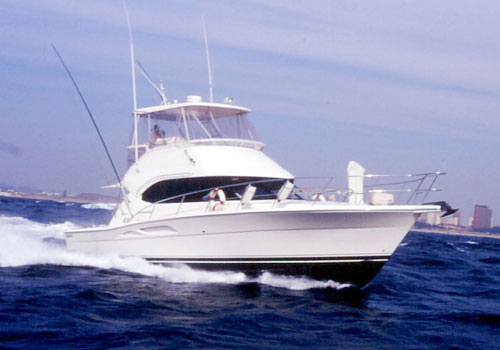 The Riviera 40 raised her shoulders and dug in her stern as she powered into the first of the big waves making their way between the Durban harbour entrance piers and creating the notorious bar. She tossed water far and wide while making headway at 6,5 knots into what seemed a never ending series of big, undercut waves.

A strong north-easterly that had blown most of the night — reaching 30 knots at times — had pushed up a mountainous sea that was forcing its way up the harbour entrance channel against an outgoing spring tide.
It was not a nice sea, and even Durban Port Control queried our decision to venture out into it.

Derrick Levy of Boating World, the agents for the Riviera range of sportfishers built in Australia, is justifiably proud of the Riviera 40 Flybridge Convertible he brought into South Africa some time ago. On two previous occasions he had permitted me to satisfy my curiosity and board this craft on moorings. I have to admit, the desire to take her to sea was close approaching an obsession.

The day finally arrived, but so did the bad weather. It was a disappointment, as one tends to associate a magnificent craft such as the Riviera 40 with cobalt blue seas while trolling for big marlin, but we were faced with the antithesis — a sea full of white-crested peaks and associated troughs. This would certainly be a test of note and not a mere meander around the ocean.

In instances such as this, taking command of a craft of this magnitude and value in these conditions is, to say the least, daunting, but it’s also very exciting.
Exciting it was indeed as I settled into a comfortable seat behind the controls on the flybridge of the craft, taking in the full array of gauges, instruments, toggles and buttons, all necessary to maximise performance in the sea I was about to face. Electronic gear/throttle controls, auto-pilot, trim-tabs, a bow thruster as well as GPS and sonar — an arsenal of equipment was at hand to make my command of the Riviera more comfortable. 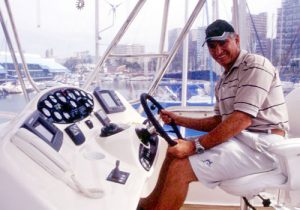 The Riviera 40 Flybridge Convertible has a pedigree of great standing that emanates from the offshore boating scenario on the Australian east coast. Riviera Marine, whose factory is based in Coomera near Brisbane on the Queensland Gold Coast, has established its sportfishers as a leading range of offshore fishing craft through sheer performance, supreme quality and outstanding service. Boating World’s Derrick Levy has capitalised on this, and after seeing the first Riviera that came into the country in 2000 (see review on the Riviera 43, Absolutely, May/June 2001 SKI-BOAT), he negotiated with Riviera Marine for the rights to market their craft in South Africa.

Absolutely is presently fishing out of Marlin Lodge in Moçambique, the Riviera 40 is Durban-based, and three Rivieras, a 45 and two 33s, have been ordered and are due to arrive in South Africa during the next few months. This presence will greatly enhance a movement that is currently underway in South Africa amongst some boat owners to upgrade to this style of craft.

During the photographic shoot earlier in the day I had watched from the accompanying boat as the Riviera attacked this rather big sea. Our original plan was for me to cross over at sea for the onboard trials, but this was extremely naive, considering the conditions. The result was a return into Durban harbour for the transfer and then an action replay of the assault on notorious Durban bar.

I say that it was daunting commanding the Riviera in these conditions because, regardless of the size and stature of the Riviera 40, it does not flatten a big sea, especially conditions that have a violent wind butting heads with a racing tide confined between two breakwaters.

The Riviera 40 once again made her way through the washing machine with aplomb. Then, once we reached the open sea, I was more than happy to turn her bow a few degrees to port, move the throttles forward and feel her gain momentum as she rose to run the incoming swell and wind chop on her starboard forward beam.

This mighty craft tossed spray high and wide as her speed increased on a course parallel to the Durban beachfront. We were averaging over ten knots, holding course up the coast, and could have maintained this in comfort if the need arose.

After some distance I swung her bow directly into the “beastly easterly” after throttling back. She behaved well and could have taken more speed if there was a need, but I cannot bear to feel nearly 14 tons of magnificent craft being lifted high into the air and falling many metres into the following trough with the resultant shuddering pound. I am sure she could take it in an emergency, but I could not put her through that just for the sake of it.

After turning her to the south I could again increase throttle and had her running on the plane with the sea and wind on her port aft beam. She loved it as we made our way further out to sea at around 16/18 knots.

With her bow trimmed up she had no problem running with this steep, following sea. Her stern seems to settle in the following wave as she runs down the face of it, and even up on the flybridge I never got the feeling that she was going to race ahead of herself and get into a position where she could start to yaw.

In spite of the sea, I needed to set her at kona troll speeds (5,5 to 7,5 knots) to see how she reacted to the large figure-of-eight course I set, thereby ensuring that I subjected her totally to the effects of the prevailing sea and wind. Whilst no one in his right mind would troll for marlin in that sea, it was interesting to see how this big craft settled down to the job. Indeed, her lateral stability got me believing that I could actually pull a full set of lures effectively, even in those conditions.

To carry on testing her marlin fishing capabilities, I exposed her to limited backing-up trials. However, the sea was just too rough and I was not totally used to her controls to risk a mishap, so I re-enacted this exercise in the quieter waters of Durban harbour. Getting used to backing-up with the electronic gear/throttle lever takes time, and the lack of a rudder indication didn’t help. However, once I got the combination right she reacted superbly, as I had presumed she would.
Overall it was a rough test, but the Riviera 40 came through with flying colours.

One big advantage that 40ft sportfishers and other bigger craft have over smaller craft is flybridge space. A big flybridge with ample comfortable seating and other facilities turns a fishing machine into a cruising craft, as it allows a fair number of those aboard to join the captain in his lofty bridge to also enjoy one of the best places to be on a sportfisher. In this respect the Riviera 40 also scores highly with her large flybridge area. 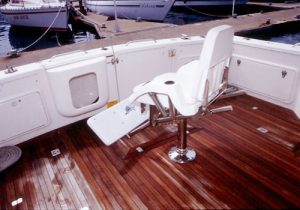 In reviewing a craft of this opulence, adjectives to describe aspects of her styling, design, finish and facilities become inadequate. In fact, I’m almost at a loss for words to describe the finishings. In this craft Riviera have excelled to the extent that neither photographs nor words could properly convey the total picture. There is only one way to get a true impression of her — board her and truly experience for yourself her looks, her feel and her finishes.

Something that struck me when I reviewed the Riviera 43 and again when I boarded the Riviera 40 is the solidness of the finishes. Not only are they perfect in design and concept — be it glass fibre or wood — but they are rugged too. Yes, the cabinet work is outstanding, but it’s more than veneer deep — everything is substantial and built to last.

Then comes the practicality of the entire deck, flybridge and saloon/cabin area. One can immediately see that offshore fishing experience has played a major role in dictating what should be provided, where it should be placed and how it is designed. Add to this the flair that has gone into the interior design and its practicality out on the ocean, and there’s no doubt that someone with an artistic flair and a good deal of boating and fishing knowledge was involved in the design of the Riviera 40.

The fishing deck — with a Reflex fighting chair mounted centrally, work station and rod stowage hatches, as well as livebait and fish hatches — is “to die for”. Not only is it as spacious as one would expect on a craft this size, but it’s also comfortable both for fishing and cruising.

Access to the engine room had me puzzled until co-owner Trevor Smith pulled a lever, swung aside the bait station and there, nestled in the hull, were the twin 230hp Volvo TAMD 74L turbo-charged diesel engines. I was able to get into the compartment and undertake all the tasks associated with running big diesels in a sportsfisher with ease. When I was back on the deck and the access closed, the generator was started and shore power removed. The generator was barely audible and is, of course, vital to provide electricity to the vast array of electrics fitted to this craft. 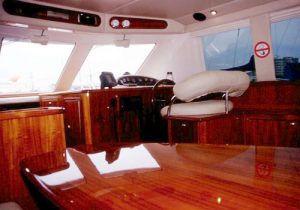 The internal layout of all sportfishing-cum-cruising craft is determined by one thing alone — money. With money comes design and finishes determined by the owner to suit his personal needs and desires. The Riviera 40 panders to the upper level of those able to afford the luxuries of such a craft, for it is without doubt fitted out for the most fastidious.
Within the saloon of the craft reviewed is a full helm station, a setup that has always appealed to me. The reason is simple: on a long run home from the fishing grounds, it’s much more comfortable to be with your mates who are inevitably relaxing and reviewing the day’s events, than sitting up on the flybridge with little or no company.

However, the helm in the saloon tends to cramp the space available, and the trend nowadays is to have a more open-plan interior for cruising and entertaining, thus relegating the captain to the flybridge.

With this in mind, flybridge design has therefore been improved, utilising hard tops and clears (weatherproof screens) to protect the captain and crew from the elements. This makes the single station much more practical. 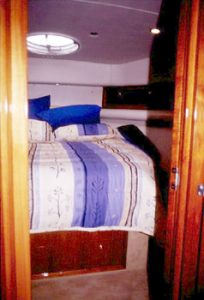 The cabin configuration and ablution setup on the Riviera 40 ensures that the master suite has private access to the bathroom, and that the bathroom itself is of a size to make it user-friendly. The guest cabin is also very spacious and comfortable.

As I said earlier, a visit to the Riviera 40 Flybridge Convertible will enable you to see all that this magnificent craft is about. In this review I have endeavoured to give my views mostly on her performance, a facet of this craft which is naturally not as easy to guage when viewing her on moorings.

A craft of this calibre is a welcome addition to the blossoming sportfishing fleet in South African waters. Not only does her presence add lustre, but it also affords avid offshore boaters and fishermen the opportunity to see craft of her pedigree “in the flesh”, not merely relying on glossy pictures in brochures and magazines. When you see the Riviera 40 I’m sure you’ll agree that she is picture-perfect!