HER long, sleek, imposing bow sliced through the relatively big northeasterly sea as the 41 Riviera set a course out to the current off Richards Bay at her cruising speed of 20 knots. To say she presented an awesome sight is somewhat of an understatement. As Richards Bay’s Jannie Nell tried to run parallel to her on his 20ft ski-boat, we were just overwhelmed by her presence.

The Riviera 41 was possibly the most sportfisher-like looking craft I had observed for sometime, and there she was, planing right before my eyes. Extremely stylish, she still managed to show off her assets magnificently under the somewhat tortuous sea conditions which were prevailing at the time.

It was only later when I was able to board her and take the helm that I could add the very important aspect of “feel” to complete my assessment of her pedigree. She has style, she has size, she has fishability and, above all, she encompasses all these features in a solid, beautiful-looking craft.

When we reached the current, the peaking chop of the shallow inshore water subsided somewhat as the strong north-to-south currents tend to do in that region. This enabled Trevor Harvey of Nell’s Marine — who skippers this craft for her owner, Costa Georgiou — to put the Riviera 41 through her paces in front of the cameras, showing her off splendidly.
While the photographs adequately portray her looks and show the way she rides the ocean, it’s just not the same as actually being out there and watching Jean-Anne, as the craft has been named, thundering past us at close quarters.

However, the best sight of all is still to see a big sportfisher looming up behind one as both craft cruise out at sea at about 15 knots. To witness this huge bow approaching, with white water spraying off each side, the water line of her hull slicing the ocean’s surface a mere 10-15 metres behind us, was more than enough to send a tingle down my spine and indelibly print this picture in my mind.

Costa Georgiou has his Riviera 41 permanently moored on a jetty right in front of his waterfront condo in the Tuzi Gazi complex in Richards Bay. This has to be the ultimate way to go boating or, for that matter, to live!

When my fun with the camera was over, it was with a degree of trepidation that I climbed aboard Jean-Anne, mounted the stairs to her spacious flybridge and took over the controls from Trevor. Taking control of a craft one has never before even seen is daunting, but it is also extremely exciting. After a few questions from me and some guidance from Trevor, the Riviera 41 was mine to play with for a few hours. We were also joined by Zane Dresner, sales manager from Boating International, the company importing Riviera into South Africa, who came along for the ride. 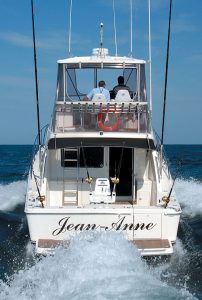 My first assignment was to understand the mini control panel on the binnacle-mounted throttle levers (right). Troll I, Troll II, Cruise I, Cruise II it showed. Trevor was quick to explain that these electronic controls initiate the trolling valves within the hydraulic gearboxes attached to the formidable twin 500hp supercharged Cummins motors powering this craft.

By turning the control knob, one can change from cruising — that is normal operating conditions — to Troll I which drops the props’ revs when the throttle levers have just engaged the gearboxes, to reduce the minimum speed from 5 knots SOG to just over 3 knots. A further twist to Troll II again reduces the propellers’ revolutions to further drop the speed to about 1H knots.

This exercise is so simple, especially when compared to the pull-out lever of the old-style trolling valves, and is a huge improvement for operating a craft under our conditions. Up to now, no facility was provided to reduce trolling speed under 4H or 5 knots.

I spent a lot of time slow trolling with the Riviera 41, and she would be very practical for livebait fishing, even for trolling small livebait for ’cuda. The slightly faster setting would suit anglers trolling livebaits for marlin. Although some might view this facility as a minor addition, it is a definite practical advantage when fishing the way we do in South African conditions.

While operating this craft through the full range of trolling possibilities, I was able to monitor the wake she threw from 1H to 9H knots, which proved to be very interesting. Throughout this range I was able to study her wake with gradual increases in speed. I correlated these to the various styles of fishing, from livebaits to skipbaits to bibbed lures, softies with strips for sail and, ultimately, big konas for marlin. Yes, she truly is a top-rate fishing machine in this respect.

Having mastered trolling, I settled back into cruise mode and set a course for the traditional marlin fishing grounds deep off Dawsons. With the swell and chop marginally on the starboard bow and speed increasing up the range, I was able to sit back and relax in the very comfortable captain’s seat and appreciate her ride as we reached a cruise speed of 18 knots.

Riding at this sort of speed eats up the distance, but can also result in a harsh ride if the craft is not trimmed to perfection. The holes and short crests in the northeasterly seas are renowned for the toll they take, especially on smaller crafts’ performance.

The Riviera 41 is no exception. She is sensitive to trim, and if she is incorrectly trimmed laterally or bow-up/down, you could induce an uncomfortable ride. However, with her trim fine-tuned she was an absolute pleasure to be aboard. Even when we eventually ran for port at 25/27 knots from out deep with a direct beam sea, she stabilised her stern in the water and seemed virtually unmoved by the rough water we were travelling over.

Whilst various trim settings were tried, I found she preferred a slight bow-up stance for most of the high speed cruising, with even more bow-up trim when running in front of the swell and chop.

On the drift and during trials at slow troll speeds of 1H knots, I found that she settles well in the water and is surprisingly stable for a craft of this size. This is especially relevant since she carries a large flybridge which, in turn, lures most of those aboard to migrate upstairs, thus further elevating her centre of gravity. As troll speeds increased she became even more stable, even when trolling broadside to the sea and wind.

I’ve said earlier that this is a fishing machine of note, and I must reiterate that from the captain’s seat and positioning of the helm station, it is obvious that the people who designed the Riviera 41 have had vast big game fishing experience. This aspect of the Riviera 41 is superb. Not only is the view of the deck fantastic, even though on this craft it is partially obscured by an aft deck awning, but so is the view of the lures trolling behind the craft.

Her manoeuvrability during backing-up trials was fast and effective, sliding her stern easily left or right as would be required to keep a big fish in the correct position for the crew to work. A straight back-up, even with the hydraulic trims in their full up position, had to be controlled fairly carefully, as I found she tended to dig in her boarding (marlin) platform if excessive power was applied.

I did not use the bow and stern thrusters during these trials, primarily because of my inability to multi-task. I had enough to keep me occupied while playing with the throttle/gear levers, and did not need to complicate things by playing with two thruster controls as well. However, when I saw how easily Trevor manoeuvred her up to her mooring using the two thrusters, and with a very strong wind blowing, I have little doubt that under the control of an experienced captain the thrusters would produce more manoeuvrability when swinging the craft’s stern than I was able to do the old fashioned way.

As I have called her a magnificent fishing machine, I will start my overview of this craft with her cockpit/fishdeck. Although not the biggest fishdeck I have come across on craft of this size, it is clinically clean in design, with everything a switched-on marlin deckie could wish for. Everything is well positioned, and even in the midst of fighting a big marlin, it would be practical for both the angler in the chair as well as the deck crew who need space around the side and transom area when the fish gets near the boat.

With a good height to the gunnel top, a teak deck, livebait well, substantial fighting chair, a freezer and bait station as well as more than enough hatches, including fish hatches, there is little more that any angler or deck-hand could wish for.

To finish off the fishability aspect of this craft, the large, spacious flybridge must rate as world-class. Not only is it large and designed to comfortably accommodate four big men upstairs, but it also has a lot of storage, a plumbed basin, a fridge and very comfortable lounging seats, all within the confines of clears that will protect everyone from the elements. 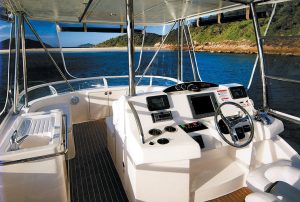 As this craft follows the American concept of only having one helm station — the one on the flybridge — Riviera have ensured that the station is well appointed and has its full complement of instrumentation. It is banked in such a manner that all instrumentation is easy to see and use. It was only the VHF radio that I found awkward to use, especially when trying to view the station settings.

Access to the flybridge is nicely positioned and very practical, including when you need to shimmy down to the fishdeck when the reels scream.
Going through the glass door into the main saloon area, gallery, cabins and bathrooms is a great experience. Not only is it very pleasing aesthetically, but it also provides one with the feeling of luxury, spaciousness and comfort, together with an openness afforded by the vast areas of glass windows. Add to this the comfort of a good air-conditioning system and it’s not difficult to imagine how those aboard could ride back to the dock or, in Costa’s case, to his waterfront door.
In the many reviews I have done on Riviera craft over the last 15 years, I have always complimented the quality of the construction of their internal fixtures, fittings and finishes. I was thrilled to see that in this age of “quick-fixes” and pretty finishes, their high standards have not been sacrificed. Throughout the superb main cabin, second cabin, bathroom and extra toilet, practical and smart finishes are the order of the day. 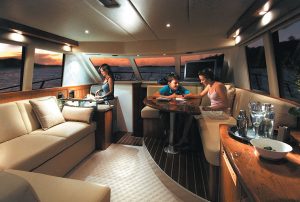 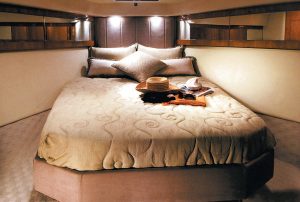 I suppose my emphasis of making sure that a boat is practical to use at sea has come from being aboard some boats that look great when they are on moorings or during a booze cruise on flat water, but when the sea is really bad and one tries to enter the saloon, for example, it suddenly becomes a serious and often hazardous task to accomplish.
The Riviera 41 has an overall length of 46ft, and is a sportfisher that is well above the average craft in this country. As a large craft, one certainly does expect more of her, and this craft delivers. As Trevor said, Costa’s previous craft was a Riviera 37, and now, having skippered and fished the Riviera 41 for some months, he is totally convinced that size does count. I can definitely concur with this statement, even considering my limited time aboard Jean-Anne.

I rate the Riviera 41 as a dream craft, not only because she is certainly a boat I could fantasize about owning and using, but also because she is a dream to look at, a dream to handle on the ocean and would be a dream boat to fish from.