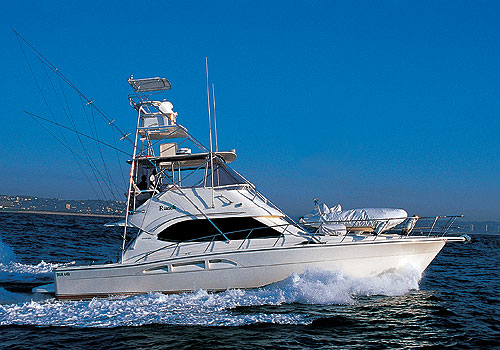 THE cruiseliner Melody was exiting Durban harbour amid the traditional cruiseship sendoff. Close on her heels — in fact, right in her wake — a Riviera 47 Flybridge was also exiting the port.

Aboard Ruach we glided comfortably through the troubled waters churned up by Melody’s massive propellers and contemplated the pros and cons of embarking on a cruise voyage like the hundreds of people lining Melody’s decks (above).

While we might have been envious of those aboard her, the voyagers on Melody’s afterdeck had their eyes glued on the magnificent sportfisher that was but a stone’s throw behind them. I would hazard a guess that the green-eyed monster of envy had reared its head in many of their minds. “Look at those lucky guys going off fishing in that fancy boat,” one could almost hear them say.

How right they were. Just being aboard Ruach was incredibly exciting. Owning her, I can only presume, would be the ultimate.

Two-and-a-half years ago, Derrick Levy of Boating World, the South African importers of Riviera craft, and I had exited the same port to undertake a formal boat review on this new and very special craft. (See SKI-BOAT July/August 2004 or visit www. africanangler.com.) Now, in Derrick’s words, they have “fine-tuned the Riviera 47 into one of the best marlin fishing sportfishers in Southern Africa”. This time he wanted me to take her for a ride and give my impressions of Ruach, “The Marlin Hunter”. 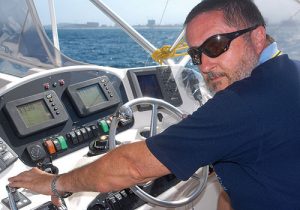 With the owner, John Davy, and skipper Captain Duncan Maple aboard, we overtook Melody on her port side as she set a course into the north-east, giving all aboard her a clear view of the magnificent sportfisher cleaving a choppy sea while planing at just over twenty knots. To me, this sight epitomises the grandeur of offshore boating. In the meantime, I was simply enjoying the craft’s feel as we moved into the shallower and less turbulent waters off Durban’s beachfront.
During the time we spent at sea that afternoon, I reconfirmed the assessments I had made and committed to paper two-and-a-half years ago.

So often I wonder whether the initial experience of playing with a craft of this size and power prejudices me when I’m reviewing a craft, giving me a rose-tinted view, so to speak. However, after rereading my earlier review on return from my reacquaintance with her, I know I got it right.
In a nutshell, the Riviera 47 Flybridge reacted identically to how I remembered her, in very similar conditions that we’d had for the first review — a moderate north-easter that had blown for a few days. With her twin Caterpillar C12 turbocharged diesel engines each pushing out 700hp, she moved up the coast effortlessly at a comfortable 20 knots with the wind and sea on her starboard bow. To quote from the 2004 review, “Her weight, her 50ft-plus overall length and her hull design gave her a perfect ride. With her rev counters synchronised at 1 800rpm and the GPS showing 19 knots, we rode the sea regally and in comfort.”
This outing was a virtual replay of my previous experience.

The same applied to trolling patterns at sea and the run home in a north-easterly sea. “The easterly wind and sea were not big enough for the Riviera,” I said then, and again on her return to port, a little bow-up trim and enough power to have her planing the running sea had us almost gliding back into the harbour entrance.

One aspect of this craft’s extras that I need to elaborate on is the fitting of a stern-thruster below the waterline on the transom. Not only does this assist in the mooring of this craft during windy periods, but it is also of great assistance when positioning the craft’s stern during a fight with a big marlin.

Often a lot of tubulence and energy is created with the traditional forward/reverse throttle/gearbox gymnastics that sportfisher captains love when they’re manoeuvring a craft’s stern with the main engines. On Ruach small lateral stern movements can be brought about by the use of this thruster motor, achieving a quicker repositioning of the transom with a lot less commotion that tends to often excite the fish one is trying to control.

I firmly believe it will, in some instances, avoid the problem of having the boat pull away from the fish, thereby resulting in the loss of line one has fought so hard to retrieve.

On the question of fighting marlin, the swim platform originally fitted to Ruach has been removed in order to offer less obstruction to a leadered fish that changes direction and has to be walked from port to starboard. Whilst there are two schools of thought regarding swim or marlin platforms amongst the world’s top marlin captains, it’s a question that I hesitate to debate in this forum. John is adamant he has done the right thing for his fishing style from Ruach.

I queried whether the removal of the swim platform “obstacle” had not been negated with the installation of the stern thruster, but John’s view is that the tubular stainless-steel guard around the thruster will prevent any snagging of line or trace while fighting a big fish.

With help and advice from Brad Kidd of BMK Fishing and Photography who specialises in supplying top-of-the-range accessories and tackle, and fitting out big game sportfishing craft, Ruach has had a number of changes made to her fish deck, to make the area more practical for fishing, as well as enhance her appearance.

In an exercise such as this, a line needs to be drawn between necessity and luxury.
The Riviera 47 Flybridge comes with many options and the options chosen at the time the craft was ordered were comprehensive enough to satisfy all but the most fastidious of owners.

However, after more than two years of use here in Durban, off Richards Bay and in the Bazaruto Archipelago, John decided to give the fish deck on Ruach a facelift. He’s put into effect all his personal theories and experience, so that he’s now able to say, “I have a craft which is 100% fishable to my personal, exacting standards.”

He showed me item-by-item what changes had been made, and explained the reasoning behind them. The additions are as follows: 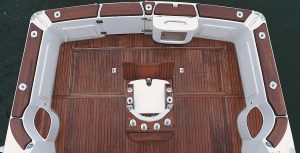 TEAK DECK
“I wish I had originally ordered this extra from the factory,” were John’s words. The new deck — which originally had carpeting — enhances the cockpit section of the Riviera 47. It is the perfect flooring for a sportfisher, as has been proved worldwide on top-of-the-range sportfishers and luxury cruisers where it is the decking of choice.

Teak provides a non-slip, sure footing in rough seas, and is even more effective when wet with saltwater. Furthermore, it cleans up well and is always cool underfoot.

TEAK GUNNEL TOPS
Whilst they’re obviously aesthetically pleasing, these too have practical benefits when anglers are working the deck, that is when setting rods and leadering big fish. I have always felt happier hanging onto a big fish while leaning over teak rather than ultra-smooth GRP finishes.

STAINLESS-STEEL ROD HOLDERS
A new style of rod holder has been selected with an adjustable rod butt clamp. With these, the locating pin that holds the rod in a fixed position is adjustable, so those working the deck can set the rods in varying positions when trolling a wide spread.

FIGHTING CHAIR
The basic chair supplied by Riviera has been refashioned to fall in line with the latest Aussie-style of fighting big fish with heavy drag settings and a seat harness (see SKI-BOAT Sept/Oct 2003).

These refinements involved redesigning the foot rest setup. It now has a teak foot rest so that an angler can comfortably stand up on it without slipping, even if he is barefoot and a lot of water is taken over the transom during backing-up manoeuvres.

A beautifully designed “rocket launcher” has been added in place of the original chair’s backrest, as well as certain teak extras that vastly improve the overall look of this, the major feature of the fish deck.

OUTRIGGERS
Originally, Lees 34ft outriggers were supplied with the craft. These first-class stayed riggers have now been repositioned so that they rake backwards. This makes them look better when held in their upright position, as well as when deployed. It also makes it easier for the deckies to work the lines and avoids the need for tag-lines to reduce the amount of dropback.

The rigging of the riggers for both short and long lines — as well as teaser lines — has been done to perfection, and I could not fault them either in operation or looks.

BAIT STATION
The Riviera 47 has a chest freezer and washbasin positioned against the port cabin bulkhead on the fish deck, and its top was smooth GRP. In the revamp two simple white cutting boards with drain ridges have been mounted on top of this very slippery surface. It’s a simple, yet very effective modification. Rigging of baits has been changed from being an awkward task to being a practical exercise, even in rough water. 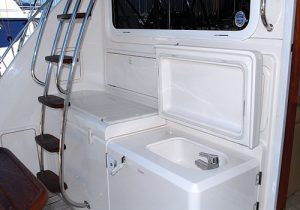 ROD STORAGE
On any sportfisher the question of how to stow rods and reels when they’re not in use is always a problem. I have seen so many variations on a theme in this regard, most of which not only detract from the aesthetics of the craft, but also get in the way. An example of this is the so-called “hanging brackets” above one’s head on the ceiling of the main saloon, which I dislike.

A brave decision on John’s behalf was to strip Ruach’s starboard cabin of its matresses and bedding, and revamp this into the primary tackle room. It has specific holders for the “big guns”, as well as storage for ancilliary loose tackle and spare tackle which can be stowed in the cupboards. Smaller rods and reels can be stored above the main saloon ceiling, where they’re not visible, and in a locker on the flybridge.

These major changes, as well as a few minor extras, have — in my opinion — added substantially to the fishability of the Riviera 47 Flybridge. It is heart-warming to listen to the stories of those involved in the adaptation of this magnificent craft and appreciate both their thought processes and fastidious attention to detail in their personal quest for perfection.

I reread my closing paragraph of the formal review of the Riviera 47 Flybridge from two-and-a-half years ago. Indeed, I am just as captivated with her today as I was then:
“Returning to reality was extremely difficult after my day on this craft. I had to stand back, admire her and force myself to drop the envy, because she really is a craft of which dreams are made.”