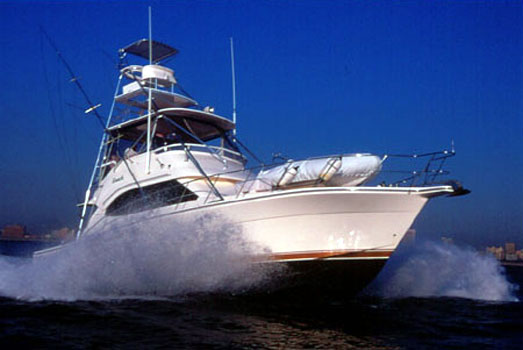 SWEET DREAMS ARE MADE OF THIS

GHOST-LIKE in the half-light of an early autumn day, Ruach slid out of her mooring. Her silhouette, mirrored in the surface of the marina, highlighted her stately progress down the waterway, turning the craft moored on either side into a guard of honour.

Derrick Levy and I, aboard his Riviera 40, led the way like a patrol boat guiding royalty.

Watching her intently as we made our way into the main harbour channel for eventual exit to sea, all I could think was, “One word: Perfect!”

One man used this saying day in and day out, even naming his boat as such, and that was the doyen of boating in South Africa through the ’50s, ’60s and ’70s — Arnie Levy. Derrick, his son, followed Arnie into the world of boats, and I have no doubt Arnie would have been immeasurably proud of his son at that moment. For there, resplendent in all her glory was Ruach — a Riviera 47 flybridge convertible — the latest and arguably the best thoroughbred sportfisher to be imported into South Africa.

Riviera Marine (Int) Pty Ltd is a premier Australian boat builder, with its factory based at Coomera on Australia’s East Coast. They produce a range of upmarket craft, but it is their sportfishers in the 30ft to 57ft range that have made them a force to be reckoned with throughout the world.
Australia’s rich big game fishing resources have been targeted extensively since the early 1950s. Due to the size of fish being targeted and the Aussie style of working fish hard, a particular style of craft has been developed. These boats are not only excellent big marlin fishing machines able to handle the seas of the north Queensland coast, but often also provide comfort sufficient for live-aboard clients fishing the very northern Ribbon Reefs. 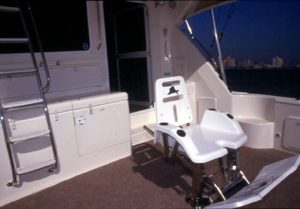 One look at the Riviera’s profile and it is apparent that the early boat builders who pioneered the big game fishing of that area had a significant impact on her basic design. They built boats, improved on the originals and made more and more improvements as the years passed and wood changed to GRP. Over time, finishes, accessories, looks and comfort began to be more important to the owners of these fishing machines, inspiring still further changes.

The Riviera 47 must rank as one of the best craft to have come out of the Riviera factory, and I was thrilled to take control of her and put her through her paces off Durban.

A very light north-easter had blown through the night and a moderate swell was building up. It was particularly noticeable as we ploughed through the notorious bar while passing between the piers at the entrance to Durban’s harbour.

Even though Ruach was fully loaded with fuel — 3 000-odd litres — and 1 240 litres of fresh water in view of an imminent trip up to the Bazaruto archipelago, the way she rode the sea during the photo shoot displayed her heritage to the full.

Back on moorings, Derrick and I joined Capt. David Zondi on Ruach to return to sea so that I could have the pleasure of skippering this craft for a number of hours.

From the lofty perch of the helm station up in the tuna tower, one gets an ethereal feeling of being above everything as one watches the boat and sea interacting. With full controls and sufficient space for two people, it’s an incredible place from which to drive a boat and watch bait and lures being trolled from the craft deck far, far below.

It’s no wonder, as an Aussie captain I fished with in Ghana told me, that it’s commonplace for the marlin captains in Australia to spend the entire day up in the tuna tower.

Out at sea, where the momentum up on high precluded me from making notes, I returned to the flybridge from whence I undertook all the sea trials of this truly magnificent craft. 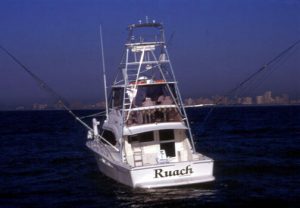 On the Riviera 47, the primary helm station is on the flybridge — there isn’t one in the craft’s saloon. However, a set of binnacle-mounted throttle/gear controls are tucked away under a covered console on the fish deck in case the captain finds it necessary to be really close to the action. The new electronic gear/throttle controls certainly have a substantial advantage over the cable variety of yesteryear: they’re so much neater, smoother and more direct. 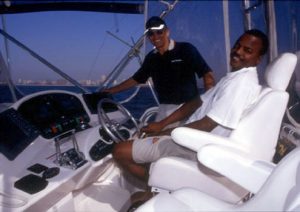 Back on the flybridge, in addition to the top-of-the-range seating, the steering wheel and a full range of electronics, there is plenty of additional space and comfortable seating for four people to join the captain at the helm. A table and washbasin, as well as cupboard stowage, add to the creature comforts which will welcome guests into the captain’s domain.

Full clears surround the command station to ensure total dryness in very rough conditions, plus protection from the wind and cold. The area is even air-conditioned for use in tropical areas.

From the captain’s point of view, it is a home from home — and a very comfortable one at that. It has also been designed by people who have worked big sportfishers attached to very big fish. The captain has a full view of the cockpit area and can also back up quickly and follow a fish backwards, spinning around with ease, aided by the bow thruster, if necessary.

The fishing cockpit is a cockpit of note, designed and finished with only one thing in mind: catching big marlin. Everything possible has been done to assist the angler in the fighting chair when fighting a grander black marlin, and for the deckies to work the deck, wire and tag the fish and remove the hooks prior to releasing it.

That is, after all, what the craft was primarily designed and built to do.
Ruach — the Israeli name for a “holy wind” — is powered by twin Caterpillar C12 diesel motors that each push out 700hp. They are turbocharged, with the turbos kicking in at just under 1 500 revs — precisely the time when this additional thrust is needed to get her up and really going.

As I moved up the coast I confirmed by feel what I had witnessed during the photo shoot. Her forward momentum was unwavering, no matter what swell and chop she cleaved through in that particular sea.
Her weight, 50ft-plus overall length and her hull design, gave her a perfect ride. With her rev counter synchronised at 1 800 rpm and the GPS showing an SOG of 19 knots, we rode the sea regally and in comfort.

As I swung the helm to starboard, and set her bow directly into the swell and chop, I reduced speed to about 14 knots. This was not because I had to, but because I did not want to push her unnecessarily. Once we were far enough out to sea to run a straight course with the following north-easterly sea directly on her stern, I set a course so that we ended up in the “washing machine” the easterly churns up for a few miles outside the harbour entrance. The easterly and the sea were just not big enough for the Riviera 47. With a slight bow-up adjustment via the trim tabs, she glided forward with virtually no effort as we cruised at 16 knots.

While out in the deep I tried a lot of different manoeuvres to see what wake she produced at various trolling speeds. These exercises also allowed me to experience the twin disc feature incorporated into this craft’s transmission system. This permits slip between the gearbox and the shaft driving the propellers, obviating the need for trolling valves, but still with the same result — the ability to troll extremely slowly. Using the twin disc system I was able to troll at 1,8 knots, whereas without the twin discs and with the craft at 500 revs, i.e. idle, we were trolling at a speed closer to 5 knots.

Yes, size definitely makes a difference when trolling, as her constant forward momentum at troll speeds between 3 and 8 knots — regardless of the course taken in the prevailing sea conditions — provided an ideal wave pattern for any lure, from rapala type to big konas. When backing up she responded very well and, likewise, when Capt. Zondi reversed her into her moorings, she responded beautifully.

As far as the boat’s finishes, luxuries and accessories go, if the exterior of the craft impressed me, I was in for another surprise … As I walked through the door into her interior, the luxury and opulence that have been created by the interior designers made me gasp. It is just too beautiful.

This model is very popular as a cruiser as well as a fishing machine, so the facilities and practical layout are of major importance. In this the designers have certainly succeeded — it is practical and has every feature one could wish for.

As the saloon has no helm station, its interior area is maximised for comfort and entertainment with luxurious seating and tables. The galley, situated on the same level, is unobtrusively positioned and has all the facilities and space needed for gourmet cooking.

The master stateroom is big, comfortable and has plenty of lockers and cupboards, as well as a wonderful looking bed. The mind boggles! What’s more, this room — as well the other two cabins and the saloon area — each have their own air-conditioning system. The guest stateroom also has a double bed, and the third cabin has two bunk beds — all very spacious and comfortable. And the bathrooms? “To die for, doll!” 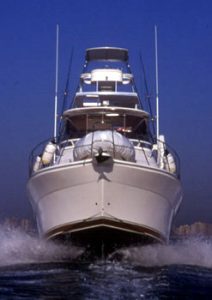 However, as with the other Riviera models I have reviewed, what impressed me more than the magnificent finishes and design was the robust construction and materials used in the craft. Indeed, her beauty is a lot more than skin-deep. I truly believe that the craft’s interior fittings will easily withstand all the rough seas we experience off our African seaboard.

As her new owners, Campas Cruz, intend taking her to the islands off the Moçambique coast for serious gamefishing, Ruach has been fully rigged with a Relax fighting chair, a pair of 37ft Lees outriggers, as well as a 16ft centre rigger, also a Lees. In addition, two teaser reels — electrically operated with cordless remotes — will make the captain’s work that much easier. That’s right, nothing but the best will do for Ruach.

One could write screeds on what is incorporated into the basic Riviera 47, and then add three more pages on optional extras that were fitted to Ruach — and still not do justice to the boat, her designers and craftsmen.

Returning to reality was extremely difficult after my day on this craft. I had to stand back, admire her and force myself to drop the envy, because she really is a craft of which dreams are made.