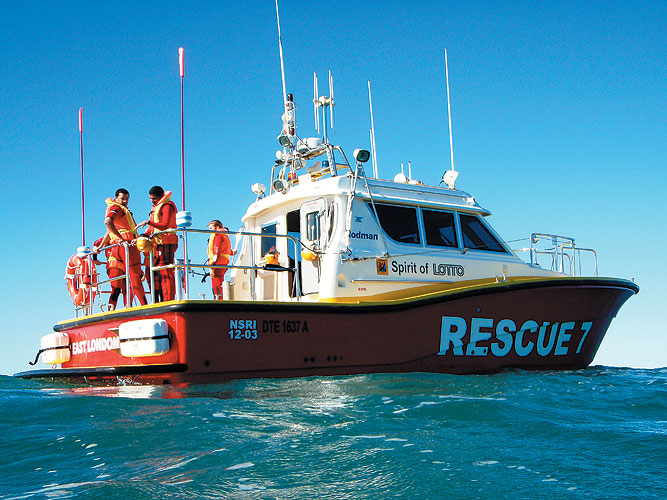 “THE launch of NSRI East London’s new rescue craft Spirit of Lotto, generously sponsored by the National Lotteries Board to the tune of R7.5m, is a milestone in the history of the NSRI,” said Ian Wienburg, NSRI CEO.

The Spirit of Lotto significantly extends the NSRI’s sea rescue range and capabilities on this notoriously treacherous stretch of coastline northwards to as far as Port St Johns, and as far as Port Alfred, down the coast, and 200 nautical miles out to sea.

“This generous sponsorship from the National Lotteries Board,” continues Ian Wienburg, “and the many donors and sponsors who have come forward, is a classic example of what makes the operation of sea rescue on our waters possible. This rescue craft has been made possible through collective team-work and generosity in providing us with the likes of navigational equipment, building renovations, cradles and winches, rescue equipment, flights and accommodation.

“Our previous 9m rescue craft had reached retirement age. Given the type of rescues and medical evacuations we are called to in this area, a 12m rescue craft was the logical choice.  Rodman was able to provide a proven vessel that could be customised to our specific requirements.  From acceptance of the first order to delivery in Durban was just six months and most spares are available ex-factory with a turnaround repair time taking approximately four weeks.” 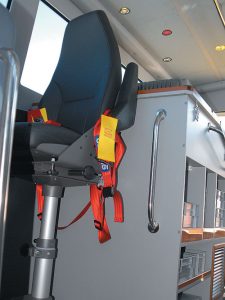 “Being amongst the NSRI volunteers who so willingly give of their time to go to the aid of their fellow human beings is inspirational.  The NSRI volunteers set an amazing example through their culture of volunteerism, to all South Africans.”

This sets the scene for the arrival in Durban of NSRI’s brand-new 12.7m Rodman, Spirit of Lotto, and SKI-BOAT was there to welcome her and take her out for a review.

The launching of Rescue 7’s Spirit of Lotto

HANGING precariously, on what looked like a rather flimsy webbing sling, Spirit of Lotto was swung off her cradle aboard the ship Diamond Land and set to float in the waters of Durban harbour. So commenced the life of NSRI Rescue 7’s latest acquisition which will be based at their East London station. This new 12.7m Rodman rescue craft was set to enter the service of the NSRI and play a major role off East London where she will provide assistance to “those in peril on the sea”.

The Spirit of Lotto had been shipped to South Africa free-of-charge aboard Diamond Land by Macs Maritime Carrier Shipping. What a wonderful gesture!

Rodman’s Laurence Steytler invited me to join him and the future captain and crew of Spirit of Lotto to witness her unofficial launch into South African waters from prime position aboard another Rodman craft. It was a rare and, I might add, nerve-wracking experience that I am pleased I agreed to be part of.

She soon started up, and the crew who were due to accompany her on the sea voyage to East London were transferred onto the new rescue craft. We then followed her from the Durban’s Point to Wilson’s Marina where she had to receive formal sea-worthy clearance before I would be allowed to take her to sea to undertake a review of this very special craft.

At the outset I must say that not only was I privileged to play with this new craft, but also to be able to reacquaint myself with the men of the NSRI. I realised quite soon after meeting them just how far the paths of the NSRI and I had diverged over the last few decades. It really made me reassess my personal attitude towards these unselfish chaps who put their lives on the line to look after all of us who put to sea in small boats. 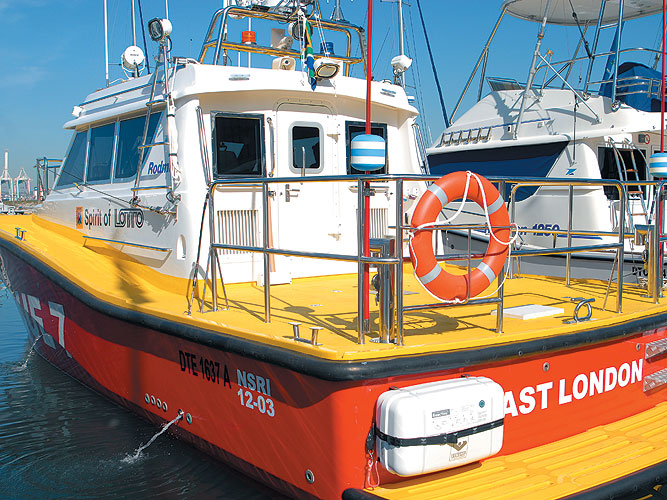 It felt different boarding Spirit of Lotto compared to when testing Rodman’s other sportfishers as she’s a working boat from stem to stern. However, in saying that, she’s far better equipped and finished off internally than I had expected.

Spirit of Lotto has the hull of a Rodman 1250, but there the similarity ends, as the hull of this craft is substantially reinforced to enable her to take on the huge seas she will be expected to endure while in service. Once I took the helm, it was this reinforcing and the additional weight that made me acutely aware that her ride is very different to that of the custom Rodman 1250 and FisherPro I have reviewed in the past.

While feeling the prop digging hard into the water as I applied throttle to the twin Volvo D9-425hp turbo-charged motors, I was surprised just how firmly she rode the moderate sea we encountered off Durban. Increasing speed throughout the power band, it quickly became obvious that this craft was very different to the sportfishing boats I generally take to sea. She didn’t jump onto the plane with alacrity, but firmly and with aplomb, while achieving the planing speed one would expect of a craft of this size. However, once she got onto the plane, her ride was incredibly stable.

Many times I checked the Garmin navigation equipment to confirm her SOG as the feel of her ride made her seem slower. This stable ride into the sea was simply unbelievable.
In this regard, I spoke to Geoff McGregor, NSRI East London station commander, after he had ridden her to East London where they encountered some really heavy head seas, wind and swells, and he reiterated how well she handled the really rough stuff.

Having established that her ride is superb — whether in a head-, beam-, or following sea — I could concentrate on the working details of the rescue craft as opposed to the niceties we expect on a sportfisher. 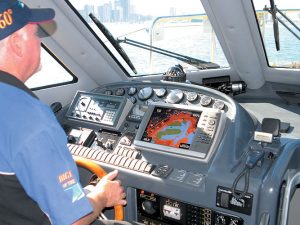 The helm station, for that’s what the inside of the main saloon really is, is set up with an amazing array of instrumentation that is practical for the skipper to use, regardless of sea conditions. Much of this instrumentation is duplicated on the starboard console for the co-skipper. Seating in the saloon is on five special heavy-duty, high-backed seats with substantial seat belts to ensure both protection and stability in adverse conditions.

The navigation, communication, sonar and radar systems installed on this craft — most of it Garmin — were well placed and are interconnected through the navigation station in the starboard aft section of the saloon. All the screens were extremely clear with the light from the windows that surround the saloon providing all round vision. The boat’s navigator can determine what screens show on all consoles, even to the extent that they may all be different. This can be overridden by the skipper, if need be.

Up forward are two bunks to enable rescued, injured p

ersons to be cared for, together with all the resuscitation apparatus needed for this sort of rescue work. Dry lockers as well as wet stowage areas and ablution facilities have been provided, all in compliance with the NSRI’s requirements.

In overall terms, everything the NSRI requires to undertake their rescue work is supplied and installed in a way that is practical for those aboard and substantial enough to withstand the rigours it will have to endure while at sea.

However, while practicality is paramount, and she is designed to be a working boat, her finishes and internal design ensure that this area is still pleasing for those working aboard Rescue 7’s Spirit of Lotto. 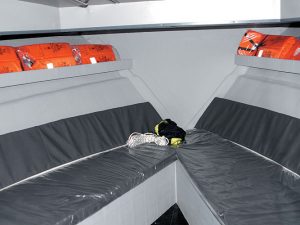 From years of experience the NSRI has also established exactly what they need from the outside working area of a rescue craft. All this and more has been installed on Spirit of Lotto. The aft deck is protected by substantial railings and has a reinforced heavy-duty towing stanchion centrally placed in this area.

Access to the foredeck appears to be very open and unprotected, but people using this walkway clip onto a stainless-steel safety cable that runs the length of exterior of the saloon and up to the foredeck area, which also has a substantial protective railing. Geoff and his crew, having tested the craft during her delivery trip to East London, are extremely happy with the safety features provided on the deck area of the craft.

The all important twin Volvo D9-425hp motors provide more than sufficient power to achieve a maximum speed of 28 knots and also supply a lot of low down torque. This torque is essential for low-speed work in heavy seas, as well for manoeuvrability under these conditions and for towing.

Rescue 7’s Spirit of Lotto, the second of the Rodman rescue craft to be put into service by the NSRI, is not just an asset to enhance the NSRI East London’s capabilities, but she’s of benefit to the entire spectrum of safety offshore in South African waters — and therefore to all of us who go to sea in small boats.