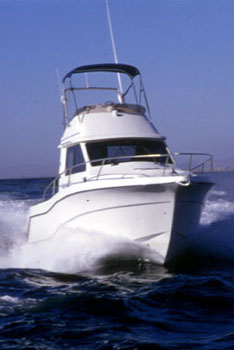 THE Rodman 800 is very different to most if not all the craft in her size I have reviewed over the years — all 28ft of her. One difference is that she is powered by diesel inboard shaft drive motors, and not outboards as we have come to expect of a craft of this size in South African waters.
However, it’s not for this reason that I found her to be such an amazing craft. Rather it was because of her entire design and the many features that her designers have been able to fit into 28ft of boat, while still producing a very good-looking, practical walkaround, user-friendly craft.

For anyone who may think that this craft is too small for a sportfisher, let me remind you of the popularity of the small Bertram in this size range, and the fact that these small sportfishers have accounted for some mighty big marlin over the 20-odd years they have been fishing the gamefish waters of the world.

The Rodman 800 will, I believe, fall into this category. These craft not only have big sea capabilities, but the walkaround feature also offers wider fishing possibilities. At the same time, the interior saloon cabin and heads configuration offer creature comforts in excess of those usually found on craft this size.

When I first boarded a Rodman 800 at the company’s walk-on moorings in Vigo, Spain, I was captivated by her and all she had to offer, but was initially a little concerned about her size. Unfortunately for this craft, she was the last of the three boats to be made ready for testing when I visited the factory. What this meant was that following tests on the much bigger Rodman 1250 and 1120 models, I not only had to get used to a smaller craft, but also needed to adjust my mind so as not to compare her with her big sisters.

In Cape Town it was the same story, with the Rodman 800 again being the last of the three I took control of in the wind-ripped ocean off Table Bay. For those who have not read the review of the Rodman 1120 (see SKI-BOAT May/June 2004), the south-easter was blowing at 25 knots-plus and a reasonably big swell was pushing in from the south-west, making it an “interesting” sea in which to test a boat. Under normal circumstances, a craft this size — in fact, any craft — would not have gone out to fish in these weather conditions, even for a reasonably short run.
Following the photo shoot, I boarded the Rodman 800 in the marginally protected waters off Granger Bay and set about reacquainting myself with her. It had been a good four months since I had run her in the North Atlantic and in the estuary off Vigo. 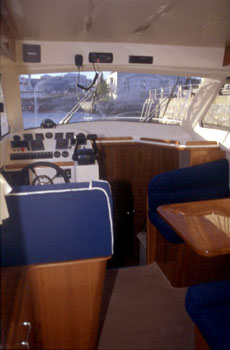 Initially I opted for the comfort and protection of the helm station in the saloon as I put her through her paces. Gradually, as I got the feel of her and established her correct trim position with the hydraulic after-planers which Laurence Steytler, who imports these craft, had had fitted, I ventured further and further out into the rough water.

The 800 I tested in Spain did not have hydraulic trims, and I was soon noticing the difference, especially in the rough water. In very rough water, the confidence that trims provide is very important as one can stabilise the craft laterally as well as bow-up and down. To be able to achieve additional bow-up trim in a big, following sea on any craft is a tremendous benefit — it eases the nerves and makes the ride more comfortable and safer.

There are two aspects that I believe are crucial to establish when reviewing a craft of this size in rough water. Firstly, how does she ride in a big following sea? And — secondly — how long will it take one to get back to port in a big head sea?

In the prevailing sea that day, I was able to test both of these aspects in what I considered to be very severe conditions.

Running with the wind and chop on the starboard aft beam, the Rodman 800 rode exceptionally well at about 16-18 knots as I moved out into open water and the full effect of the swell could be felt. Then, with the wind directly on her transom, I ran with the sea for many kilometres. With the swell’s influence on her forward beam, it was a difficult run because, in addition to bow lift, I also needed to stabilise her laterally by marginally dropping the port trim. Once I got it all correct, the ride was fast and comfortable. She only needed to be pulled out and over a crest if I found a wave or hole out of synch with the general run of the sea.
A number of times I lifted the trim completely, thereby effectively nullifying their effect, just to see how her basic hull design coped with the conditions. Both Captain Johan van den Berg and I were pleasantly surprised at how well she ran the gauntlet, with the only aspect requiring trim being laterally to port. We both believe her big bow and aft stub keel give her notable bow lift and tracking stability when running down-sea. There is no doubt in my mind about this, but I was just that much happier when I reset the trims.

Then it was the long ride back, straight into the sea. This part of the trial proved her pedigree to me. Even though I dropped speed a fair bit to 12-14 knots, we made good progress, and both the boat and crew were comfortable. The overall bow design of these craft — and I refer to all three that I tested — provides a good ride into a big sea at a reasonable speed.

A horrible course in conditions like this is travelling slowly along the crest of a swell with the wind on one’s port bow. It’s wet, miserable and throws the boat all over the place. However, it’s also a course that is often necessary. I followed just such a course with the Rodman 800.
From the comfort of the saloon I was very dry, but spray was being thrown all around. What did surprise me, however, was how well she took the sea. With the twin diesel motors giving weight amidships and her props effectively tucking in her stern, there was a lot less lateral push by the wind and sea than one gets on outboard-powered craft of this size.

In the more protected water that I considered fishable, I ventured up to the flybridge and went through my standard routine of various speeds, from simulating ’cuda trolling with livebaits to kona speed when fishing for marlin. Apart from the effect of the strong wind, the Rodman 800 came through with flying colours.

Even at very low speeds around 1½ knots — only made possible by adjusting the trolling valves fitted to these motors — she was able to cope well, provided I kept the wind on her forward quadrant. At faster speeds of 5- to 7 knots (with trolling valves disengaged), she handled a big figure-of-eight course well, even with the strong wind. Her wake is also pleasingly even with tight, white water. What’s more, I was comfortable and dry on the flybridge.

The final aspect of her ride to be assessed was on the drift in reasonably big chop. Even up on the flybridge, the pendulum effect from her lateral roll was not enough to make it uncomfortable as she held position beam-on to the wind. 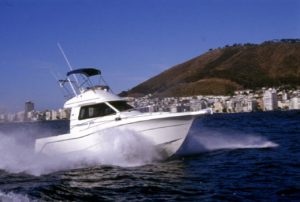 In this review I also need to expound on what has actually been provided on Rodman’s little-big boat.
First and foremost, she is decidedly fishable for light- and medium tackle game- and bottomfishing. If fitted with a fighting chair and outriggers, she would be capable of taking on the heavy tackle brigade too, for she has the backing-up capabilities and manoeuvrability to handle the task.

Her walkaround area is very practical, and the sturdy gunnel bow-rail provides more than adequate support and protection when fishing from this area. 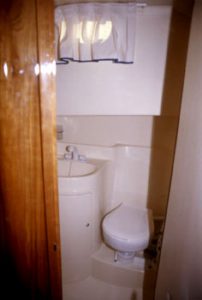 The flybridge is comfortable for two people and enables the skipper to have a good view of the cockpit area, at the same time having at his disposal all the accoutrements to enable him to do his job properly.
It is, however, the features and functionality of the interior design that intrigued me. Not only is it beautifully laid out, but the helm station is comfortable to use, and the rest of the saloon is great for relaxing in.
When one first sees the lounge, galley, cabin and bathroom (heads), one immediately gets the impression that this craft is much bigger than her 28ft length. What’s more, it’s not designed for midgets. I am far from small, and I tried all the “comforts” provided on this craft whilst we were out at sea in fairly rough water. They were great and I was able to go through the motions of fixing food in the galley, going into the bathroom, using its facilities, and then reclining on the double bed. 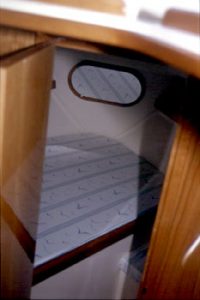 A boat’s facilities often appear practical when you’re on the mooring, but try and use them out in a rough sea — that’s when impracticalities start to show. I still find it hard to believe that so much is provided in this relatively small craft. Take my word for it, I certainly tried to prove otherwise, only to come out even more impressed than before.
As with all Rodman craft, the finish throughout is superb. Not only is it good to look at, it is also robustly made and fitted with high-class continental workmanship. I’m sure it will withstand both time and hard use.

Another aspect that is commendable is the attention to detail. There is no doubt that, due to the number of craft they have produced over many years, this factory’s staff have accumulated knowledge and ideas which are manifest in all their craft, and the Rodman 800 is no exception.
The Rodman 800 is, I believe, the ideal family boat with the ability to provide cruising comforts that the whole family will enjoy, whilst still enabling one to fish in the big league, if so desired.