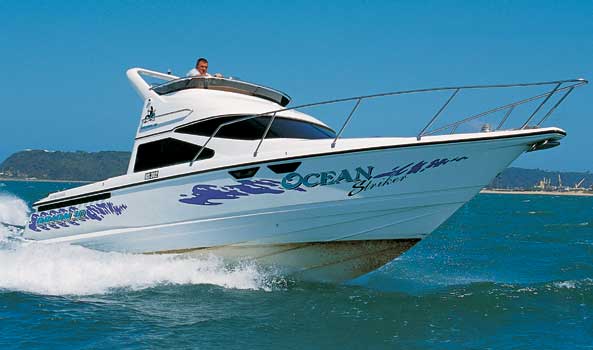 I was relaxed, very relaxed, and happy. Who wouldn’t be? I was sitting on the flybridge of Bruce Challenor’s new Orion 30 with twin 175hp diesels pouring out power as we headed out to sea
The sea before us was a mass of white horses, and a long, flat, white wake followed us as I settled the Mercruiser motors at 2 700 revs.

With the fresh south-westerly on our starboard aft beam and her bow slightly raised with the aid of the hydraulic trim planers, we virtually glided over the ocean. “Yes, this is the life, and this is the boat,” I thought, enjoying the experience …

Deadlines and weather have no respect for man’s demands. As the magazine’s deadline approached rapidly, so did the last of the winter cold fronts that howled up South Africa’s eastern seaboard. The result was no sun for photographing, a sea that no reasonable craft should be out in, and an editor breathing down my neck for the copy. Pressure with a capital “P”!
As soon as the wind eased a little and the sun fought its way through the heavy blanket of clouds, Bruce and I dropped all other priorities and headed for Durban’s Point Marina and the Orion 30.

We were in such a rush to catch the sun that I had, at that stage, paid very little attention to the craft herself. I was more concerned about getting the photography done while the sun was still shining.

Ron Taljaard and Dale Nicolay were in Vetch’s basin on Dale’s boat, waiting to take me aboard for the photo session, and it was only once I was aboard Tip-a-Roo that I had my first real look at the Orion 30 — Ocean Striker.

Bruce Challenor and Tim Driman decided that Hardglass Marine should develop a craft that would be the company’s flag ship and would target a specific section of the upper-end of the offshore gamefishing craft market. At the same time the boat had to be a reasonably-priced sportfisher that would be attractive to the charter boat industry in and around the Indian Ocean islands, Africa’s east coast, as well as the emerging gamefishing areas around the bulge of Africa’s west coast.

Bruce knows boats — after a lifetime in the boat building business he should do — and he searched long and hard before he made the final of two major decisions. He decided he would not design then build a craft, but would rather find one that was well proven and then build it here in South Africa under licence. The second decision was to actually find the right craft to hang his reputation on and invest heavily in. During an extensive quest overseas, he found what he was looking for in Australia. This started a chain of events that culminated in the moulds of the craft being shipped to Durban — and the birth of the Orion 30.

Bruce also imported one completed craft, powered with petrol engines. However, he wanted to commence his marketing programme only once he had a craft he had manufactured in Durban, and one that was powered with diesel engines, so I had to wait — with anticipation — to review her. 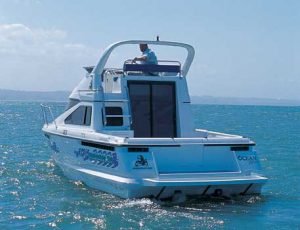 But the wait was worthwhile …
One look at the Orion 30 and one can see she is different in design to the conventional sportfisher. This gives her a sleek, elegant, all-round racy look. The Orion 30 is a boat that will definitely turn heads; she certainly had those of us aboard Dale’s ski-boat open-mouthed as she thundered past us, then followed us and overtook us at speed again and again during the photo session. It was an awesome experience having a sleek 30ft craft bearing down on one at 30 knots. In fact, to be honest, it was a tad frightening!

I am, by nature, a conformist, so even though the hull concept was very similar to my own RobCraft, but just on a much larger scale, I still needed to spend a lot of time with her at sea to be assured that this craft could deliver all that her Australian pedigree promised.
After the initial run we ran in a direction that was easy on both the craft and ourselves, as an ideal way of making her acquaintance. Whilst maintaining a planing speed, I gradually brought her round to face the 20 knot south-westerly which, by now, was unimpeded by the Bluff and the Durban beachfront buildings and was producing a very choppy sea.

Bruce made some comments about not wanting to get wet — that this was the precise reason he had upgraded from a ski-boat — but I chose to ignore the remark and faced the task ahead of me.

Trimming her bow down a bit, we sliced over the big chop. However, in view of the underlying big swell, the speed was excessive, and after flying over a few big ones, I — in fairness to both the craft and ourselves — reduced the revs to 2 400. The ride was much more comfortable and we still made very good progress into what was quite an ugly sea.

Then came the big test. With the wind, swell and chop on our transom, we raced the wind. At well over 20 knots she glided down the big swells with her bow held high, never showing any tendency to yaw. It was a fun run and extremely exhilarating.

However, it’s the craft’s ability to handle the sea at kona trolling speed, as well as the style of wake produced at this speed, that is vitally important for a sportfisherman.

In the rough water and regardless of the direction of troll, I managed to effectively retain a constant troll speed without excessive pitching or rolling and without picking up a lot of spray on the flybridge. She throws a very flat wake, thereby providing good water, both churned and clear, for trolling lures.

At low speed and manoeuvring in and out of mooring — even in the strong wind — she responded well. Out at sea during back-up manoeuvres, she tracked and followed a change in direction adequately enough to fight a big fish. No doubt, manoeuvring will be more positive in the version of this craft with stern-drive motors.

One point I would like to emphasise is her stability, considering her sleekness and deep-vee design. Initially I expected her to be adversely affected by a rough sea, but the hull and strake design of the aft half of the craft provides the stability I experienced and ensures that she gets onto the plane with ease.

As I stated earlier, Bruce had kept in mind the requirements of a charter operation in tropical conditions, where capital outlay must equate with practicality to ensure a viable business. As such, this craft has been designed to meet these conditions, especially when it comes to the fish deck and interior cockpit/cabin layouts. 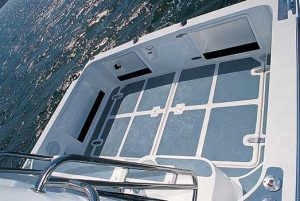 The practical fishing deck has a non-slip finish which is moulded into the hatch covers and deck itself. Access to the twin 175hp Mercruiser 6-cylinder diesel motors is via the two flush hatches on the fish deck. This deck has a washdown drainage system to avoid water leaking into the motor compartments. A good size fish/wet-hatch is also accessed from this area.

The other niceties that finish off this part of the Orion 30 are a transom gate, a substantial and solid boarding/diving/marlin aft platform and a bait/tackle station with a washbasin with running water. Above all, the gunnel height is ideal, especially for light tackle and stand up fishing.
The interior of the Orion 30’s cabin/saloon area — in its simplicity — covers all the needs of a charter craft or pleasure boat which will be used for short-duration fishing trips. 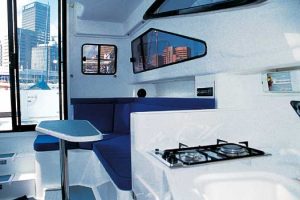 So often in large sportfishers, the interior finish is very luxurious. While this is a very nice feature to have, it takes a mammoth amount of upkeep to maintain its looks. Unless, of course, fishermen are barred from entering this domain.

Bruce is brutally practical and has provided everything that a fisherman requires in a neat, well thought-out interior. Fridge, stove, bunk, wash-up basin and toilet are the basic necessities provided, as well as sufficient seating in the main saloon/cockpit area in which the entire crew can seek solace and comfort from adverse weather conditions, as well as enjoying a respite from the sun if they’re fishing in the tropics. To complete the interior, numerous cupboards and under-bunk and floor stowage is provided to house all the extras that one accumulates on a boat this size. 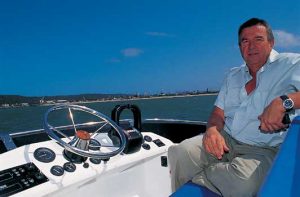 On the craft tested, the helm station is only up on the flybridge, but dual stations can be provided if requested. I found skippering the craft from the flybridge was both practical and dry under the conditions we experienced. In addition, visibility — especially overlooking the flying deck — was ideal. This allows the skipper to keep tabs of what’s happening on the deck, as well as seeing where he is steering his craft.
When I tested Ocean Striker, she was still undergoing sea trials and, according to Bruce, a number of small items still needed attention. However, I couldn’t find these problems and he didn’t point any out to me. Indeed, considering that this is the first one produced in the country, I felt the craft was extremely well presented and is very solid in construction.

The extras, such as fighting chair, outrigger and a canopy over the flybridge, had not yet been fitted, although provision has been made for all of these necessities.

Ocean Striker took some getting used to, but once I got her measure, the more I put her through her paces at sea, the more I got to like her and appreciate the way she performed.

No matter what the conditions — in the calmer water along the beachfront, through the increasing chop and swell as we headed out to sea and into the bad sea out deep — she handled it not only smoothly but, above all, softly. With the backing of Bruce and Hardglass Marine, I am convinced their new flagship — the Orion 30 — will prove to be a front runner in her class and a very welcome addition to the fleet.