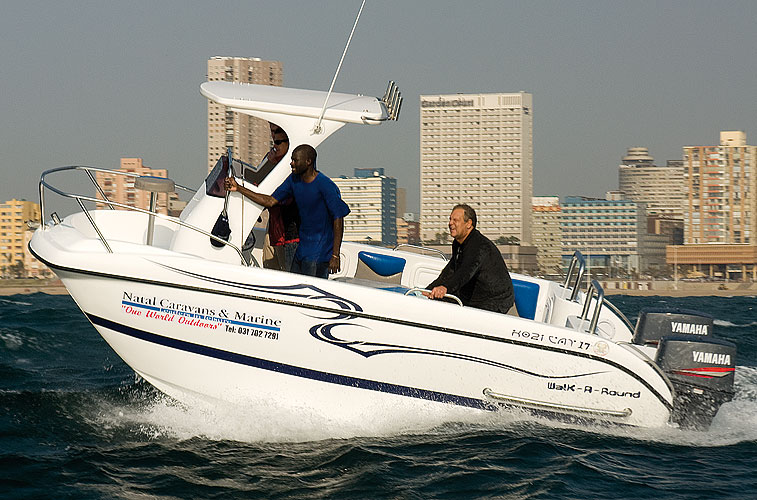 IT’S been a year since I first had the opportunity to test the Kosi Cat 17 for Bill Harrison from Natal Caravans and Marine. Just before the 2010 National Boat Show I received a phone call from Bill asking me to come and see him at the boat show as he want to introduce me to the new Kosi Cat 17 Walkaround.
Interesting, I thought. I really liked the Kosi 17 Centre Console, so was curious to see what the walkaround model would be like.

GENERAL IMPRESSION
At the show I was expecting to see a boat similar to the first Kosi 17, but I walked right past the new craft and had to look twice before I realised that this was the new 17ft Walkaround.
When I took a closer look I really liked what I saw. She’s very simple, neat and spacious, with no fancy gadgets like fridges and other unnecessary equipment on the boat, but she’s also totally different to any other boat of her class in the marketplace. She looks broad and bulky with more space on the deck and in the bow than on the CC.
In short, she looks as if she has been designed to suit fishermen. I couldn’t wait to test her.

CONDITIONS
Eventually the day of the test arrived. Crazy, crazy, crazy, I thought as we radioed port control before leaving the harbour. There was lot of wind, and the sea looked like a hurricane had torn through it. There was a huge swell from all over.
To some extent, these were ideal conditions in which to test the new Kosi Cat 17 Walkaround to see what she was made of. 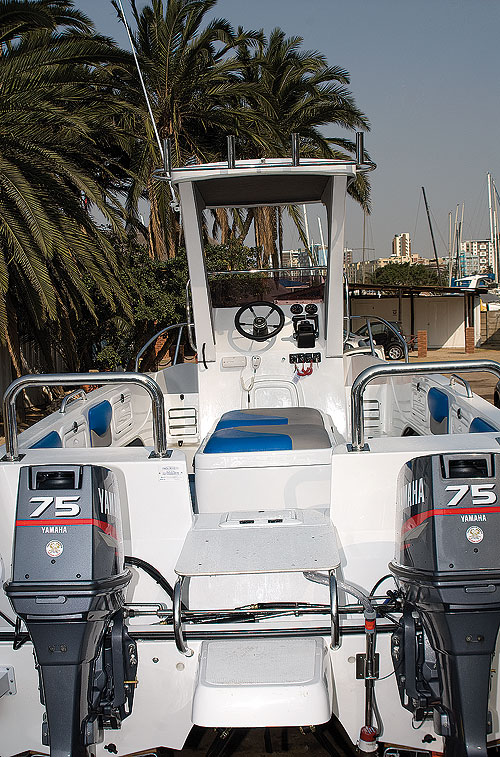 LAUNCHING AND TRAILERING
Bill and his crew had no problem offloading the craft from her galvanised breakneck trailer. Towing her behind the car was also easy, and she doesn’t swing around which is a good indication that the craft’s weight is correctly balanced on the trailer.
When we got back, reloading her was even easier: she ran straight onto the trailer, and was driven onto the rollers right to the front, with her keels perfectly positioned in the vees.

MOTORS AND CONTROLS
This test boat was fitted with two 75hp trim-and-tilt Yamaha two-stroke motors. The controls were binnacle mount with hydraulic steering. The motors were well-suited to the boat and the controls were smooth. Even though they were cable controls, it was still easy to slip her into and out of gear.
In comparison with the centre console craft which was fitted with two 60hp motors, I found the Walkaround to be much more lively. 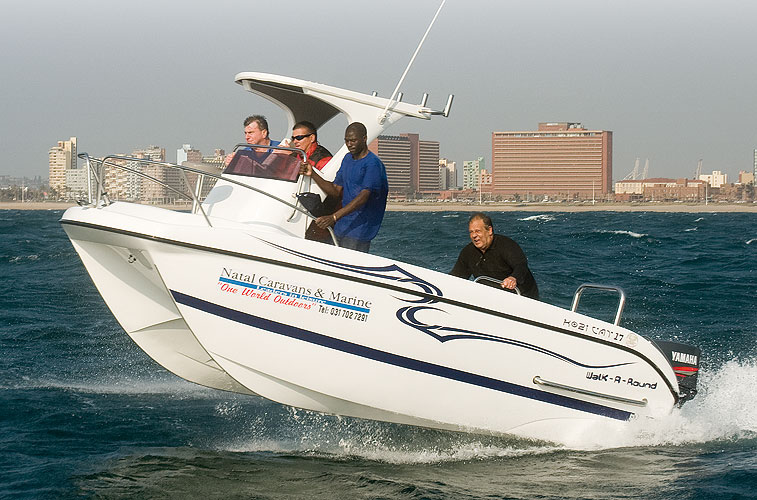 PERFORMANCE
This boat’s performance certainly impressed me. I’ve tested the 16ft, 18ft and 17ft CC Kosi Cats, and I have to say that for me the 17ft Walkaround is the best by far, cutting through the water like a hot knife through butter.
She rides very proud in the water. Often when this happens the boat experiences cavitation, but not so with the Kosi Cat 17 Walkaround. She rides just like her sister, the centre console, but feels different because the walkaround console sits further forward.
I took her into the swell and she handled the pounding with grace. In that upside-down sea, I swung her around in all directions, making circles and accelerating after the turns, and didn’t experience any cavitation. In a following sea she also performed awesomely, with no broaching. I think even Bill was really impressed with the way she handled the sea.
Although all of us were soaking wet, we were impressed with her ability to handle this kind of sea. I like to keep dry when I’m out on the ocean, but that would have been practically impossible on any open boat in this sea.
The Kosi Cat 17 has an impressive turning circle, one of the best I have been on, with no feeling of leaning to one side or making you feel that you are unsafe. I haven’t experienced this type of performance with a 17ft boat in quite a while, and this is the type of boat I would trust in a big sea.
Eventually Bill asked me to test her with just one 75hp Yamaha. This is going to be interesting, I thought … Well, within five seconds we were on the plane with four people on board. Quite incredible!
She was running so proud that I didn’t have to fiddle with the trims at all. Out the hole she climbed quickly onto the plane, and as mentioned, in a full 360 degree turn and out the hole there was no cavitation. All these characteristics make her ideal for surf launching.
Because of the way she sits and rides in the water, she ran very smooth. She was also very stable at slow trolling speeds, and in general she handled beautifully and with ease.

LAYOUT
There are a number of features on the new 17ft Kosi Cat Walkaround that particularly impressed me. Firstly, they have raised the height of the gunnels and have also padded them so that they’re more comfortable to lean against. There’s also space in the gunnels where you can store tackle.
Secondly, upfront they have made seats on both sides of the anchor hatch, with tackle drawers on both sides too. The layout upfront also gives you easy access to the anchor.
The walkaround console has been fitted further to the front rather than in the centre, with some tackle drawers ahead of the console. She has a moulded fibreglass T-top which can be folded down when you’re travelling, and stainless-steel rodholders are fitted to the T-top. In the front of the walkaround console there’s a removable seat that can be left at home if you need more space.
Another great feature is the very handy livebait well which has been fitted in the transom — ideal for mackerel in ’cuda season. The Kosi Cat 17 Walkaround has spacious fish hatches on both sides, with the fuel tanks in the hatches on the deck behind the console. Indeed, it looks like a lot of thought has gone into the development and design of this boat. 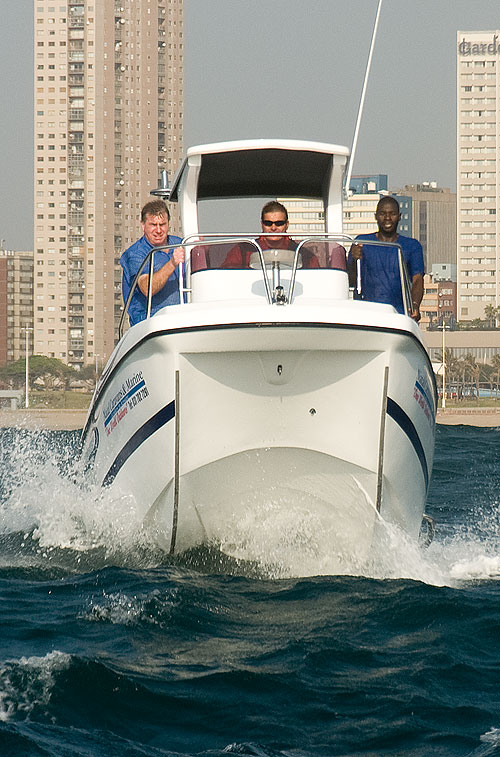 FISHABILITY
Personally, I would be happy to take this boat out in all weather conditions and fish with her for marlin as well as any other gamefish. She is very stable, and with her high, padded gunnels, I think she would also be ideal for vertical jigging, dropshotting and bottomfishing.
She is very stable at a slow trolling speed and would be ideal for the type of gamefishing we do in KZN, the Eastern Cape and Moçambique. The amount of open space on this boat means she’s also well-suited to flyfishing.

FINISH & CONCLUSION
It’s clear that Natal Caravans & Marine have come a long way since they first introduced the 16ft and 18ft Kosi Cats to the market. It is also very impressive to see that, building on previous experience, they have vastly improved their product. The finish on this boat is of the highest quality and could easily compete with the top boat builders.
These days it’s all about quality and customer service — before- and after the sale — and I believe Bill and his staff at Natal Caravans & Marine must be complimented on their impeccable service and products.
Whether you’re a novice or a more experienced angler looking for a boat in this class, the Kosi Cat 17 Walkaround is a craft you ought to take for a demo test ride.

Kosi Cat 16 – A 5m craft by Natal Caravans and Marine