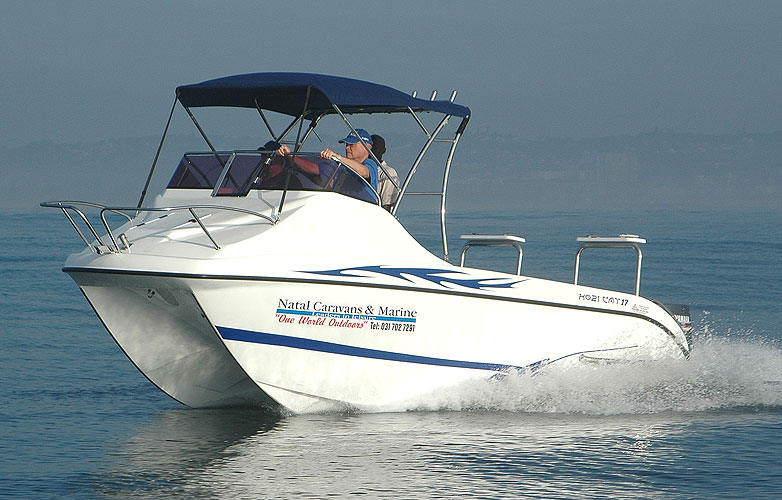 THIS is the third model of the all new Kosi Cat to hit the market. Bill Harrison from Natal Caravans and Marine asked if I would test her, and Vince Warriner came along for the ride.
To add to all the fun of testing the boat, I told Bill that we had to meet at the Rod and Reel Club in Durban harbour at 5am so that we could be on the water when the sun was still low. This would give me an opportunity to get nice photos of the craft with the sun still coming up. The best laid plans …
We duly launched at 5.15am and got out to sea, only to find a cloud bank hanging in the east. Well, we would just have to test drive the boat until the sun was up, and then have the photoshoot. This gave us a big laugh because all the old men who were with us don’t like getting up early. I believe one man’s wife even got up at 3am to make him his lunch. I take my hat off to her — he is a lucky man! 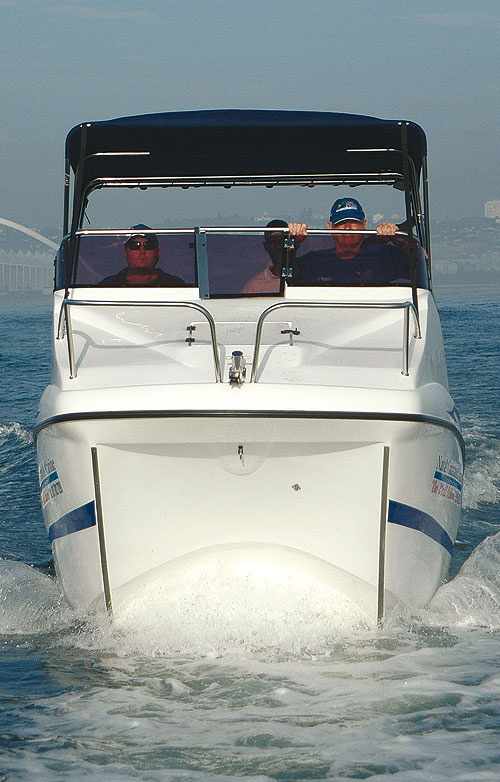 CONDITIONS
Except for the cloud bank in the east the weather was perfect. Smooth seas and no wind — the only thing we were short of was a nice cup of tea.

FIRST IMPRESSIONS
Seeing as this was the third model of the all new Kosi Cat I was testing, I thought I knew what to expect, but I was totally wrong. When she arrived she stood on the trailer, snow-white like a new bride. She looked bulkier than I’d anticipated, but beautiful nonetheless. I’d enjoyed riding her sisters, the centre console and the walkaround, but for some reason this one looked totally different.
The Kosi Cat 17 FC wasn’t as wide as the 20ft cat I’d tested the week before, so the towing in traffic and on the open road was much easier. Offloading her into the bay was very simple: Vince and I stood on the deck while Bill pushed us down the slipway and into the water.
After the test I drove her effortlessly straight back on to the trailer. These days boat builders custom fit the trailers to suit the boat which makes a big difference. 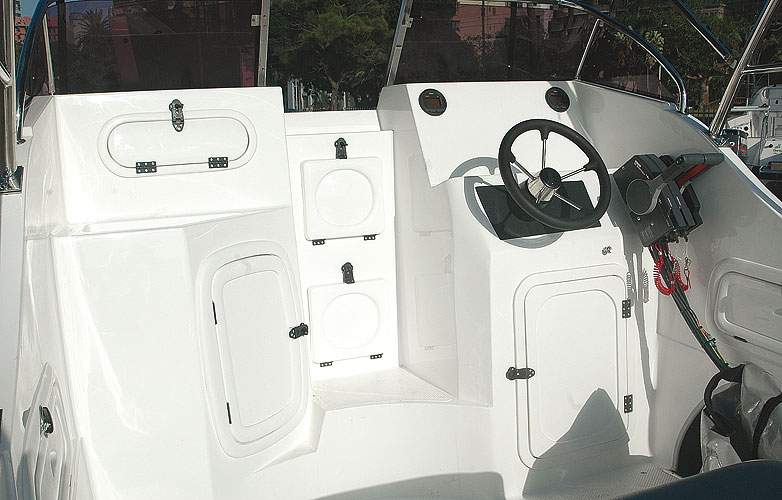 MOTORS AND CONTROLS
This Kosi 17 was fitted with twin 60hp 2-stroke Yamaha motors with normal sidemount cable controls. I think Bill has the right combination and the 60hp engines suit the 17ft Kosi Cat very well. As with all the other models, the controls were very smooth and I did not experience any problems getting her into or out of gear.

PERFORMANCE
In my opinion the Kosi Cat 17 is one of the best boats on the market in this size class. With three of us on the boat, I pushed her from a stationary position to full throttle and we were on the plane in four seconds. It’s just amazing how easily she gets on the plane and how beautifully she turns, even at a fair speed. There were no signs of rolling or leaning to one side or the other — she just turns.
In order to prove to Vince how well this boat runs with one 60hp on the back, I lifted one motor and ran into the swell. Within 15 seconds we were on the plane on one engine with three of us on board. This boat is unbelievably impressive.
When I ran her with the swell there was no indication at all that she might broach. Next, I turned her around and ran into the swell. At 20 knots she just glided smoothly over the oncoming swells without pounding.
Then I executed a figure-of-eight to determine her turning ability in the surf as well as to see if the engines were mounted correctly. She gave me a perfect “eight”, ten-out-of-ten, in fact. 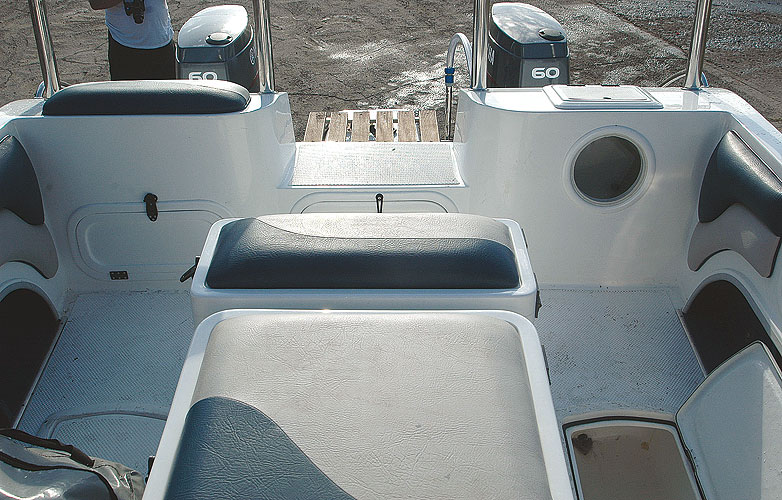 LAYOUT
All the lines have been changed to make the new Kosi Cat 17 look modern — and, yes, she looks good.
Her console has been positioned quite far forward which opens up a lot of space on the deck. A front window opens to give you access to the anchor hatch, and below the door in the front visor she has two hatches with small drawers inside. This is really the only flaw I could find on this boat: I would have liked that area to be a little more spacious.
On the left in the front she has a door that leads to the front spacious hatch underneath the front console. There’s another hatch door to the front under the steering column.
Plenty of space has been provided for all your electronics to be flush-mounted. In order to provide some shade they’ve fitted a stainless-steel T-top with rod holders on top. The gunnels have been raised and padded for extra comfort when you’re fighting a fish and need to push against the gunnels with your knees.
The fuel hatches are in the middle of the deck with seating on top of them. Behind them is a nice storage hatch. The fish hatches have been sunk into the deck. At the stern there’s a livebait well on the left and battery hatches on the right-hand side, with a comfortable seat on top of this hatch. 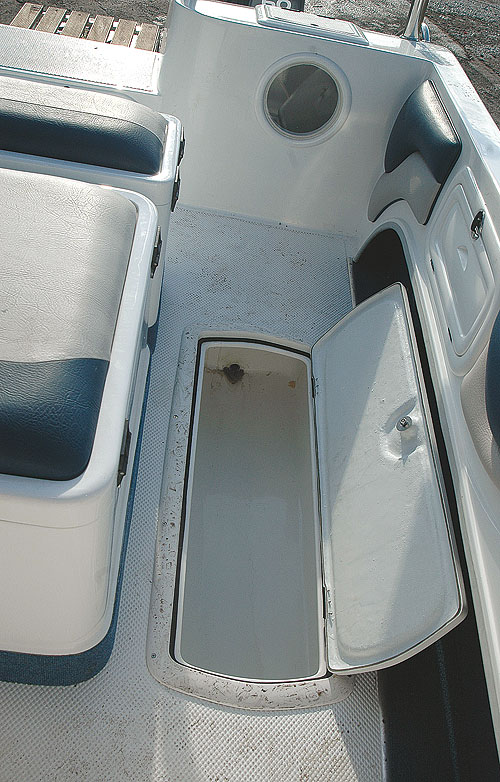 CONCLUSION
As with the other two new Kosi Cats, the designers have done a good job on this boat.
Personally, this is one of my favourite small boats currently on the market. She has everything I would look for in a boat: she’s very stable and spacious, she gives a smooth and soft ride and she is very easy to put in and out the water. Her towing capability is also great and one can easily run her with twin 60hp motors.
However, you might value other aspects of a boat’s performance, so before you buy a craft make sure that you test three or four boats to see what suits you best — but make sure this is one of the boats you test.