ADVENTURE ON THE HIGH SEAS

A RECENT phone call from Leon Lee of LeeCat tweaked my interest. “Brother, I have got a boat that’s going to blow you away,” he said. The upshot of this conversation was that the walkaround version of the Lee Cat Expressa 900 (see review in SKI-BOAT May/June 2008) stopped off in Durban for a review enroute to Richards Bay before finally heading for Madagascar’s Nose Bé.

Following a long tow from the LeeCat factory near Port Alfred, the Expressa 900 Walkaround was slipped into the water on the public slipway alongside Durban’s Point Yacht Club. This is where I first set eyes on her as she eased her way through the moored craft out into Durban Bay. Aboard the photo boat I watched with interest as both craft got onto the plane and, after obtaining harbour clearance, headed for the ocean and a lumpy north-easterly sea that awaited us.

Watching her run these few kilometres allowed me to see how her hull worked the troubled water. I find this facet of a craft’s performance to be invaluable in forming a general impression of the boat, especially when it’s later correlated with the feel of actually skippering her at sea. I liked what I saw. In fact, it encouraged me to get the photoshoot over and done with as quickly as possible so I could get behind her helm and have her completely under my command. 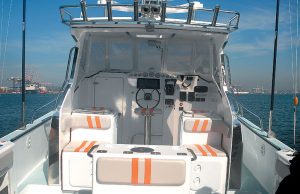 Leon explained that he and his brothers at LeeCat were so happy with the forward console version of the Expressa 900 that they decided to design a new top deck that would incorporate a walkaround. This would make the craft more versatile for general gamefishing as opposed to being dedicated to the top end of the big gamefishing fraternity. The brothers were so happy with the redesigned craft both in appearance and performance that they were more than anxious for me to review her before she headed overseas to go on charter in Nose Bé.

As the LeeCat Expressa 900 Walkaround was due to pass Durban during her delivery to Richards Bay for the fitting of Nobeltec instrumentation by Kas van der Merwe, the opportunity of running her in the waters off Durban was irresistible.

A 30-footer — nine metres in mettric terms — is a big boat, and she looked even bigger on the road trailer that had carried her all the way from Port Alfred to Durban. It’s a rig that certainly turned heads while parked at the Point Yacht Club, and I have no doubt it also impressed many motorists as they passed her on the road. Indeed, she is a striking looking craft both on the trailer and on the water.

@Venture, as she has been named by Jan Griesel, her new owner, is destined for the adventure of a lifetime. Jan’s plan was to take his craft by sea under her own power from Richards Bay to Nacala on the northern Moçambique coast, then directly across the Moçambique Channel for approximately 200 nautical miles to her eventual home in Nose Bé.

With this in mind, I took the helm of @Venture to put her through her paces in the rough north-easterly sea. I wanted to evaluate her performance for fishing off our coast, and also to get an indication of how she would cope with the long sea voyage she was destined to undertake.

The sea conditions that we had been dealt were not nice in that the previous day’s stormy north-easterly had left a very lumpy ocean. Add to this the fact that the north-easterly had resumed its blow, increasing in strength throughout the morning. Combine a 30ft hull with a bumpy swell — often less than 20ft apart — and add 3 000 revs on the craft’s twin 200hp Suzuki 4-stroke motors, and one can expect a very interesting passage over the ocean.

That’s exactly what happened. With 15 knots of wind on the starboard bow I gradually eased @Venture’s throttles forward until we achieved an SOG of approximately 20 knots. It was an interesting start, because during the first kilometre I worked up speed gradually. I wanted to get the feel of the craft and also to judge what motor trim would produce by way of softness of ride, while still maximising her forward thrust. To begin with, at a speed of about 12 knots, we were being thrown about quite a lot as her fine entry prows were having to take on the out-of-synch swell each and every time. Increasing speed had the effect of her getting on the plane, thus carving the tops of the swells as she virtually flew over them. This is where she really came into her own. I had set a course up the coast towards Umhlanga lighthouse and enjoyed the ride so much that I opened her up to over 4 000rpm. Not only was she flying — literally and figuratively — but she was also able to keep up the pace. I was, however, hypersensitive to the craft itself, especially since her owner was aboard, and I was reluctant to sustain the run. We dropped back to a speed of 20 knots, which relaxed all those aboard and allowed me to enjoy the ride while playing around with trim settings, in the process maximising her performance.

Then came the big test — head-on into the prevailing sea and wind in a test that is hard on both craft and crew, but is an essential trial if the craft is to cover in excess of 2 000 nautical miles across the ocean. During such a voyage she is going to have to take on a hard sea for long periods of time.

I initially dropped her SOG to 14/15 knots and headed directly into the north-east. Could I keep up the speed for hour after hour?, I asked myself. Yes, was the answer, because all those aboard were barely holding on. The more I pushed up the speed, the quieter the talking aboard became and the firmer the handholds. So I concluded that whilst the craft could have proceeded at about 20 knots, neither she nor her crew would have enjoyed it.

On a reciprocal course I trimmed up her bow and ran with the sea and wind directly on her transom. She liked a lot of trim and weight aft and then raced forward, providing us with a smooth and effortless ride, surfing the swells and cleaving the wave tops with her fine entry that threw the spray wide and far aft.

Although the swell was not that big, I gained the impression that even in a very big westerly following sea, she would not broach if correctly trimmed and weighted.

With the so-called long-range requirements of the craft effectively tested, I was then able to put her through her paces under what I would call local fishing conditions. 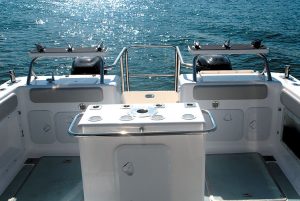 The twin 200hp Suzuki 4-strokes, pushing 19 pitch counter-rotating props, provided the Expressa 900 Walkaround with incredible performance, both out the hole as well as when I demanded instant thrust while planing in the mid-range speeds in rough water. I ran her through a number of trials in the big swells that were peaking over Limestone Reef where I was playing with her as if she was a smaller ski-boat. I was pleasantly surprised not only with how quickly I could bring her about, get her out of the hole and back onto the plane to face the following oncoming swell, but also with the way she maintained her momentum after cresting the wave.

Through the full range of trolling speeds her hull was stable in the water and did everything I expected of her. With her size and weight, her forward momentum was excellent and was constant, as is traditionally required when pulling lures.

As a sportfishing craft for light tackle fishing, flyfishing, dropshotting and deep jigging, she is ideal. On the drift she lies side-on to the wind and sea, and is stable, therefore allowing anglers to utilise the full length of her gunnels right up to the bow area. Even in the rough sea I found it easy to move up to the forward area as if I was either following a fish or moving forward to cast, work a plug or deep jig.

With any walkaround one understands that the primary sacrifice is cabin space. My criteria in this regard is simple — assess what you as an individual require from the cabin/saloon arrangement on a craft, and then relate it to the fishing practically before deciding whether you want a walkaround or a forward console craft. Elementary, you say. Yes, but most people walk into the cabin area of a walkaround and talk size and size only, before thinking the entire practical situation through.

I spent a good deal of time on the craft with a crew of four and encouraged them all to use the cabin space. I was pleasantly surprised at how much room was actually available. Whilst fishing I guarantee the perception of spaciousness would increase as crew movements to and from the fish deck area increased. My final assessment in this regard is that the layout was very practical and would supply more than adequate protection for the entire crew in adverse weather conditions.

Within the helm station area the central positioning of the skipper’s domain proved to be both efficient and comfortable throughout the full range of trials. Even though I missed the electronics that still had to be fitted in Richards Bay, I had sufficient instrumentation to allow me to appreciate the twin Suzuki 200s’ performance, as well as their ability to make the Expressa 900 Walkaround’s performance in the water extremely exciting.

Inside the protected confines of the saloon area and the forward cabin sector there is adequate lounging space and comfortable seating. Here one can while away the non-productive periods of the fishing day and, more essentially, it provides protection for all aboard — and a firm handhold during the long runs to and from the fishing grounds.

However, it is the fish deck on a craft of this size that always captures my attention, not only from an aesthetic point of view, but also from a practical viewpoint for the style of fishing it is to be used for. This craft is destined for Madagascar, and therefore light tackle gamefishing would be the order of the day.

Centrally situated on the fish deck is a console-styled rod holder that can be converted to a fighting chair base with little effort. Cupboards are built into the console, as is padded seating, and yet there is still plenty of space for two anglers buckled into two good fish to pass each other between the console and the gunnels and/or transom. I liked the transom configuration, as well as the padded inner gunnel facing panels. Add to this the multitude of storage lockers in the gunnel and transom sides, and one has a fishing cockpit that is very user friendly indeed. 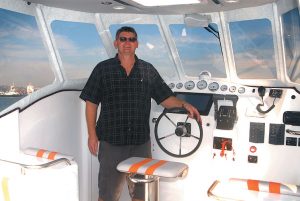 Right up front, having bypassed the cabin using the walkaround area, a useful foredeck area has been provided for anglers to ply their sport with a fly, popper or jigging outfit. Here they are safe within the confines of a substantial stainless-steel bowrail with supports on the curved front face of the cabin.

The Lee brothers have designed a tremendous number of extras into this craft, and if you inspect the finish and hardware closely you will be more than pleased with what you see and feel.

The Expressa 900 Walkaround is a very fine craft indeed, that will prove to be both an extremely stable fishing platform as well as a most seaworthy craft. Any owner will take great delight in her appearance, as well as her performance.