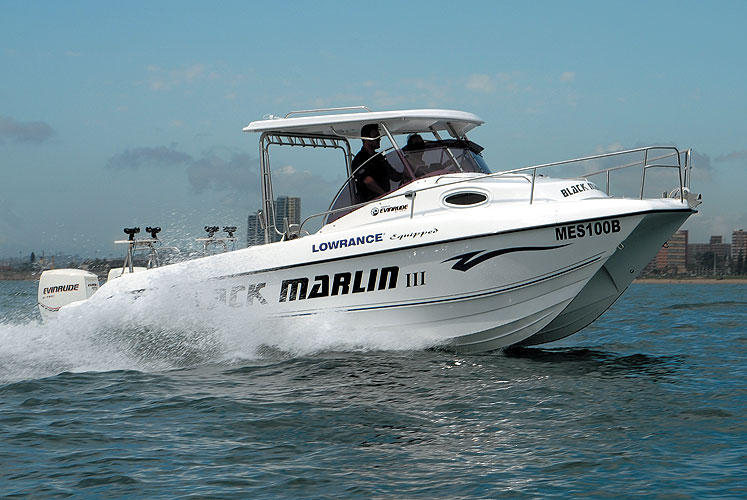 SUPERDUCK’S AJ Smith was looking for a 24ft offshore craft to complement the range of craft he markets and to fill an important gap in this range. Superduck designed and built the very successful Lightning Cat 190 and their big Thunder Cat 800, and thus needed a craft to bridge this void. The craft needed to facilitate the serious targeting of marlin and be towable to the faraway fishing grounds of Moçambique.

With their strong link to CMH as the Evinrude Agents in KwaZulu-Natal, AJ was able to gain access to a 24ft craft that was designed and built by Pitts Marine in Pietermaritzburg and launched onto the South African and overseas market in 2004 (see SKI-BOAT January/February 2005). Now renamed the Lightning Cat 24/7, not only will this craft complement the Superduck range, but with the cosmetic changes implemented by Superduck, she will also become a front-runner in this section of the South African offshore market.

These large style sportfishing cats hold great appeal for me. Not only do they provide extremely good fishing platforms for serious sportfishing, but they also go a long way towards providing the comforts of the traditional sportfisher. The Lightning Cat 24/7 is no exception.

It is probably the first few minutes after taking control of a craft that determines whether you’ll love or loathe the overall ride of the craft. As I opened the throttles of the twin Evinrude 150hp E-Tec motors and she got onto the plane, heading further across Durban’s beachfront with the wind and the sea on her starboard forward quarter, she felt good — very good. I knew I was going to enjoy this particular test.

To begin with, I watched AJ and SKI-BOAT’s Mark Wilson exiting Durban harbour while I was sedately ensconced on the big Thunder Cat skippered by Greg McEwen. From that position I was to photograph AJ doing what he loves best — extracting every ounce of speed and performance from Black Marlin III, as Patrick Labuschagne has named his new Lightning Cat.

During this period I had a lot of time to watch the craft’s hull on the water and marvelled at just how well she appeared to take on the sea off Durban. A light-to-moderate northeasterly had started blowing before we launched, and it was just starting to knock down the southwesterly sea that had pushed all night. The sea was not rough, but was full of holes, and the swells were still wrapping in from the southwest. 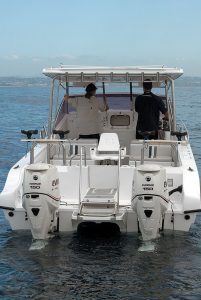 When the time came for me to take control of the Lightning Cat 24/7, I was mentally psyched up and ready to feel for myself what this craft could do with regard to performance and ride. My primary aim was to see whether my views from a distance tallied with how it felt to ride her on the ocean.

With AJ, Mark and Heinrich Kleyn aboard, I set a course from the inside of No 1 fishing ground towards Umhlanga Rocks, with the wind and sea on her starboard bow and the speed set at 20 knots on the GPS. After setting the lateral trim with a marginal trimming out of the starboard motor, I then played with the single button that trims both motors uniformly up and down as required. She sweetened out with a moderate — about a quarter — bow-up trim that allowed me to relax, take my hands off the wheel and set a 20 knot SOG northwards.

As I have tended to fish predominately on this size of craft over the last six to eight years, I know what to expect from them and I had a good comparison base on which to judge her performance.

At the outset I chose to run her without the clears she was supplied with, for the simple reason that with the large and substantial T-top — in her case virtually a cabin top — any hull-over-water irregularities would manifest themselves. If we pulled down the clears, any such problems might be masked.

In an ocean full of holes, I specifically concentrated on the way the port sponson handled the conditions. (See full details on trimming for this problem on page 62 of this issue.) Under what I believe was the correct trimming of the Lightning Cat 24/7, I never encountered any problem. I rode her not only with the weather on her starboard bow, but also in a head-on sea, full-beam sea and following sea.

The only time I had to drop speed a tad was when I turned her bow directly into the wind and sea. I tried adjusting her bow both up and down to find her most comfortable ride, and finally achieved this by dropping her speed by three knots and very slightly lowering her bow. A three-knot sacrifice in SOG is negligible in exchange for a comfortable ride for those aboard.

Yes, by really pushing up her speed to 30 knots I probably could have flown from crest to crest, but the crew would have been hanging on for dear life and would certainly not be enjoying the ride. I also feel for the craft, and speed is therefore of little importance to me, other than to know that in the bay she could achieve close to 35 knots at full throttle.

During trials with both a full-beam sea as well as running with the swell or having the sea on either of the aft quarters of the craft, she rides with her transom firmly ensconced in the water, thus holding her laterally very tightly. This tightness of her transom largely determines her stability through the vast majority of trials I put her through.

At trolling speeds of five to 7.5 knots, which is primarily what she is destined to spend most of her day at sea doing, she not only produces a nice flat, tight wake, but is also very comfortable for those aboard who will spend many hours watching a set of kona lures raking the ocean off Richards Bay.

Throughout these trolling trials I covered all points of the compass and never got the impression that she would throw spray, unless the sea and wind were really pumping. In those conditions, with her clears deployed, there is a large “cabin” area for the crew to seek shelter.

The first time I reviewed this craft it was in seriously big seas in Table Bay, and I found her performance in a really big following sea to be extremely good. So even if I didn’t have those sort of seas for the Durban review, I could call back the past and relate that experience to what I was experiencing during the review.

What really surprised me was her performance on one motor. With four people aboard and the starboard motor dragging I achieved 18/19 knots. With the starboard motor trimmed right up we peaked at just under 23 knots, and even though it was with a following sea, I admit to being very impressed.

When I played with her in the swells that were building up over the Kinmount Bank off Durban’s beachfront, I was not surprised that she handled simulated surf conditions so well. I found that she came about in a fast, tight turn, and came out of the hole and back onto the plane surprisingly quickly, ready to take on the following set of swells. This was especially true when swinging her to starboard. I would have no hesitation in taking this craft into big surf — such as off Sodwana or Shelly Beach. 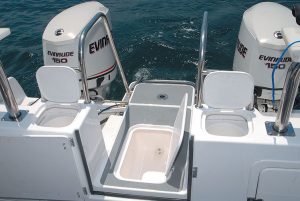 The twin 150hp Evinrude E-Tec motors with counter-rotating props which powered the Lightning Cat produced an impressive amount of bow-down torque that followed throughout the power range. For the review these motors were swinging 17-pitch props.

Trimming speed on the Evinrudes is relatively quick, so only short activation of the dual motor trimming button is needed to adjust the bow-up/down stance of this craft. She reacted remarkably well to this, considering the overall length and weight of the Lightning Cat 24/7.

The manufacturer — Dave Pitt — spent 15 months and a great deal of energy making this craft very user-friendly. As a result, much attention has been focused on the deck layout, as well as the creature comforts that are provided.

From the fisherman’s viewpoint, the large, open fish deck with high gunnels and a prominent transom make her very fishing-friendly, even for the very serious sportfisherman. The lightweight fighting chair fitted is well placed, with a more than adequate swing to facilitate fighting big fish with light- to medium-weight tackle. If the heavy-tackle boys used this craft, I feel a more substantial chair would be required. However, the boat has sufficient aft buoyancy and stability to work a big fish on heavy tackle.

The transom, apart from the necessary lockers, also incorporates a Luna-style bait tube on either side of the transom gate. A livebait well is situated under the transom access platform.

Fish hatches, or at least the size thereof, used to be a major factor in determining what boat one would buy. However, all that changed when more stringent restrictions were applied to the quantity of fish an angler was allowed to keep. The Lightning Cat has two below-deck fish hatches — not huge, but adequate for most recreational sportfishermen. She sports twin built-in fuel tanks, each holding 200 litres. 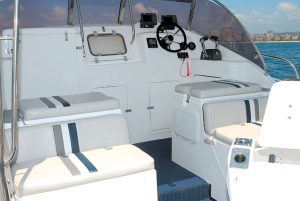 Under the hard top is the comfort zone where the skipper and crew can be comfortably seated (fore and aft) in the shade for those long hours spent trolling at sea. This “cabin” area is carpeted and has been raised above the fish deck. Because the area is raised, deck-wash is excluded and the carpeting will stay dry.

In the upfront design of the helm station and the area where the crew will congregate, a number of nice-to-have stowage cupboards should help keep the deck free of the fisherman’s clutter that’s invariably brought aboard.

Right upfront is a spacious cabin with a large bed and fresh air access through a roof-mounted, waterproof hatch. The porta-potty is also placed upfront; it’s neatly covered up, yet practical to get to when necessary.

With regard to fittings and finishes, not only are the internal mouldings well finished, but they’re also tastefully designed and, most importantly, are practical to use.

The helm station is extremely skipper-friendly. There is plenty of elbow room for the skipper to operate his craft, and he also has all the instrumentation and radios — VHF and ski-boat frequencies — within easy reach. He can do this in comfort too, as he has an upholstered backrest/support to sit on when the autopilot does its work while trolling, and to lean against when standing at the helm.

One specific aspect of this craft that needs mentioning is her finishing. Not only are the hull and top deck mouldings top-class, but they are also solid and neatly finished. This relates both to their inherent design as well as where hand finishing was required. The stainless-steel work was equally well constructed and installed, providing a very rigid support for the substantial T- top. 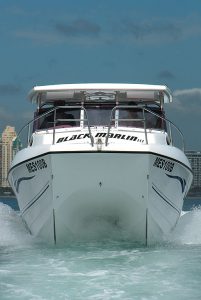 We launched this craft from a slipway into Durban harbour very easily from her double axle trailer. The trailer appeared to be solidly constructed and incorporated a few new (to me) design features. That just proves the ongoing quest for perfection that manufacturers of both craft and trailers are engaged in.

There is no denying that the Lightning Cat 24/7 is a big craft, yet she is still within the legal limits of trailability. AJ towed her from the Pietermaritzburg factory to Durban very easily with his Isuzu 2.8 litre diesel 4×4.

The Lightning Cat 24/7 is a craft that will be at home at any slip launch on the South African coast, and can be launched off the beach at places like Sodwana Bay and in Moçambique — just as easily as any other craft in her class.