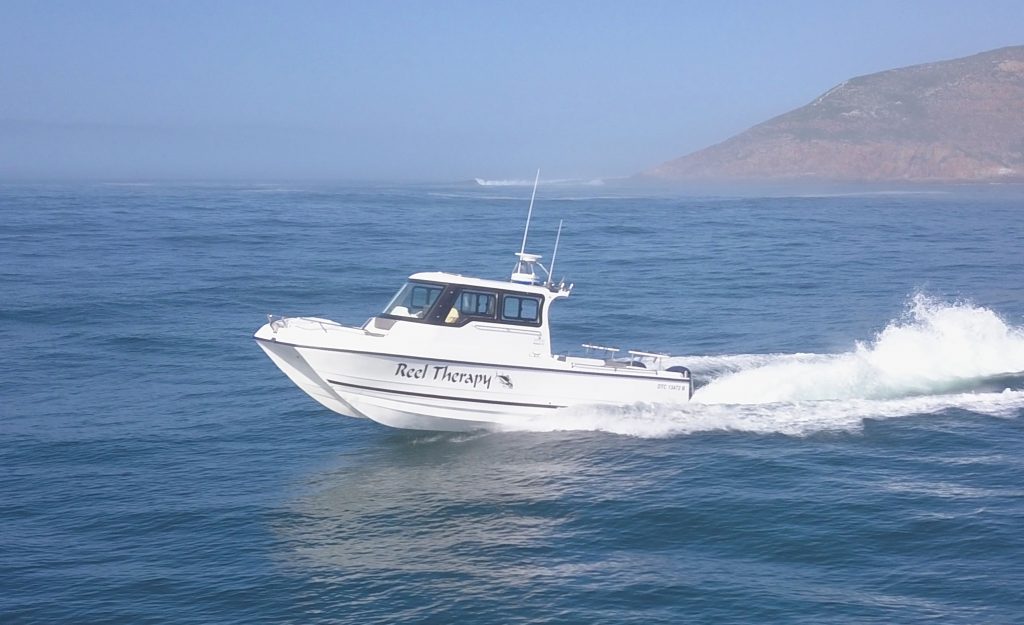 “WIDER, bigger, higher were the adjectives Mark Delany, MD of Two Oceans Marine, used when describing the first Magnum 32 I was to review back in early 2004.
This boat-building company, based in Cape Town and specialising in the upper end of the trailerable offshore power catamaran market, was then about to make the leap forward into bigger craft destined to be moored at various marinas in South Africa.
A length over the nine metre mark allowed Two Oceans Marine the scope to design and build a boat that was outboard powered yet had all the onboard facilities and comfort of sportfishers in that length category that were essentially all imported from abroad.
Awesome was the name of the first Magnum 32, and indeed she lived up to her name when I reviewed her out of Cape Town harbour in an area slightly protected from the gale force 32 knot wind blowing at the time.
I was blown away by Awesome in all senses of the word and time has proved the truth in my closing remarks of that review: “The Magnum 32 is not only a fine example of a craft designed by South Africans for South African conditions, but has also entrenched Two Oceans Marine as very competent boat builders capable of designing and manufacturing craft that are beyond the realms of what we in this country expect from ski-boats.”
In the 14 years since the Magnum 32 was launched, I would venture to say that the popularity this craft has achieved endorses the above statement. When one sees the extent to which Two Oceans Marine has extended its foray into the market of big offshore sportfishers and luxury yachts — up to 80ft — one can only be impressed. 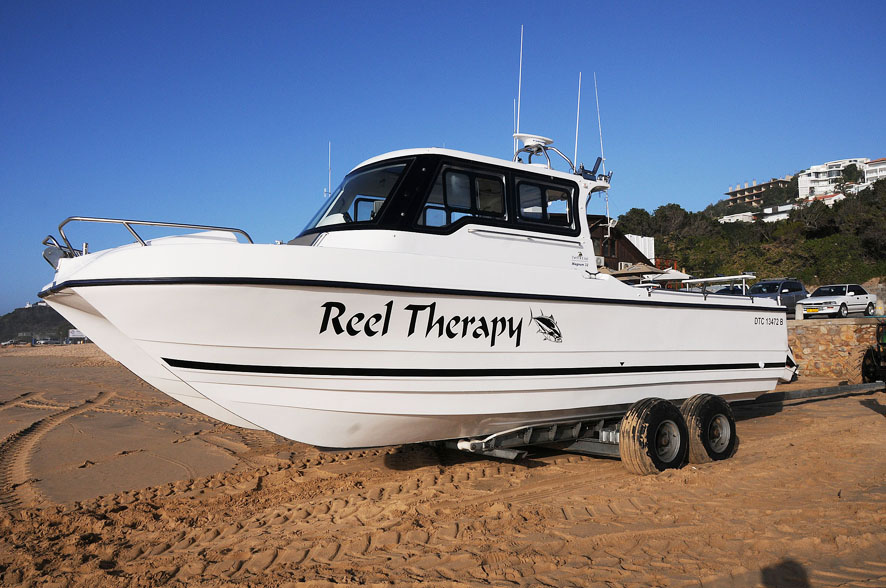 Mark subsequently advised me he was building a Magnum 32 that was intended to be road trailered and launched off the beach at Plettenberg Bay. He asked me to review the latest and arguably the finest Magnum 32 he had produced, and also experience the ease with which this craft is surf launched.
I thought back to the time when I’d watched a reasonable sized craft being pushed into the sea off the long, flat beach at Plettenberg Bay many, many years ago. “Interesting,” I thought, as I attempted to visualise how the exercise would be practically undertaken with such a large craft.
Knowing the owner and his ability to extend the bounds of normality, I followed the building of Reel Therapy — as well as the making of the road trailer and the launching dolly — from a distance but with great interest.
When I eventually arrived at Plettenberg Bay about 30 years after my last visit I was astounded not only by the change in the launching area, but also by how much shorter and steeper the beach was and the extent of the shorey that was bouncing at the time. “Interesting…” went through my mind again. I couldn’t wait for the following morning when I would finally come face to face with Reel Therapy on her dolly high up on the beach.
She is a truly stunning craft when her full lines and extent are on display rather than lying on moorings as had been the norm of the past. Sadly the time for adoration was cut short as I heard the order to board and a growling 4×4 tractor hitched to the end of the dolly’s long disselboom put paid to any further bonding time.
The launching procedure was as straight forward and easy as I had experienced so many times when launching nine metre craft at Sodwana Bay. Before I was finished trying to photograph the procedure we were out beyond the shallow water and the twin 300hp Yamaha 4-stroke outboard motors could be fully trimmed down, allowing Reel Therapy to come alive.
It was then that Mark ushered me to the helm station and into the “Captain’s Chair” to take the helm in the most inclusive and comfortable station I have ever experienced on a craft of this size. Following a quick rundown of do’s and don’ts Reel Therapy was mine to play with for a good few hours in the balmy sea conditions off Plettenberg Bay.
I say balmy because, unlike during the stormy weather of my previous review of the Magnum 32, the sea was flat, almost oily, with a small swell moving in from the south and wind hardly ruffling the water’s surface. Luckily the submerged reef structure off the eastern tip of Robberg Point provided a fair deal of broken water and upsurge in the swell conditions on the landward side of this area. The dam-like conditions of the open bay to the white water and swells near Robberg Point provided my playground to reacquaint myself with the Magnum 32.
In these flat conditions I was able to do what I construe as speed trials — not just how fast a craft can be pushed, but also how its hull adapts to increased throttle once it is firmly on the plane. Reel Therapy planed easily at 15 knots at 3 300 rpm but loved to run at 18/20 knots at 3 900 rpm, a speed that is optimum for most craft to provide a smooth, quiet and fuel efficient ride yet cover distance effectively. I didn’t open her right up, but attained close to 30 knots at 5 000 rpm. I was told that at full throttle she can achieve close to 36 knots, maxing out at 5 900 rpm using 15-inch saltwater Series II counter-rotating props.
I judge a craft’s ride, handling and comfort in the 19 to 22 knot range not only in relation to rpm, but more so in the power that’s available — the torque that’s available, if required, to pull the craft out of the hole in a big following sea to retain SOG and avoid suck back under such circumstances. Then, of course, I assess the craft’s ability to react to torque when launching, especially in surf conditions, and have in reserve sufficient power and ability to respond if and when circumstances change and power, and only power, can be one’s saviour.
Reel Therapy showed her pedigree under all the trials I was able to undertake in the calm conditions that prevailed off Plettenberg Bay. I even tried playing with surf manoeuvres in the broken water and marginally increased swell off the Point. After getting to know the power hydraulic steering system, I was 100% happy that she had at her disposal all the ability to take on whatever King Neptune threw at her.
To find out how the original Magnum 32 performed in extreme conditions read my full review on <www.anglerpublications.co.za/boat-tests/2018/04/magnum-32-by-two-oceans-marine/>. I went into a lot of detail in this regard in that review and have no doubt that Reel Therapy will achieve the same high levels of performance that I experienced in May 2004.
The adaptations required to suit the owner’s needs and especially the style and type of angling that is to be undertaken from Reel Therapy need to be highlighted, especially if one compares her to the original Magnum 32 of 2004.
If you’re mostly launching out of Plettenberg Bay, where bottom/reef fishing is prevalent, you need both an open fish deck as well as easy access to a bow area that will be utilised for anchoring but also, in the case of Reel Therapy, for light tackle fishing and pleasure boating. 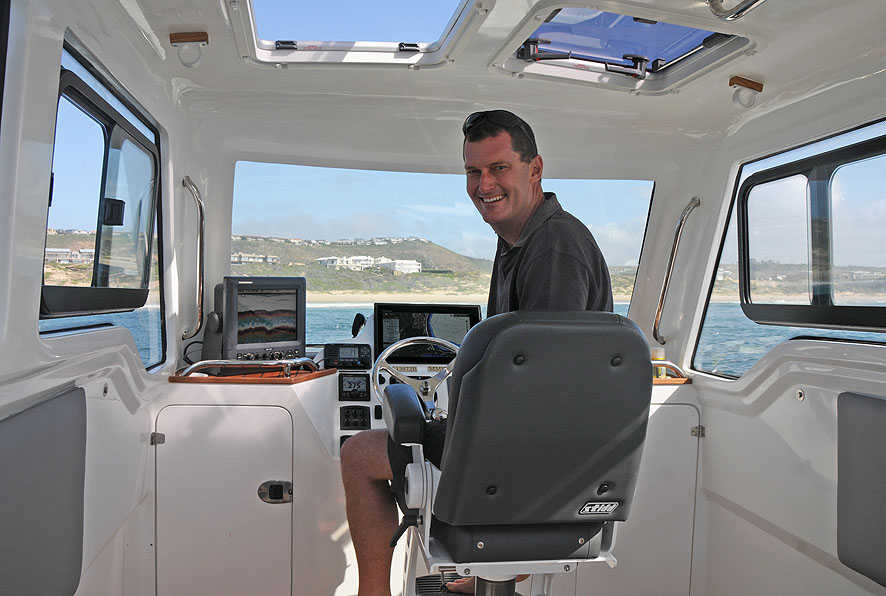 This all required the redesign of the wheelhouse/cabin area to ensure the walkaround would be practical and still provide comfort and protection for a crew of five to travel long distances in troubled waters.
The captain spoiled himself with a helm station chair that is as good as one can get; I have not experienced better even on some of the big sportfishers I have reviewed. Even though it takes up a fair amount of the upfront helm station area there is still ample space for a crew member to position himself on either side of “Le Capitaine” to enjoy a long ride upfront.
A full array of Furuno electronic equipment has been fitted. These were well placed visually and accessible for practical use during an outing to sea in any conditions.
In addition to being confused when first using the power assisted/hydraulic steering system (power steering as we know it in modern general motor vehicles), a lot of spinning of the wheel and delayed reaction had me puzzled until Mark explained its method of operation and how, under any circumstances, it is feather light. I got to really love it!
Upfront on the port side is a full flush toilet with a good deal of space even for a large-bodied crew member, and on the other side there’s a practical bunk and stowage area.
The open backed cabin area has been practically designed for both a fishing crew and joyriders.
Much thought has been given to internal finishes and moulding to avoid there being hard/sharp edges to knock against, and the windows and windscreens are large and made of special toughened, laminated marine glass. The other must for cabins is good ventilation especially if the craft is intended for tropical use, and Reel Therapy has plenty of that. 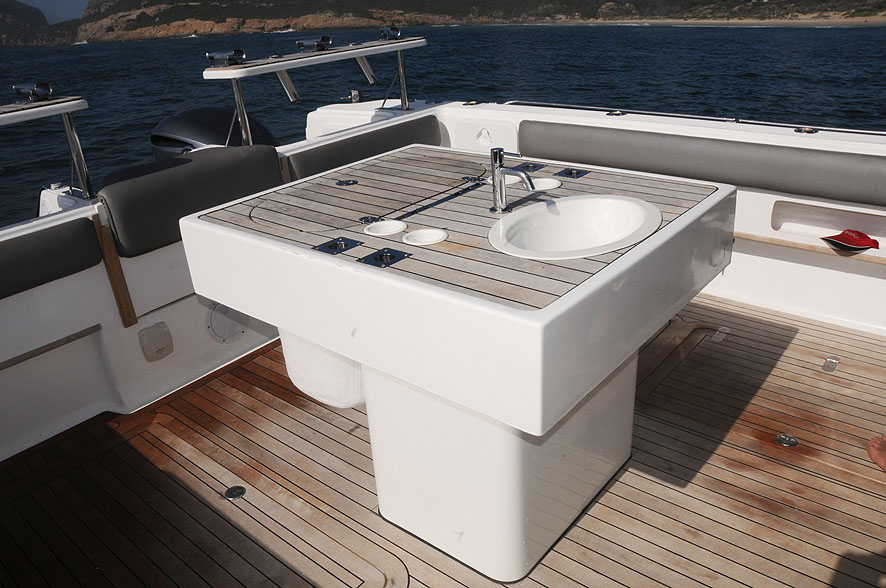 It is, however, the bait/work station centrally placed on the teak stripped deck that is the “piece de resistance” on board Reel Therapy. Study the accompanying photograph and note not only the aft bait-cooler-come-work-station, but also the freshwater wash-up basin and tap as well as the interesting lower styling that enables the person using this bait station to brace themself and get their knees under the outer lip to enhance stability in rough weather.
An inspection of the deck layout photograph shows not only the hatch configuration but also the surrounding upholstered gunnel cladding which provides maximum comfort for pleasure as well as fishing.
In the July/August 2018 issue of SKI-BOAT I showed a picture of Reel Therapy being launched on a special dolly trailer, a unique support system used by the boat operators of Plettenberg Bay.
Both this trailer and the road trailer that I saw are substantially made and the road trailer is fully compliant with road ordinances to allow this rig to be towed by a Unimog without requiring special permits. I have spoken to friends who have towed the Magnum 32 from Cape Town to Plettenberg Bay and they remarked how well these tows were undertaken.
These trailers, especially the road trailer, are engineering masterpieces, not only thoughtfully made, but also made strong with longevity and strength as the prime objectives.
The Magnum 32 is an absolutely superb craft built to extremely high standards, and carries the same top class pedigree of the Two Oceans craft based in South Africa, Seychelles and Angola as well as other overseas destinations. No doubt she will provide Mr K and his family and friends with decades of pleasure and the Reel Therapy they strive for.