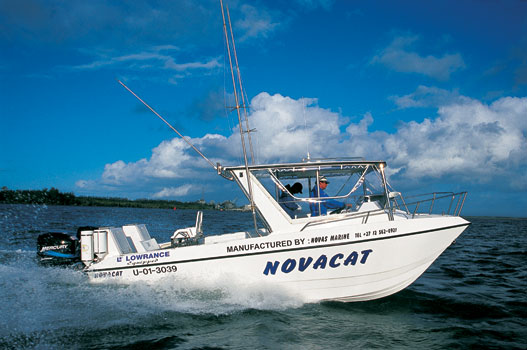 The Moçambique Archipelago makes very different demands on craft that are to be used for practical offshore fishing. This set of criteria is even more demanding if the craft is to be used for charters, with people paying good money to spend a day at sea — and expecting a great deal for their money.

It was this that Bou Raath, owner of Marlin Lodge on Benguerra Island, has had to come to grips with over the years since Marlin Lodge was completed in around 1998. He has tried everything, from 19ft boats to 40ft craft, outboard powered and shaft driven. Now he has adapted and redesigned various configurations primarily based on the Zimbabwe-designed Reef Runner, a craft he believes will satisfy the requirements of the most demanding anglers wanting charters from Marlin Lodge.
In brief, the craft had to be comfortable, offer protection from wind and spray, be high-speed, be able to pick up and drop off clients at the water’s edge, be large enough for clients as well as skipper and a crew member, be able to efficiently fish everything from small gamefish to mighty marlin and, finally, look good enough lying at moorings to tempt even a non-fisherman to charter for a day’s outing.

Bou has a simple way of dealing with things — if it’s not out there to buy, make it. He demands the best, so he set up a factory to produce the craft he believed would fulfil the majority of his demands. And so the Nova Cat was conceived.

During the last 18 months since the first Nova Cat was put on the water, 19 of these craft have been built, five of them — Marlin 1 to Marlin 5 — based at Marlin Lodge. The factory initially designed to build Nova Cats for Marlin Lodge has just grown and grown.

My first real exposure to the Nova Cat — other than in photographs — was in October 2002 when Anton le Roux and I were allocated Marlin 3 to fish Marlin Lodge’s inaugural Marlin Competition. My catch of a very big black marlin during that competition is well documented, but during the fighting and boating of that big fish (760 lb) I observed a number of things about this craft.

Some might think that because of my success on that outing I looked at the craft through rose coloured spectacles. You’ll have to make up your own mind in that respect. However, I certainly had good opportunity to evaluate certain aspects of the Nova Cat while fighting a big fish on heavy tackle and will discuss these further in this review.

During a recent business trip to Pretoria I managed to visit the Nova’s factory to see in detail how the Nova Cat 270 is built, as well as obtain a better understanding of what goes into them, prior to reviewing her on the water at Richards Bay. If one spends just a few minutes closely inspecting the many little as well as larger individual aspects that are involved in this craft’s manufacture and finish, one will get a good idea of the high standards Bou sets, especially in terms of attention to detail.
Finally a date was set and Marlin Lodge’s fishing manager, Captain Derek van Deventer, arrived at Richards Bay with the latest Nova Cat 270 that was en route to Durban for delivery to her new owner, Derrick Levy. I arrived at the Meerensee Ski-Boat Club after chasing a cold, wet front all the way up from Durban, or perhaps I should say it was pushing me, so severe was the south-westerly tailwind.

Also following me were some patches of clear sky, thus giving me some hope that the dense, black storm clouds that seemed to be hovering over Richards Bay would disappear.

By the time I arrived Derek had already taken the Nova Cat off her double-axled trailer on which she had made the journey from Pretoria. She was there in all her glory, drifting in the largely protected waters in front of the Meerensee Clubhouse.

Even if the clearing of the skies and sunshine did not reach Richards Bay, I could at least put the craft through her paces in the semi-protected water of the bay. All being well, the horrendous sea so visibly racing past the ends of the breakwater would be tackled when and if the port authorities permitted us to go to sea.

Luck was on our side as the sun made the odd appearance, which had us racing up and down the outskirts of the main channel, photographing the craft from every conceivable angle.

From the outset, both from a distance and from “feel” once aboard the craft, she gave the impression of having both the size and stability one would expect from a much bigger craft. On the other hand, she still displays the alacrity of a ski-boat. 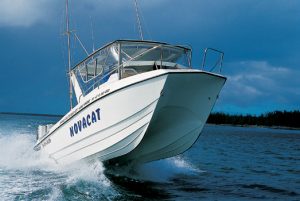 When I decided the time was right to tackle the big water, we zipped down the “clears” (see-through heavy-duty plastic screens) above the windscreen and on both sides of the cabin T-top structure, and — with four of us aboard — headed seaward.

During the morning the westerly wind gradually swung around to the south, but still kept up its momentum. The sea was, to put it mildly, horrific, and probably one of the worst I have ever attempted to review a boat in.

The Nova Cat 270 is a big boat and we were well protected from wind and spray, but an even bigger ship was entering the harbour, thus necessitating us taking a bearing into the north-east. With a big swell and heavy chop on our starboard aft beam, I gradually increased power until we were running surprisingly comfortably, parallel to the coast at speeds up to 18/20 knots.

It was a sustainable speed with only the occasional jar as we overshot a backless cresting wave. I was enjoying the ride, but was very aware that for every kilometre I ran northward I had to somehow bash my way back to Richards Bay with no sheltered area, like we experience off Durban.
When I was far enough out to sea, I trimmed her bow up marginally and swung in towards land to race the big swells that were directly behind the Nova Cat’s transom.  I must admit to feeling a little apprehensive on occasion as we raced down in front of some cresting brutes. In fact, I was so tense that I didn’t even look at the GPS to see what sort of speeds we were reaching. The craft handled this rollercoaster ride with aplomb and never gave the feeling that she wanted to yaw or broach.
Needless to say, I was relieved to bring her back around into a beam sea and slow down to a steady 12/14 knots.

Before attempting a run back to port I had to see how she would hold kona troll speeds, even though no-one in their right mind would troll for big fish in the size sea running that day. 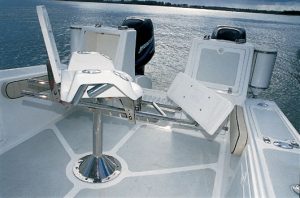 Setting the troll so that we were achieving an SOG of between 6 and 8 knots, I trolled the Nova Cat in a number of large figure-eight courses to ensure that I exposed her to an all-round bashing from the sea. She held a reasonably steady course and threw a good, narrow wake. I later tested this wake in flatter water and found that up to 6½ knots the wake stays nice and tight, only spreading when the speed was increased. Yes, lines run from her Schaefer outriggers will find lots of clear water to be trolled in.

At slow troll speed on one motor she made little progress, being directed by both wind and sea. It was an unfair trial, yet on the drift she really surprised me with her stability and the fact that she tends to lie side-on to the wind, not tending to drift stern-on as one would expect with her large enclosed “cabin”.

Then the ride home. It was always going to be rough, and I wasn’t disappointed. Between 8 and 10 knots running directly into the head sea, it was comfortable enough for us to have held course for hours on end. However, when I tried to increase speed she started to make heavy weather with the odd wave breaking over the bow and splashing over the cabin top. How I thanked Bou for the “clears” — they provided us with total protection. I did not like that increased speed, and neither did the crew, and I felt for the Nova Cat.

After a long pull I was able to veer more to the west to attack the sea at a greater angle which enabled us to virtually surf into Richards Bay harbour.

For a craft this size she turns rather easily and her out-the-hole acceleration is impressive, so I wouldn’t have second thoughts taking her out through the surf at venues such as Sodwana Bay. 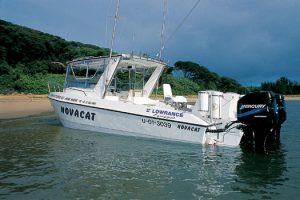 The Nova Cat I reviewed is powered by two 200hp Mercury OptiMax outboards which produced formidable torque for the Nova Cat 270. Her response to throttle was exhilarating. What’s more, the craft planed at 25 knots, with four aboard, on one motor (either one) with the other trimmed up — outstanding performance!

As I said at the beginning of the review, the Nova Cat was conceived with serious marlin fishing in mind. A substantial, and I mean substantial, fighting chair very securely mounted on the fighting deck is prominent, and the two Luna Tubes on either side of the aft moulded fibreglass stanchions add further to that design criteria, as does the marlin slipway that runs from between the motors between the stanchions onto the fishdeck. I know it works because we loaded my big fish in a little over five minutes. We got it into position under a slow troll with the sea, then stopped and she literally floated onto the deck.
It must be noted that the entire below-water level area of the craft is sealed and filled with the latest high-density closed-cell polyurethane foam.

There are no below-deck hatches, and the side hatches, fuel tanks (2×200 litre stainless-steel tanks) and fish hatches are moulded in GRP and fitted into the gunnel, with foam totally surrounding them. I therefore had no qualms about taking a good deal of water on the deck. The latest Nova Cat 270 has either a removable or fixed transom gate fitted between the stanchions, with a scupper system that stops water coming onto the deck while fishing.

The aft stanchions not only house batteries, stowage and bait makeup stations, but also provide rod holders for use while trolling for sportfish. I didn’t particularly like the concept at first until I had fished the craft in adverse conditions. Now I think the concept is really great as it gives one a sense of safety when working the back of the boat. What’s more, they didn’t get in the way when Marlin 3 fought two marlin and a big sailfish while I was aboard. 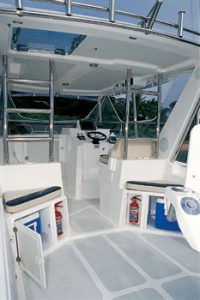 The cabin area is extremely practical and comfortable, not only for the skipper but also for anglers. Upholstered seating with protection from the sun, wind and spray is a luxury normally only available on bigger sportfishers. The two corner seats facing aft are truly great and I have spent many hours wedged into the corner watching marlin baits.
The helm position is well set out with full instrumentation easily visible. Other electronics and radios are housed overhead in the T-top.

From the non-slip deck finish to the hatches and stowage provided, the many good concepts and finishes have been extremely well thought through and are remarkably well finished.