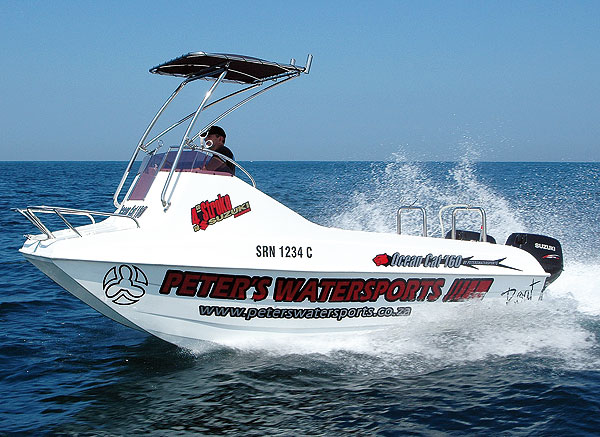 THE way our economy is going, and with the fuel price worse than the price of alcohol, we all have to tighten our belts and go smaller and lighter to save wherever possible.
The Ocean Cat 16 is ideal if you still want to get out to sea on a regular basis, but need a smaller craft that’s light on fuel.

FIRST IMPRESSIONS
I know this boat well because I’ve spent time on them before, but haven’t been on one for the last year or two. My impression was that this was the right craft if you needed to save money and save fuel. She looks neat, clean and tidy. She is also light in comparison to most boats in the marketplace, and that’s a huge plus when it comes to saving fuel.
Indeed, this is also the ideal starter boat for any angler with a tight budget. 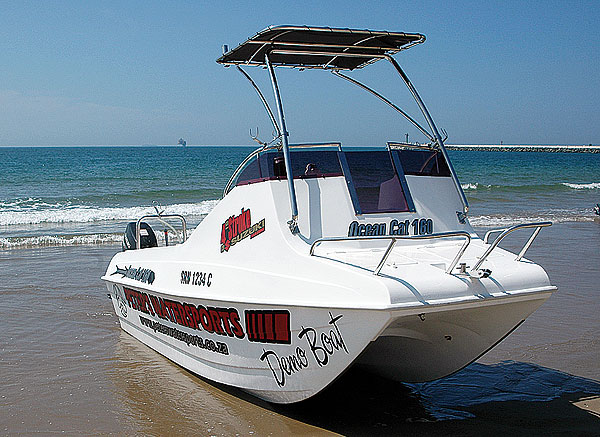 CONDITIONS
More ideal conditions for fishing you couldn’t ask for, but the same doesn’t hold true for testing a boat. You really have to push the boat to her limits to get her to perform out of the ordinary, as if in a rough sea. I’m sure I would’ve had bigger swells on the Vaal Dam, but because I’ve tested her before and have spent a lot of time fishing on this craft, I know pretty much how she performs under most conditions.

MOTORS AND CONTROLS
The Ocean Cat 16 I tested was fitted with new twin 40hp Suzuki two-stroke engines with sidemount cable controls. They sound just like two-strokes should sound — a little bit noisy for me, but that’s because I’ve been spoiled with four-strokes. However, they were very alive, which is what the two-stroke is known for. 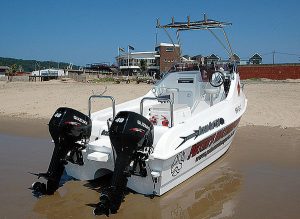 LAUNCHING AND TRAILERING
The Ocean Cat comes standard on a galvanised breakneck trailer, and because she is so light she tows very easily, both on the road and on the sand.
We used the tractor to drop her off in the water, and two of us turned her around with no major strain. When we came to loading her again after the test, we used only a hand winch and easily got her back up onto the trailer.

PERFORMANCE
Although I have seen the new Suzuki two-strokes before, I hadn’t yet had a chance to try them out. This was the ideal opportunity to put them through their paces.
What I like to do, especially when the sea is as calm as this, is to turn the engines fully either to starboard or port, and then push the throttles all the way forward. That normally gives me an indication of power, as well reveal any cavitation. It also shows whether she leans to one side or the other.
With this craft I had none of these problems. She was fully alive with the 40hp two-strokes and they were ideal for pulling away through the surf. I could not get her to cavitate to port or to starboard. The swell was too small to really test her for broaching, but based on previous outings, I can say you shouldn’t have any problems in this department.
The Ocean Cat runs with her bow quite high out of the water which prevents spray coming over the front. For her size she is very stable all over the deck area which makes it very easy to move around the deck when fishing, drifting or jigging.
She is fast out the hole and was on the plane in a flash. With her tight turning circle she would easily run away from the nasty little swells that stand up out of nowhere when you’re surf launching. As with any boat, if you know your craft and you show respect for the sea, you’ll be able to get out of the nasty situations that might crop up.
Her performance with the two Suzukis is very nippy. At a normal cruising speed of about 15 to 20 knots I could not get her hull to bang, and at normal trolling speeds she was quiet and very stable over the water. 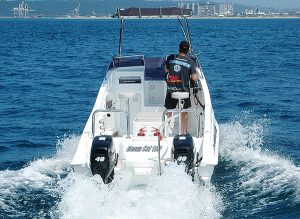 LAYOUT
The Ocean Cat is practical and pretty spacious for her size, and with the forward console, there’s ample deck space to move around. On the deck there’s a fuel hatch that carries 4 x 25 litre jerry cans and which serves as a seating area. There are also two swivel seats behind the console area. The gunnels on this new model are higher than before which means one is able to balance against them when fishing, and they help to keep the boat drier.
This new model also has fully-moulded fish hatches of a fair size, rod holders that are recessed into the gunnel panel, an integrated livebait well and battery hatches. The deck area is non-slip which also makes for easier cleaning at the end of the day. Upfront she has a stainless-steel T-top which can be folded down when travelling — ideal to keep most of the sun off your head and face.
The console area is uncluttered, with neatly fitted controls and ample cupboard space for stowage. The centre of the windscreen can be removed, allowing for simple access to the anchor hatches. Other features include a stainless-steel bow rail, as well as dual roll bars with rod holders.
With her spacious, practical layout and good handling capabilities in reasonable weather, these boats are well suited to both the weekend angler and the serious fisherman. With the wet deck design, the water level is lower than the deck area, allowing any excess water that may come onto the deck to run off at the stern. 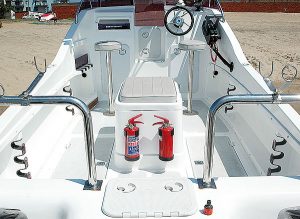 FINISH
From the layout to all the small fittings, the new Ocean Cat is nicely finished off with quality trimmings and striking lines, giving her a super modern look. Most of the Ocean Cat is white which certainly makes her stand out.

CONCLUSION
This is yet another small cat that is perfect as an entry-level fishing boat, or even for the serious angler who doesn’t want anything larger. What’s appealing about these boats is how simple they are to operate, handle and tow. With their general versatility you can comfortably and safely use them at sea or even on the dams and estuaries.
Indeed, if you are in the market for a craft of this size, this 16 footer is well worth having a look at and taking for a test drive. As I mentioned, with the way this craft has been fitted she’ll save you a fair amount of money — and she’s so light on fuel that you’ll be able to afford to go fishing.