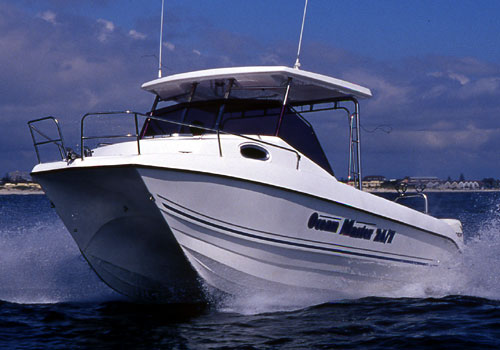 WELL WORTH THE WAIT

“I HAVE two new toys for you to play with,” said Ronnie Arenson, CEO of Waterworld. “Come to Cape Town just before the Cape Boat Show and the Ocean Master 24/7 and the Trophy 30 will be on the water.”

It was an offer too tempting to refuse, even though it was merely days before I was due to leave for a marlin fishing competition in Moçambique. Beside which, it would also provide me with the opportunity to have a brief preview of this widely acclaimed boat show.

The early colonists of the Cape did not call it the Cape of Storms for nothing. I seem to prove this point every time I visit the “fairest” Cape, and this time was no exception. Strong north-westerly winds and torrential rain greeted me as I disembarked at Cape Town International Airport, and it didn’t improve as we travelled to Cape Town’s Royal Cape Yacht Club. However, the weather forecaster had said it would clear by the afternoon, and for once he was right.

The delay in putting to sea had one advantage: it gave me a great opportunity to preview these two good-looking craft at Waterworld’s “on-water stand” at the show, and also visit the majority of the exhibition stands both in the large marquee as well as on the water.

More importantly, I had a lot of time to pay particular attention to the boats I was due to review. 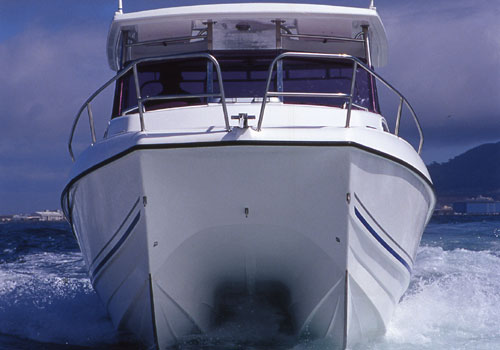 ean Master 24/7 was first introduced to the boating public at the National Boat Show at the Dome in Johannesburg in August 2004, and she certainly made a striking impression. However, apart from a cursory look at her, I admit at that time I did not absorb a great deal of what she had to offer. So for me the Ocean Master 24/7 was new, and new is always exciting — a virtual feast of discovery and a host of ideas and layout to absorb. 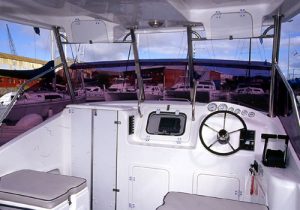 In reply to my query about why she’s called the Ocean Master 24/7, Ronnie explained that the boat is 24 feet 7 inches long, and by coincidence you can go fishing 24 hours a day seven days a week.

In my eyes she is a big craft, fitting somewhere between the big ski-boats and the sportfishers that are available on the South African market these days.

Ronnie has intimated that Waterworld needed a larger cat that was made locally to a standard that Waterworld would be happy to put their name to. They also wanted a craft that would complement their range of large imported boats.

After lunch the predicted sun began to shine through the clouds that were being driven to the east by a 15-20 knot north-westerly wind. It seemed this was as good as it was likely to get, so Willem Voerman, Waterworld’s General Manager, agreed to go to sea. No doubt, he was also happy to get a break from his hectic preparations of his company’s stands at the show.
Once we’d left the protection of Table Bay, the sea was decidedly cheeky. After two days of very strong northerly winds over a fair south-westerly swell, the churned up Table Bay was not a nice place to go boating. To make matters worse, the bay water had been coloured a horrible brown as a result of the rain.

To get to clean water, not littered with plastic and debris, we motored across the bay towards Bloubergstrand where, although sea conditions were no better, at least it was a better colour.

Watching the Ocean Master perform for the camera not only gave me a very clear indication of how she was riding that particular sea, but also the yen to get behind the wheel and feel her for myself.

This large style sportfishing cat has a great appeal to me. Not only do they provide extremely good fishing platforms for serious sportfishing, but they also go a long way towards providing the comforts of the traditional sportfisher. The Ocean Master 24/7 was no exception.

It is probably the first few minutes ging along the troll path. She also throws a reasonably tight wake pattern.

In developing the Ocean Master, Waterworld and the manufacturer — Dave Pitt — have spent 15 months and a great deal of energy in a bid to make this craft very user-friendly. In line with this aspect, much attention has been given to the deck layout, as well as to the creature comforts that are provided.
From the fisherman’s viewpoint, the large, open fish deck with high gunnels and prominent transom make her very fishing friendly, even for the very serious sportfisherman. The lightweight fighting chair fitted is well placed with a more than adequate swing to facilitate fighting big fish with light- to medium-weight tackle.

If the heavy-tackle boys used this craft, I feel a more substantial chair would be required. However, the boat has sufficient aft buoyancy and stability to work a big fish on heavy tackle. 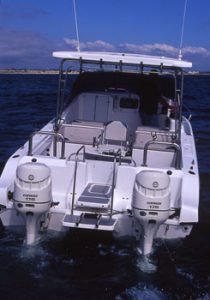 as a rather novel gunnel basin with plumbed water. The transom, apart from the necessary lockers, also incorporates a Luna-style bait tube on either side of the transom gate.

Fish hatches, or at least the size thereof, used to be a major factor in determining what boat one would buy. However, all that changed when more stringent restrictions were applied to the quantity of fish an angler was allowed to keep. The Ocean Master has two below-deck fish hatches, not huge, but adequate for most recreational sportfishermen. If a greater carrying capacity is required, the fighting chair could be replaced by an above-deck coffin-style hatch.

The two fuel hatches which are above deck are situated under the aft-facing upholstered bench seats. Each one houses 4×25 litre plastic fuel tanks. Not only is the installation neat and cleverly situated, but it’s also very practical when changing tanks.

Under the hard top is the comfort zone where the skipper and crew can be comfortably seated (fore and aft) in the shade, for those long hours while trolling at sea. This area has been raised above the fish deck by means of carpet-covered, high-density foam, making it soft underfoot and very comfortable.

Whilst clears have not yet been included on this craft, I can foresee the inclusion in the future to provide all-weather protection. Whilst she is a dry boat and has a high windscreen with wind deflectors, wind-driven rain and cold winds still become a discomfort factor which must be considered, a problem the clears will solve.

In the upfront design of the helm station and the area where the crew will congregate, a number of nice-to-have stowage cupboards should help keep the deck free of fisherman clutter that’s invariably brought aboard.

Right upfront is a spacious cabin with a large bed and fresh air access through a roof-mounted, waterproof hatch. By the way, the porta-potty is placed up front. It’s neatly covered up, yet practical to get to when necessary.

In fitting out the craft, not only are the internal mouldings well finished, but they’re also tastefully designed and, most importantly, are practical to use. 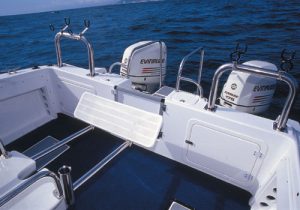 Ronnie opted for the latest generation Evinrude twin 175hp direct injection motors for this boat — understandable, considering he’s the Evinrude distributor in South Africa. I found these motors started very easily, were quiet and showed incredible out-of-the-hole thrust when throttles were pushed forward with speed. Apart from that, the power curve was evenly generated through the throttle range. The motors I tested were swinging 19-pitch standard props.

The steering, which incorporated twin hydraulic rams (one on each motor), provided for an extremely even and easy helm movement. It’s always nice for a skipper to have such a system, especially in tight manoeuvres. Throughout simulated surf exercises, this craft proved easily capable of handling these, the most demanding of boating activities the South African coast has to offer.

It took some time for the Ocean Master 24/7 to come through the design and mould-making stage, but I believe it has been time well spent as the final result was well worth the wait.

This is the first locally made big ski-boat Waterworld has put into the market, although in the past they have imported a number of big craft — in this class and bigger — many of which are the pride of South African boaters. With the Ocean Master, Waterworld’s experience and dynamic marketing will no doubt ensure this craft will become a respected offshore fishing/leisure craft in the future.