SOMETIMES one forgets where one started in offshore boating, and that the majority of the time one was out on a small Ski-Vee of some sort owned by a friend, or on one that you had scrimped and saved to buy. In contrast, most of the boat tests we do nowadays are on boats that are not exactly affordable to the average man in the street, and especially those starting out.

Yamaha recently examined the market, realised that there is still a demand for something small, practical and affordable, and came up with the new Explorer 465. Not only is this a new boat on the market, but she also comes in two models — dual or single installation — with one being a bit trendier in looks than the other.

I first heard of the 465 being developed a fair while ago, and a few months back I caught a quick glimpse of her up at Inanda Dam, just by chance. With similar lines to the larger Explorers, the 465 boasted equally good looks, and I knew that if she rode anything like the larger models, she was definitely going to be a winner in her class.

A quick glimpse was all I was allowed on that occasion before she was whisked away to receive some final touches before the test.

Being a wet-decked boat in a ski-vee-style, the test was really to see what the boat had to offer us offshore. Typical pre-winter conditions prevailed for the day, with a light offshore wind blowing, and close to perfect seas and sun.

Coming in at a length of 4.65m, the new 465s are relatively small and light-weight, and are thus easy to control when towing. Obviously, a 4×4 is necessary on beaches, but for general towing you could get away with a standard utility vehicle. The 465s come standard on galvanised breakneck trailers that worked well when offloading and re-loading the boat on the beach at Durban Ski-Boat Club. 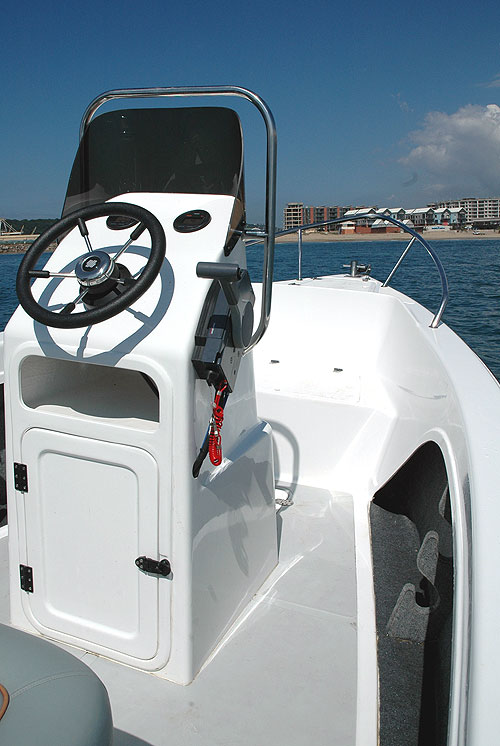 Both the 60hp motor and the 40s were trim-and-tilt models with 703 control boxes and standard cable steering systems. All the controls were neatly installed and were in a comfortable position to facilitate simple operation.

On the single installation, the 60hp Yamaha provided more than enough power to get the 465 out of the hole quickly and onto the plane, from stationary and in the full lock position, with minimal cavitation.

The 465 Explorer with the two 40hp Yamahas was even quicker off the mark and also had minimal cavitation from stationary and in full lock. Considering the excess power from the 40s, I would say that you could probably go down to a dual installation of 30hp motors and still have ample power available, or else pitch the props right up on the 40s.

On the plane both models rode exceptionally well for small monohulls. They produced a stable, dry, fairly soft ride in the calm conditions. One area that particularly caught my attention was the water deflection off the chines that created the dry ride. They have an interesting hull design that actually rolls the water downwards off the chines.

The only noticeable differences that I could find between the two boats’ rides were, firstly, the power, and — secondly — being able to set the trims on the dual installation to ride more level. The single installation seemed slightly softer on the ride both on and off the throttles at higher speeds, due to her having slightly less responsive power than the twin installation.

Speed-wise, in the calm water you can edge up to 30 or 35 knots, and offshore you can run between 12 and18 knots quite comfortably in calm conditions, which is more than enough on a small boat.

The ocean was calm for the test, so to judge the boats’ handling capabilities we went a fair distance offshore where the swell was slightly larger. Throughout a series of tests the 465s maintained consistently good rides. These small monohulls have a decent beam to them, with the hull being a deep-vee on the bow and flaring out fairly quickly towards the stern, thus providing good stability and a fast response to get on the plane.

With regard to surf launching, the 465 has a fairly high bow, and with her nippy performance I would say that surf launching in reasonable conditions would be quite simple.

The Explorer 465s have a fairly simple layout, but have everything necessary for general recreational boating and to suit the all-rounder fisherman. Both models we tested have a false transom section housing a boarding step, a small livebait well, a ski/fishing rollbar and battery hatches.

The single installation model had a non-slip deck area, an adjustable centre seat with plenty of space for stowage of gear, a fish hatch and a standup console fitted with windscreen and stainless-steel grab rails. The gunnels are fitted with flush panelling and rod racks, and are at a good height for angling. The bow section has a raised fore hatch/

seating area and a small anchor hatch, and is finished off with a wraparound stainless bowrail and bollard.

The dual installation boat is exactly the same as the single installation model, except that she has a more stylish console with integrated seating at the back and front. These different consoles and centre seat configurations are both offered as options to prospective buyers, and you can choose which layout best suits you.

In my opinion, the standup console is better suited to the serious fisherman, especially on the offshore side, as it creates more walkaround space. The designer console model with seating would probably better suit the general boater.

The 465 is a nice all rounder for fishing and especially for light offshore fishing. As previously mentioned, I preferred the standup console as there is far more open fishing space available.

Having a decent walkaround area the 465 would be comfortable for two to three anglers, and although it’s fairly simple in design it has enough fishing features to start, with the option of fitting add-ons to suit your particular fishing style.

In the calm conditions the stability was good for a monohull, both when stationary and on the move. At idle speeds and fast troll speeds she was simple to control and reponsive, and with the small motors with which she was fitted, I’m sure the economy would be good for a day’s outing. 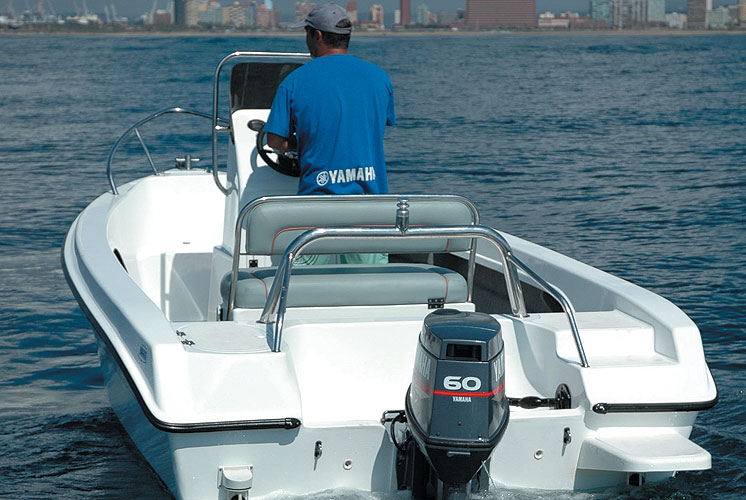 As with the majority of boats we test, it’s obvious that the manufacturers have worked hard to get good finishes on the new Explorer 465. These craft have super lines and a sharp, modern look to them, with a few added touches giving a nice overall finish.

If you need to upgrade your existing ski-vee-type boat or are looking for a small craft that’s not going to break the bank and can be operated by two people with ease, then these Explorers are definitely worth a look and test.

The wet deck ensures that the Explorer 465 is suitable for offshore fishing, and in fact she’s a super little boat for Moçambique as she’s so easy to tow. She’s also the type of craft that can be used for many other fishing applications, as well as general family watersports and entertainment.