THE last time I tested an Explorer 510 was in 2010 and that was after Grantly Read changed it to a centre console craft. Eight years later I was walking around at Natal Caravans and Marine in Pinetown looking for a caravan when I saw an interesting looking Explorer 510 standing on the showroom floor.

My first impression was that it’s different from many of the boats that have been on the market for a number of years now.

My wife and I were still staring at it when Bill Harrison came across to greet us. We had a short discussion about the Explorer and I suggested that Bill arrange for a boat test. The very next day he called to set a date, and a week later I met up with Bill and Geoff from Natal Caravans and Marine along with Erwin Bursik who was there to take the photos.

It’s always reassuring to work alongside Erwin because we have been doing boat tests together for such a long time that I can read his hand signals from a mile away.

When I arrived at the Natal Rod and Reel Club at 6am on the Wednesday morning the photo boat was already in the water as was the Explorer 510, with Geoff and his daughter behind the steering. 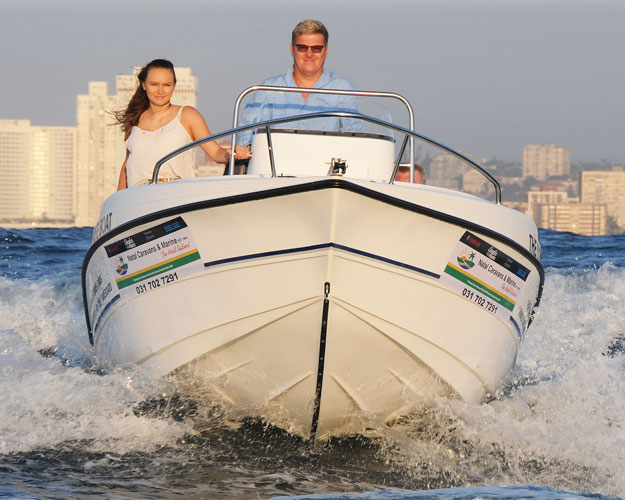 On this occasion we selected the test day specifically because we thought we would get a break in the weather and a little bit of sunshine, but that was not the case. At first I thought it was just the change in tides that was churning up the water at the harbour mouth, but we soon realised a fair to strong north-easterly wind was blowing. It felt like we were inside a washing machine, but the silver lining was that we could thoroughly test the boat’s performance in poor conditions. 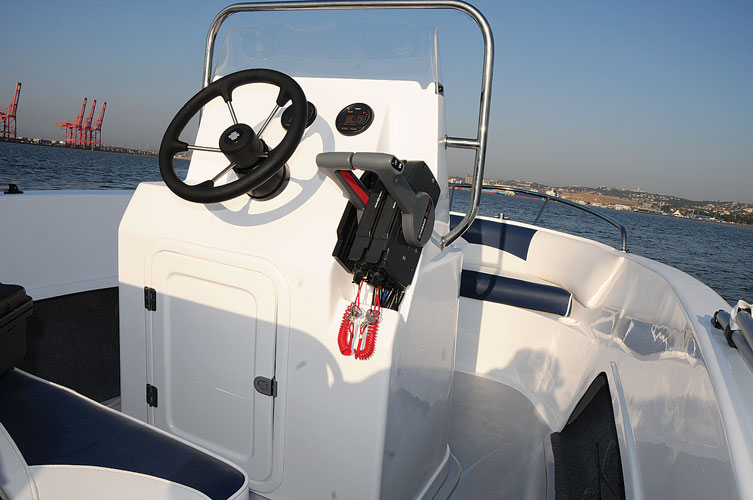 The test boat was fitted with 2 x 70hp two-stroke Yamaha engines. Personally I think it’s a little overpowered, but I prefer a boat to be overpowered rather than underpowered. The hydraulic steering between the engines makes it easy to steer and the side-mount cable controls worked well.

The difference between the Explorer that I tested in 2010 and this one is that the new model is slightly heavier and had two Yamahas fitted whereas the 2010 model was only fitted with a single engine.

The gunnels have been redesigned and raised to twice their original height at the back. The new boat looks very different from the older model and I found it to be much more comfortable. The higher gunnels are comfortable to lean against and if you want to sit on the side of the boat you barely have to bend your knees to sit or get up.

When it comes to performance the hull behaviour is more or less the same as the older model, but I would say that the new boat is drier at the back, largely because the higher gunnels at the transom prevent the spray and mist from coming over.

With the two 70hp two-stroke Yamahas on her stern she is very alive, from pull away from a dead standstill position to a sharp turn either left or right. With that amount of power it would be an absolute pleasure to do surf launching with her and she reacts very well when you have to turn between swells and pull away.

Considering the power on her stern one could expect some cavitation on the turns, but she handled it very well. We all experience cavitation sometimes, but when it happens you need to look at the circumstances and what caused the cavitation. In these rough conditions she handled the oncoming swells very well, although we obviously could not expect to race at full throttle into the swells.

Running with the swells was a different story. As she is a monohull, one would expect that she might broach, but that did not happen even when I ran her at full throttle. Here the big secret is your weight distribution. I made all three of my passengers sit at the back, and the Explorer 510 ran like a well-oiled machine.

When we ran side-on to the swell there was no indication of any broaching either. This truly is a very well balanced boat for deep sea fishing.

One would think that making the gunnels higher might affect the boat’s performance, but it did not. The boat did not become top heavy and, in my opinion, I would say that she rides smoother because of a little bit more weight at the back. She is certainly drier at the back than she was before. 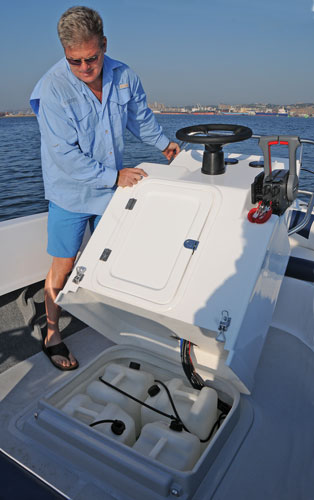 The Explorer’s layout is one of the things that attracted me to this boat in the first place.

As I already mentioned, the aft gunnels are higher than before and I really liked that. There is also a walkthrough on the right side of the boat between the gunnel and the transom. In the transom they have fitted a livebait well that can be used as either for that purpose or as a cooler box.

At the back, against the transom, they have fitted a luxurious seat that houses the two batteries with plenty more storage space underneath. In front of this seat they have fitted the spacious fish hatch in the deck. I’m sure that a nice 15- to 20kg ’cuda would fit in easily.

In the middle of the boat between the transom seat and the centre console there is a storage hatch. It has been cleverly designed with a seat on top, and the back rest can go either on the front of the seat or the back of the seat.

The centre console is very nicely designed and will easily accommodate all the electronics you need and the steering. You will be able to fit the life jackets, food and other items inside the console, and if you take the clips off the bottom of the console and swing the unit forward, you’ll find the petrol hatch hidden in the deck beneath the console.

This is great when it comes to weight distribution around the boat. With the fuel hidden away neatly in the centre of the boat, basically in line with the deck, it makes it easy to move other weight all over the boat to make sure it’s well balanced.

These are all things that need to be considered when you’re boating in rough sea conditions. The way you balance the boat will change depending on whether you have a following sea or an oncoming sea. This layout just makes it easier to adapt to your sea conditions if necessary.

Moving towards the bow, there’s a hatch in front of the centre console that could be used for a fish hatch. In the front there’s also a comfortable seat where a crew member can relax when conditions allow for it. Underneath that seat there’s still more storage space. In the bow you’ll find a spacious anchor hatch for your anchor and anchor rope.

In general this is a well thought out new design that Yamaha has come up with. These days there’s not much more that can be changed on our deep sea boats, so it all boils down to who puts in the extra effort to make small changes to their hulls to make the craft safer and more comfortable for us as fishermen. 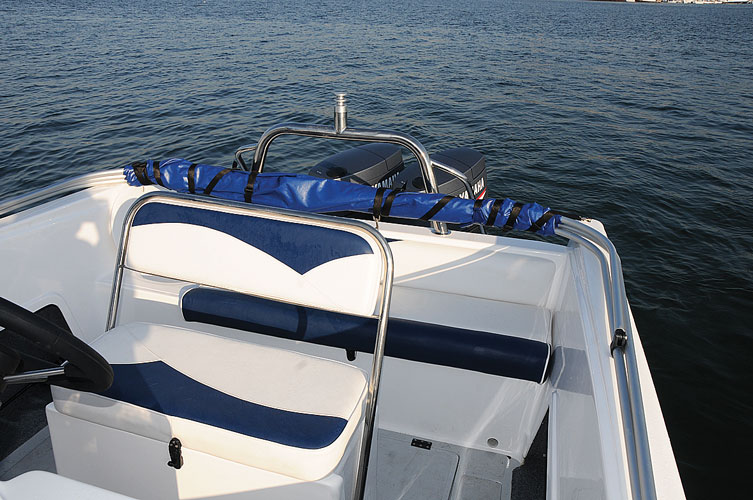 Once again Grant Read has come forward to make small changes to a boat that has been on the market for some time, but those tweaks are making a big difference. This is a true indication that Grant and Yamaha are prepared to go the extra mile for their clients.

As with all the boats designed by Grant, the quality is of the highest standard. This is one of the better entry level boats that I have seen in the market for a long time. Although she looks a little bit heavy and bulky she is not; in short, she provides a very comfortable, stable and dry ride. Well done to Grant and Yamaha.

For more details or to arrange a demo ride please contact Bill Harrison at Natal Caravans and Marine.