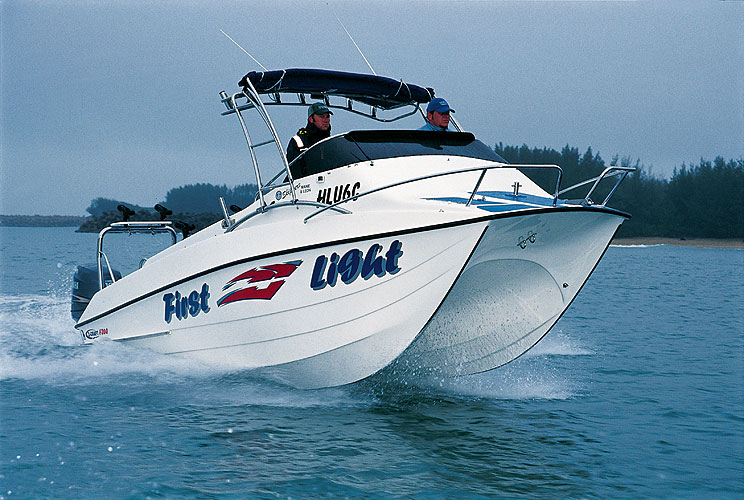 NEARLY a year ago I tested the F200 by Z-Craft. During the test it was very obvious that Peter Motzouris had every confidence in this boat. Unfortunately at that stage we could only run a two-page test on the F200 which in fact warranted a full test, and definitely deserved a good review at that.

Recently Pete requested another test on the F200 — this time a more comprehensive one — and we were happy to oblige. Structurally the F200 was exactly the same, with the only changes being that this craft has a more up-to-date design cosmetically, and has been customised to suit her owner’s preferences.

And so it was back to the bay to review another of Pete’s top class ski-boats.

When I tested the F200 last year, I felt that the boat had all the requirements — and more — to be a top class boat for her size. One often second guesses initial opinions, so I was more than happy to put the craft through its paces again. And after this second test, I am convinced that I was right the first time round — she’s a great boat.

GENERAL IMPRESSION
As I mentioned, this F200 was slightly different to the first one we tested, with this one being more spacious and having some fancy designs on her stainless-steel sides. When one views this boat on the trailer, she seems to be begging to be put into the water, and once in the water she looks even better than before. With such a proud bow and high gunnels, you get the impression that this boat will not have any issues with a grumpy ocean. The F200’s good looks immediately stand out, and when you view the boat up close, it’s also obvious that her beauty is more than skin deep — good quality workmanship has gone into manufacturing this craft.

CONDITIONS FOR TEST
The date had been set for the test, and come hell or high water we would be doing it, as deadlines were looming and I knew that Pete did not want to wait until the next issue. The weather was basically a carbon copy of the previous test, with a strong south-westerly blowing and — the worst part — rain! When doing a boat test, it’s generally better to do it in rough and windy conditions as you get to experience the true performance of the boat, but the rain and lack of bright light does make it difficult for the photographer.

LAUNCHING AND TRAILERING
In addition to Peter’s fancy boat designs, he also puts a lot of thought and design into his boats’ trailers. The F200’s trailer is perfectly suited to the boat’s size, and is fitted with quality attachments from the front to the back.

The tow hitch and braking system is very robust and high-tech, and could definitely handle long tows, poor quality roads (like in some of our neighbouring countries), bad beaches and being submerged when necessary. It’s galvanised, very sturdy and breakneck — what more could you need in a trailer.

As we launched from a slipway, the launching and trailering was obviously fast and simple, but I have no doubt that, with the aid of an electric winch, it would also be fairly simple to get the F200 on and off her trailer on the beach. 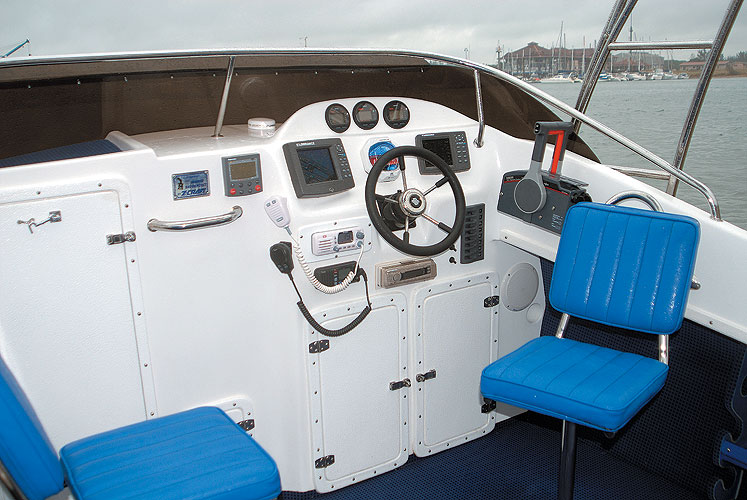 MOTORS AND CONTROLS
As tested, the F200 was fitted with twin Yamaha 100hp 4-strokes. In my opinion, these are the perfect motors for the F200. These motors have extremely good all round power from the bottom end to the top, and are also quiet and economical. Out of the hole the power was ample, as it was when cruising at high speed. Even at higher revs the noise level of the motors was exceptionally low. The steering system is hydraulic which is a must for this size craft, and control boxes were positioned perfectly to make skippering extremely comfortable
The 4-stroke Yamahas also run at quite low revs which is good news in the fuel economy department, especially when you having to troll for long periods. These characteristics will definitely keep you out fishing all day, without getting home feeling battered and bruised on the body and the pocket. 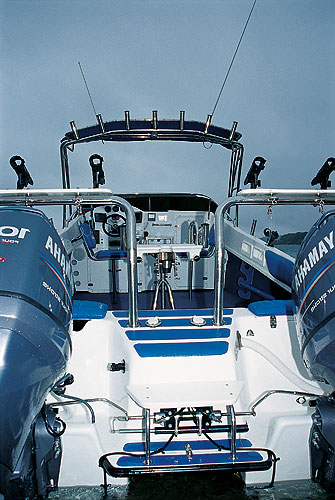 PERFORMANCE
Having already tested the handling capabilities of the F200, I thought that this would be a perfect opportunity to push the craft a bit harder than in the previous test to really get the most out of her.

With the power of the new Yamaha 100hp 4-strokes, this boat was really cheeky on the water and accelerating onto the plane was fast. I immediately noticed how responsive she was to the trims. With the trims set relatively high, she was pushed right out with the power from the motors and she felt good. In normal scenarios like this, boats often tend to wander quite quickly, but she didn’t. Just on the plane the motors purred at around 3 100 to 3 300rpm, sitting at a comfortable speed of 12-14 knots.

When I pushed the F200 into full lock turns to port and starboard to simulate surf launching, the turning circle was good and reasonably tight coming out of the hole. At the correct trim settings there was little or no cavitation experienced. These characteristics are extremely important when it comes to craft of this size that will be surf launched frequently.

Something that was noticeable was the consistency in the ride when coming down off the chop and swell. Often when bouncing or jumping off the top of swells, you generally get the odd spine crunchers, but on this craft, after travelling at a reasonable speed, there was no need to see the chiropractor once we got home.

Side-on in the wind and chop, she again rode very well, cutting through the swell and chop with ease, maintaining her stability and comfort levels throughout.
When running with the wind and swell, similar speeds could be achieved by tweaking the trims to raise the bow and sponsons to suit the chop and swell.

Throughout the test the wind spray was very little, considering the strong south-westerly that was blowing. The F200’s higher bow definitely helped to create a nice dry ride. Although the swell was not large, powering into and out of it was effortless, with no signs of her wanting to broach or plough.

Throughout the test of the F200, it was difficult to find any faults with the boat and its performance on the water. Personally, I would be feel very confident when surf launching the F200 in even the worst of conditions. 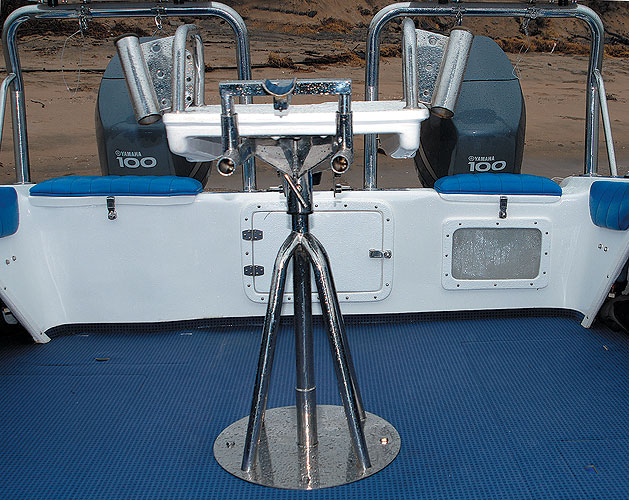 DECK LAYOUT
On this particular F200 the layout has been designed in such a way to create a large, uncluttered deck area. Although the transom area is compact, it still houses step-ups, a decent sized livebait well and flush-mount Luna tubes. The gunnels are high, providing plenty of space for rod racks, as well as being ideal for leaning against — particularly in the areas where they have been padded.

The petrol hatches, pump hatches and nice-sized fish hatches are all flush-mounted, and the deck is finished off with Flotex carpeting for extra comfort.

The forward console area of the F200 has a simple and practical design, featuring swivel stools, plenty of cupboards and dry storage hatch space. There’s a full windscreen, which adds to the already well protected skippering area, making this area nice and dry. Along with having heaps of space on the console for fittings, the main hatch area is really large and can be used for stowage of all gear. The bow has dual rope and anchor hatches and, like the rest of the boat, is trimmed off with quality stainless fittings from the grab rails to the T-top.

FISHABILITY
As previously mentioned, this boat suits the more serious deep sea angler. She has it all — decent-sized cupboards and hatches to store plenty of tackle, more that enough rod rack space in the gunnels, a T-top with rod mounts, livebait well, Luna tubes, outrigger fittings, fighting chair, dual roll bars for rod holders and, with all of this, she still has a spacious, open deck area.

In addition to her good high-speed handling capabilities, the F200 is also very stable while on the drift. With the more pronounced bow, the influence of the wind was felt slightly more than usual while drifting, causing the drift speed to be slightly faster than it might be on other boats in the same situation, but still suitable for drift baiting.

Holding the boat at a slow troll speed into the swell and chop, I found it easy to hold her steady and constant, with just slight corrections on the wheel necessary when running side-on. Running with the swell and chop, the F200 was stable, and again only slight adjustments were necessary on the controls to maintain the constant speed.

Pushing the troll speed up to around 8-10 knots, once again she was stable at all angles, and it only took minor adjustments on the wheel and controls to maintain a constant speed. These good handling capabilities are imperative, especially if you spend the majority of your time at sea trolling.

From a fishing perspective, the F200 is still a manageable size, but gives the same comfort levels found on craft a lot larger than her.

FINISH
From the trailer through to the smallest fittings on the F200, Z-Craft have ensured every part is sturdy but classy, presenting a craft that is well finished off in all areas.

CONCLUSION
The F200 has been designed for the serious angler who is looking for a boat that has high performance levels, and is also comfortable and spacious. Even with her size, the F200 can be hitched up and towed to destinations like Moçambique without the need of an oversized vehicle.
With all of these features and her professional finish, Z-Craft have created in the F200 a quite remarkable ski-boat that anyone would be proud to own or crew on. 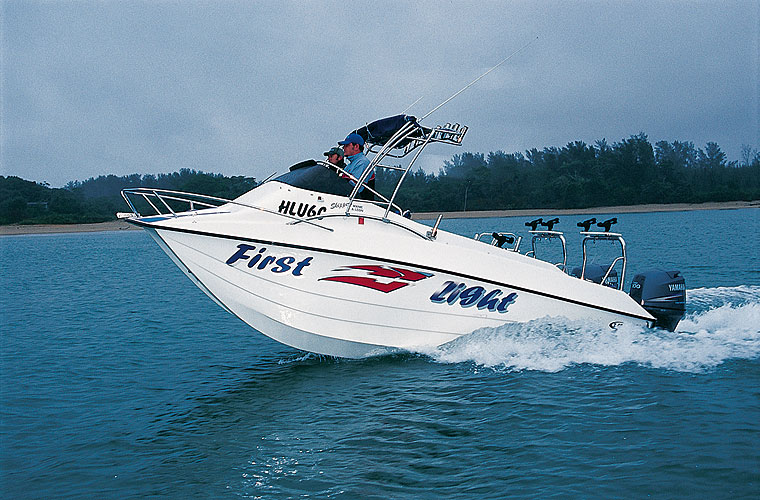