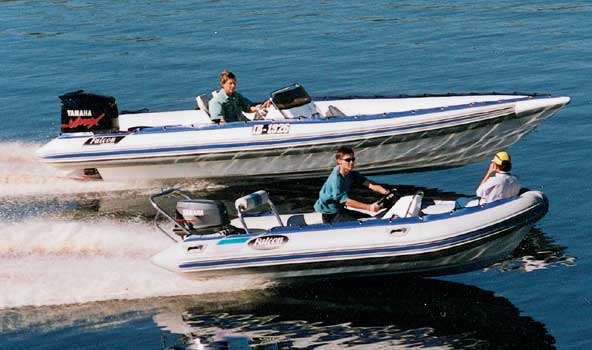 I have been following the development of this craft for some time now and it was good to finally climb into the cockpit and take her through her paces. The boat I tested was a prototype, test and demo boat, so I had to go to Waterfront Marine a few weeks later to get photographs of a production model which impressed me very much indeed.

Before we get onto the water, let’s visit the factory and have a look at the boat from the bottom up. When I visited there was a boat in the mould so I could get a good look at the lay up and the chassis before it all came together.

The craft has three strakes per side — the one nearest the keel is 70mm wide and the next two are each 35mm wide. Next up is the chine, which is 90mm wide with a slight reverse on it, so there’s lots of lift on the hull and it is very efficient. She is a deep vee with a 21,5° angle at the transom and 36° at the bow entry. The transom rake is 16°.

The transom is a beefy construction with two 18mm knees spaced 36cm apart. These are then bolted and glassed onto the top-hat style ladder chassis.

Below the chassis is the keel, constructed of 12mm marine ply, reinforced so that a stainless steel keel strip can be fitted to the hull if the owners plan to launch it from the beach on a regular basis.

In order to reinforce the planing surfaces the manufacturers have made use of a complex sandwich construction. Each strake is filled with balsa core, then there is an open area so that the glass laminate can make contact, and this is then followed by a layer of balsa core on the planing surface, and so it goes on up the hull.

Once all this is in place, the still green chassis is glassed into place. At this point all the glass components are still green so that they can cure together, thus eliminating stress areas.
All the conduiting and drainpipes are put into place before the chassis is fitted, as this helps to speed up installation time at the dealer.

The deck is reinforced with 12mm marine ply in strategic areas and this construction is then fitted to the chassis and hull. The GRP unit is now almost complete, and is left for about five to seven days to gently cure. Swellendam, with its mild climate, is ideal for building boats and no temperature control is needed in the factory. 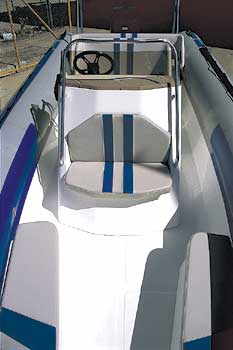 Above board, the tubes do not run around the bow but end in a fibreglass capsule. I personally like the idea because the bow tubes are really superfluous and usually create a great deal of lift, which is not always welcome. Another bonus — particularly if you’re slightly “height challenged” — is that with the tubes in this configuration you don’t have to stand up to see over the bow.
From the photo, readers will also notice that the tubes are higher than normal. With the deep vee the tubes do, however, tend to lift the boat when cornering and drag in the water. The important thing, however, is that they are in the water at rest and that is when they are needed.
Falcon is, of course, also concerned with their clients’ comfort and they have found a new upholstery fabric for the seats. It is supple, not shiny and has more of a leathery look about it. They use two foams to give the seats a firm but comfortable progressive cushioning. To make sure the foam doesn’t get wet, it is enclosed in plastic and all the joints are glued and stitched for extra waterproofing.

Falcon have also changed the design on the tubes and upholstery, which is very pleasing to the eye. I also noticed that some of the export boats destined for Europe, used the colours of the various countries’ flags in the graphics.

With the Falcon 700RSR, there are various deck layouts you can choose from to suit your specific needs. The Falcon I photographed at Waterfront Marine had a good general deck layout that would suit most owners.

There is ample storage space under the transom for batteries, bilge pumps, oil tanks and other items you might wish to store on a permanent basis. Access to the area is via a door in the transom area.

A transom bench seat has been created to fit behind the driver’s bench seat, and the driver’s seat — for two — is very comfortable, if not romantic. The built-in 80 litre fuel tank is under this seat and there is more storage space above the tank. The new wide, sit-down console is comfortable, practical and has loads of storage areas with plenty of space for instruments and navigation wizardry.

There is also a seat in front of the console with more storage for odds and ends. If you like you can also have bow-rider seats in addition to the anchor hatch with a padded cushion which is situated way up in the bow. A drained fish hatch is another of the many optional extras available.
As far as I’m concerned, Falcon must have the best test facilities in the country, with a private dam close by as well as the Breede River which offers some amazing rapids for testing riverboats and magic scenery for a cruise below the rapids. Then there is the rather dangerous Breede River mouth at Witsand and some really wild sea conditions beyond. 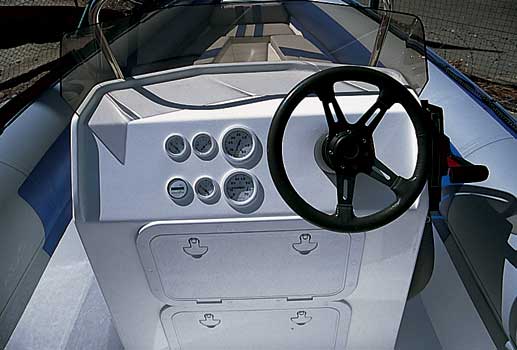 So, now we get to the practical side of testing the boat’s performance … The hydraulic steering system was a great plus and made the boat a pleasure to drive. While the craft I tested had a Yamaha 200 VMax on the transom, Falcon are not suggesting that you need to have one on yours. The fact of the matter is that Falcon Inflatables had the engine in stock and decided to try it on the demo boat.

And indeed, the boat does go very well with this as the power unit, but I was not stupid enough to try to drive the boat to full throttle — I just put on enough power to suit my needs. Italian sports cars are also fitted with massive engines, but one wouldn’t push them to their limits on public roads, and certainly not without loads of experience and practice at the wheel in controlled conditions. By the same token, it’s a great thrill to drive a boat with lots of power, but one shouldn’t go overboard.

But, all that aside, Marius Heyneman, owner of Falcon Inflatables, says that the boat is at its best fitted with a 130hp motor. She is also quite at home with a 90hp engine, but you shouldn’t fit her with anything more than a 150. You will be amazed at how well she pulls a water-skier when fitted with a 130hp motor, and she is a grand boat for cruising up a river or around a bay.
If you prefer, you can fit two engines — the minimum being a pair of 70s and the maximum a pair of 90hp motors. The engines can be mounted higher than normal — 25 to 50mm above the bottom of the hull — due to the steep 16° angle of the transom.

As I said before, the hull is very efficient and planes at very low speed. She also gets on the plane with amazing ease at a very low throttle setting, despite the weight of the big engine on the transom.

The craft also tracks very well; this is due to the engine being offset on the transom to accommodate the effect of the prop torque. The ride was very smooth and comfortable. There really is very little as satisfying as driving a long, relatively narrow boat — it’s almost akin to driving a 23ft Cadillac. 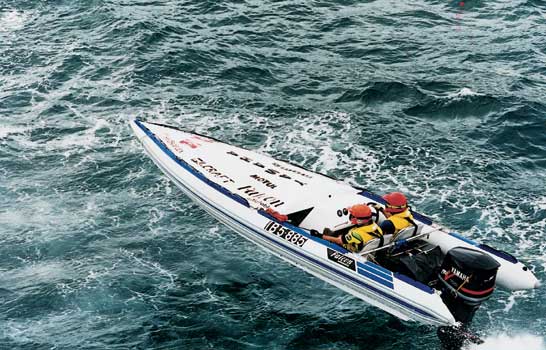 The Falcon 700RSR is ideal for a number of uses, and this shows in the variety of people who have bought this model. These include a family that is passionate about diving; a group of anglers who enjoy some game fishing but also want to enjoy getting there and back; as well as a family which enjoys water-skiing, generally exploring our country’s coastline and, believe it or not, bird-watching.

The craft has also done very well as a racing boat at various long distance races, being driven by ace Formula Three and offshore racing pilot Gil Fernandes of Gilcraft Marine in Pietermaritzburg.
So, if it’s an efficient boat that has lots of character, pedigree, space and speed that you’re looking for, this may be the one for you.

As is the norm at Falcon Inflatables there is continuous development at the factory, so do keep an eye on their website . For those readers who live further up country, Falcon Inflatables are also available from Pretoria Yamaha, Falcon’s newest dealer.
Lastly, a big thank you to Brian Gardener of Waterfront Marine for getting the boat ready and positioned for the photographs.