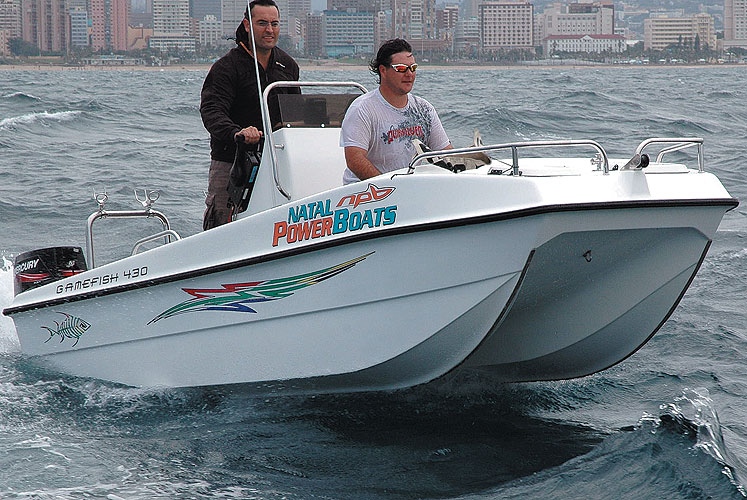 MMMM — she’s quite small, was my first thought when I saw the all-new Gamefish 430. I hadn’t been on such a small boat in ages, and even my paddleski is longer than her. But this is what I get paid to do, so I was determined to test the boat thoroughly.

GENERAL IMPRESSIONS
I still wasn’t sure what I was letting myself in for, because — to be honest — I far prefer bigger boats to small ones. All the same, she was waiting for me, so there was no delaying. When I first saw the Gamefish 430 at the Rod & Reel Club in Durban Bay I was very impressed by the way she had come out after the finishing touches had been added. Indeed, as is often the case, she even seemed bigger than she really was.

CONDITIONS
Conditions at sea were not great. It was a proper hot, humid, overcast summer’s day off Durban. A southwesterly had been blowing over the previous couple of days, and then turned to the northeast which turned the sea upside down. There was white water all over in every direction, ensuring that the little Gamefish 430 got properly tested. 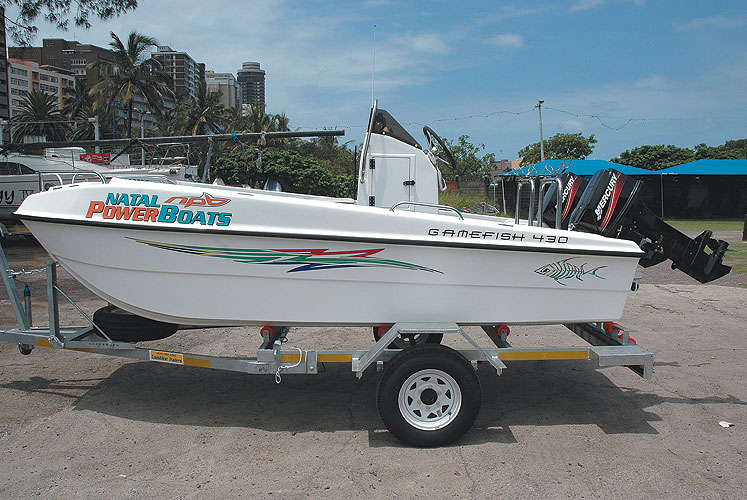 TRAILERING AND LAUNCHING
The Gamefish 430 arrived on a galvanised breakneck trailer that towed very easily. Because of the size and the height, the rig doesn’t catch a lot of wind so it remains stable, even when pulled by a light vehicle.

The boat was reversed on to the slipway, and when the boat fasteners were released she slid off very easily. Loading her again after the test also went smoothly as she was winched up onto the trailer. Her minimal weight, along with the guides and rollers helped keep the boat straight while being loaded. 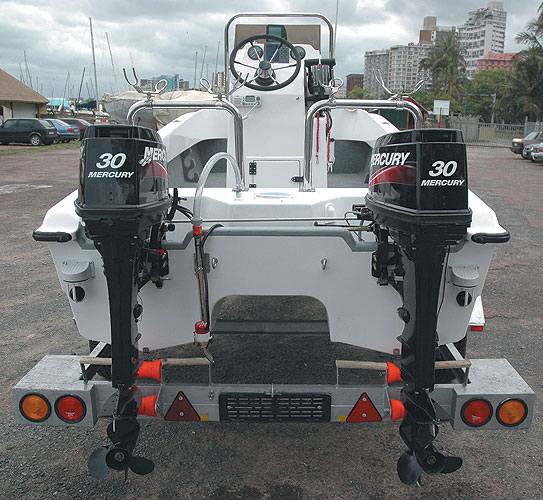 MOTORS AND CONTROLS
The boat I tested was fitted with two 30hp two-cylinder two-stroke Mercury motors. The sidemount controls were very smooth for cable controls, and it was easy to get it into and out of gear without that gear-grinding sound. This nifty little boat could be fitted with motors ranging from 25hp two- or four-strokes right up to 40hp motors.

PERFORMANCE
The reaction I got from the two 30hp Mercury motors on the back was typical of two-strokes. The minute I opened the throttle the power was there, and even with four of us aboard she got on to the plane within four seconds. I really was very impressed by the amount of power these 30hp motors kicked out.

Despite her obvious capabilities, I was still a little nervous to go out to sea in these conditions, especially as it was not my boat and was brand new. As it turned out, my fears were completely unfounded. To my surprise the Gamefish 430 was very stable, especially for her size.

Yes, we did get wet as a result of some spray from the sides, but that is what one expects from a small boat like this in these sea conditions. Even on the bigger photography boat we still got wet in those conditions.

The 430 jumped out the hole so fast with two of us on board that I had to tap down to avoid becoming airborne in those conditions. Into the swell she handled very well and I did not get any water over the nose at all.

On the turns in those conditions I could not fault this hull at all. Not at once did I feel unsafe, that we were going to fall over or that it was digging in, and neither did I experience any broaching when we had a following sea behind us.

Even without power-steering the turns were swift and easy, and she could make a sharp turn easily. The top speed we got to on flat water with four of us on board was around the 45km/h.

I think the 30hp motors are well matched to this hull. This little cat could certainly be launched through the surf without any worries that you would have insufficient power to get to the backline safely. 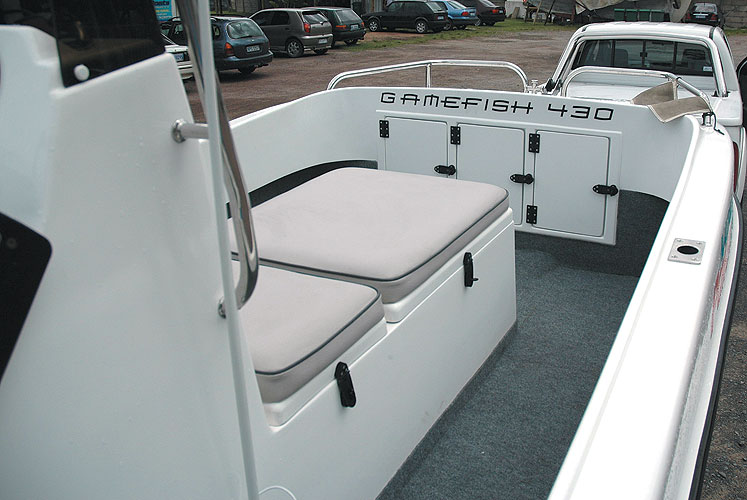 LAYOUT
The Gamefish 430 has a centre console with storage compartments below the steering and on the sides of the console. The petrol hatches and fish hatches are situated in front of the console. She has three storage hatches in the front for safety equipment and other tackle, as well as hatches for the anchor and anchor ropes.

The fishfinder, radios and gauges are all flush-mounted on the console, and rod holders are recessed into the gunnels. This specific boat was carpeted throughout which gives her a neat and tidy look. She also has a false transom, incorporating a livewell, to prevent water getting onto the deck.

Having the centre console set so far back makes it easy for the skipper to access the fishing rods when trolling, while still having control over the boat.

FISHABILITY
Considering the good handling and stability of this boat, she would be suitable for a wide variety of fishing applications. Although the Gamefish 430 would be licensed to carry four people, she is ideal for two.

She has more than proved her ability offshore, but would also make a very good freshwater craft. This little boat would also be good for flyfishing as there is a great deal of open space around the deck. The gunnels are high enough to be able to walk around if you want to spin or do vertical jigging and dropshot fishing. She is the ideal small all-rounder. 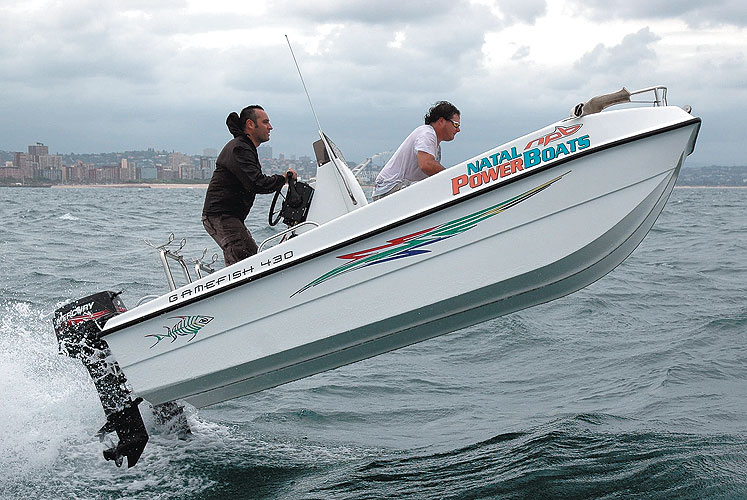 FINISH & CONCLUSION
I first saw the hull of the Gamefish 430 the day it arrived at Natal Power Boats before it had been finished off, and unfortunately I was not very impressed with the finish. I told Ruli Sofilas, one of the partners, that they could improve a lot on the final product to make her look more presentable.

Well, they have finished her off beautifully with stainless railings and clips on the doors, and by just cleaning and polishing her. The decals by signage company The Galloping Naartjie complete the transformation. The whole boat looked totally different and very much neater when I next saw her on the day of the test, and I was hugely impressed.

This is currently the smallest cat in her class and is perfectly suited for people who want a small boat but don’t want a monohull.

This is also the type of boat that could easily be towed to Moçambique for an amazing holiday. For her price, she is well worth looking at.