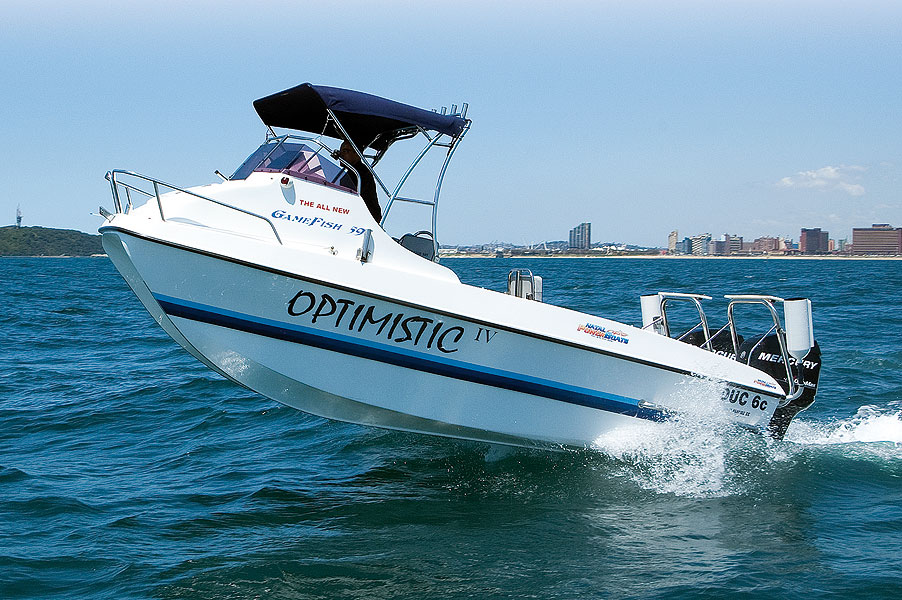 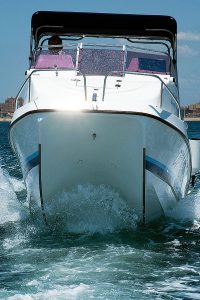 I HAD heard a great deal about the Gamefish 595 — the new boat that Nick Lanzanakis and his team had put on the market — but I had to wait until mid-November to test her because Nick had taken her to Moçambique for a test run. On his return he could not stop telling me how great this boat was, and finally Ruli Sofilas and I set a date to take her out on the water.
Before the test I went past Natal Power Boats to have a look at the new Gamefish 595 standing in the yard, then on the test day drove behind them when they towed her to the harbour where we would let her slip off the trailer and put her through her paces.

FIRST IMPRESSIONS
At first glance I thought the front of the boat was too small, but that was only until I jumped on board and I saw how much space she actually had in the bow, with a great deal of fishing space at the stern.
This boat has lovely rounded curves all over that give her a modern look.

TRAILERING AND LAUNCHING
I drove behind Ruli while he towed the Gamefish 595 through the heavy traffic, and was impressed at how easily she handled. Ruli got to the harbour without any trouble at all and I jumped aboard while he reversed the Gamefish into the water.
He untied the boat and with a slight touch of his car brakes she slid off her galvanised breakneck trailer.
After the test it was just as easy to load her back on to the trailer: Ruli pushed the trailer into the water and I simply drove the boat on to it. 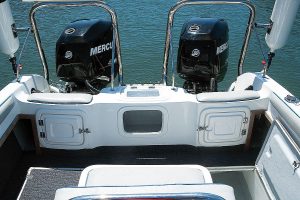 MOTORS AND CONTROLS
I had one look at the engines that she was fitted with and I knew this boat would fly. The test boat had twin 115hp Mercury Optimax motors which I actually thought might be a little too much power for this craft. She was fitted with normal sidemount cable controls, and at the back she had hydraulic steering — necessary on motors of this size — which was very smooth when running.
Her controls were obviously mounted correctly, because when I pushed her into gear and back to neutral, there was no grinding of gears.
The 595 could easily run on twin 90hp motors, so it’s purely personal preference as to how much power you want pushing this boat. 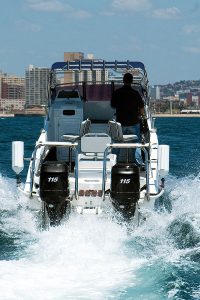 PERFORMANCE
As I’ve mentioned, she had a lot of vooma behind her, and the twin 115hp Mercury Optimax engines fitted with 3-blade 18-pitch stainless blade props had a lot of grunt. I can only imagine how she would perform if one fitted 17-pitch 4-blade stainless props.
The difference between stainless-steel and aluminium props is that stainless-steel doesn’t flex the way aluminium does when put under load. The negative aspect about the stainless props is that if they hit something in the water the props won’t break like aluminium ones would, but your engine gearbox will be damaged. But that’s why we take out extra insurance …
On this boat I could feel the power as she ran very proud and high in the water. To get her on to the plane I just had to push the throttle to halfway and she took off. I played a little with the trims and I could actually feel the resistance of the water’s surface on the hull decrease.
It’s amazing how the speed increases without opening the throttle any further when you trim up the engines and you get to the right setting.
The Gamefish 595 turned perfectly without any cavitation, and came out of turns very fast too. This makes her very suitable for surf launching. This also means her engines seem to be fitted correctly, and she made an effortless and perfect figure-of-eight when I tested her turning ability. I could not fault her performance at all.
Running head-on into the sea in conditions that were not that great, I found that when I reached my desired speed she handled the sea with ease, gliding smoothly over the water without that banging feeling that some boats get in the tunnel.
In the following sea, because she already runs bow-proud, you will have no problem with broaching.
Turning around and running with a side swell, I had no indication that she might roll. Her ride was very dry and I could not get her to throw any spray over the bow. When letting her drift or whilst slow trolling with her just in gear, she also felt very stable. 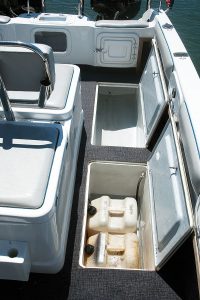 LAYOUT
The Gamefish 595’s layout was a little different to what I might have expected, because Natal Power Boats have decided to move the console a little further forward than is the norm. This creates a lot more deck area for fishing. All her electronics were flush-mounted which gave her a very sleek look.
There’s more than enough storage space in the bow, and that includes the anchor hatch. At hewr console she has two swivel seats, but personally I would have preferred two bum boxes. Of couse, this is simply a personal preference which I find more comfortable.
The boat is fitted with two fuel hatches — one on each side — that can accommodate three fuel cans each. Right behind that she has two huge fish hatches that would easily take some nice big fish.
In the false transom at the stern there are battery hatches on each side and a livebait well in the middle with a window on the front and a see-through lid. The 595 also has a water separator fitted on each side.
Lastly, she has a well-made stainless-steel T-top with sturdy rod holders at the top. I liked the layout, but Natal Power Boats are always happy to tweak things to the client’s requirements.

CONCLUSION
Over the years Natal Power Boats have grown from strength to strength. This addition to their range just further strengthens their position in the marketplace.
All in all, this is a very nicely put together boat. But that’s just my opinion, of course. As I’ve always said, if you’re really interested in a boat, take the time to make an appointment with the dealer and test the craft yourself. You wouldn’t buy a car without first test-driving it, would you? Buying a boat is a big investment, so make sure you get the right one first time.
Well done to Nick and Ruli and the rest of the team at Natal Power Boats — the Gamefish 595 is indeed a tremendous boat.