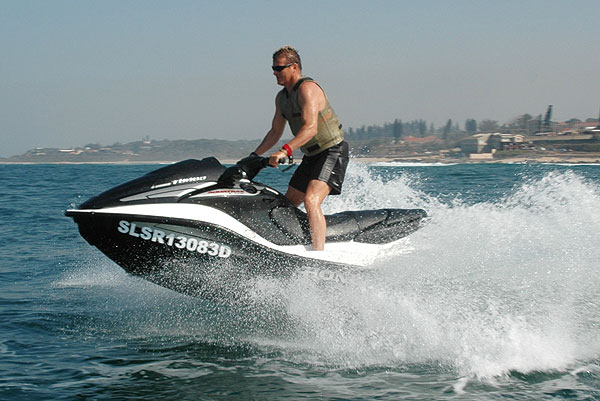 JETSKIS are becoming more and more popular by the day, and it’s quite noticeable how many ski-boat and paddleski fishermen have sold their craft and moved across to the world of jetskis.

I was recently asked to test the Honda Aquatrax 1200, and was really looking forward to the outing. When I saw the Aquatrax I could immediately tell she was a quality craft, but that was no surprise. After all, she’s part of the Honda stable, and quality is what we’ve come to expect from them.

My good friend and fishing partner Willie Schoeman had repeatedly told me I ought to try out the Honda Aquatrax and see what a great machine she is, so when I got my hands on one I invited Willie to come along down the KZN South Coast to Umkomaas to try out this silver bullet. He didn’t need much convincing …

Towing the Aquatrax from Durban to Umkomaas was effortless and behind the bakkie. Dropping her off the trailer on to the sand was also a cinch. I had thought it would take at least two people to push her into the water, so Willie and I had a chuckle when we felt how light she was and how easy it was to push her over the sand.
I decided to test her through the river mouth and out to sea to judge how she would handle the waves. We warmed her up in the river and then into the waves we went. 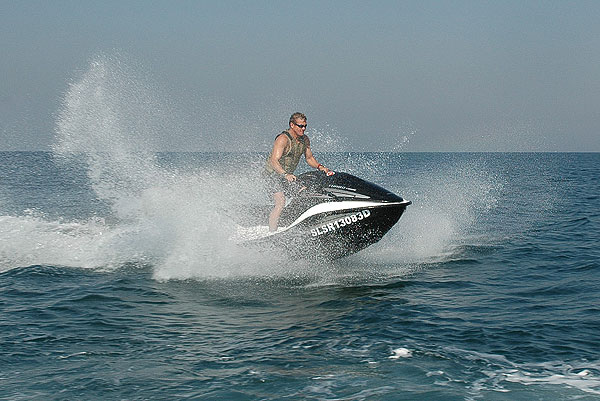 The prominent V-shaped hull of the Aquatrax certainly makes a difference when going through the surf, and she doesn’t jump as high out the water as a lot of other jetskis on the market. That means she gets into contact with the water surface much quicker and stays on it for longer. As a result, she accelerates faster and for longer than would the other craft that are airborne for longer.

Her turning ability is similar to that of other jetskis, but each craft has its own feel. In the beginning the Aquatrax did feel a bit strange, but the more time I spent on her, the more I got used to her. The bottom line? For the launch she was fast and easy to handle between the waves.
Out at sea it was a real pleasure to ride her. At full throttle she handles with ease and it feels like she is cutting through the swell instead of flying over it. The Aquatrax is very easy to get used to, and the more time you spend on her the more you’ll want to.
Willie slowed down to troll speed and once again I could not fault her stability and her ability to pull either Rapalas or a live- or deadbait.
Then it was time for the big test — to switch her off and just drift. This is one of the most important tests to subject her to. It’s imperative that the jetski remains stable when you sit with your legs to one side when, say, vertical jigging/dropshot fishing, fighting a fish and landing it while drifting. The Aquatrax passed with flying colours. 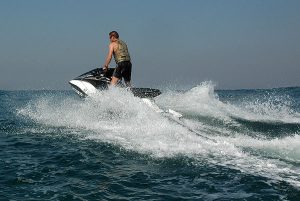 A big plus is that the Aquatrax 1200 comes fitted with GPScape — an integrated GPS system — so that you can mark your location or fishing spot, and can add waypoints to navigate to your fishing areas. This is a great advantage, because in addition to how much you save on buying the Aquatrax, you now save even more because it already has a built-in GPS system.
Storage is no problem either — she has a 10kg storage space in the front and a 3kg storage space at the back. If you feel that you might need more space, Honda is busy developing an extra compartment system with extra flotation that would be able to fit on to the side of the Aquatrax. This should be available before the end of the year. 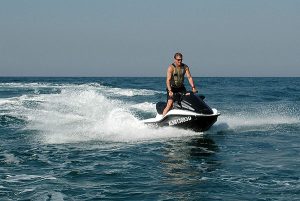 Overall, I can say with confidence that the Aquatrax is an awesome jetski that would be superb as a fishing craft.
Her overall weight is around 400kg, her length is 3.2m, her width is 1.2m, and her overall height is 1.060m. Her fuel capacity is 63 litres, but she is so light on fuel that you would have to go a long way to empty that tank.

The Aquatrax 1200 is one of the most affordable new four-stroke jetskis on the market, with a lot of extras that make the price even more reasonable. Although she’s only a 1200, do yourself a favour and test one of these craft on the water, even if it’s just on the dam. Be warned, though — once you’ve tested her you’ll want to buy one!